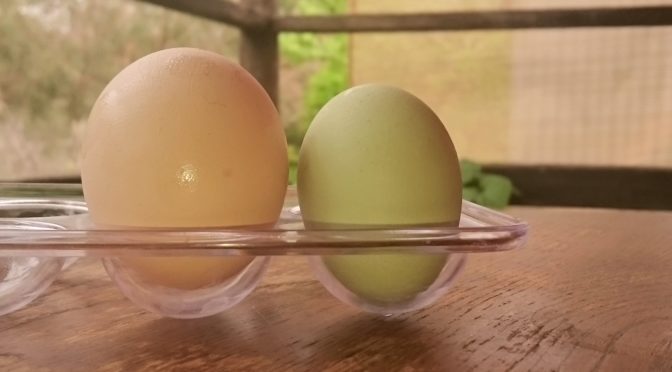 I think the image says it all. Ouch and she is not even our largest bird!

Last week both our youngest (8 months old) and our eldest chooks (+6 years old) laid eggs every single day.  Then the other 2 layers laid when the other didn’t, so we took 3 eggs every day!  21 eggs was slightly more than I planned for when we first got chooks.  I wasn’t expecting any of the rescue chooks to actually be laying eggs!  Stuart has started to exchange them at work for vegetable produce from a colleague’s garden.  He has way too much silver beet and can’t keep up with it, doesn’t want to throw it away and we can use it instead of spinach or other such greens because our veg plot is only just getting going.

So what else has been happening?  Well I have been able to get some pictures of some of the bird life around here which is currently talking to me quite loudly!  Mostly the Australian Ravens and the Galahs.  A pink and grey bird roughly the size of a wood dove.  They feed on roots of grasses killing lawns exceptionally well.  They also go around in very large flocks.  We, rather unusually, have quite a few of them here today squawking in the old eucalyptus tree not far from here.  Normally we only have a nesting pair or two.

The Wedge Tailed Eagle was back around today, but I wasn’t able to get any better pictures of it sadly. 🙁

What is probably the Grey Butcherbird I see most mornings finding a position on a branch in the sun in the lower paddock and hunting for prey.  Insects and small lizards, along with small birds are its main prey.

We have rather a lot of these parrots and whilst they are pretty, they are also a problem because they carry a lot of lice and will happily eat only a foot away from the chooks.  They are also very happy to enter the chook house and corner themselves where the chook feeder is.  As a result we have had to move over to an autofeeder which relies on the weight of the chook being heavier than the Rosella to allow the chook to feed.  Thankfully this means that the Rosellas only get the spilt grain (I don’t like that, throw it out policy the chooks seem to have) and not everything.  It has cut down on the amount of grain the chooks were getting through quite a lot.

They pretty much always go around in pairs the Eastern Rosella.  As you can see they have some wonderful colours yet despite those colours, they (currently) blend into the grass exceptionally well!  They are also very camera shy and disappear at the first sign of movement.

I often see this little fellow around.  He rarely stops still long enough to even focus the camera on let alone get a picture.  This is taken through a window (as with most of the pictures) and was a lucky shot.  He is the largest member of the Australian fantails.

We had a pair of them nesting in the workshop attached to t he carport and outdoor entertainment area.  I say ‘had’ because yesterday I spotted that instead of the usual 2 flying around and sitting on the electricity cables, there were 5.  I think their offspring have fledged!

This MBJ, OK I know it is usually a LBJ (little brown job) but this one is medium in size… and still unknown.  I’m working on it, still.

These are lovely little finches that are nesting not far from our laundry room window so I see them quite a bit but not usually this close.

This little beauty is the male Superb Fairy Wren and he gets around.
He had a harem during the winter of around 14 or 15 females!  I have no idea where they are all now, but I suspect they are scattered around in various nests around the place.  There is one such nest in the veg plot in the old honeysuckle (or at least what looks like one) so I wasn’t able to clean out all of the debris.  I thought I had a photo the female somewhere but I can’t seem to find it at the moment.
Perhaps I shall have to stalk out the veg plot tomorrow and see if I can get some better pictures?

Well, that rounds up the bird life, I think.  Perhaps tomorrow I will entertain you with some pictures of Stuart trying to garden with the help of the chooks!