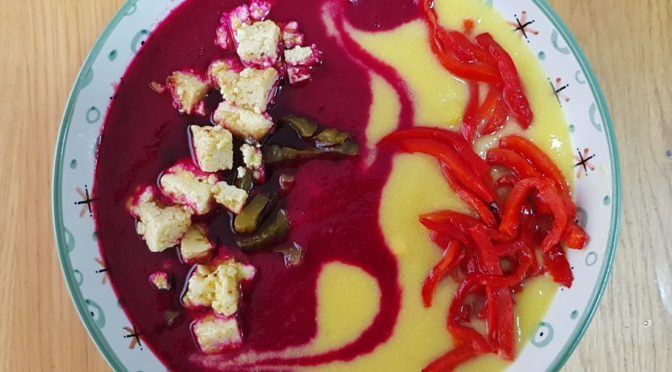 So I’m finally siting outside after 6 weeks (?) of not being able to even open a window or a door without a P2 mask or respirator on.

The air quality still isn’t brilliant, but it is better. It’s going to take a while before we have excellent air quality again. The bush fires are still burning and until we get significant rainfall, they are going to continue to do so. But today the wind is blowing from a different direction and for once the air purifier for inside the house isn’t going mad whenever a door is opened. NO2 has been the problem of recent PM2.5 and PM10 haven’t been as bad but they have been far from ideal. NO2 is associated with vehicle exhausts normally and innercity pollution but bushfires, forest fires etc are the original source of fossil fuels and thus also produce it. Nitrogen Dioxide (NO2) is a brown gas so it’s visible and also has been leaving both of us dizzy and generally out of breath. It is still around now, we’re just ignoring it, it is all we can do! 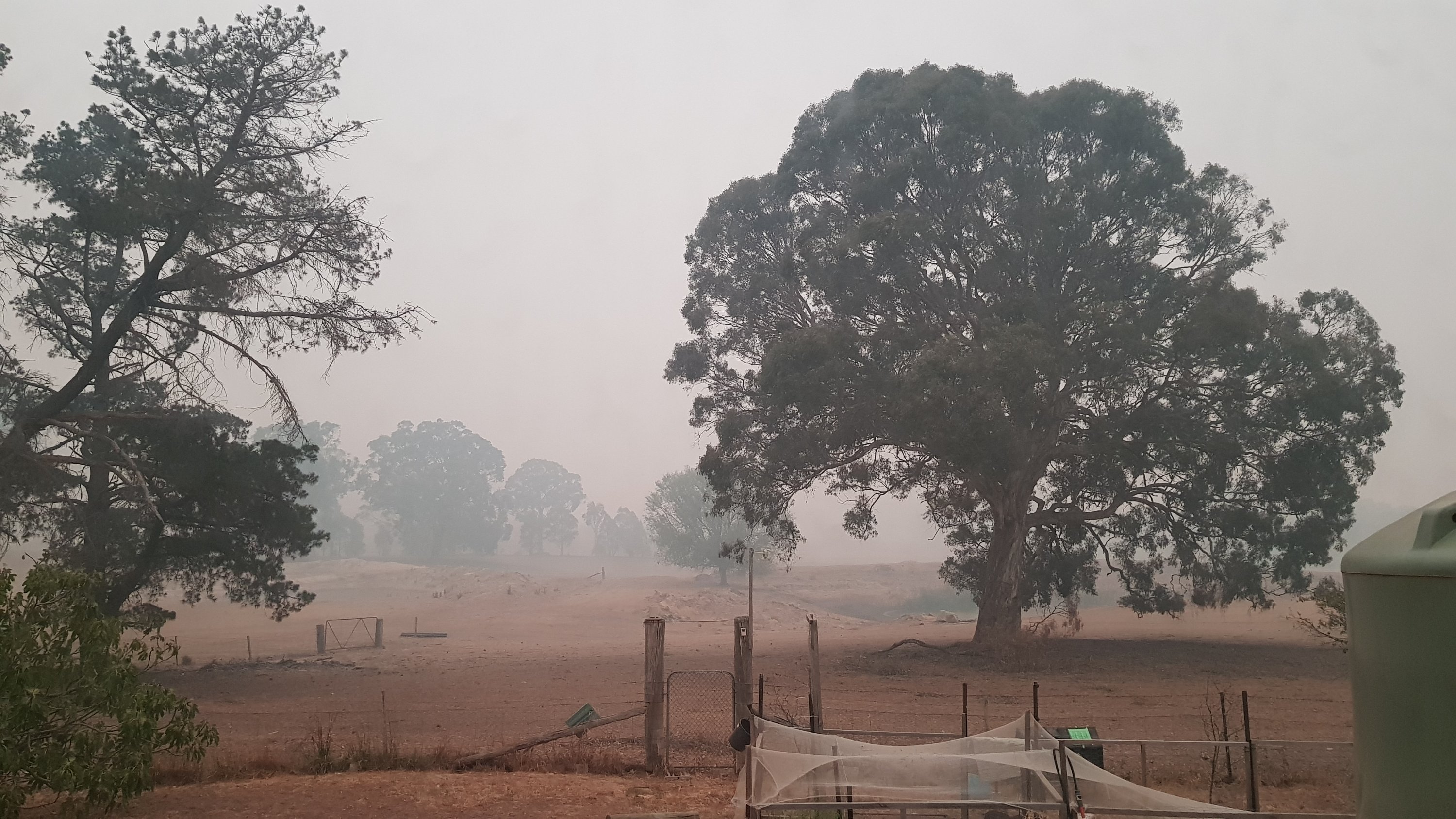 As you may have gathered, the drought hasn’t broken. In fact, its worse. Here we simply haven’t been getting the rain at all. Last month, December, we got less than 5mm in total for the month. To date, this month, we’ve had exactly 1mm of rain. Putting that into perspective, if the shearing shed was 30m by 15m, that 1mm of rain will have added only 450 liters of water to our water tank. So, given that thinktanks in NSW says that the average daily water consumption per person is 340 liters at have and another 150 liters at work, for Canberra residents, (https://www.rwcc.nsw.gov.au/save-water/average-water-use/), that’s not a lot of rain collected over the course of a mouth. It’s a good thing that we are masters at recycling water nowadays!

But all that said, I’ve had to let most things in the veg plot die sadly. Some things have hung on by the skin of their teeth, like the sweetcorn. But I doubt it will produce anything because it is very stunted and only just flowering. The sweet potatoes are in pots anyway, so get the occasional bit of help. The potatoes are struggling and also get help. The courgettes just gave up completely and died so after the 3rd attempt and failure, I also gave up on them but I do have one or two squash that are still fighting so they get watered from time to time and obviously we are doing what we can to keep the rhubarb alive. There are a couple of tomatoes that are alive and producing tomatoes though nothing like Grandad’s tomatoes! But I don’t have a greenhouse to start the plants off early in and protect them from the late frosts we get here. And no matter what I do, I always end up with long leggy plants with leaf curl! The grapevine is covered in grapes mind you and the new olive tree I bought to act as a pollinator for the other olive tree I have happens to have been pollinated when it was at the nursery and has a handful of immature olives on it! The poor lemon tree is really struggling though and any spare water is going its way. it has dropped so many leaves and lemons that it is mostly bare branches. And there is no apricot, apple or pear harvest at all this year. The fig trees also are hanging on, just. We may yet get a fig harvest from them because they fruit continually rather than like apples and pears that flower once and fruit once a year.

Right now the place is the same colour as the sky has been for weeks on end, brown. 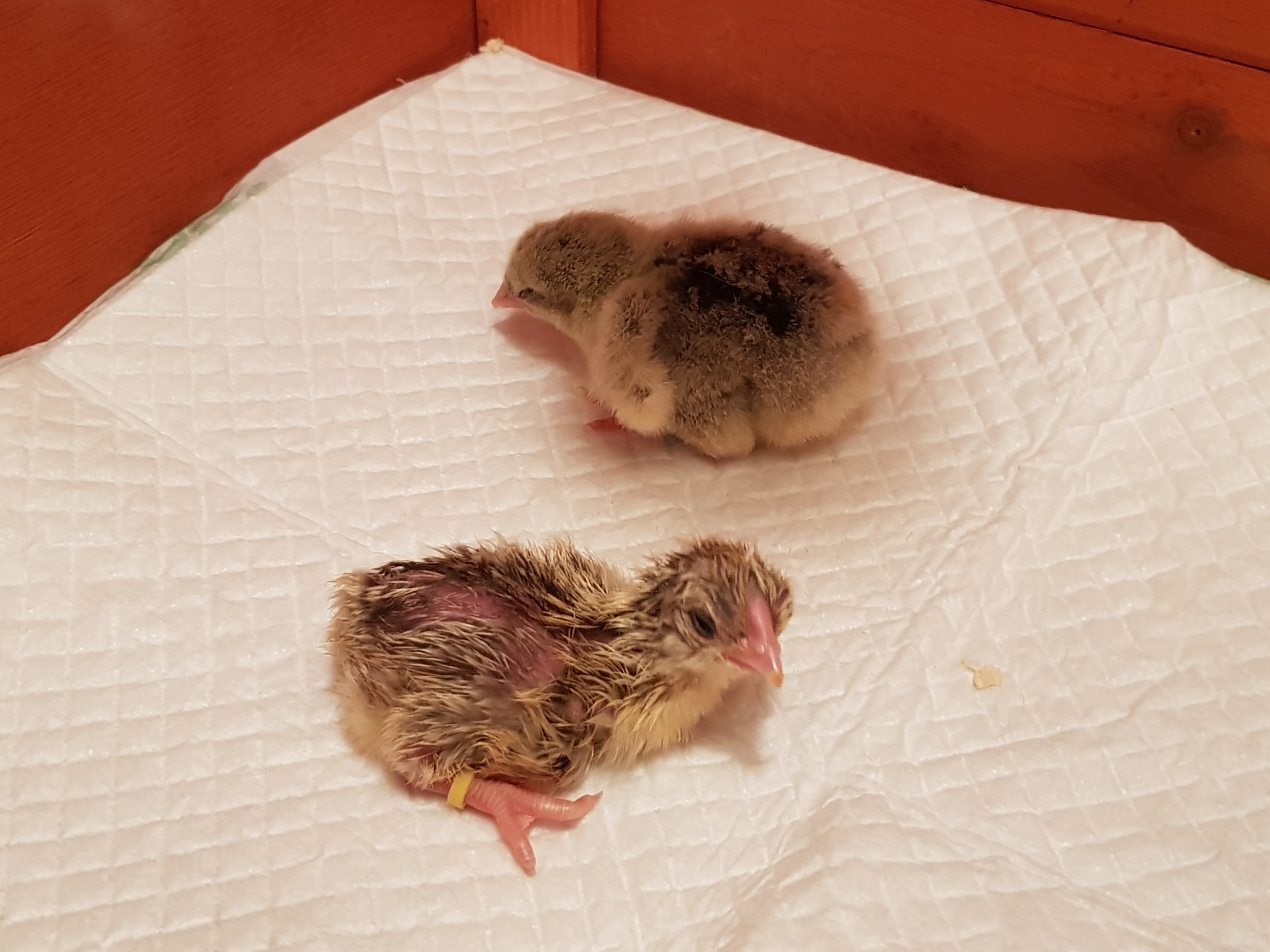 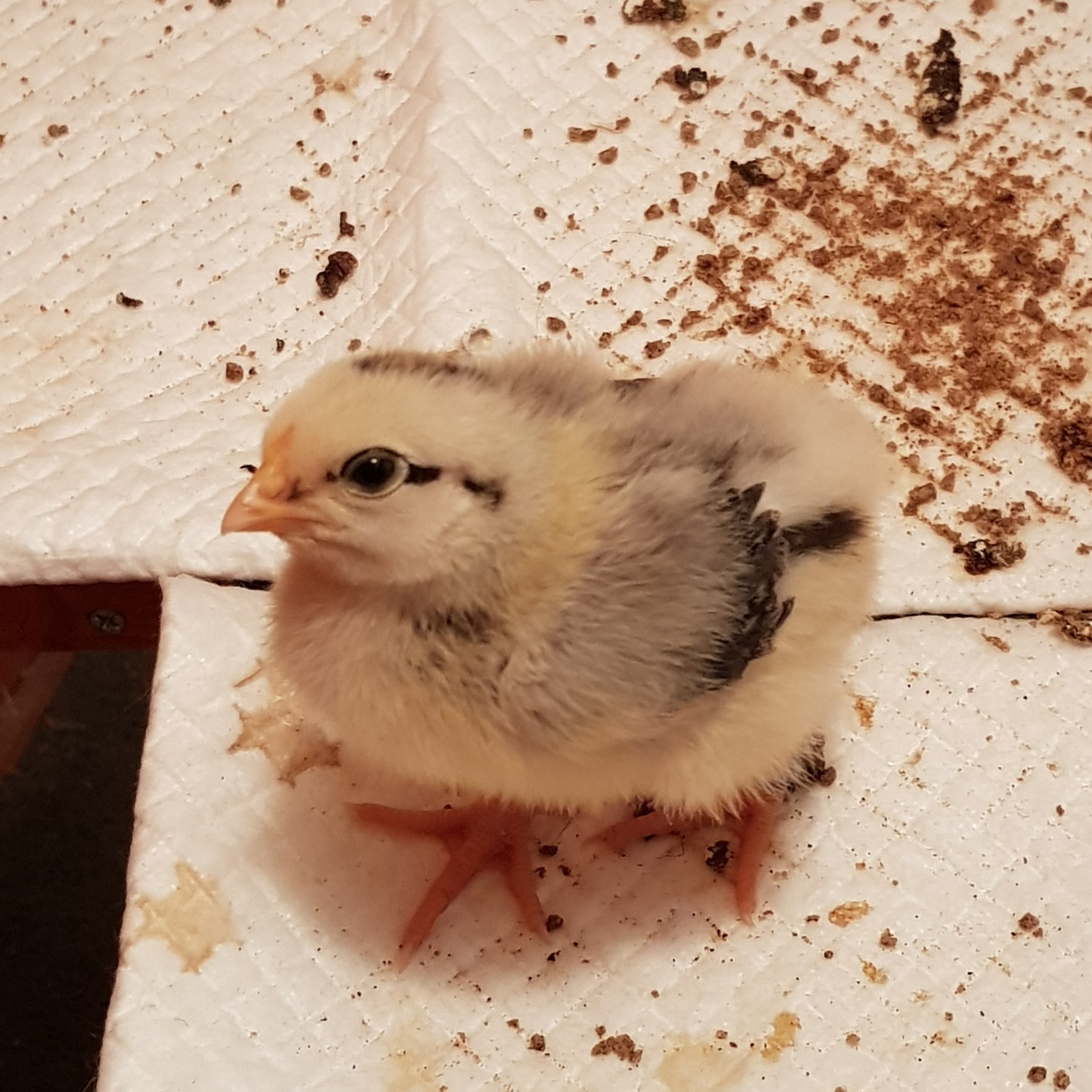 After many attempts at sitting on eggs (maybe 5 attempts) since the start of the season, we finally let our bantam (Stacey) sit on a clutch of eggs. But it was on the proviso that we were hand rearing the chicks because any chicks she raises are feral and you can’t even hand feed them let alone handle them. And I just don’t do feral chickens or bantams! In the end, she ended up on 2 clutches of eggs 1 week apart because I couldn’t bring myself to remove the growing 1 week old embryo’s that were crossbreeds (and not just between varieties of chicken but also between sizes). We were not expecting the eggs she sat on initially to be fertile, let alone develop but 3 of them did so we have some really odd combinations to come! One is an Old English Game bantam crossed with a standard sized Gold Lace Wyandotte. And 2 are a pencil laced Wyandotte bantam, crossed with a Standard Gold Laced Wyandotte. The 2nd clutch she was sitting on were purchased pure breed eggs and are bantam Silver Laced Wyandottes who are gorgeous little things! 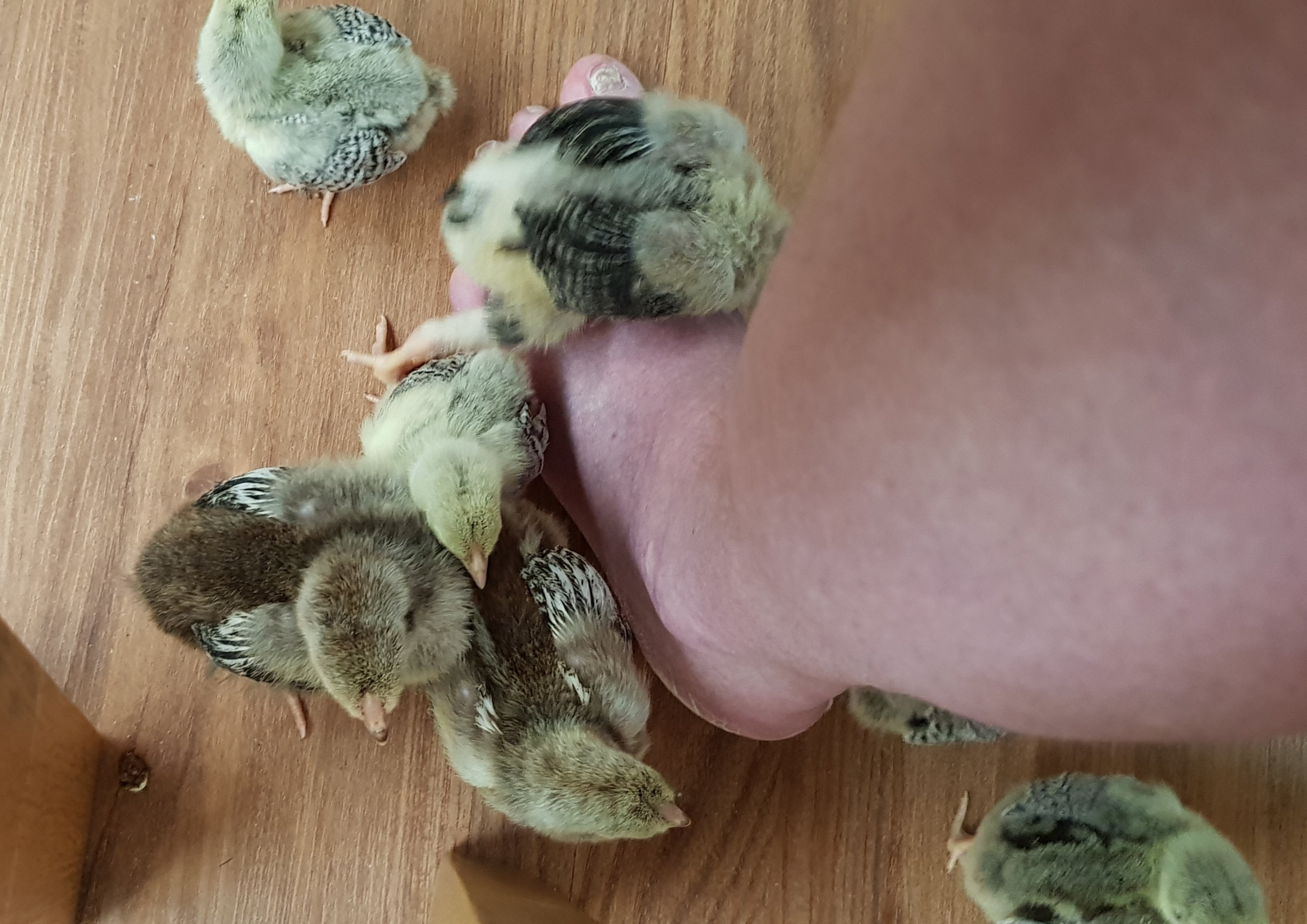 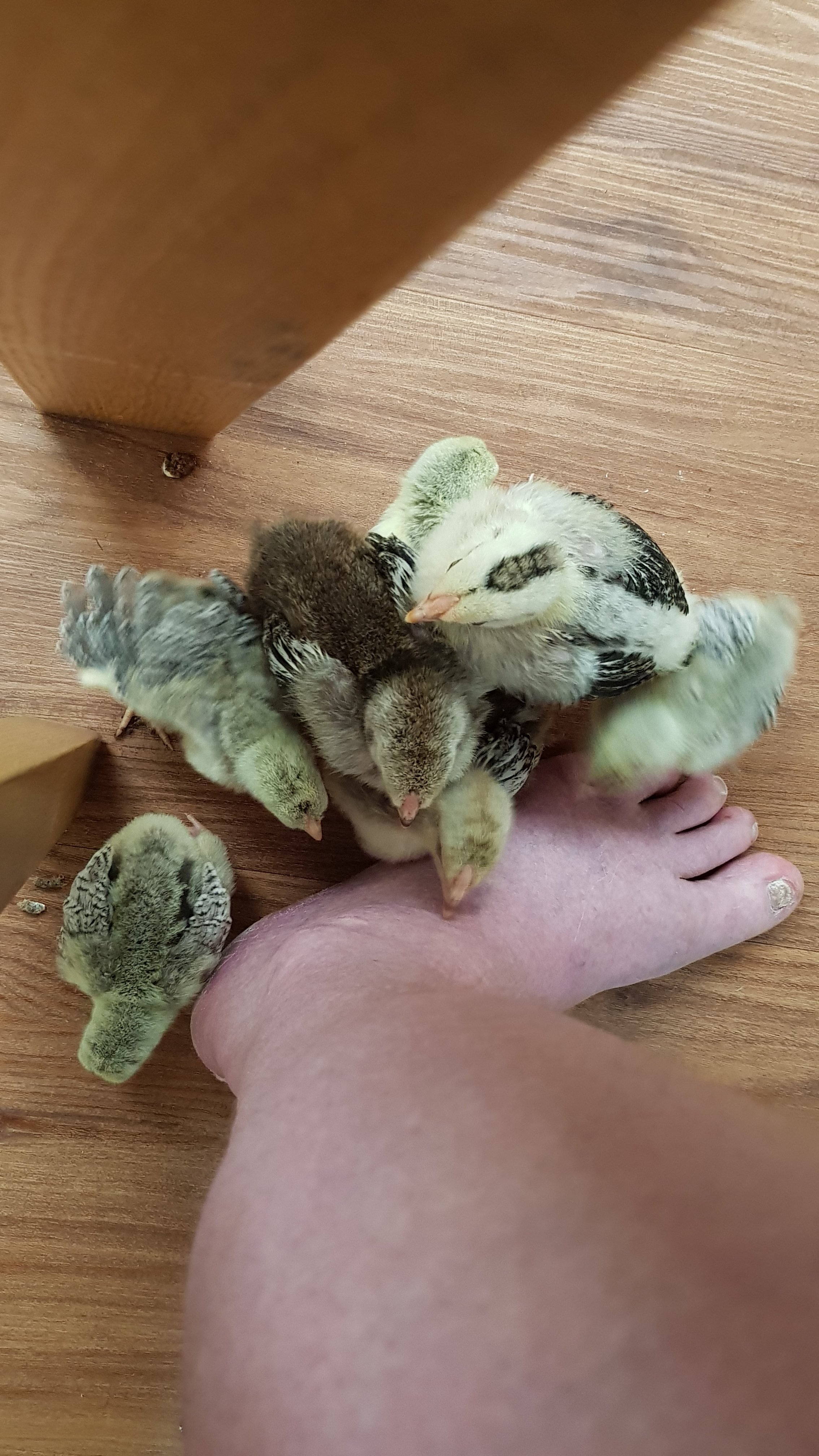 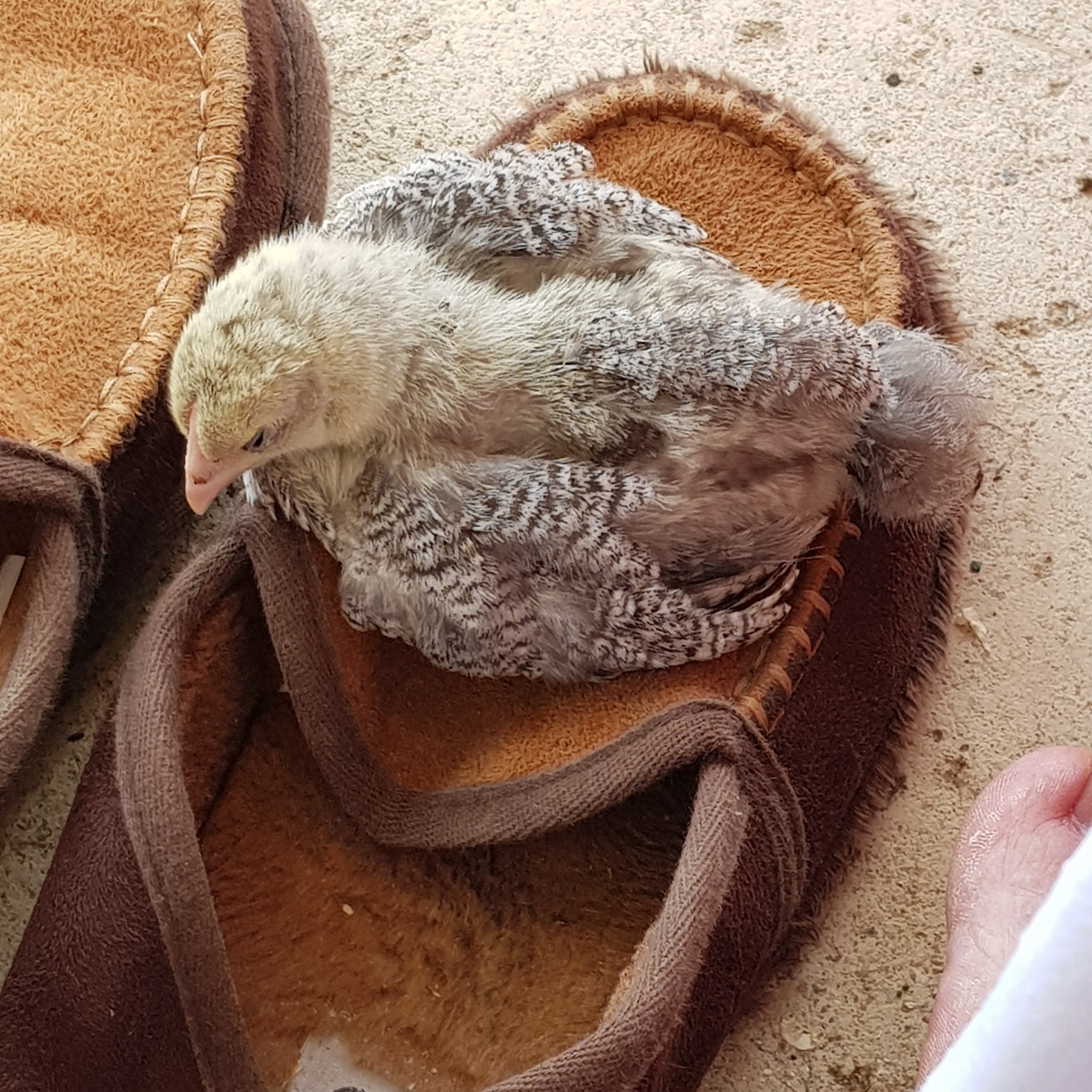 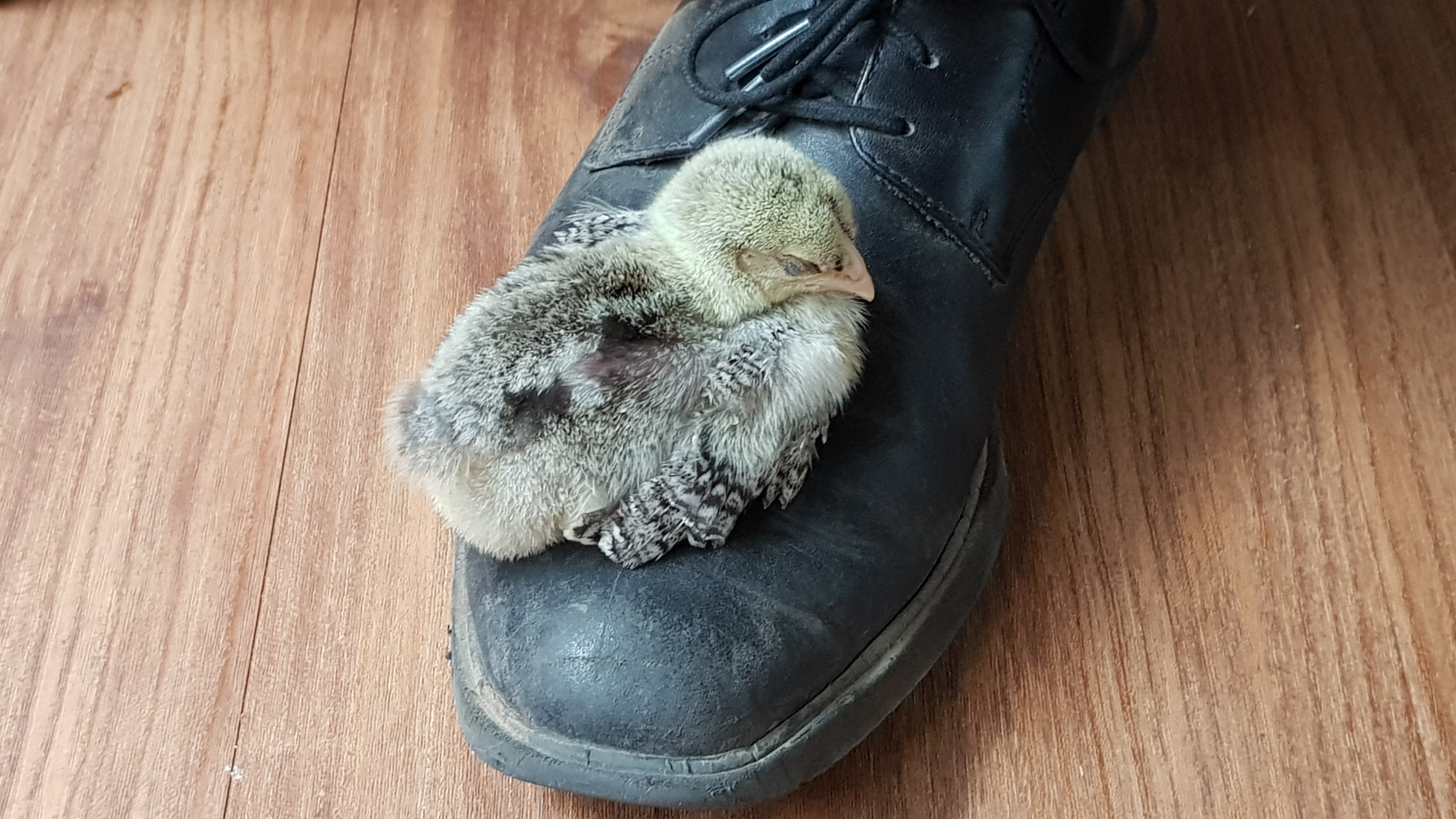 When you can’t go outside because of the bushfire smoke pollution, the only way of hand raising bantam chicks is for them to be inside. So for a while we had the bantam chicks running around like a herdof dinosaurs indoors whilst I hand raised them. Every now and again, you’d turn around to walk across the kitchen and not wanting to stand on this minature beasts, you’d shuffle your feet rather than lift them up off the ground, and you’d accidentally score a have goal with a chick as you superbly kicked it across the length of both the kitchen and dining room only for it to skid to a halt, right itself and came running right back at you! They still haven’t learnt but this weekend gone their cage was moved outside for a number of reasons not least of all the fact that I need to teach them that they are chickens albeit very small chickens, and not puppies or kittens…

2 other chickens were also allowed to sit on eggs. One of our Lavendar Sussexes had her 3rd or 4th attempt by which time we gave up and gave her eggs to sit on. She hatched 4 chicks, sadly we lost another 3 at hatching due to the weather conditions, and then we ended up with another 2 (free) chicks off the lady who I purchased the eggs from. Pebbles, did a really good job on raising the chicks for 3 weeks then decided motherhood wasn’t all it was cracked up to be and quit. The chicks were by then pretty independant and as a pack/gang of 6 are fine by themselves. Finally, Speckles, our Speckled Sussex, hatch just 3 chicks last weekend and so far is doing great with them.

The only other excitement has been the arrival of our new sofas. Yes plural. We decided we didn’t like the three seater sofa we had and when Stuart was diagnosed with osteoarthritis, we started looking at recliners because he has to keep his feet raised when he’s sitting down, now. Plus I wasn’t finding the fit or softness of the existing sofa suited my back and had taken to avoiding sitting on the sofa at all. So we now have 2×2 seater sofas and a single chair. with them being a custom order, I needed to think about what we might need as well as what we currently need. They were ordered back in October and arrived just this week. Unfortunatly, they didn’t do any bright cheerful colours in the fabric covers (only in the leather covers which I won’t have), so we went light and are now adding colour with cushions which is almost as challenging because we like the rectangular cushions but currently their covers are all boring. So I now have 5 bright red square cushions that add colour and probably won’t get used as anything except decoration. 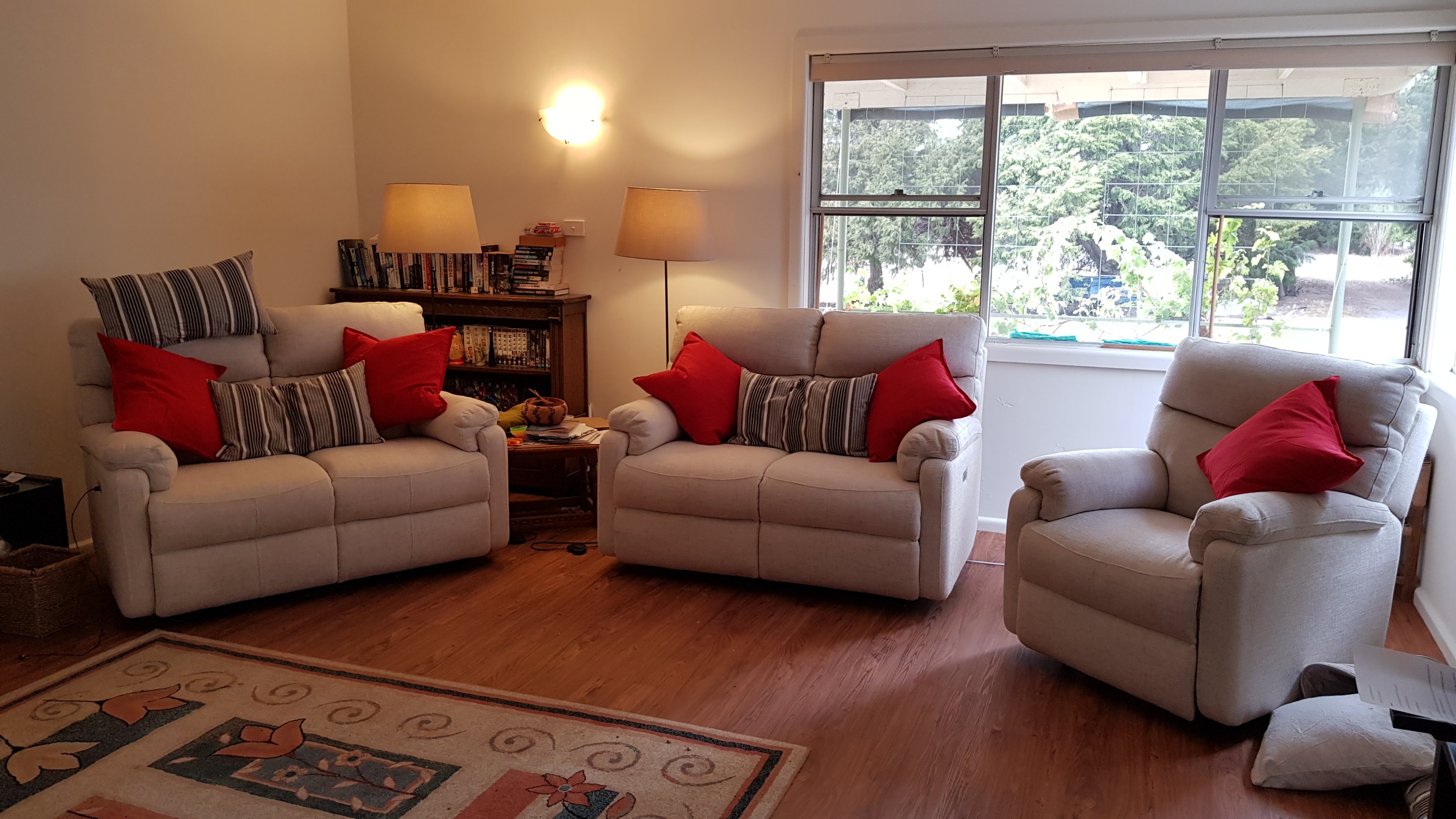 And we’ve gone Australian.The old 3 seater which is still in excellent condition along with its foot stool and single seated chair are now on the veranda. We may donate some or all to the bushfire charities to help those who have lost their hermes, but for the moment, they are on the veranda covered with many sheets and throws so we can sit out in the evening or first thing in the morning if the air quality permits.

We’ve been ‘playing’ with trying out cold soups because it has been too hot to eat anything hot (thermally or spicy) or anything “filling”.

One or two other nice but cool dishes have included

And finally a treat for breakfast over the weekend, which should need no introduction. Pikelets. 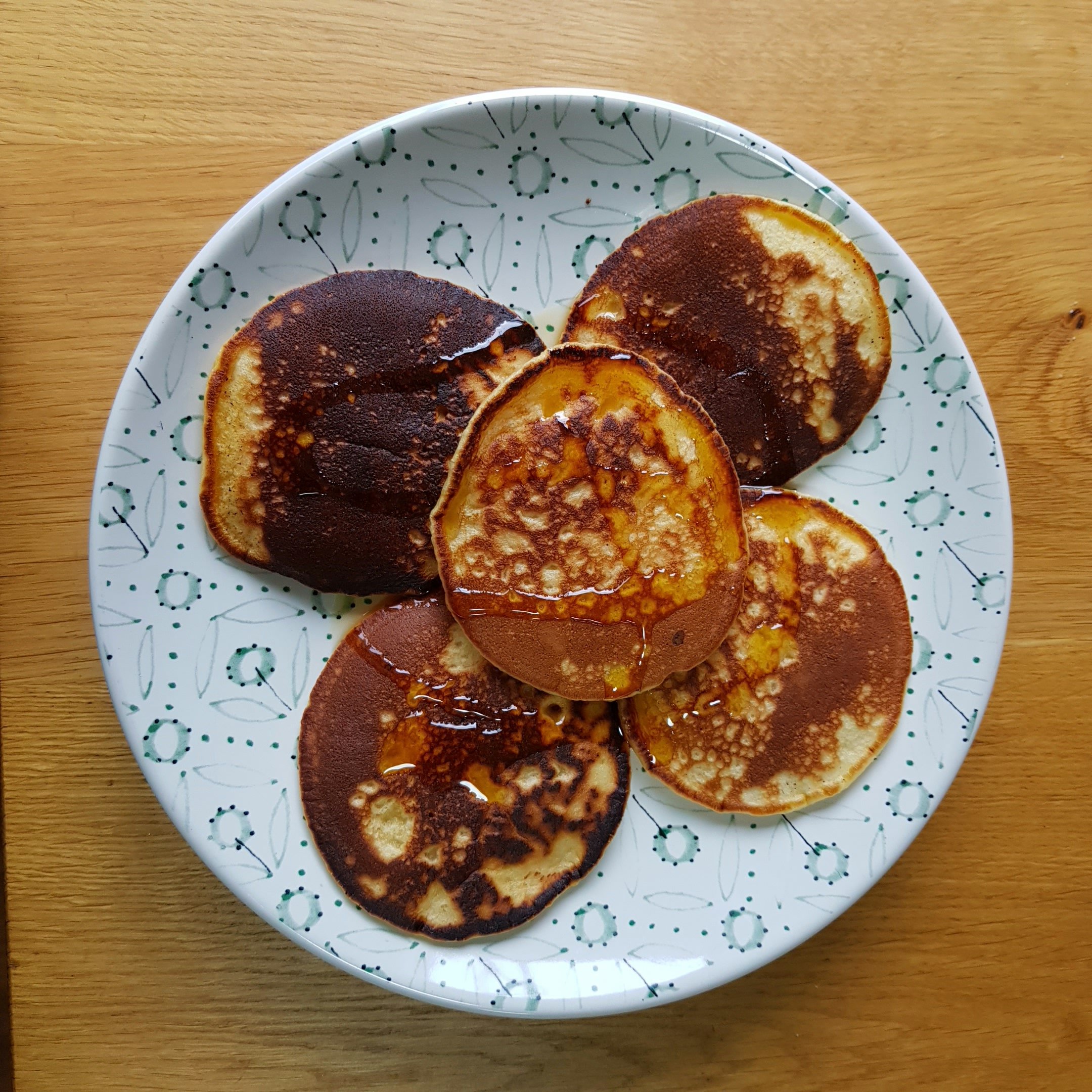 I’ve also managed to obtain for free a brand new, unused Pasta maker which has been used with varying degrees of success, several times now. 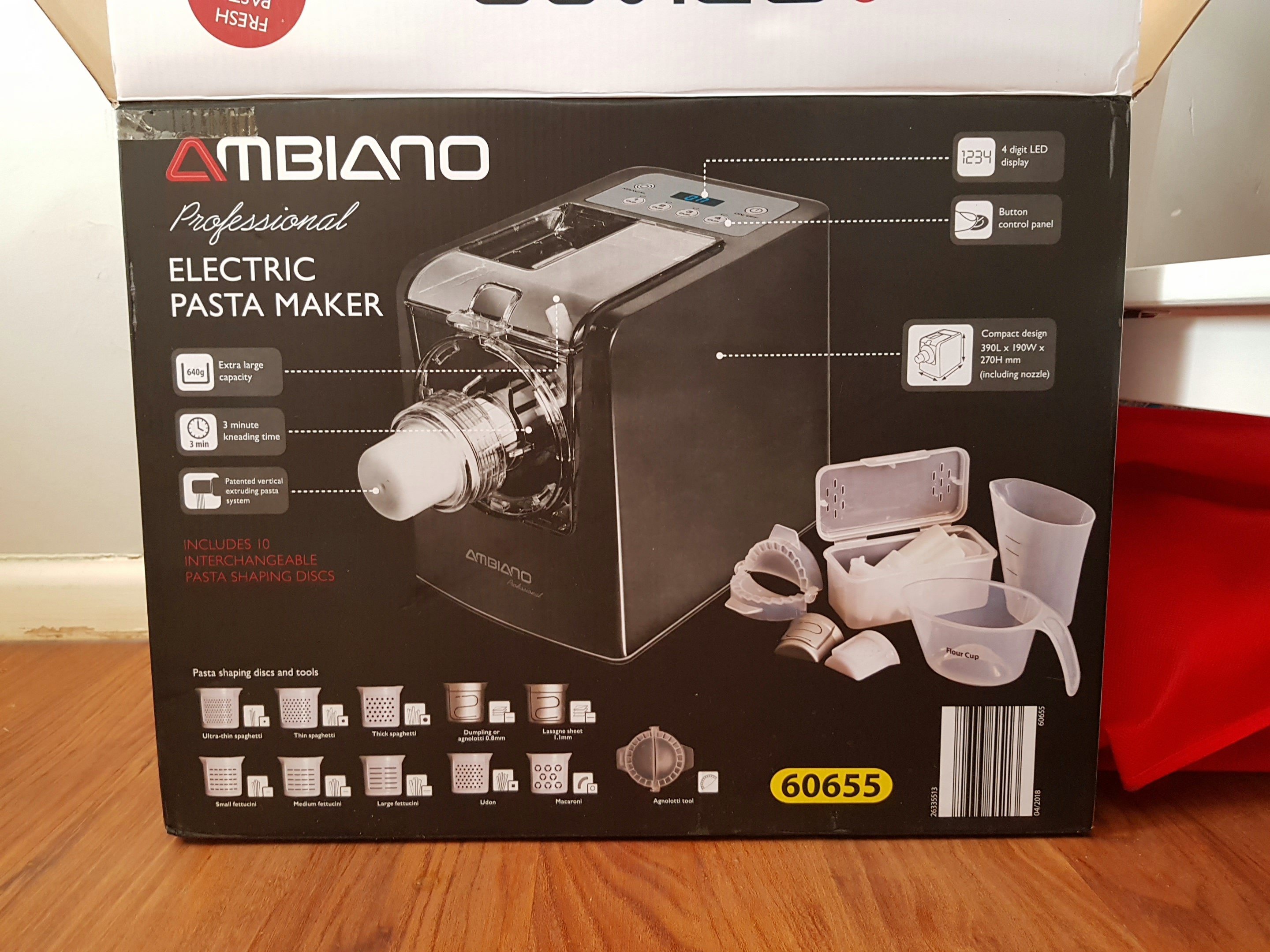 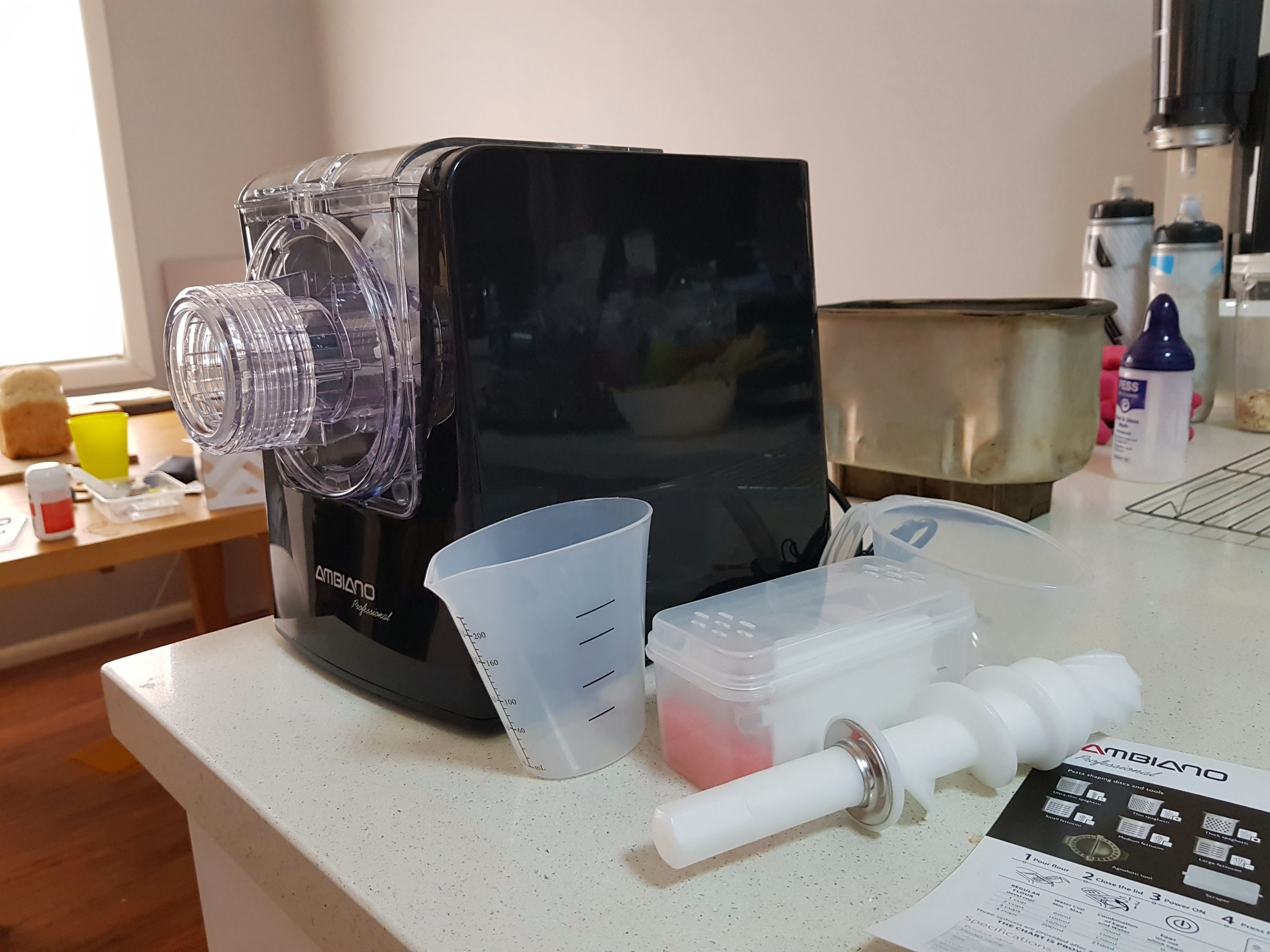 And finally a Christmas present has been completed for it to join last year’s. 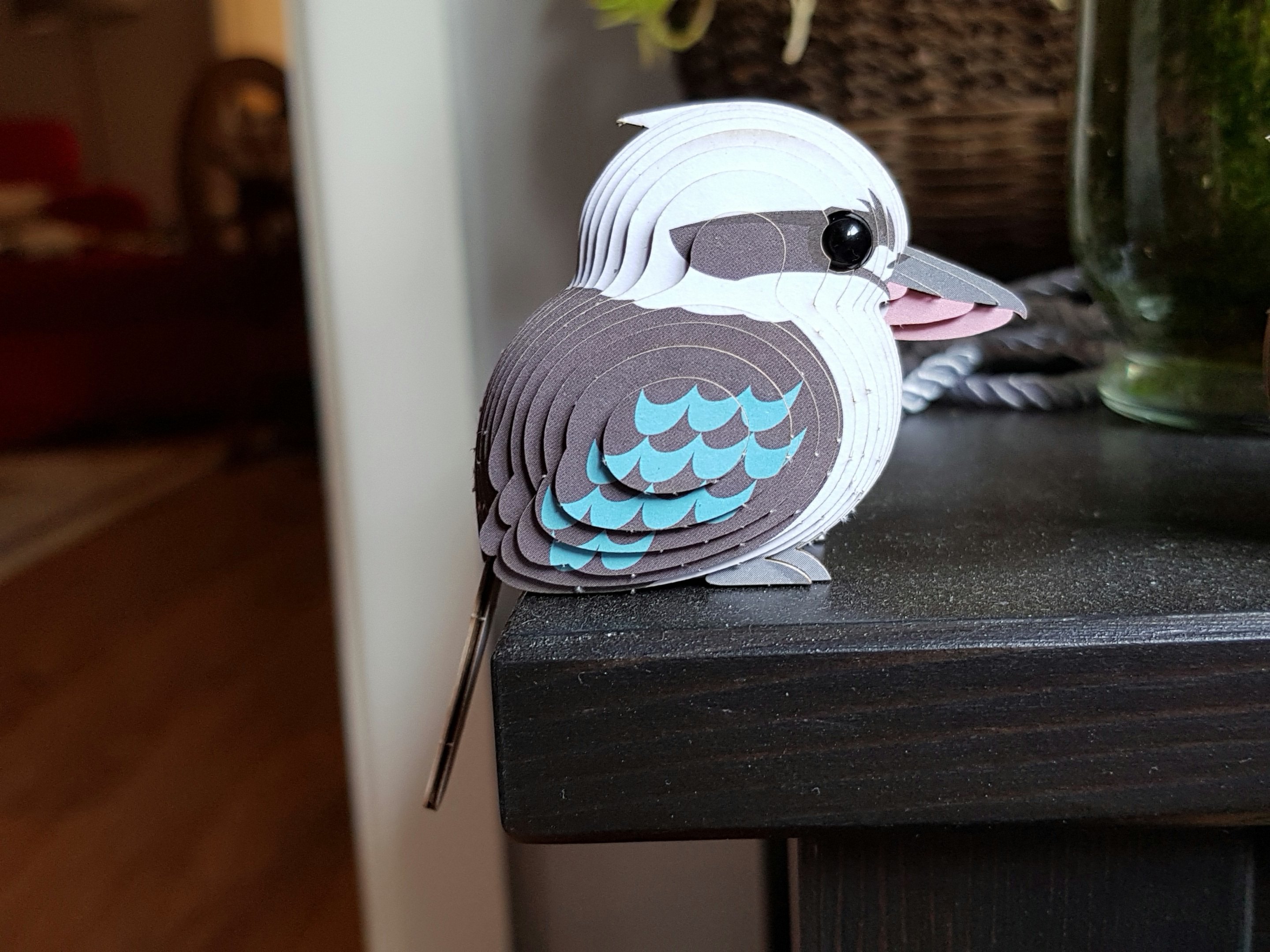 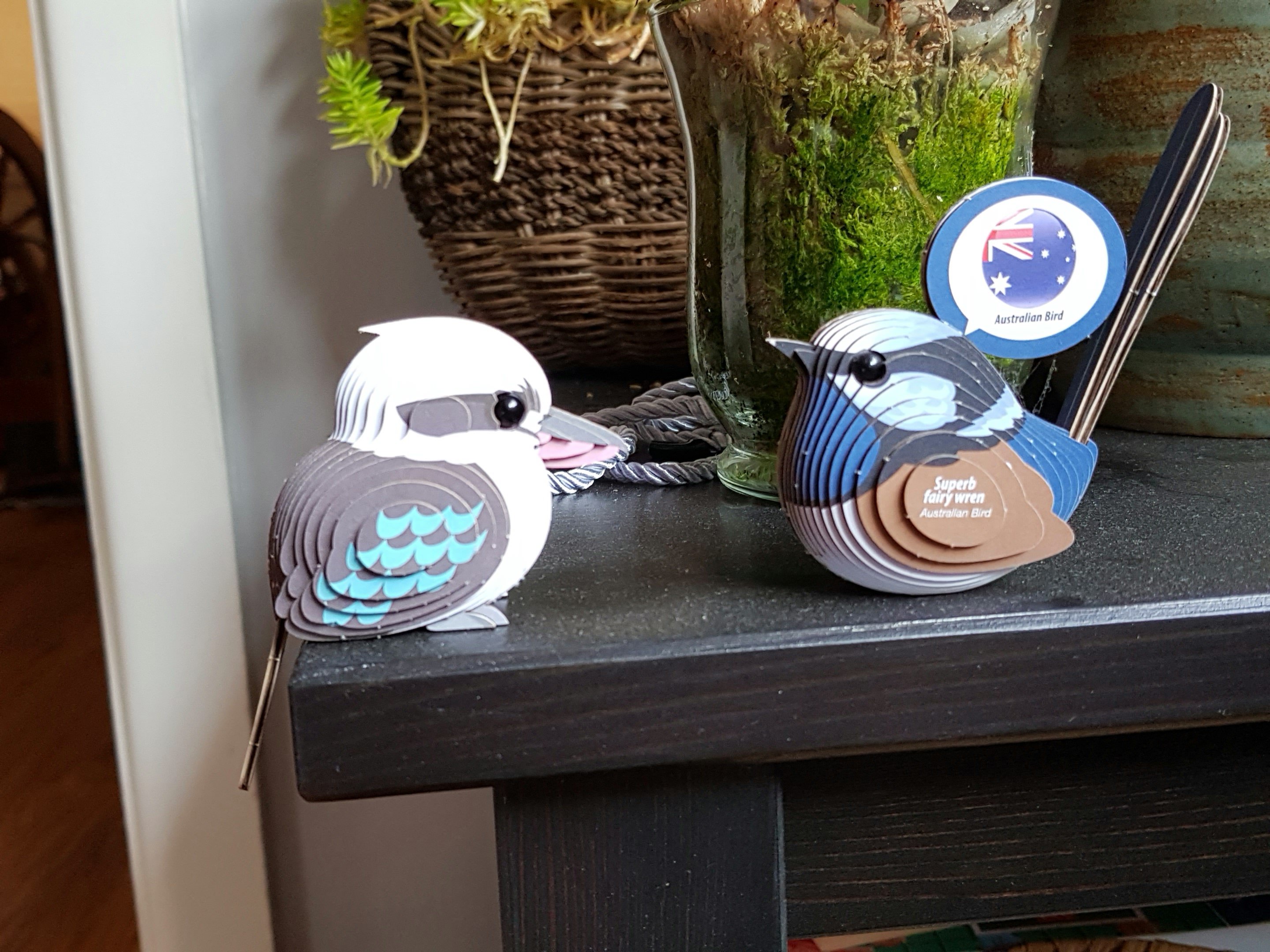