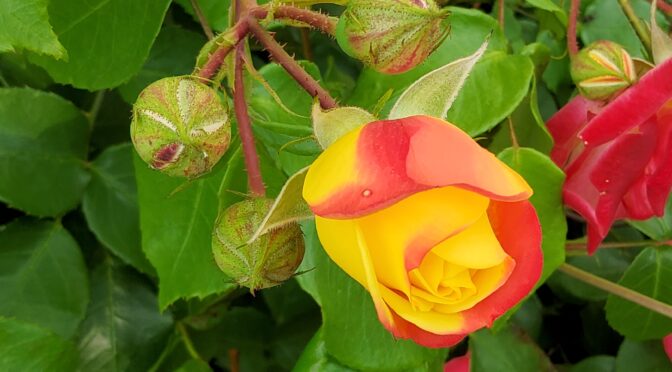 and so much has changed. We are back to the cold mornings but hot days. Mornings where you need the fire for about an hour or two but no longer. Which means you just put on a layer and cope. it won’t be long before 8am arrives and it is already short sleeves weather.

By 8am it is too warm to be in the sun. It is already burning you (assuming it is not one of the days that starts off foggy of course). By 8:30am, the UV warning is already on red alert and will stay that way all day.

The lovely yellow rose that is usually a mass of tiny yellow flowers with the most amazing fragrance fell victim to one of those 4°C mornings and didn’t flower. It was may be one day off flowering. So we have taken advantage of this late frost and cut it all the way back leaving only a few main branches roughly 50 cm high. We’ve finally found its roots literally, and the main stem has a diameter of nearly 1 foot. It is very old.

The other roses (the camelia rose) are later and longer flowering, so whist they were in bud, they were not showing any colour and nowhere near flowering when we had that late frost only 10 days ago. Both of them, sorry, all 3 of them, are now in full flower and so laden with petals that they are bent double and touching the ground. When we get the chance, we will cut them back as far as possible as well.

The same applies to the grapevine. It is a mass of buds and leaves and only this morning I have cut off all of the branches/stems that don’t have buds/grapes on them and those that do have been cut back to 1 leaf joint before the first bud/grapes. We are still trying to work out if we missed it flowering. If only the leaves removed were bigger, I would blanche them and preserve them to use in cooking!

The fushia was going to also get a ” hair cut” but we believe we have an Eastern Spinebill (nectar feeding bird) nesting in it, so it will have to wait until a better time.

The 5 chicks we got at the end of August are almost bigger than our smallest chickens. But it will be many months yet before they come to lay. It is hard to realise that they are still only less than 12 weeks old and with heritage breeds, they don’t normally start to lay until they are 40 weeks old! But that is one of the reasons that they lay for longer and live to between 8-12 years. Talking of which, one of our girls is now starting her 7th full season. We don’t know when she was hatched, but she came to us 4 years ago at the end of her breeding life. In other words, no longer of financial value to a breeder because she wasn’t laying enough quality eggs to hatch. She’s surprised us by getting through another winter as top chook, so she’s still strong enough to hold that spot in flock. But sadly we lost 2 chooks over winter. One came as no surprise but the other was.

It has also rained and rained and… flooded us out several times now. Well the garden has been standing water. Sadly this has mostly been in areas we didn’t want, such as the chicks’ enclosure.

We’re due more rain this weekend and into next week.

Finally, a surprise. Perhaps I should have left the cooking to Stuart around the time we moved out here over 4 years ago.

But he definitely needs a lot more practice. The burger was barely warm and ended up in the microwave. 2nd time around was not much warmer. However, it is the heat that has him out of the kitchen. He decided it was too warm to be cooking in there and summer has not even arrived yet.

One thought on “A month has passed ….”