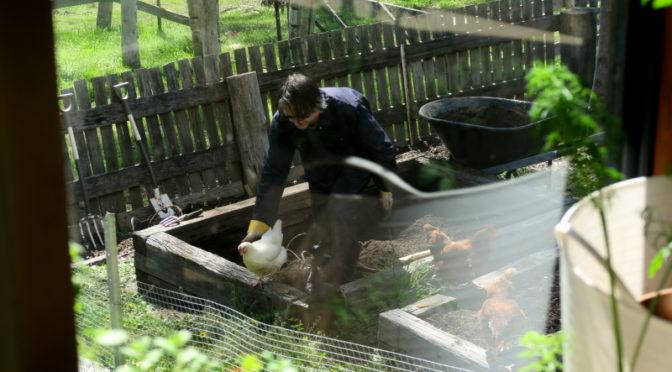 Yep, an interesting mix at the best of time, is my husband and gardening.  He can’t tell a weed from a well, something I actually want.  After all the definition of a weed is any plant growing where it is not wanted and well, if you tell him to pull up all the weeds of this type and he sees something else he knows is a weed (like a nettle for instance) he will ignore the nettle and not actually remove that as well… So I have to think carefully as to how to phrase things and assign him tasks in the garden.  “Remove every living thing in this patch of land” works well, brilliantly if and only if you want everything removed, except of course roots.  That is fine when you are digging over a veg plot for the first time and have time to sit and remove the roots yourself, but afterwards, perhaps you want the carrot seedlings to survive, or maybe the spinach should be left in the soil? So there are only so many tasks in the garden you can assign him.

Cutting the ‘grass’ is one of them.  We have plenty of ‘grass’ growing and I use it in quotes because where the lawn is, is anything but grass.  In fact the lawn is mostly Cape Daisies which look fabulous in flower and they flower exceptionally well, but they don’t make a very good lawn.  In fact they are actually considered to be a weed and in some states are a noxious weed (one which has to be reported and sprayed to be killed).  Here, however, they are just a weed and well, they are our lawn.  Now other areas of the garden, not usually considered to be a lawn, such as the paddocks, the areas grazed by the ‘roos and well everywhere except where we want grass has an exceptionally fine looking lot of grass growing there.  I am considering a grass transplant at some point.  In the meantime, digging up daisies has become a favoured human occupation in the eyes of the chooks.  Daisies after all have this root system that holds moisture in which means that worms live in there in their numbers.  The leaves form a matt which blankets the ground around the daisies and kills everything else, and also holds down moisture.  And on top of that, the chooks actually like eating the leaves, the bees , hoverflies and butterflies love the flowers and it is great for the environment, but they make for a lousy lawn.

So a few weeks ago, I asked Stuart to sort out the big tree roots in veg plot 4 as it has been called.  All of these raised veg plots were already here, so it was a reasonably easy instruction.  Kill anything alive in there, dig out the lining (crumbling and not looking like something we want), dig down to the bed rock (between 6 inches and a foot down) and remove all roots, rocks and stones.  Move the soil to veg plot 3.  It was missing rather a lot of soil at that point (all of them were, so as we dig one out, we top up the soil in the other one.  Veg plot 5 will get fresh from somewhere (?) and some good fertisliser so that it can grow the squash and courgettes I want to grow in it. At least that was the theory…)  The squash and courgettes have had to be potted on and some planted out because of the time frames taken to get anything done recently and because of the speed that the plants are growing since the sun decided to actually show itself and show that it can warm life up a touch here!

Now, Stuart rather likes feeding the chooks and if you don’t let them in when you are digging in the garden, at least 2 of them can and will find their way in (up and over the fence if they are hungry enough), and given we are trying hard to make friends with HP and tame him to make catching and/or handling him easier, feeding his girls in front of him makes sense.  And so I watched this scene unfold whilst trying to write a page of this blog two weekends ago… <whistles to herself>

<now giggling too hard to carry on photoing the situation and wondering if he has actually seen me yet>  I promise I will continue to try to get some of these photos.  It is even more fun when Stuart walks around with the spade.  In fact the only way to get any work done in the garden is now to employ a 2 person tactic.  One person works in one place getting the actual work done whilst the other distracts the chooks with the fork digging up daisies and generally making a mess of the garden and leaving holes for a certain person to fall down during the week… yeh.

If you don’t employ this tactic, then the outcome is noisy.  Half the flock leave the outer enclosure of their own accord and come and join you and inspect your work for edibles squawking happily that they have a) escaped, b) found you, c) found edibles and finally d) eaten then…. oh, I forgot e), they want more.  Meanwhile the other half of the flock that can’t (yet?) escape of their own accord squawk loudly complaining that a) they are not in on it, b) the flock should feed together, c) they are still here and d) THEY ARE NOT GETTING FED…. so it is easy just to let the all out and concede defeat gracefully.

Once they have fed, you get this…

I don’t envy a rooster.  They have a hard life, if indeed they are allowed to live that is.  First of all they are up at astronomical dawn which is roughly an hour before nautical dawn and anything that a human wants to here… so currently 4:15am… grab some mouthfuls of grain between announcing to the world it is light and time to feed.  After all the early bird catches the …. yeh, a cold currently !
Then they get little thanks ensuring that all of their flock gets to eat and lay, they have to stalk their ‘prey’ silently from behind and pounce to get their own way.  Miss that foot placement or don’t grab the neck in exactly the right place and the deal is off… and the flock watches on for the next victim.  It isn’t me so I’m not going to say anything… then when they have fed and preened he can feed a little more on the stuff they didn’t like and have left, so never any treats or any of the nice stuff… then when he does find something that he likes, he either has to be rude and wolf it down or more often be the gentleman and call that he has found food and pray that they don’t all charge him down in the rush to spot it.  Of course that is assuming that they recognise that he thinks it is edible because he has come from somewhere else and what gets eaten there is not what this crowd happen to like… Then he has to patiently point it out and wait for someone to try it and eat it… so he gets nothing.  This goes on all day.  And when they are fed and watered, washed and bathed, coated in dust repeatedly and filthy from head to foot, it is now time for them to snooze in the shade whilst he watches over them.  When they are hungry again, he is either off foraging, taking them to the best spots (well hoping they are the best spots because they have been here longer and know their way around better than he does and have explored further afield).  He also has to come to the veranda and announce that they need feeding – oh I kid not.  This happens repeatedly, even if there is feed down (grain by the door along with fresh water) but only when I’m home.  He has to stand and watch them eat it, and any spare he may get if he is quick enough before they want to go elsewhere and separate.  Feed too long and he loses track of them all and they split up and …. finally when it is time to go back down to the outer enclosure he has to decide if it is time or am I too early.  Their response is follow the person with the food container (it doesn’t necessarily have to have food in it!) he does not always come.  But he has to follow them and so on.  He can at this point, however, balance on the railing in the middle whilst trying to preen himself in the sun… it is rather funny watching this manoeuvre when he tries his tummy without falling off…  and finally when it comes times to roost, there are the territory and position fights to be sorted out.  The pecking order has to be maintained and enforced.  The no fighting rule enforced with fighting if necessary… and then there is his favourite to make sure he is alongside and can tuck his beck under her wing before roosting for a few hours.  Or trying to because there are these pesky humans that then come down and try to handle them and coat them all in this off brown coloured powder that stays on you all night until the morning because now it is too late in the day to object or go and have a dust bath to get rid of it and too late in the day for a really good shake, so you just have to accept that it is there and roost anyway.  Which is worse, the powder or the handling…?  Something to dwell on whilst he stands and sleeps and guards the flock from 8pm until 4am when it all starts again.