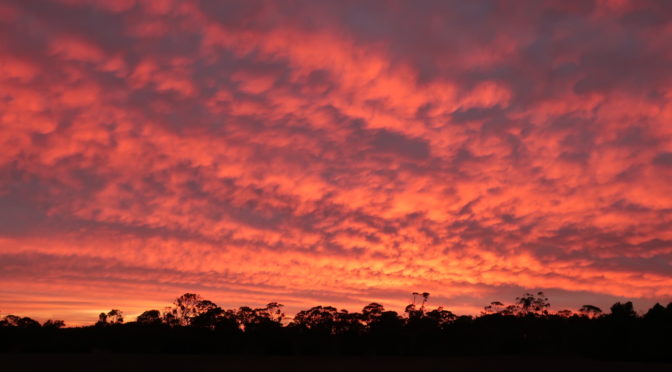 Each morning I look out of the bedroom window at the eastern horizon and check for clouds. More often than not, there are none. But just every now and again I’m in for a good sunrise and often you can tell from the word go. But I have to go outside to get the best pictures because of the flyscreens on every window.

Currently, I think the best spot depends on if I want the whole horizon or just a small part of it in the photo. And currently we are going through a period of settled weather where it is simply cold and clear, but a change is coming because every afternoon it clouds over. Not completely but just a touch. It doesn’t stay long, but by dawn the humidity is higher than my weather station will read and sometimes it is foggy below us. Other times there are a few clouds and one morning this week was exactly that. A few clouds on the eastern horizon. And what a wonderful sunrise it was.

Just the faintest of glimmers on the horizon, but it promises to be a great sunrise.

A few moments later and it is getting lighter and better.

That was just one area of the sky.  As you can see it was a stunning sunrise and worth every minute of standing out in the cold (it was around freezing) and watching it.

Watching the sunrise in another part of the sky, gave this series of wonderful pictures.  The changes start off subtle, but then suddenly explode into life and finally fade away even more quickly than they arrived.  Within 20 minutes the whole thing, from the faintest of glimmers to all colour being lost and day break arriving, is over.

This one was promising to be a beauty!

Suddenly the sky explodes into this amazing set of colours.  So vivid it was hard to know where to photograph next!  Zooming in always emphasises the colours because you have nothing to compare it to, but is also the best way of looking at the clouds.

From afar you can really get a sense of the scale of the sunrise.  Almost the entire sky was lighting up, but at the same time, you kind of already knew that it was almost over!

And there you go, you can see it fading already.  And whilst the colours are sometimes better for photographs and much more the sort of colours people want on their walls if the photographs were ever to make it there, the drama of the event would be lost.

Finally, from afar, you can see the drama.

Even looking to the North and round to the west (yes, west where the sun normally sets) you can see the colours in the sky.

And then it has gone.  Back to normal daylight and inside for breakfast before I get cold.  A distant memory, but for the photographs on the camera.

Sunsets.
I hear you.  What about those?  Well the truth is that there is a hill in the way so it has to be a really good sunset to be seen.  But at the moment the sun is also setting just at the point when I am outside locking up the chooks for the night, so I do get to see if there is anything, but often don’t have a camera handy.  I know I really should remember to keep on in my pocket at all times, but every now and again, I am elsewhere and I do get to see the sunset.  And this was one that was more dramatic clouds than colours, but it was worth adding here anyhow.

Now we are going away for a few days this week, Monday – Wednesday because the weekend just gone is exactly 2 years since we arrived in Australia (or was on last Saturday).  We decided quite some time ago that it was about time I left the state of New South Wales, (going into ACT doesn’t count).  And so we have booked a holiday cottage away for a few nights.  Something we have done once before, but this time we are going south, not north!