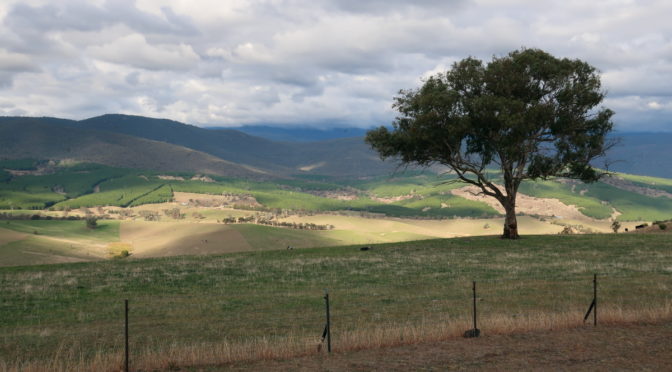 Its been slightly more than 2 years since we arrived in Australia having never set foot in the southern hemisphere let alone having been Australia before.  So with that in mind and with one other little tiny fact, we decided several months ago to book a holiday away, train the chooks to look after themselves (harder than you realise) and for me, to finally leave the state of New South Wales.  Yes, you read it correctly.  I haven’t actually left NSW (ACT doesn’t count).

Now when we booked this holiday, we had no idea that we would have moved house or obtained a second vehicle, or that I would have be back into hospital for an emergency operation!

Fast forward a few months, Mum & Patrick have been and gone, we are sort of in the new house – we’re not yet fully unpacked, something I have been working on hard but we do finally have most of the chooks looking after themselves long enough for us to go away.  There are still a few complications, mostly relating to no water in their compound…. so we had to purchase a 30L water container, a tap and jubilee clip to try to get around that issue.  Luckily the weather has cooled down a lot, so the flock are not drinking anywhere near as much water as they were previously.  Now the above, with a hose pipe attached and the water container at the top of the hill, meant that there was just enough pressure in the system for their water trough to work.  That had been the biggest hurdle to getting them self sufficient for a few days.

The other related to a sick chook I had been desperately nursing back to health.  We think she had a stroke because she was found much weaker on one side of her body that the other, but when we first found her we very nearly euthanised her immediately.  Another one we had found in a similar condition had died the first night and we didn’t fancy this ones chances much either.  But she survived both the first day and the first night and there were tiny signs of improvement each and every day at first.  We set a deadline for euthanising her if she hadn’t made any significant progress.  But she surprised us going from not being able to stand, eat, drink, sit up or even hold her head up (on the first day) to recovering sufficiently to be able to fend for herself for 3 days whilst we were away.  Each and every day she made leaps and bounds despite having very poor balance when we left.  She was left in the IKEA wardrobe in the mud room with a heater on.  Right up until the morning we left we were wondering about her chances, but her progress had been so good… enough said, we risked it and on our return she gave us that look that pretty much said, what were you worried about?

So, leaving the state of New South Wales.  It is actually an enormous state.  It is bigger than Texas and that is a pretty large state.

We had chosen an Airbnb in a little place called Corryong in Victoria.  Now for all of the restrictions on what can and can’t be taken into and out of the state we were expecting something along the lines of a border crossing.  But more on that shortly.

We decided to stop at the Dog on the Tuckerbox rest stop, and failed to see the dog.  But the food at Oliver’s is fantastic.  I was expecting to not be able to have anything more than a packet of crisps or just a drink.  I didn’t expect to find that they had a ‘vg’ option on their menu for vegan and I certainly didn’t expect to find that over half of their menu (and produce) would have that symbol.  I actually had a choice and was spoilt for it.  We ate in instead of the picnic I had packed and thoroughly enjoyed it!

Then we had a decision to make about our route.  We had three options

In our usual style, we opted for the middle option, totally new roads and the possibility of dirt roads and a longer, slower journey.

First of all, we were to come across a memorial to Australia’s first civil aviation disaster but only in Australia would the memorial not actually be where the plane crashed!  Southern Cross memorial site is on the top of a hill with a view. 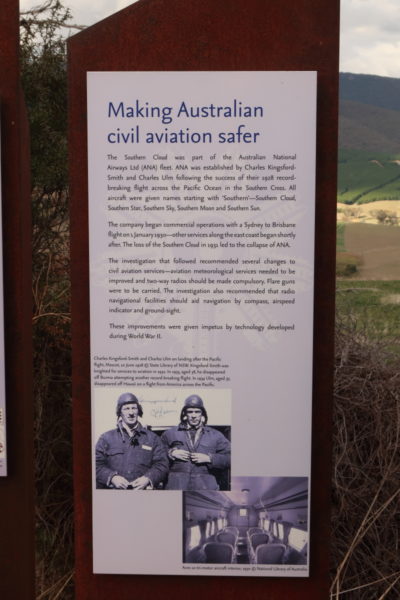 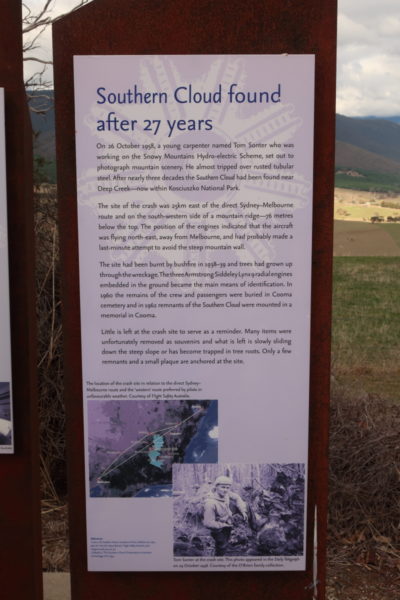 Looking towards Victoria and our route to come.  It was time to move on.

So, that border crossing and the great moment.  I’m going to leave the state of New South Wales and enter into Victoria.  We’ve looked into what we can and can’t take into Victoria and unlike a lot of other states, we are only entering a rice control zone.  Something to do with a disease.  That’s OK.  We are not carrying any rice with us… I’m still some form of formal border crossing for all of the hype around what can and can’t be moved around Australian states.

Yeh, and that really wasn’t exactly what I had had in mind.  So much for the ‘moment’.  We went to the right by the way. 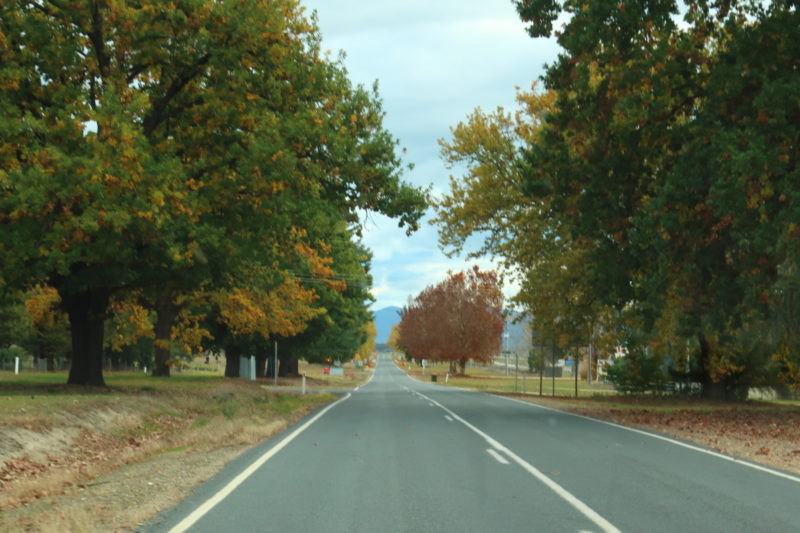 Towong reminded us of a small town we had cycled through in Lithuania (we think).  There, in one of the many parks, the Autumn colours were showing on the trees just like this and there were youths everywhere with brushes doing their civic duty, brushing the leaves into huge piles to be taken away and burnt.  Here they were collectors with a large ride on mower presumably, but today, it was just a day to admire their colours (apologies for the quality of the image, it was taken through the windscreen of a moving vehicle).

It was almost sunset when we entered the town of Corryong and after a quick stop at the local supermarket – a surprisingly well stocked IGA, we proceeded to try to find the Airbnb.  Then we decided we would much rather look at the view and stopped at the viewing spot for some fresh air and to look at the view across the flood plain.  It was clearly a flood plain but missing rather a lot of water! 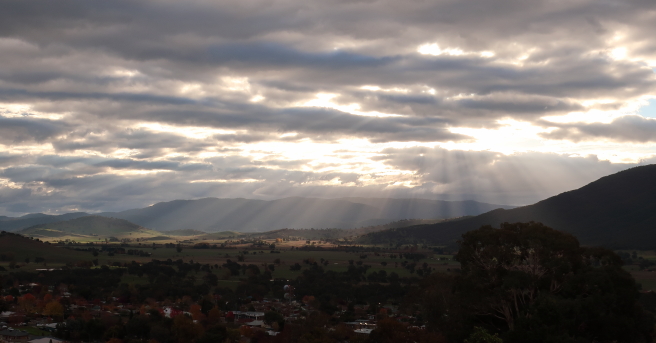 It was a good view and worth the stop.  The light was great, but it was getting cold and we knew that the Airbnb only had a slow combustion stove and that the owner wasn’t around that day to have lit it before we got there.  So we had to leave.

With the fire lit, I proceeded outside onto the veranda to have a look at the last of the light and see if there was a sunset.  It was disappointing with only the tiniest of pinkness around the edges of the clouds, so I wandered off to have a look at the fruit trees in the garden.  In particular at the lemon trees which were huge.  There were a lot of very noisy birds in and around the garden as well and I was hoping to get to see some of them.  I didn’t, but we did find several Sharon fruit trees which took a bit of identifying to be honest!  And whilst I was doing that, the top layer of the clouds started to turn pink and we had a great sunset after all!