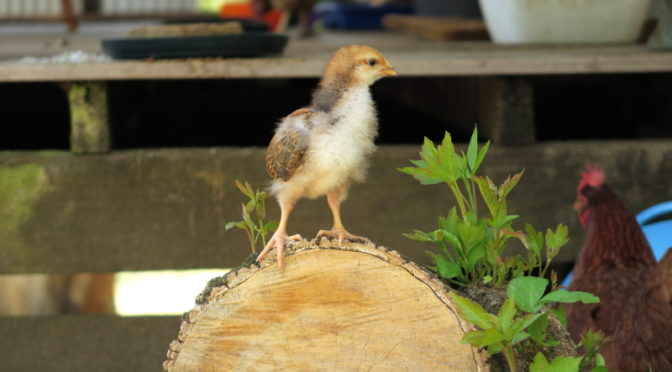 I promised an update on the chicks and the chooks.  So here it is.  Yesterday, Christmas Day, they were 2 weeks old.  We still have the two of them and both are growing strong and well. And wow, have they grown.

One day later and the ginger chick is very shy and it is exceptionally difficult to get any photos of it.

There has been one scary moment along the way.  Mum, when the chicks (only 5 days old)  were still in the outer enclosure only and not yet able to get out, came across a brown snake.  These are poisonous, like most things in Australia and hunt mice and other small animals.  The chicks were about the right size to take at the time.  The first thing I knew about it was Mum attacking it and making the most horrendous noises.  I knew instantly something was wrong from the house where I was sitting at the time.  I saw it strike out at mum. Now mum has deformed feet and is quite large and heavy and usually not the fastest of chooks, but she wasn’t bitten.  She was defending her chicks and would do anything to keep them safe.
I literally ran to the kitchen to put on my boots and get outside, grabbing a very long and heavy rake whilst I was at it.  I only wanted to make sure that mum and the chicks were OK, but I also needed to know I wasn’t going to be in danger.  I had no intention of attacking it, only making sure that I was able to enter the chook house unharmed and without being attacked myself.
During the attack, the chicks had run away into the inner enclosure and were effectively trapped there.  By the time I had entered the chook house and made sure that it was clear of the snake by very carefully moving the nesting boxes using the rake – I didn’t care at that point about what happened to the wood shavings, I just wanted to see under them and at the back of them to ensure it was clear and that I wasn’t going to end up trapped as well.
All was clear and I never saw the snake again, but mum was trembling and shaken badly and it took me a while to calm her down.  I stayed with her until she was OK again, showing her that chook house was clear of the snake and allowing her to inspect underneath and behind the nesting boxes.  She eventually went off with the chicks and sat in one of the corners where we have set up the tarp to provide a shaded area in the outer enclosure.

Mum (aka CC, or Charmaine), started to bring them out of the outer enclosure when they were just 9 days old.  It scared the living daylights out of me because they were still so very small.  But she took them back down there a couple of times during the day and then the same again the next day.   The house is a long way for a little chick, from the chook house and the safety of the nesting box and inner enclosure, but we had decided that we were taking the approach of letting her get on with it, so I had to trust her.  She found them several places to hide and sat with them under the bamboo away from the rest of the flock.

Within 3 days of their first outing they have grown so much.  Yesterday saw the first time that they actually managed to get up onto the veranda.  Mum has been trying hard to get them to come up because her food and ‘adult’ food in general is up on the veranda along with fresh water.  Initially they didn’t want to come near to the house at all.  Under the house is a cool but dark place and they were not interested.  But they have slowly lost their fear of it and as a the days have gotten warmer, they have come to appreciate the area under the veranda in particular.

I had taken to putting their chick starter down in a tray along with some water in a small bowl under one of the conifer bushes that are in the garden.  I would have to top up both several times a day, frequently because it had been knocked over but more often because it had been eaten or drunk by the other chooks.  It seems they are rather partial to chick starter despite not eating the soaked pellets that go down to supplement their feed.  The pellets, by the way, are simply the pellets from the current feed that they don’t want to eat dry.  So I let them pick everything else out, and then they get soaked in water (equal volume by well volume) and fed to them and until the chick starter, they used to eat it!

On Christmas Day, the chicks were exactly 2 weeks old and whilst we were sitting on the veranda, mum managed to tease both chicks up onto it.  We weren’t prepared for this and as of yet hadn’t covered over the chooks water container in which the chicks could easily drown.  They didn’t stay long, but just long enough for mum to eat some grain and for the shier of the 2 chicks to make it up the side of the steps!