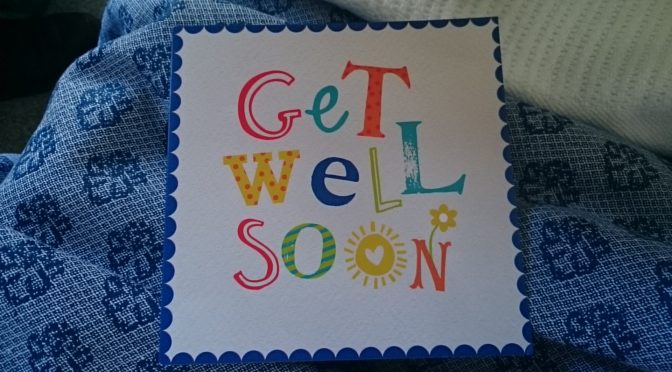 It is so hard to work it all out.  But from what I have remembered and been told the events in the last fortnight are now a touch clearer.

On the Sunday I took Stuart to the airport for him to go to Adelaide.

The Monday I didn’t feel great, by the evening I was feeling really bad so had to ask Stuart to come home.  He came home from Adelaide on the Tuesday evening and by then I want well enough to pick him up from the airport so he had to take a taxi (just under $100 before you ask).

Thursday came.  I didn’t really have the strength to stand out walk into the doctors surgery so Stuart had to push me in the wheelchair. I could barely talk more than a couple of words by then before needing to pause for breath.  Our doctor did some tests, repeated the same tests with different equipment and I gather rang for an ambulance. The paramedics repeated the same tests and got the same results.  I was very ill. Stuart tells me that my oxygen saturation levels were 38%. Luckily the ambulance had actually been passing Bungendore when the call came through so they were there very quickly.  I was transfered to Queanbeyan.  The list thing I remember was seeing the ambulance where our car had been parked. I don’t remember much began that and waking up /coming round in ICU in Canberra hospital.  The ambulance took me to Queanbeyan hospital initially. I have no memory of that other than a vague memory of a pressurised oxygen mask but when that happened I have no idea.  I found out last night that in Queanbeyan hospital I was put into a respirator. I was then transferred to Canberra hospital ICU by air ambulance.  I’ve absolutely no memory of being in a helicopter! I’ve also very little memory of the first day in intensive care.

I do know that initially I was in an isolation room until they knew what they were dealing with.  In my case that was double pneumonia (bacterial).  Obviously oxygen and breathing was the most immediate problem.

As time went on communication became an issue.  Answering questions and getting basic information across was exhausting. Pen and paper was the best option, though some of the staff figured out my sign language. It was good when the same member of staff was on for several days in a row.  I was moved out of ICU bed 2 (isolation) and into ICU bed 9 where I was to stay for over a week before being moved to ICU bed 5.

Learning what to do, and how to do some things when you have so many tubes sticking in or out of you took time and guidance.  There’s no dignity in an ICU bed despite staff doing their best to try to maintain it for you.  Adult nappies really leave a lot to be desired. Tubes in and out everywhere cause problems and even turning over initially was impossible by myself. I was just too weak. It took a nurse and two wardsmen at first, then a nurse and one wardsman until after all my tubes are removed and I was just on pressurised oxygen when I was strong enough to help a single nurse roll me onto my side.  It’s small victories, little ones like learning how to do my own teeth whilst on a respirator that made the difference.  Most of the nursing staff were happy to see me doing it myself. I was able to follow their instructions and didn’t need telling repeatedly not to panic, to calm down, not to try to pull the tubes from my mouth: all things I heard other patients being told.  But it was also very obvious to the staff that I want getting any visitors. Pen and paper explanations answered the unasked questions.  My husband was also sick with pneumonia as well, but he was at home unable to get in to see me.  I have had a few visitors.  Stuart has now been in twice. Another friend once, another friend three times.  Stuart’s boss and partner have been in twice as well.

Little things became frustrating at times. It was 6 full days before the respirator tube was removed and I was moved to a pressurised nasal tube but I still had the nasal gastric tube in for feeding.  It was another 4 days before my throat finally stopped hurting me. The catheter was to spend s few extra days in a well. Then the various cannula (arterial and central line) were to take a few more days to come out. My first shower was bliss. Bed baths, frequent rub downs and massages, along with my hair being washed available couple of times (some bag of chemicals heated in the microwave and then placed on my head and rubbed in for 5 minutes) all of them fell short of that first shower however brief it was (not to mention someone else actually doing the washing bit of it). My second shower I was allowed to do alone which was bliss. That was only yesterday.

Today was a big day.  We had been waiting for a bed on a ward for 5 days I think. They had given up trying for a respiratory ward and settled for a renal ward instead. I have a few issues with my bladder since coming off the catheter so with the monitoring they had been doing, I qualified for a bed on a renal ward as well and today, Tuesday, a bed was final found and my view has changed.  What felt like their longest stay resident was finally found a new bed. Sadly I have already decided that it is nowhere near as comfortable as the beds in ICU.

So how have I filled my time? I have spent a tiny amount of time online; I’ve borrowed one of the ICU Ipads to watch Netflix (yes they have Ipads you can borrow!) I’ve replied to a few messenger posts, but mostly I have tried crosswords, coloured in or done some knitting.  And I’ve slept and slept. Being ill take an awful lot out of you. 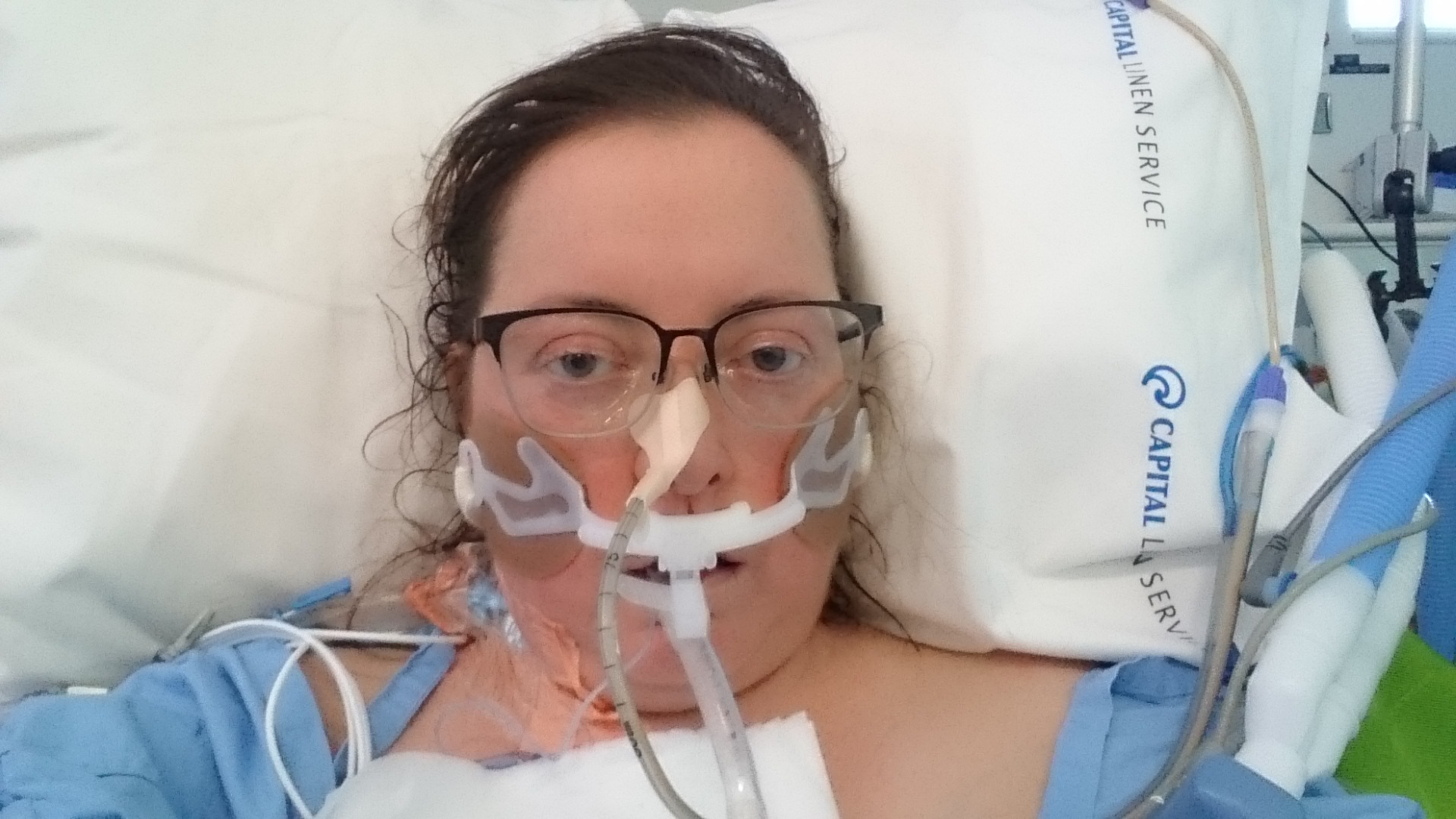 It took time but this was me on the respirator after being moved out of isolation. 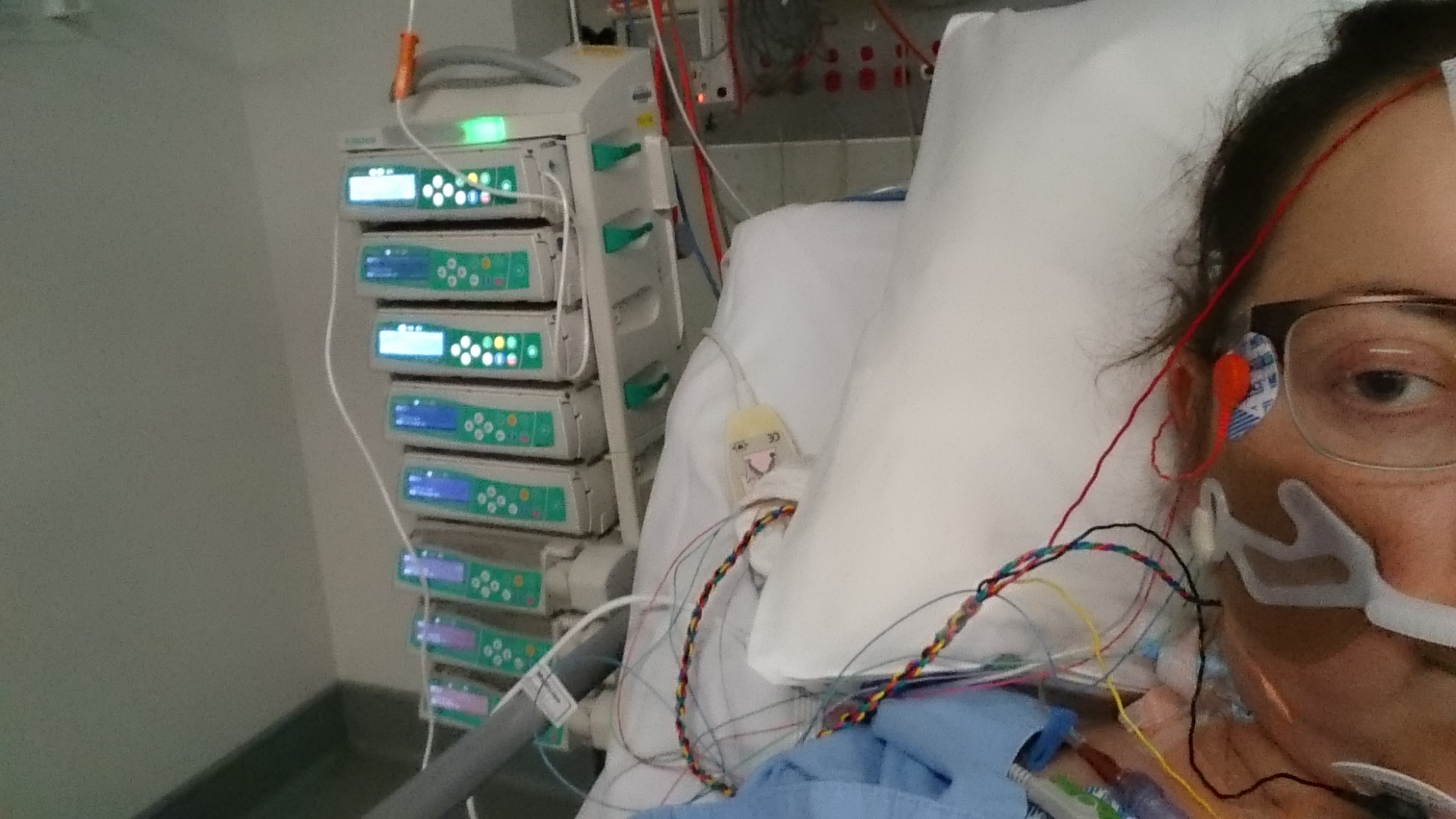 Some of the equipment I was on, on one side of me 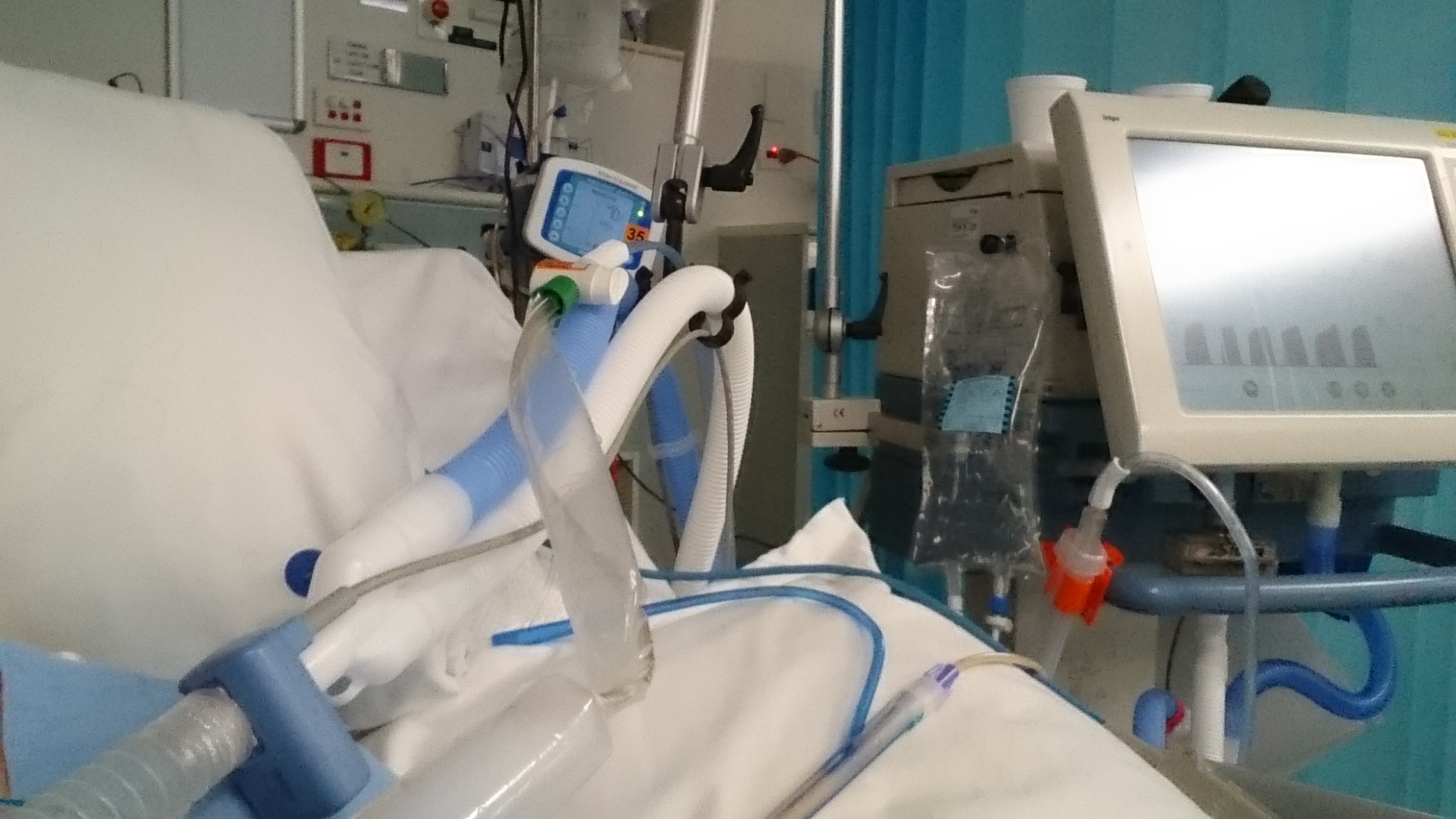 And on the other side of me, but not showing all the feeds and drips I was also on. 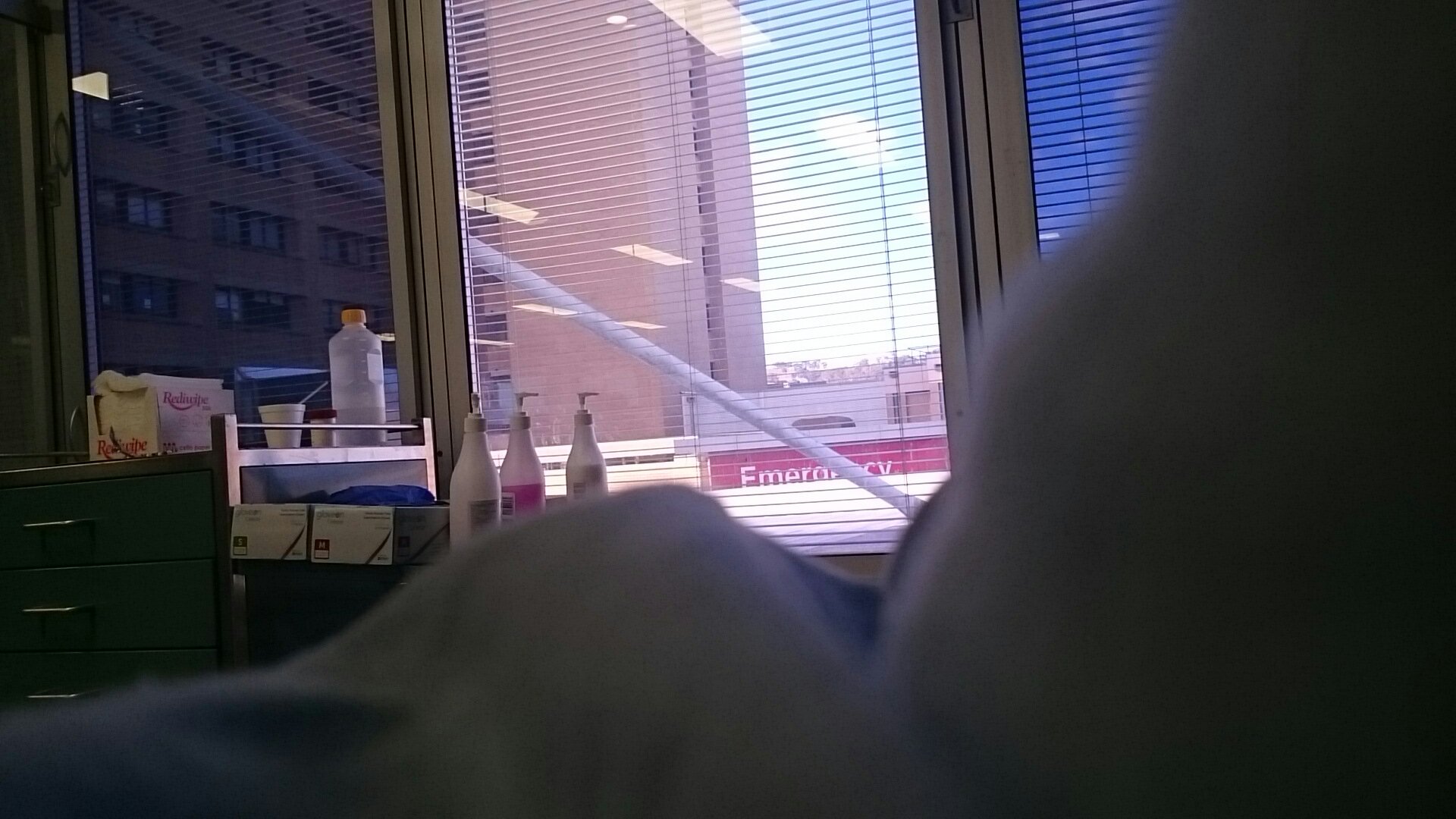 It took me 4 days to work out what the word in red was! Yes, I was that ill. 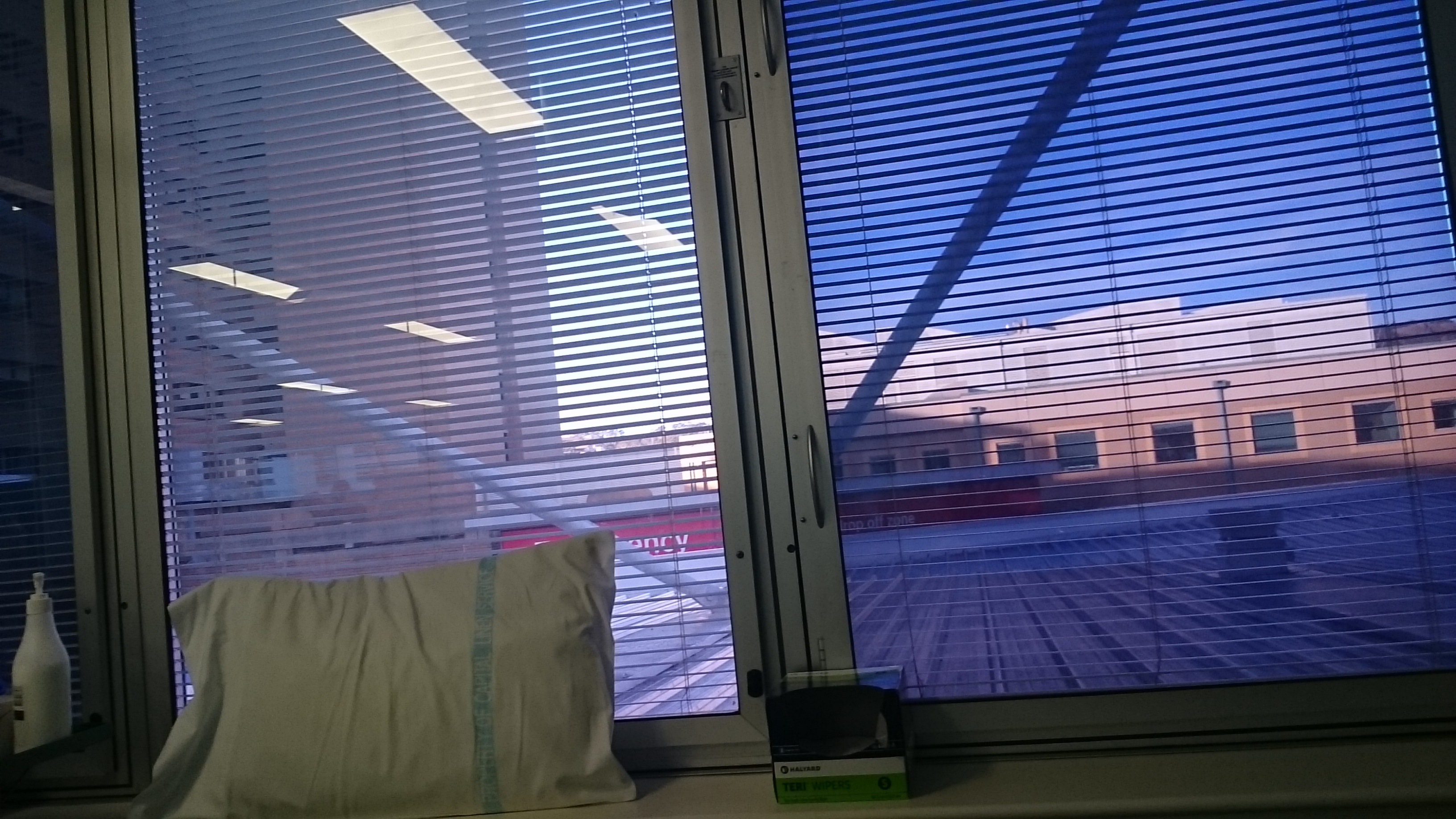 My view changed ever so slightly. I preferred the first one (that I can remember). Mostly the sky was blue masking me want to be outside but the last few days have been overcast and grey.  Apparently it has rained some nights as well. 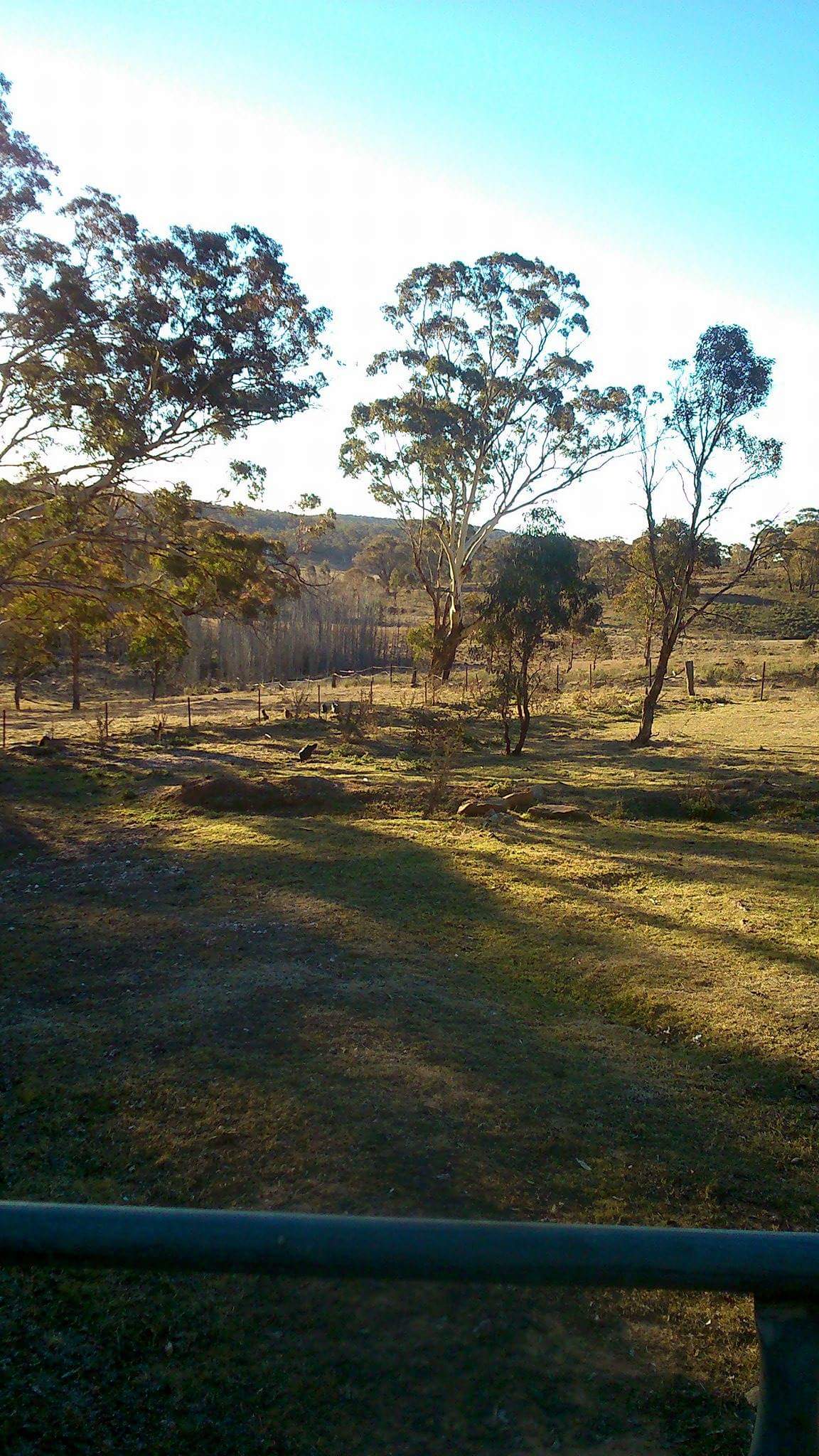 Stuart sent me this picture. Apparently I was meant to play spot the chook! Most of the flock is in there somewhere. 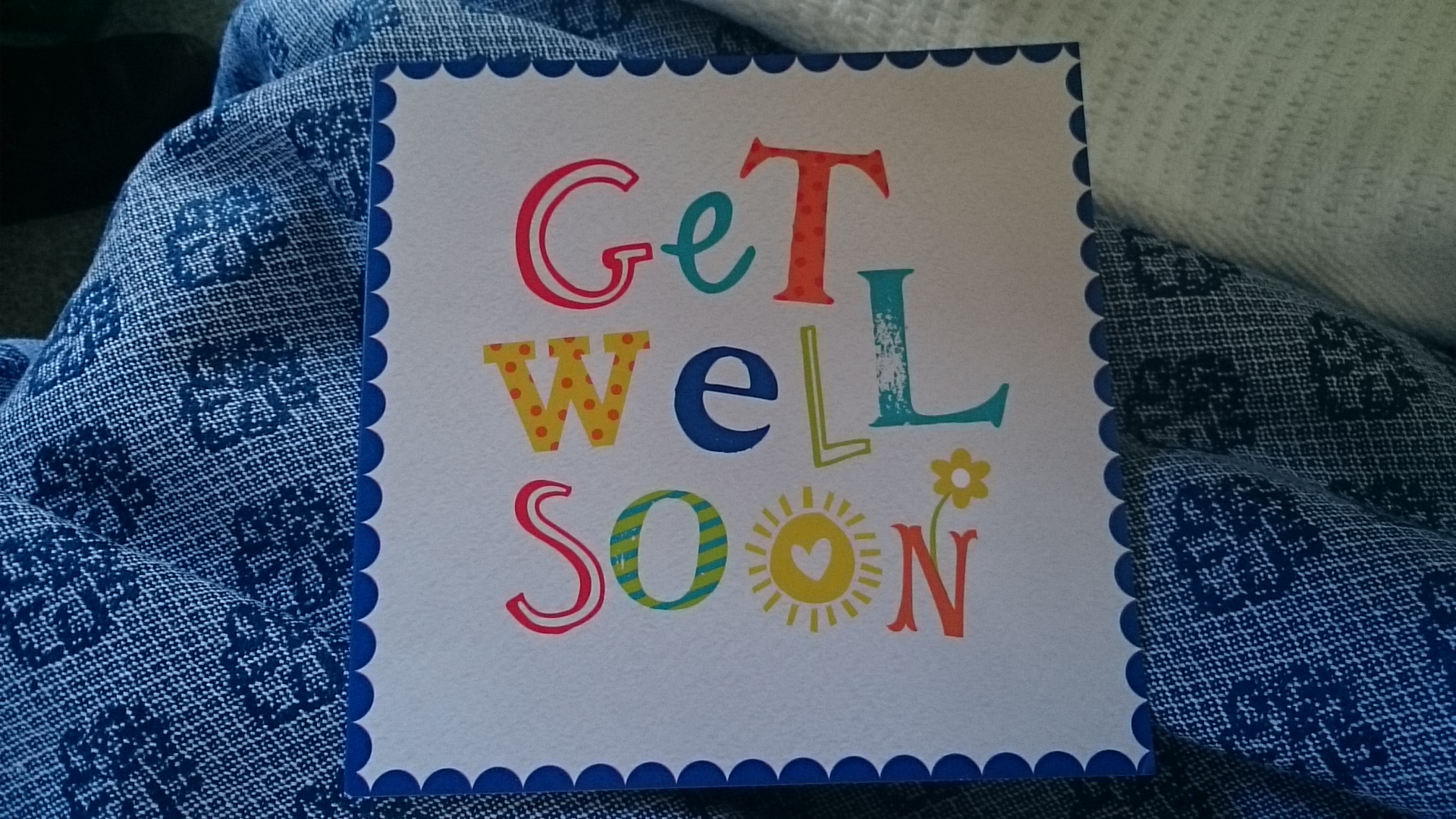 I have received my first get well soon card… 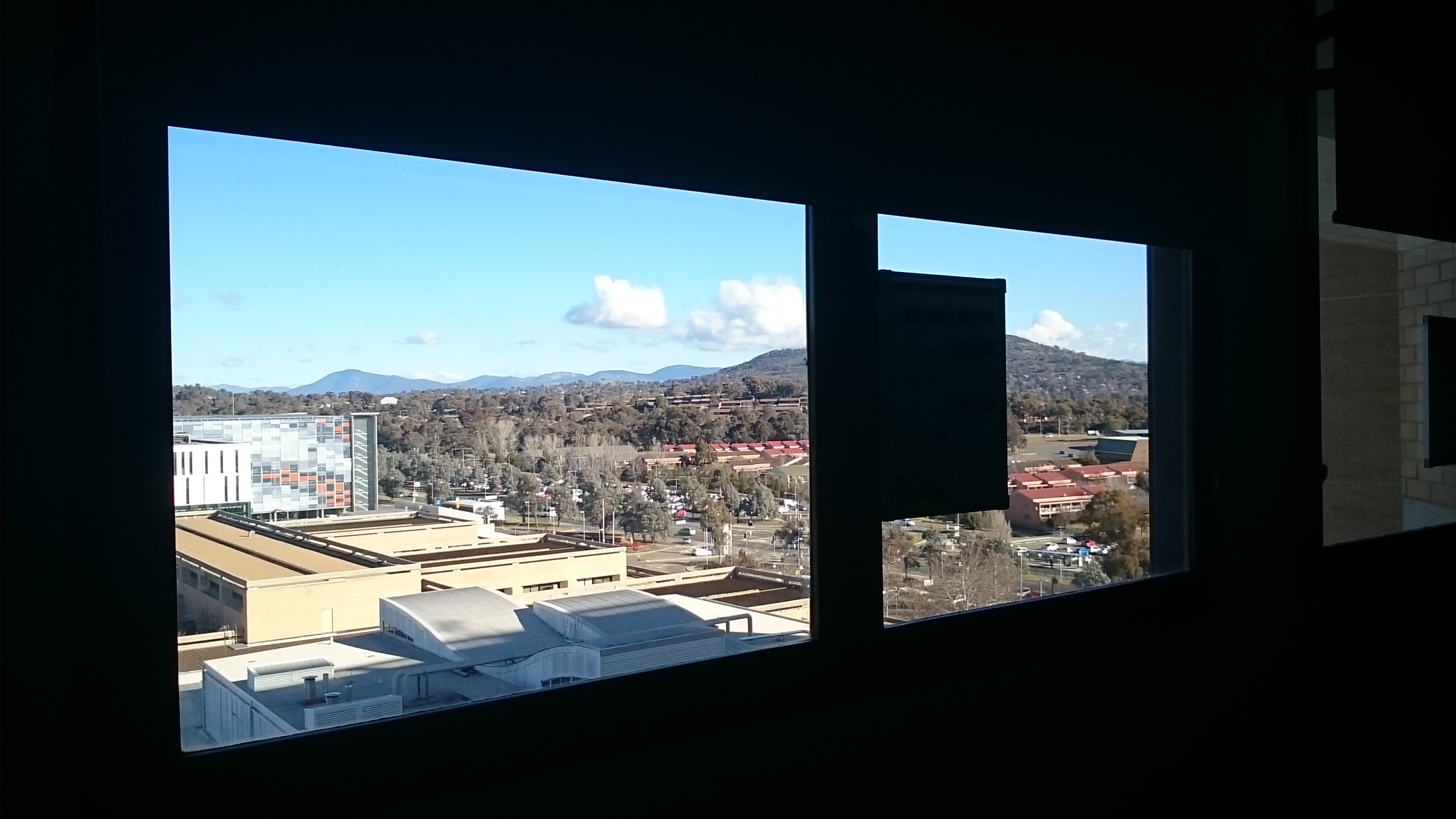 And my view has changed.

So that is it really.  Not a lot has happened.

Our only guess as to when we could both have been exposed to pneumonia is the Saturday when we both went shopping for a change.