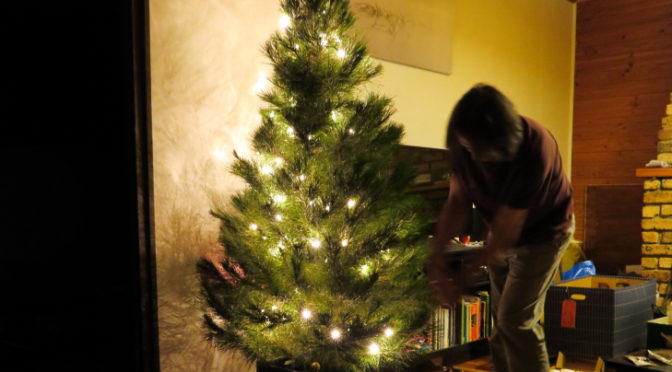 So, Sunday just gone was Christmas Tree shopping and brought back memories of buying over very first Christmas Tree together from a Christmas tree farm north of Preston on the A6.  Stuart tells me I whimpered when we had chosen our intended tree and the guy turned up and cut it down.  This time round, some 23 years on, I was much braver…

It was also done, Aussie style.  That is to say, hot and with your 4×4.  We were given a tag, and telephone number and told to take our vehicle (or walk) around those 2 fields and choose our tree.

The only real issue was that every single tree has clearly had a chainsaw taken to it and it has been shaped into being this, well shape.  It also means that there is not a hope of hanging a single bauble on the tree and getting the baubles to actually hang without some major tree surgery because they are simply too thick and there is no space between the branches.  There was only the one type of tree to choose from.

As you can see, the weather was particularly difficult.  It was actually cloudy and overcast at home, and much cooler.  We were both glad to get back!

At home, the tree was de-netted and stood in water.  Essential when you have just cut something down in 30°C and in the middle of its growing season not its dormant season!  I also wanted to allow any spiders chance to escape overnight before the tree was brought in.  I also, with gloves on, removed all of the dead needles from the inside of the tree and Stuart gave the tree a really good shake for me.

Before you ask, he is brushing the carpet!  This is a very long needled pine/spruce and needles are roughly 4 inches or more long and the tree is very, sorry, was very dense as well.

As you can see the Christmas lights are working after a couple of bulbs were changed and Stuart has re-plugged them so that that now have an Australian plug on them.  Unfortunately the clear lights which is what the entire set is, the spares are not long enough in the body that fits into the cradle so don’t connect, the result is that the emergency coloured spares have had to be used.  There is a blue and a red on e in there – the red being the most obvious!  We will have to see if we can source some here.

I always put the lights on first.  Then I hang our baubles.  These are our original ones.  We haven’t purchased any since then, until Monday, when we purchased a single Australian one, in keeping with our others which is a shiny red bauble with Merry Christmas on one side in gold lettering and 2016 on the other.  We thought purchasing an Australian bauble would be a nice idea.

Going through Canberra’s Civic Centre, this was their attempt at Christmas decorations.  I thought the tree was quite nice.  I wasn’t quite so sure about the reindeer especially given that in Australia, rumour has it that they sleigh is pulled by kangaroos!

The chosen bauble, the first in 23 years.  Amazingly we only lost one bauble in shipping our Christmas tree decorations to Australia.

Stuart had the idea of hanging the star from the ceiling because this tree is lacking a central top ‘spike’ to anchor the star to and with it hanging, it also catches the light as it spins around.  In fact it was the first thing a visitor commented on yesterday when she came round.

As you can see, I have had to thin the pour thing quite dramatically to obtain that ‘classic’ Christmas tree look.  Now to keep the tree alive in +30°C heat!  The Christmas tree stand which holds the tree upright also has a bowl to contain water in it.  I suspect I will be topping it up on a daily basis!