After a quiet night and slow start to the morning, we packed the car and had one more walk along the beach. This time the weather wasn’t as good and was low cloud and drizzly. 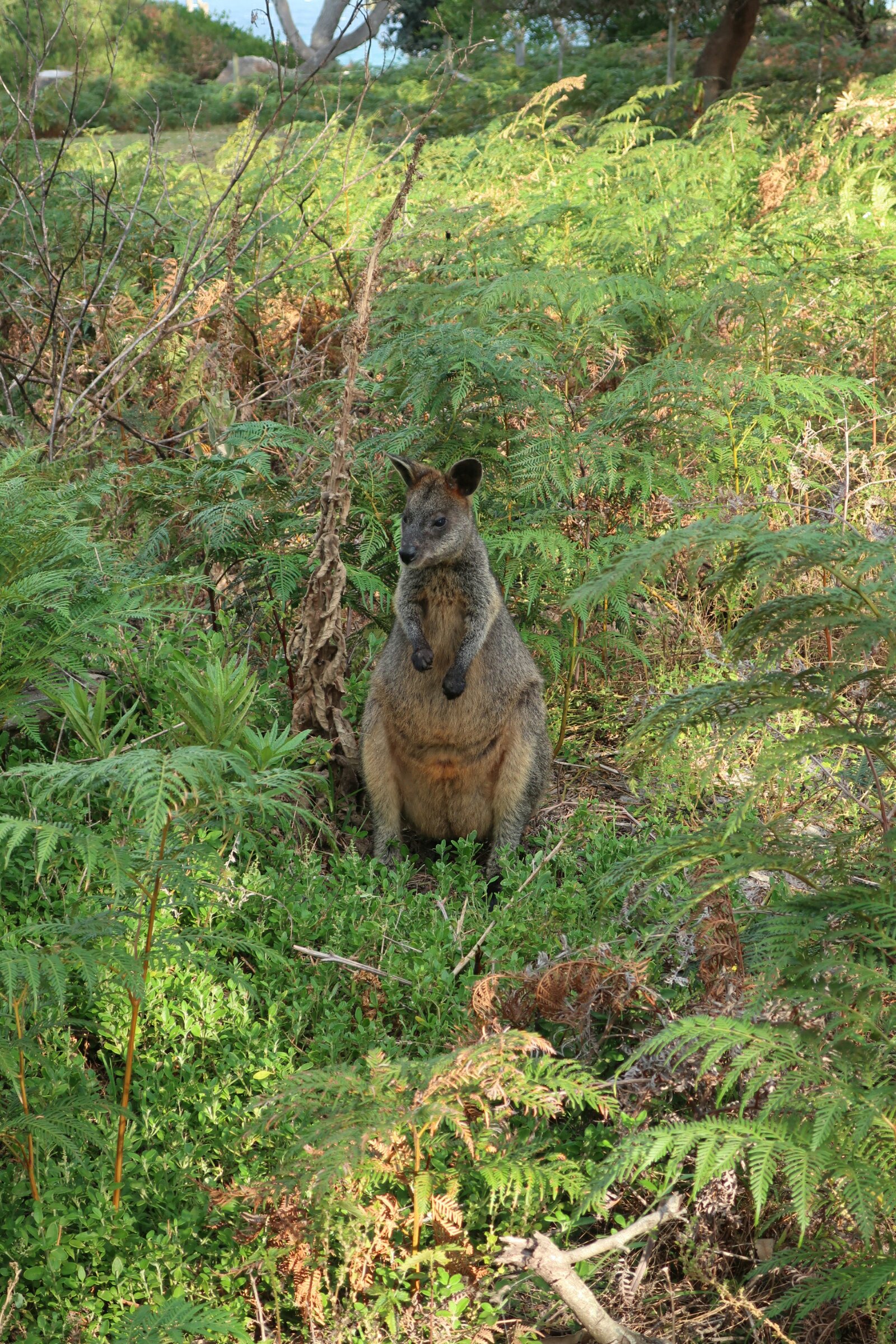 But, I wanted to have a quick look at Middle Beach lake first. 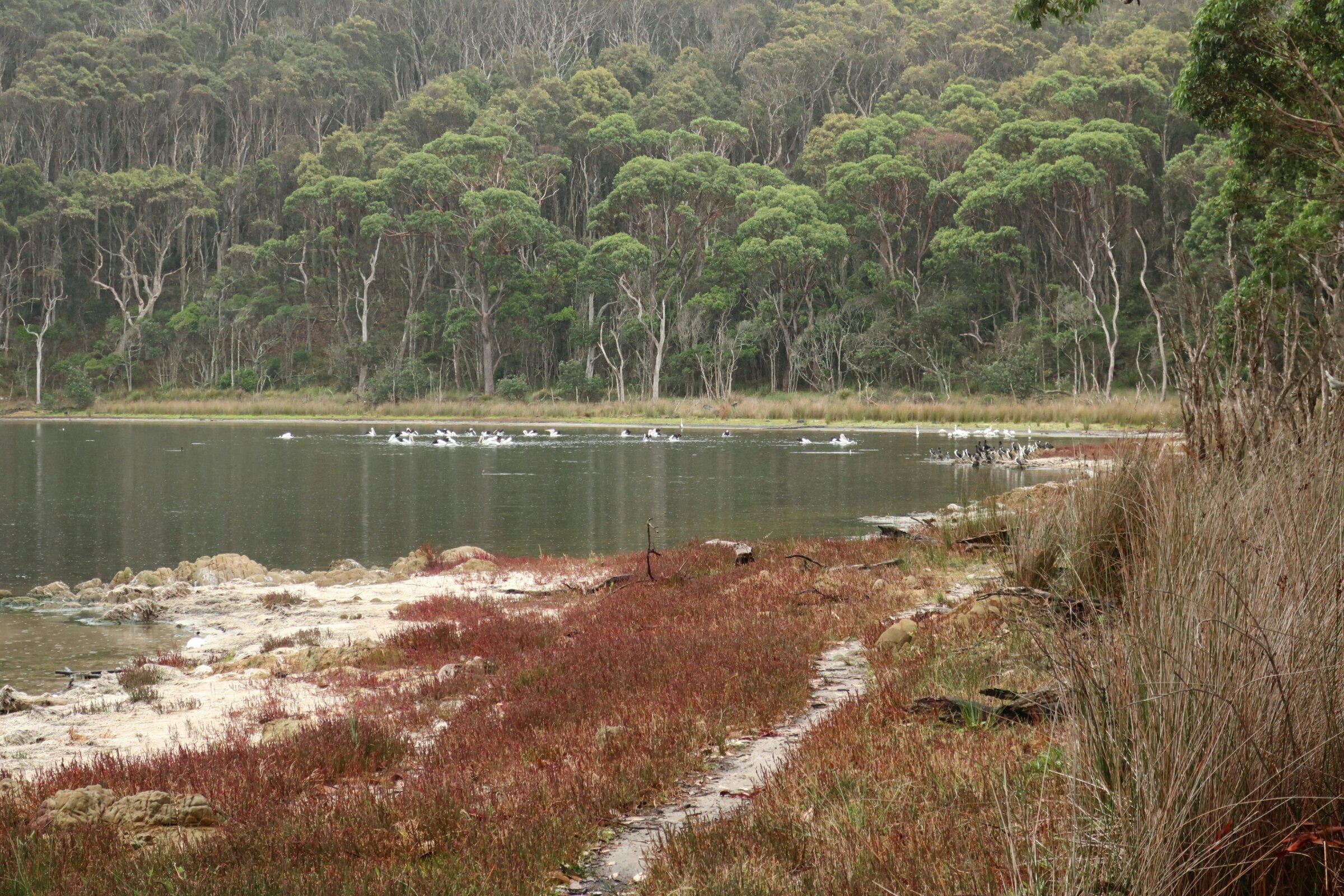 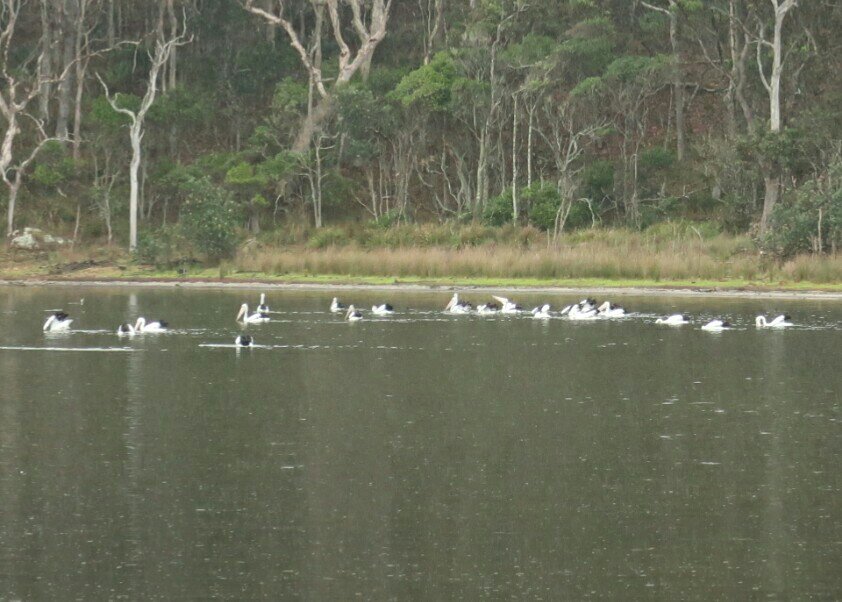 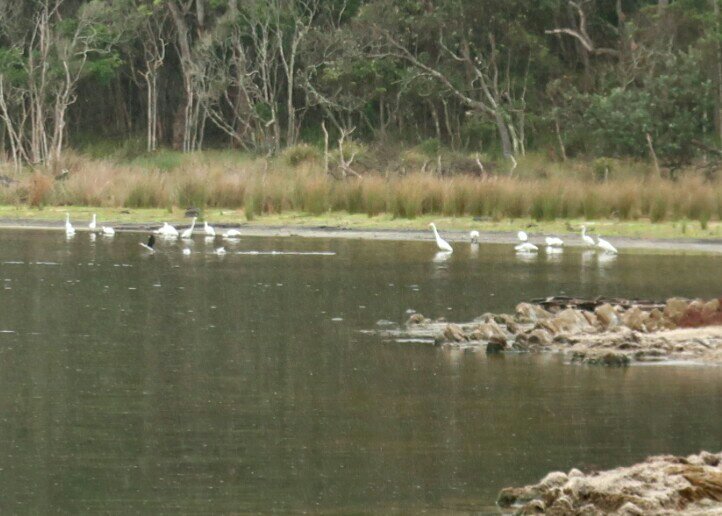 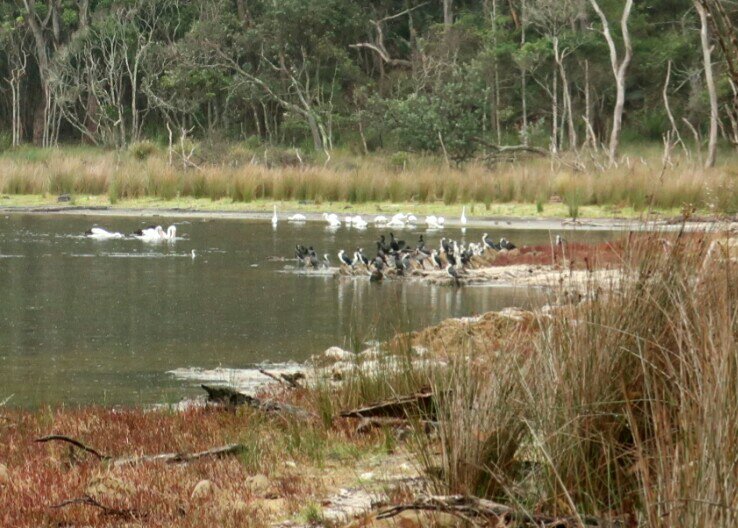 We were a touch surprised at some of the wildlife! Pelicans or something like them are obvious on the left of the bottom photo.

Then it really was time to head off home.

But not before I spotted some great tree bark (again) and got us lost in a forest in low cloud! 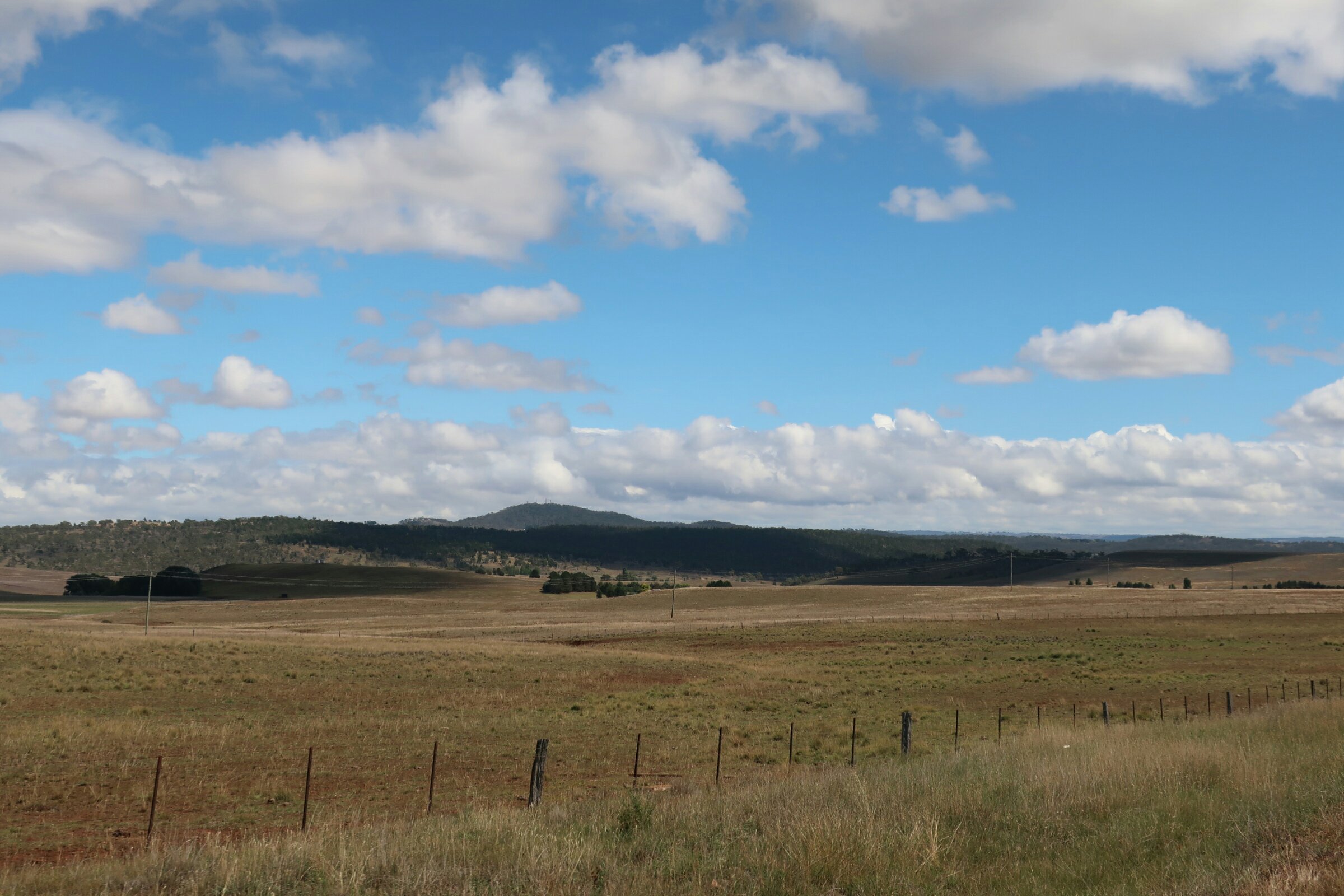 Some of the scenery along the way. The weather had cleared up by now, or we had moved into an area of better weather!

I’ll try to add a map of our route soon! Although we were in no rush, it was time to get around to actually leaving the campsite and get to Green Cape lighthouse. On the way, we passed a lookout point and decided to stop and have a look.Wow, what a view. We didn’t think we were that high up but thankfully someone had the sense to clear some of the bush so that you can see the view. 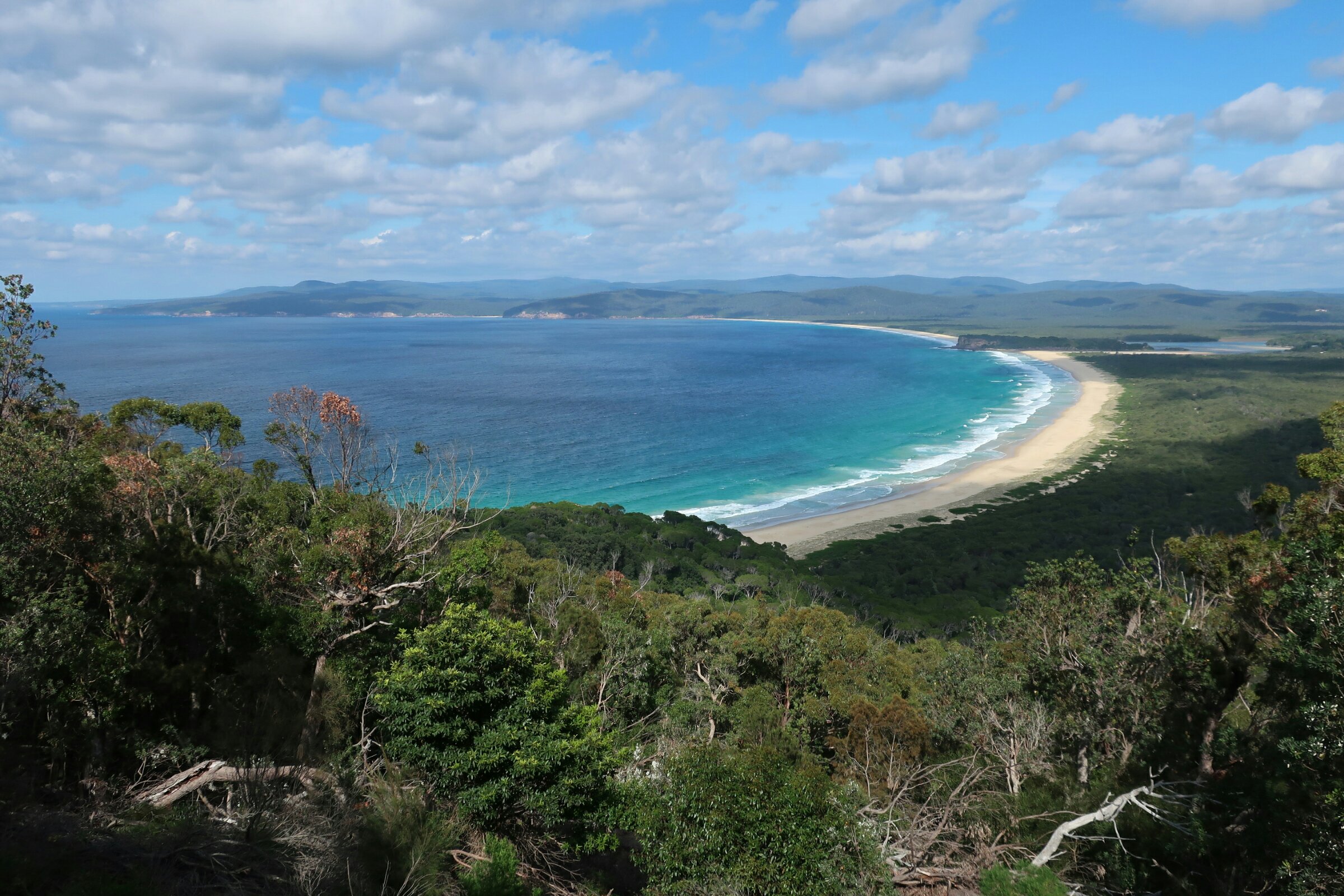 This is Disaster Bay. So named because of the number of shipwrecks that have happened in the bay itself. 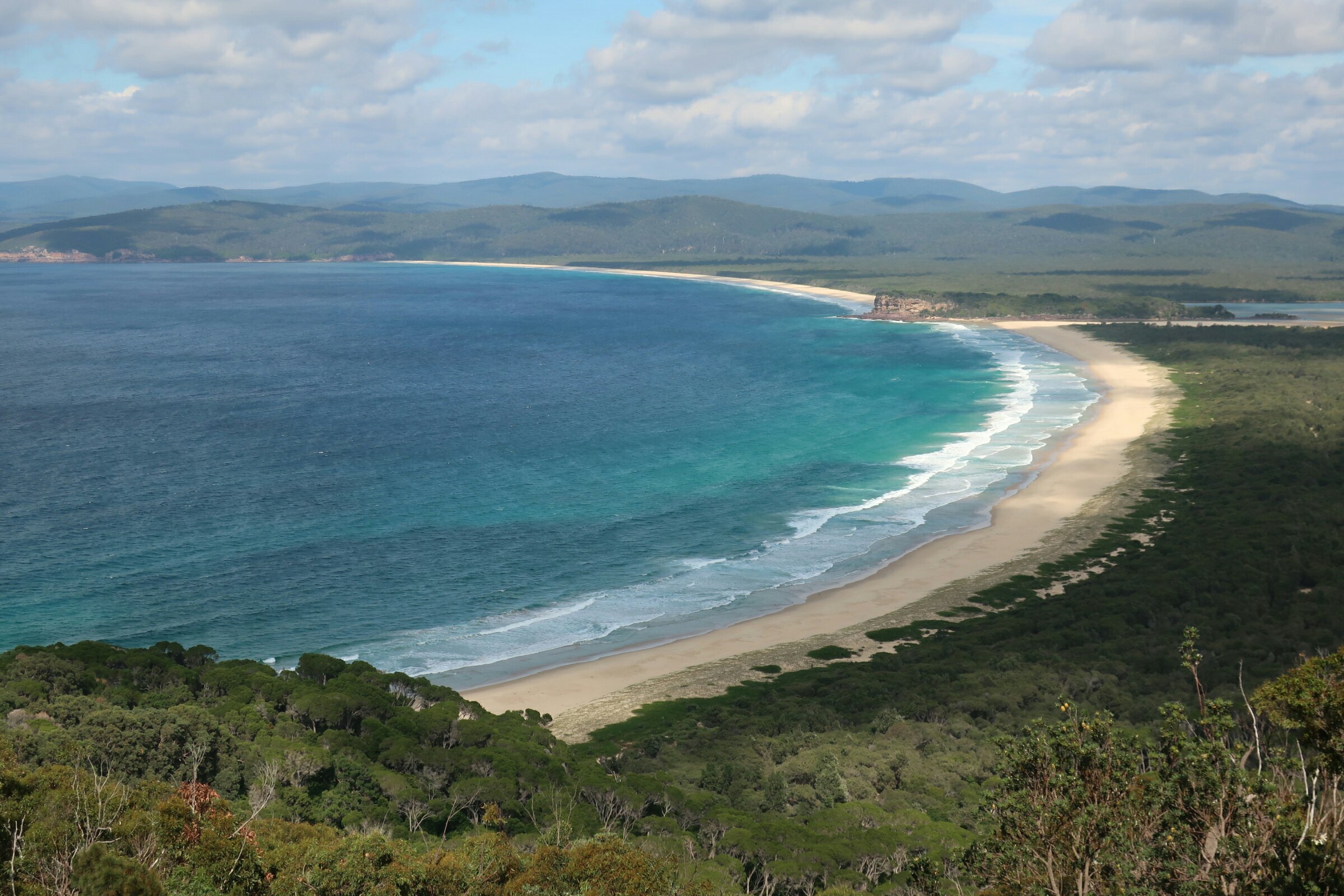 Apparently the bit of land in the middle used to be completely cut off and an island in its own right. Now the sand goes all the way to it on both sides and at low tide you can walk to it. 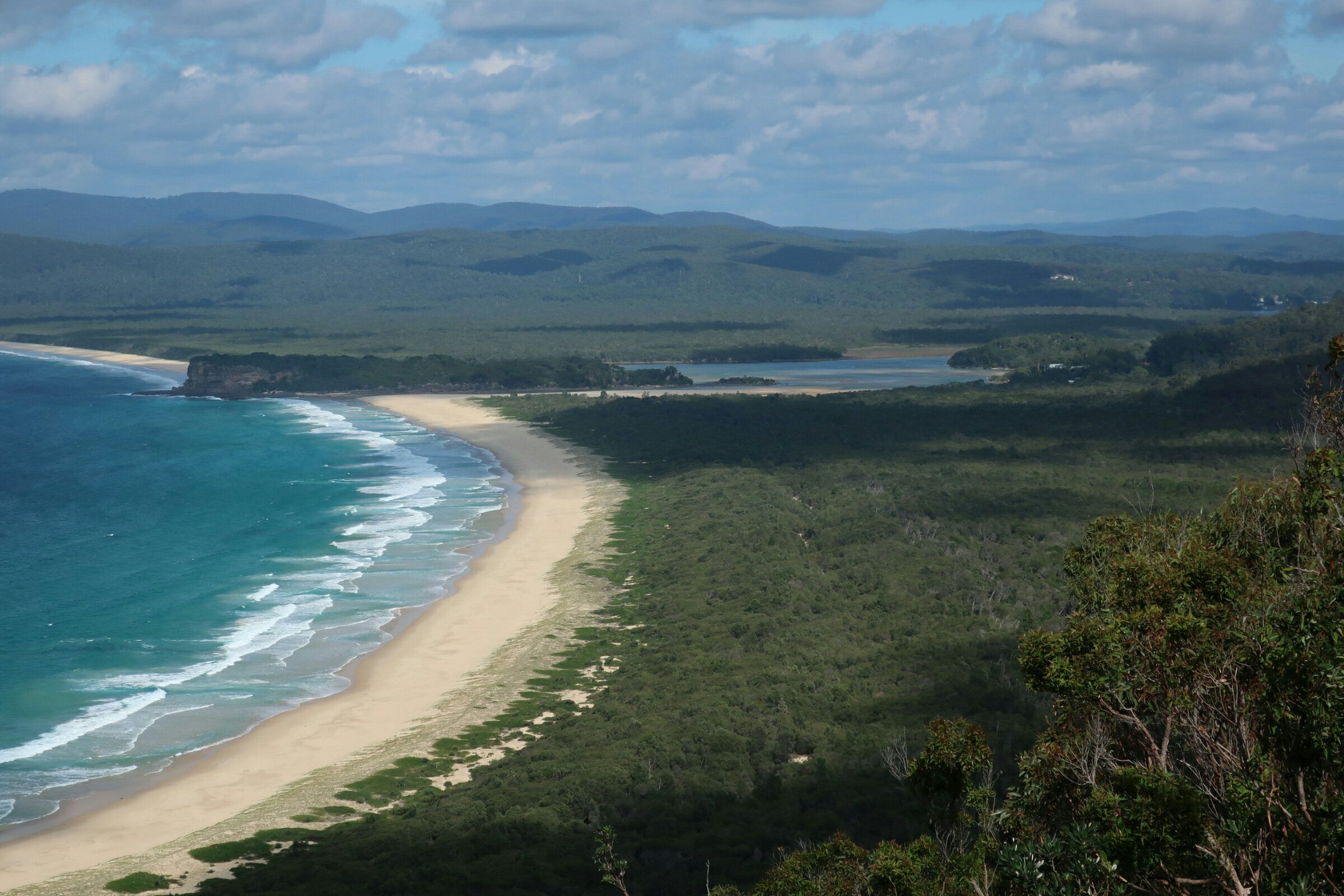 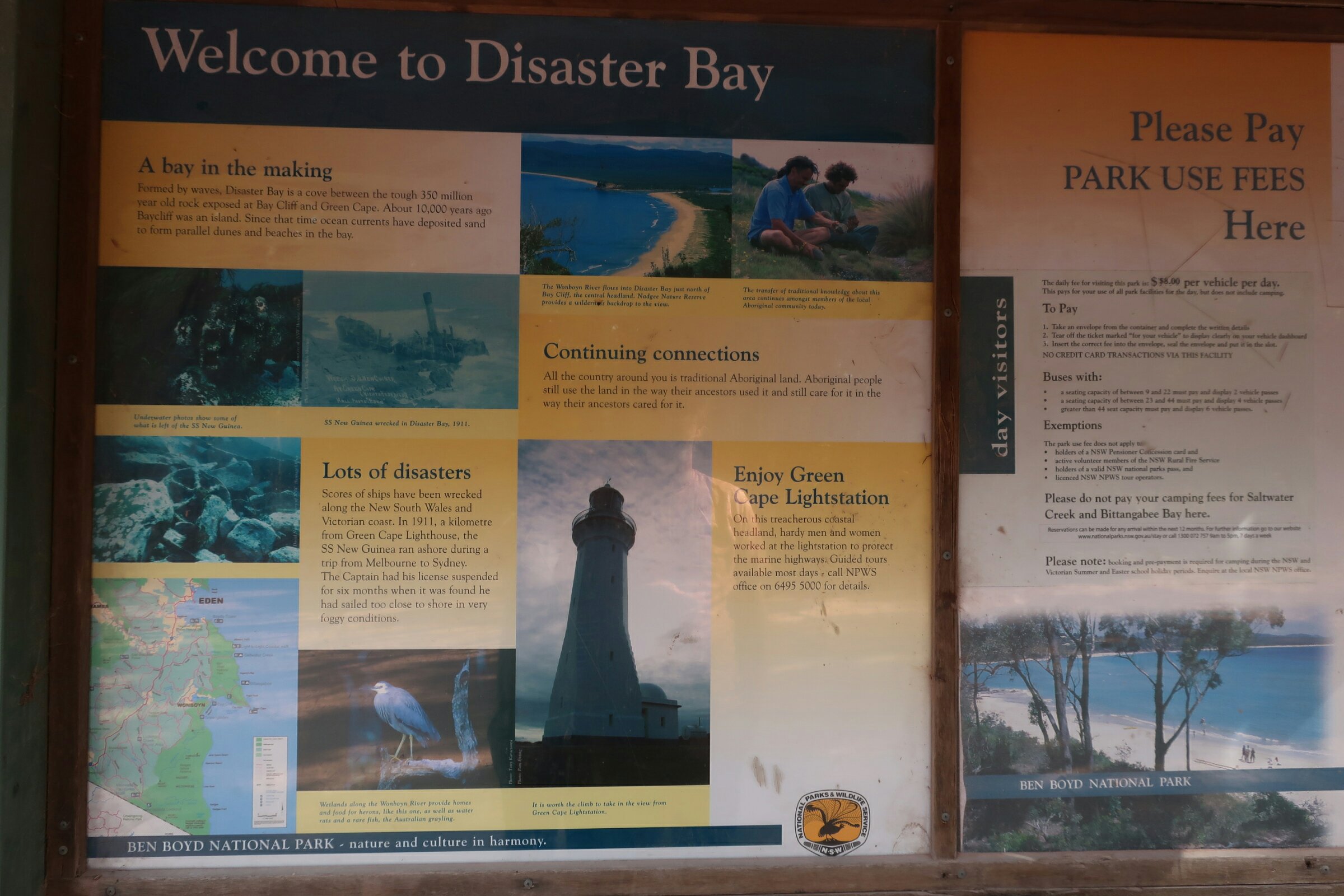 After a quick pause here, we headed off to the lighthouse.

Then it was time to head off somewhere. We hadn’t decided where we were going to stay that night, but we had a rough idea that it was not too far away and a touch closer to home. But we needed to work it out because of campsite fees applied, there was a chance it would be busy and the sooner we had booked it, the better really.However that was a job for later. Sadly tours of the lighthouse had to be booked in advance. There was no hope of an on the day turning up approach because all you could do was walk around the outside perimeter of the walked gardens. Walled no doubt because of the constant wind. Time to find somewhere to have a drink and make plans. Back to Disaster Bay lookout for a coffee.After coffee, we headed back to the Prince’s Highway and headed north. Our destination was to be Eden. At Disaster Bay, we had just enough of a mobile phone signal to be able to plan things. The site we had chosen for that night was one where there were no fees, but you couldn’t camp next to your vehicle. You had to carry things a short distance to the camping area and we guessed that that would reduce the number of people camping there. Families in particular wouldn’t want to carry things around with young children…Eden had a number of things going for it. One is that it used to be a whaling station and as such had a museum there. Two was that there was another lookout point, but we didn’t think that much of it. The bay had a commercial port in it because it is one of the few that are deep enough to accommodate large ocean going vessels. Three was that there was reportedly a cafe that did very good vegan food and Stuart wanted to go there for lunch. So after the disappointing viewing point (disappointing after Disaster Bay that is) we opted to leave the whaling station museum for another day and headed off for a birthday lunch. 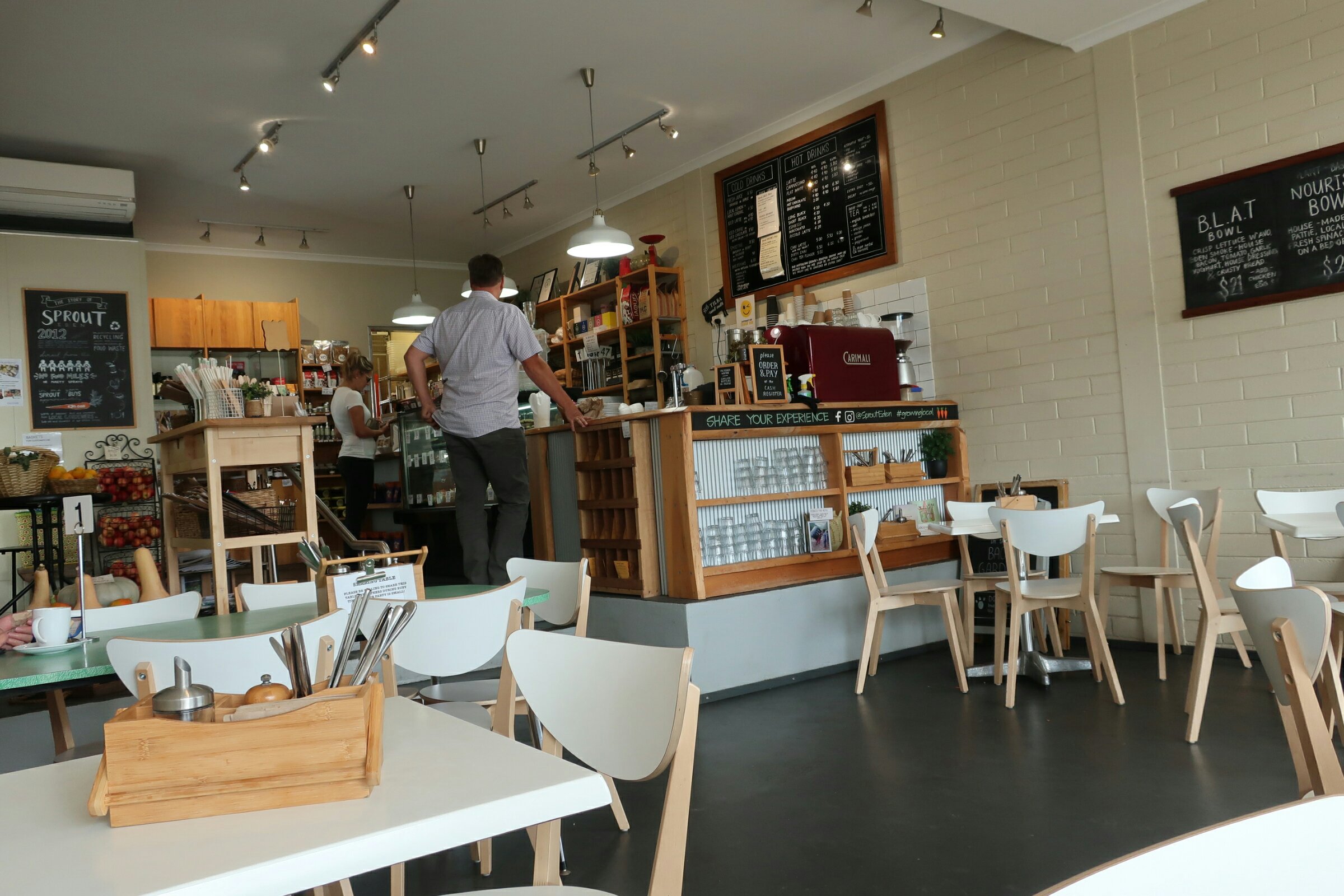 The Cafe was full of wonderful local produce and even sold locally grown heritage seeds for vegetables. 5 packets at a cost of $10 found their way into our shopping basket!There are dedicated vegan options even on the specials board. I opted for one of the specials whilst Stuart went with one of the standard vegan options. Even the sandwiches and wraps had vegan options and everything liked really good.

After a lazy lunch, we headed off towards the campsite. Directions should have been easy but the turn left here please didn’t work until Stuart had run out of road! A minor diversion ensued taking us up and over the spur of land with a surprising amount of up on gravel roads. Once back onto tarmac it wasn’t long before we were at the campground. We’d selected the middle one of three, strangely called Middle Beach Campground because it was the most likely to be quiet, and quiet it was. 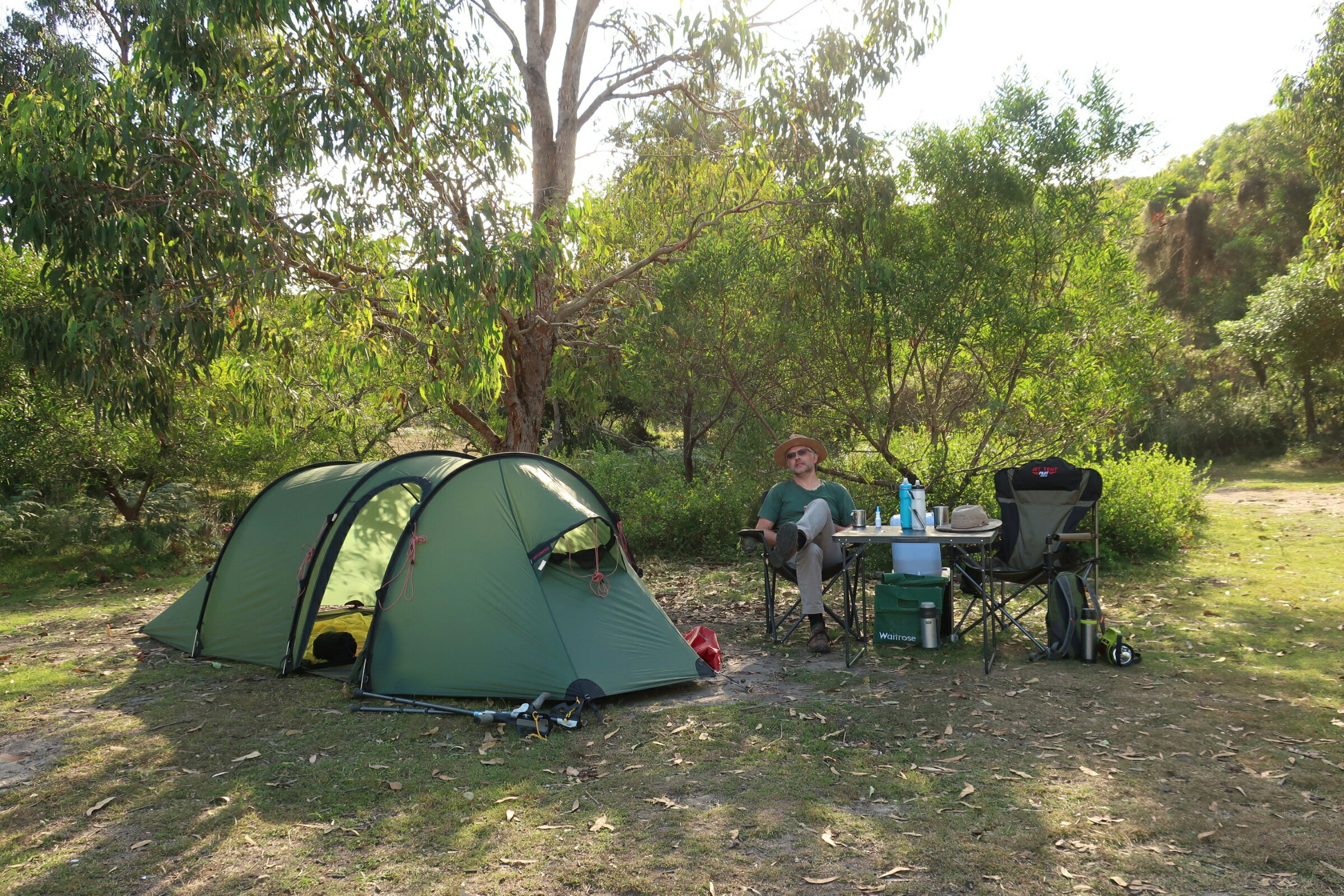 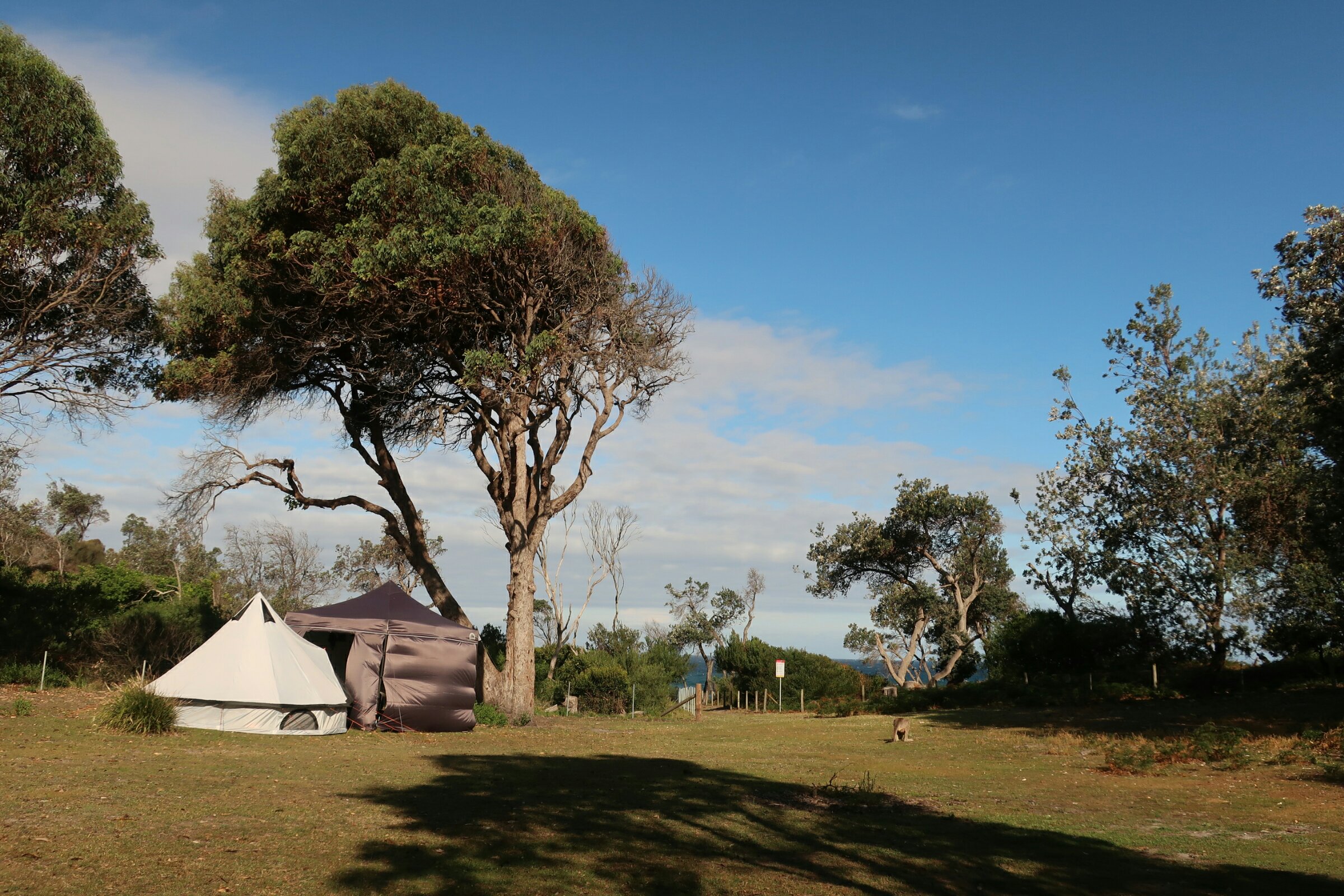 Just beside the post was the path to the beach. It was a surfers’ beach, not a child beach. But it didn’t stop us having a bit of an explore and a small walk along it. 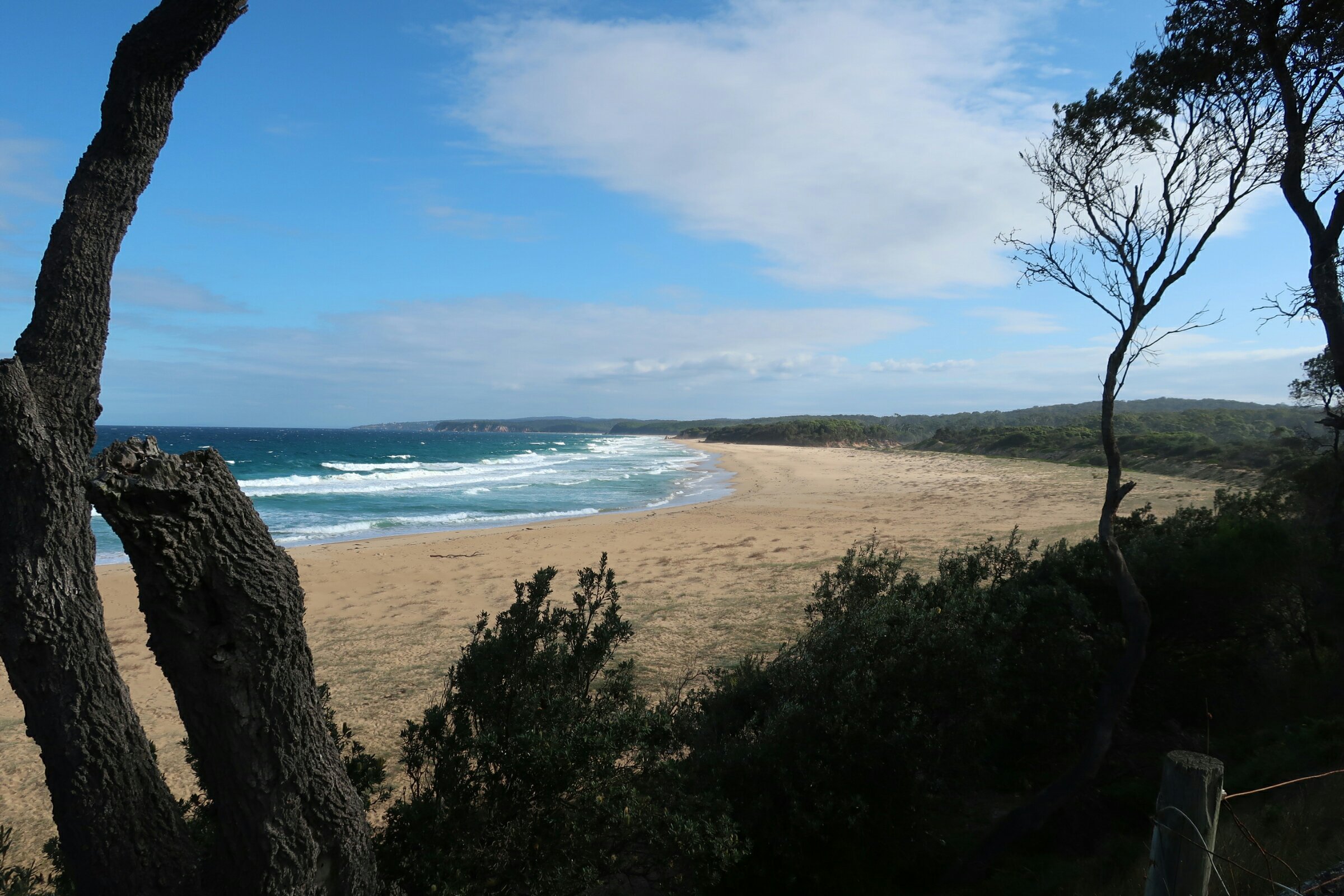 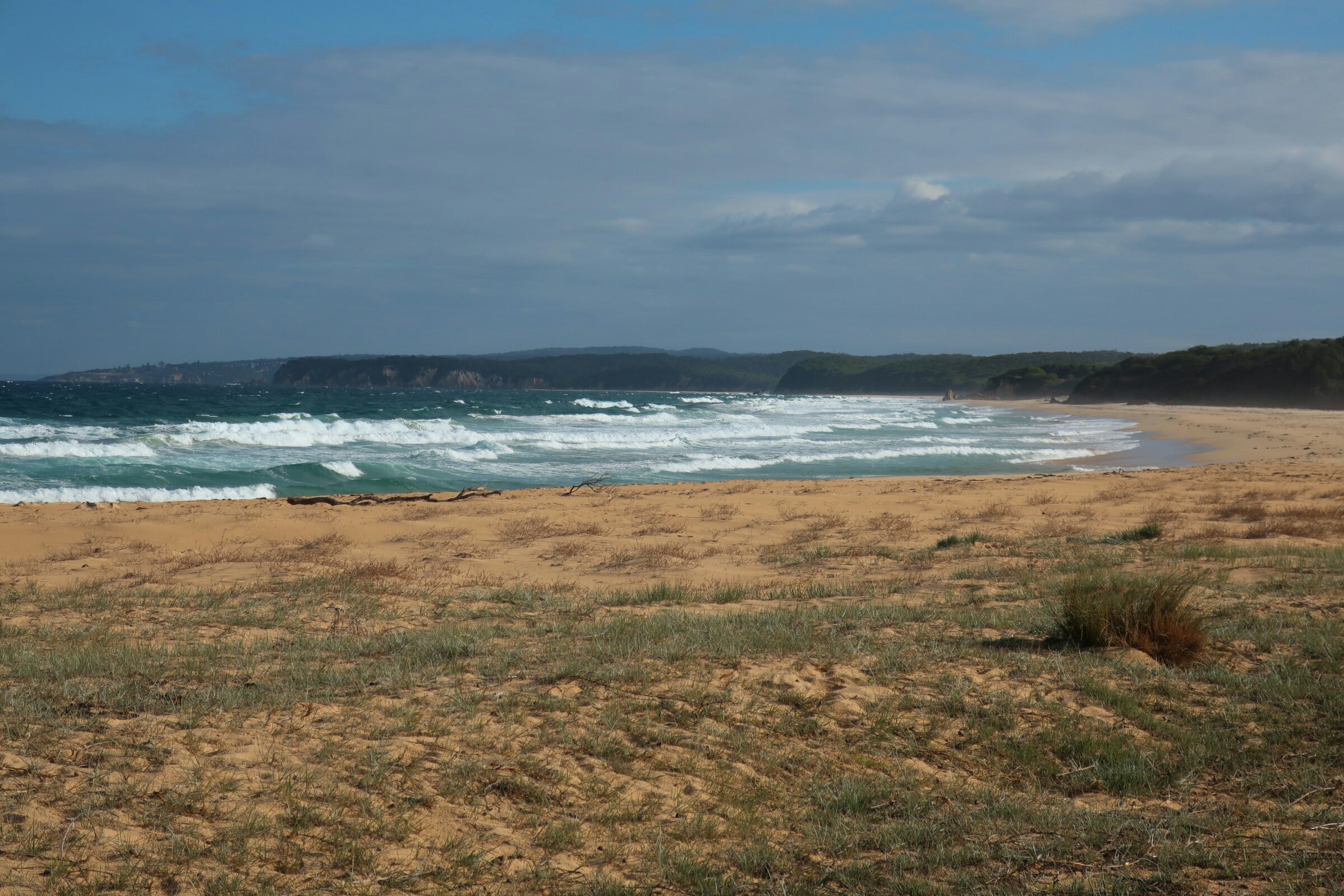 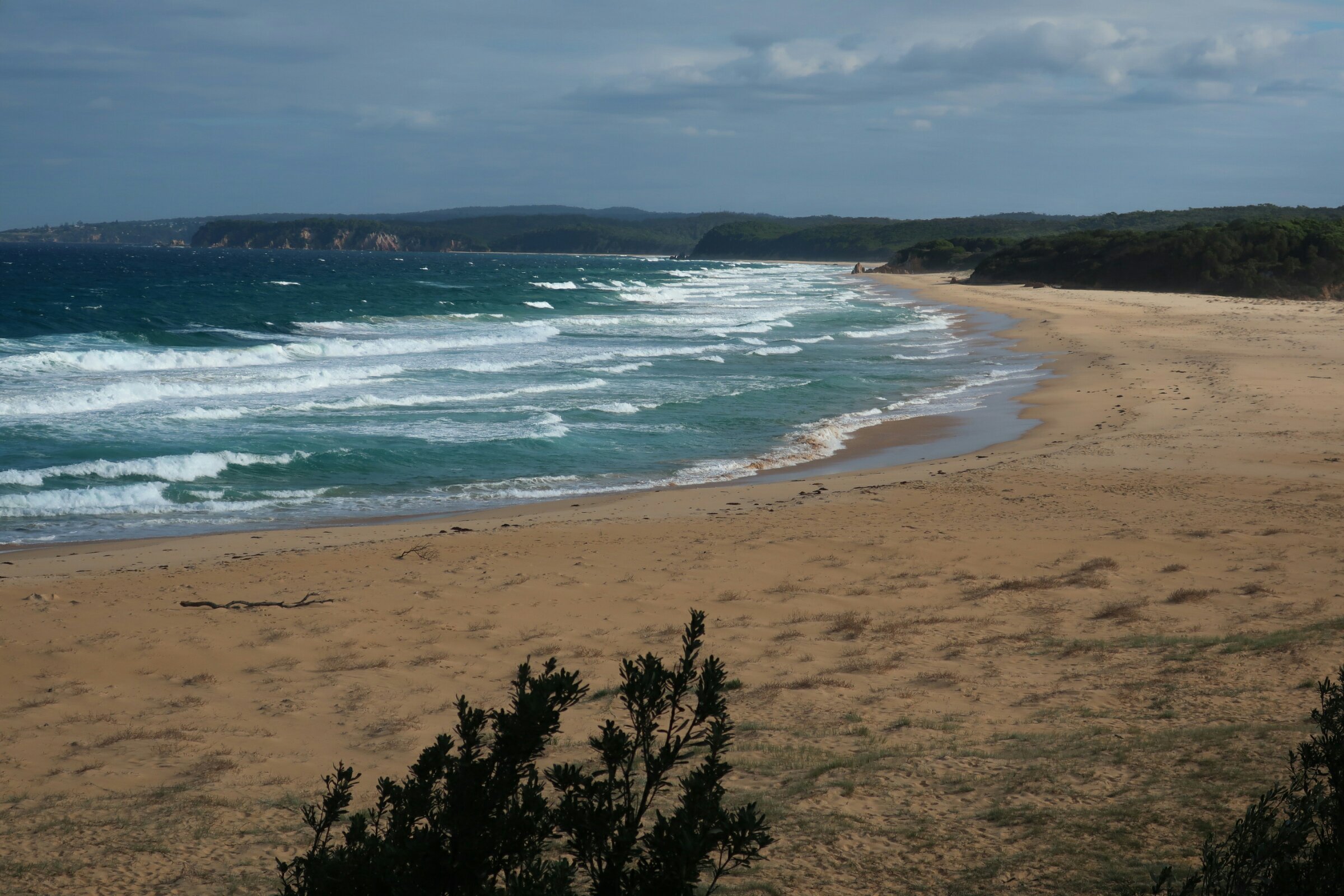 This one gives a calmer view… 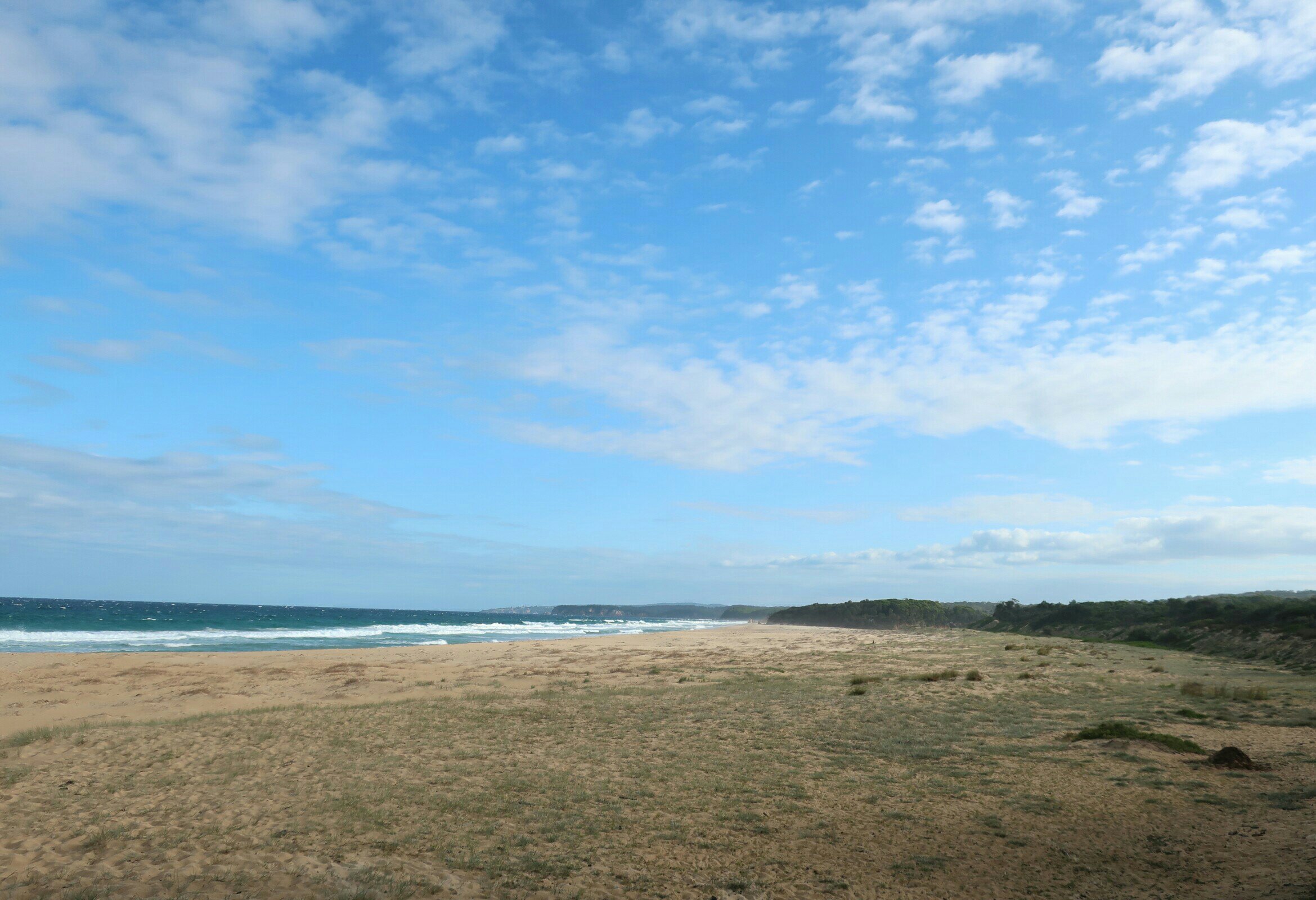 One thing in common is the grass in the foreground and this was something that the kangaroos and the swamp wallabies both liked. 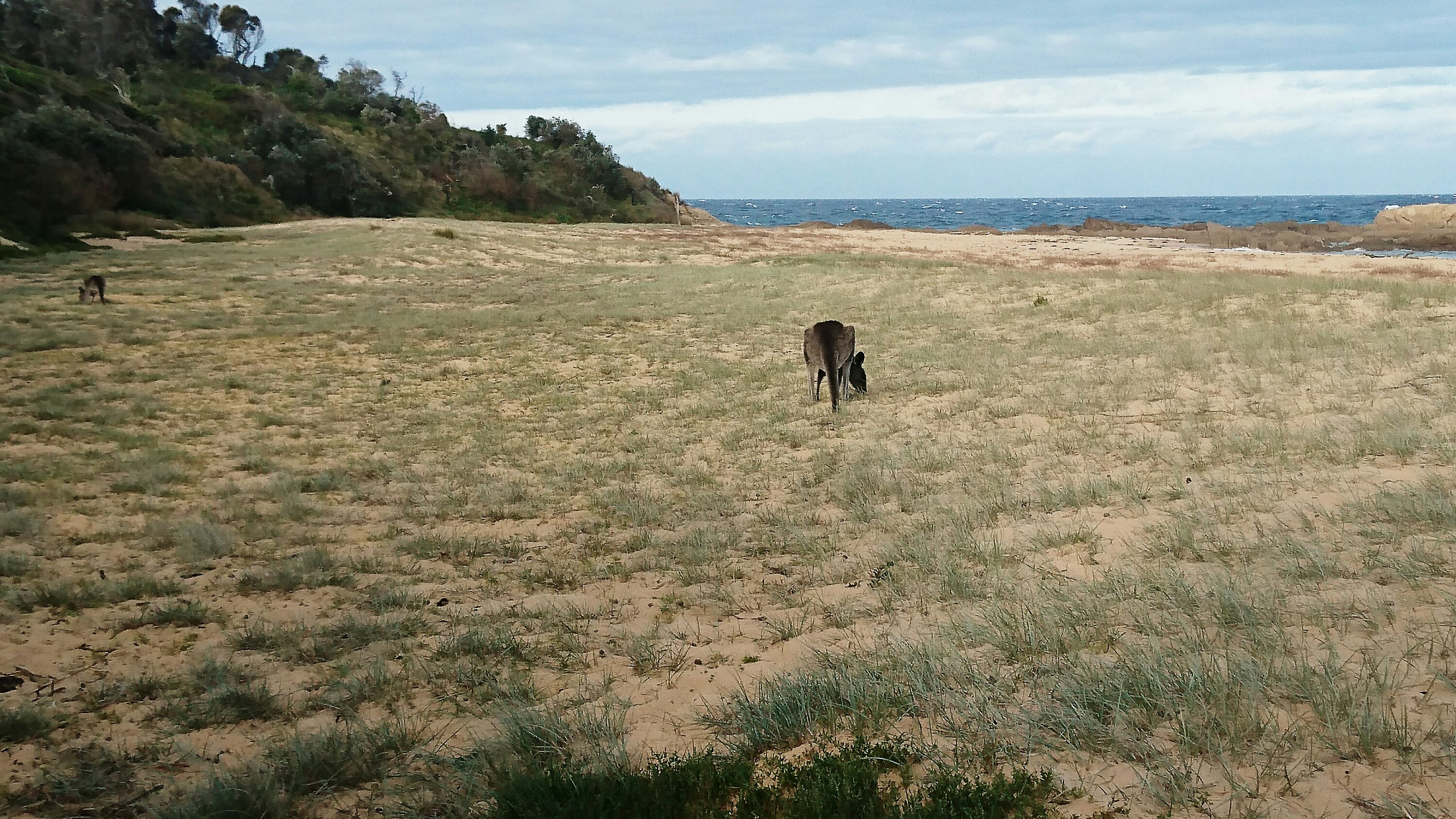 Then it was a case of evening meal, sit around reading, and playing cribbage before an early night. All that walking along the beaches had tired me out completely.