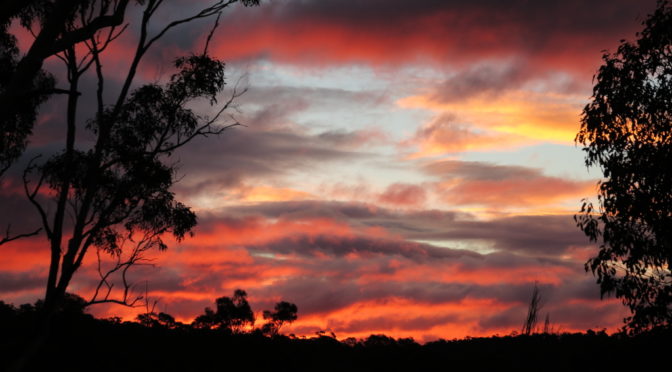 In a day or to we will have the shortest day of the year.  It is odd saying that and knowing it is June, but then sitting here with freezing tootsies and looking at the fire, knowing that we had yet another frost overnight, I do feel like we are in winter! But it is still strange saying it.

The chicks are growing up amazingly fast.  They are 6 weeks old now, but it is still too cold for them to be out with the flock overnight.  I am trying hard to make sure they spend longer and longer outside during the day, but they do like to make sure that I know about it when they want to come in.  The other day when the main flock had gone to roost, I was still busy on the laptop trying to finish something before I took them in.  One of the bigger ones decided I wasn’t paying them enough attention and jumped up onto my knee which happened to have the laptop on it… needless to say typing with a chick on the laptop is not possible and hence they got their way.  They were ready to be rounded up and taken in and didn’t offer any resistance to being caught and put into the pet carrier to be carried inside.  Luckily they are getting the hang of that concept quite quickly so don’t offer much resistance any more!

I posted this picture on a Facebook poultry group with the caption “Have you ever wondered how many 6 week old chicks can fit into 1 small hole left by a post being removed?” and the number of people who asked me how they had all died was unbelievable.  It had never occurred to me people would consider they were dead, or that someone who bury them in such as shallow hole!

On the subject of chooks, Kayley, one of our pullets has started laying in the last week as well.  We are getting a really nice blue egg from her which is a good size given that she is such a small chicken and they are steadily getting bigger each day.

Showering is definitely back to the middle of the day routine now, preferably a sunny day when the laundry room has warmed up and you don’t feel like you are going to freeze the moment you step out of the shower.  Clothes washing is also a sunny day only job now we are back in winter, but usually we don’t have any issues getting the washing dry provided it is hung out before midday.

We have had to make some changes with the chooks.  They are now fenced in most of the day – they have a large run and I try to let them free range for an hour or so in the late afternoon which they really enjoy.  It’s nearly 3 week since I last saw a fox during daylight hours which is great news because it could mean that it has moved on to easier targets elsewhere, but I don’t want to push our luck just yet.

Stuart had some time off last week, so we took the opportunity to visit somewhere else for a change.  It was in between 2 medical appointments (physio and pain management) so there was limited time after we had been to our favourite restaurant, but we managed to get to Canberra’s National Exhibition Centre, aka the new Tourist Information Office.

Then it is time for somewhere new and some new information boards to look at.  These ones relate to why and how Canberra was chosen to be the capital of Australia.  What went on and how was responsible etc.

And then you can have a look at the view.  It wasn’t the best of days being quite hazy, and these are taken through a glass window but they give you an idea.

Well I must apologise for the break, but when I took the chicks out this morning and was trying to get some nice photos of the rest of the flock (they’ll happen in another post), I spotted that some of the girls (the two contenders for top chook) were sporting blood and blooded combs.  Stuart already had gone shopping by then, and luckily a hair dryer was on the list for him to buy because some of the chicks are, well they are a little smelly after they decided to dust bath in sawdust and chook shit yesterday and it’s not warm enough to be washing them and letting them dry out naturally… and one of the chooks was also sporting rather a lot of chook shit on her feathers and it was very smelly and very sticky and wouldn’t come off.  And so this afternoon has been spent washing and drying her.  1½hrs to blow dry a chicken!  Can you believe it?  OH Victor Meldrew mode!

Yes – it really did take that long to get her dry enough to let her out in the chick wardrobe to dry completely.  She is sporting her winter plumage and is very feathery to say the least.  Once in the warm water and over her initial panic, she settled down and started to fall asleep on me!  It did take 2 of us to wash her and clean her.  Stuart opted to clean up her comb, so we used quite a few q-tips up in doing so, but it did at least confirm that it was blood and blood clots on her comb so we can at least say it was a fight and not anything contagious as I first feared!  I got to deal with the shitty feathers.  And it smelt awful.

She then sat on my knee for the next 2 hours whilst I used first a towel and then the new purchased hairdryer to blow dry a chicken.  She is an exceptionally cooperative chicken to say the least.  Now that she has had a few days to sort all her feathering out she looks amazing.  But this is her immediately after being blown dry and me having extracted myself from the chair.  I can confirm that a chicken sitting on your knee whilst you are trying to blow dry it, is not the easiest method but it does allow you to comfort her during her initial moments of panic having never encountered a hairdryer before – funny that really isn’t it.  Evolution has not involved hairdryers in the centuries of chicken breeding!

Sorry, I keep getting side tracked.  It’s Tuesday now, tomorrow is the shortest day.  And we are due another cold night.  In fact it is still too cold for us to have the chicks outside at night.  Which is a pain because although I love listening to their twitterings, their smell is getting overpowering in the morning no matter how often I clean out their wardrobe/cage.  Today has been a very cold start to the day, or should I say more of a miserable I am not going to get warm start to the day.  It has been dense fog for most of the morning.  It still hasn’t burnt off and it hasn’t made it out of single figures yet.

One of the problems of running a forum is having to deal with the member squabbles and arguments and this that and the other.  It can be stressful at times and dealing with irate members who are in a completely different time zone to you is interesting to say the least.  For the moment, at least, things have now quietened down again and only the 1 member walked.  She will probably be back, but I won’t lose sleep if she isn’t.  She was a pain in the ass at the best of times and argumentative deliberately at the worst.  Exactly how you can have such an argument over lemons is beyond me, but there we go.

So a few random pictures that have been added to the files here, but not used for some reason.

Breakfast at the weekend.  It was meant to have been porridge, but after a reading about a discussion on the cooking forum I run, I decided I fancied some and went and made a batch of pikelets whilst waiting for Stuart to get up.

And the Father’s Day cards which we had to have made up especially for the occasion because it isn’t father’s day here in Australia so the cards are not on sale and well, getting them from an online store in the UK with a printed message and name just isn’t the same somehow!

Right, I shall spend the rest of the afternoon variously chasing chickens, chasing magpie larks who keep getting stuck in the old building which is being used as a quarantine for the 6 pullets we came home with from a friend at the weekend (we gave her 1 rooster and came home with 6 pullets we were not expecting!) and then doing a log run (aka getting the night’s wood in) and cooking tea.  When I am done, I will try to get some yarn spun and some photos edited so I can post them up here in the next few days.

And finally, one of the sunsets we have had recently.  These are in time order.  They rarely last long and the clouds that day were flying passed at a speed of knots yet it was totally calm on the ground. 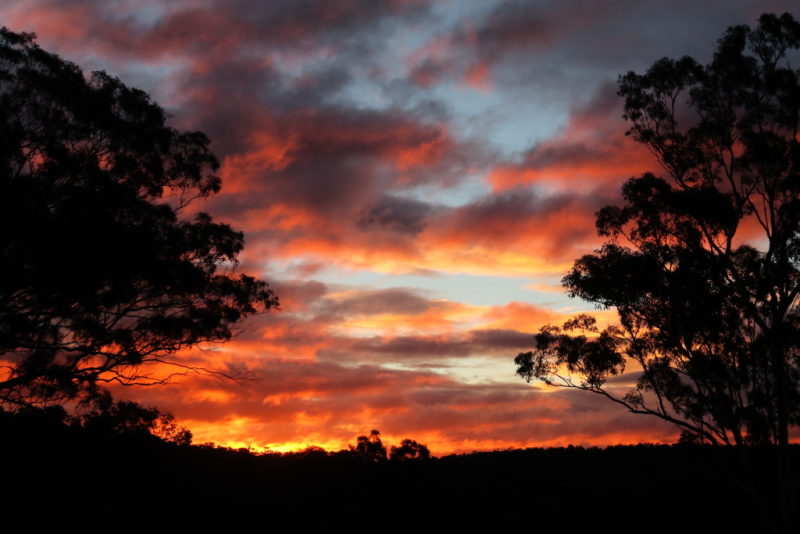 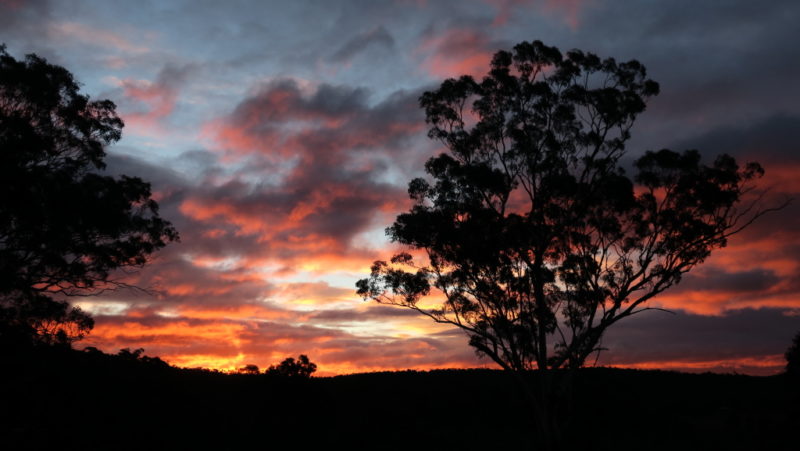 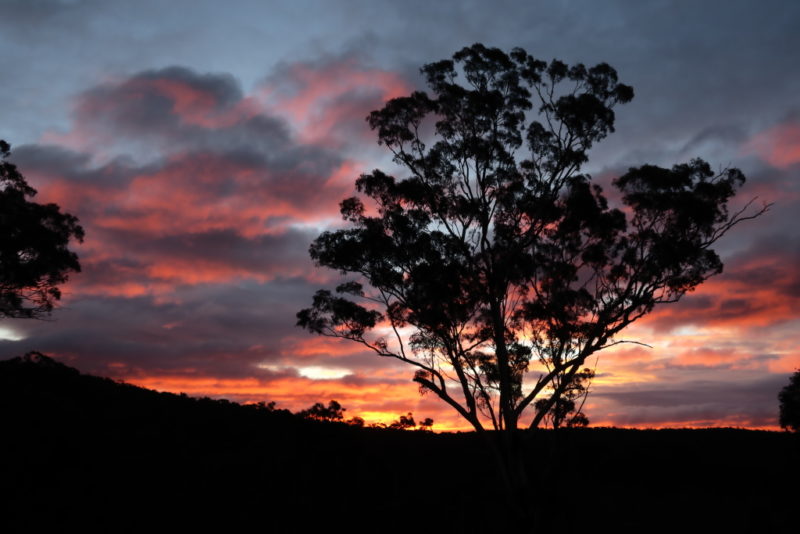 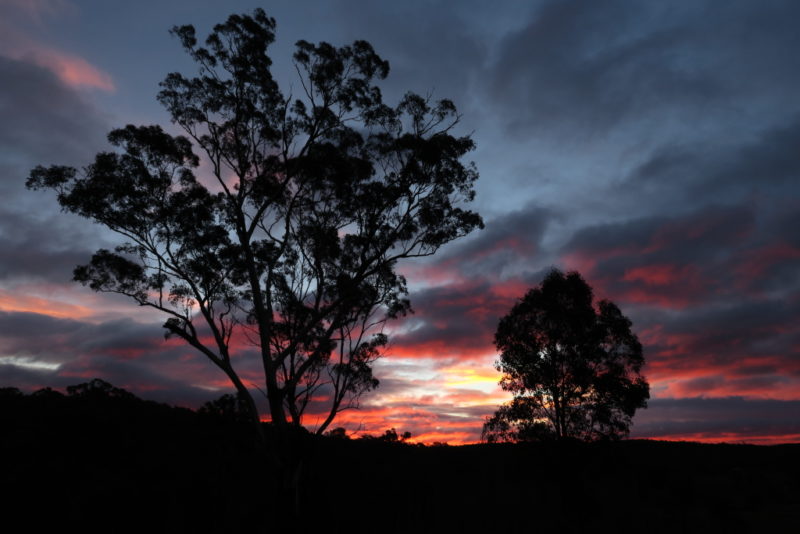 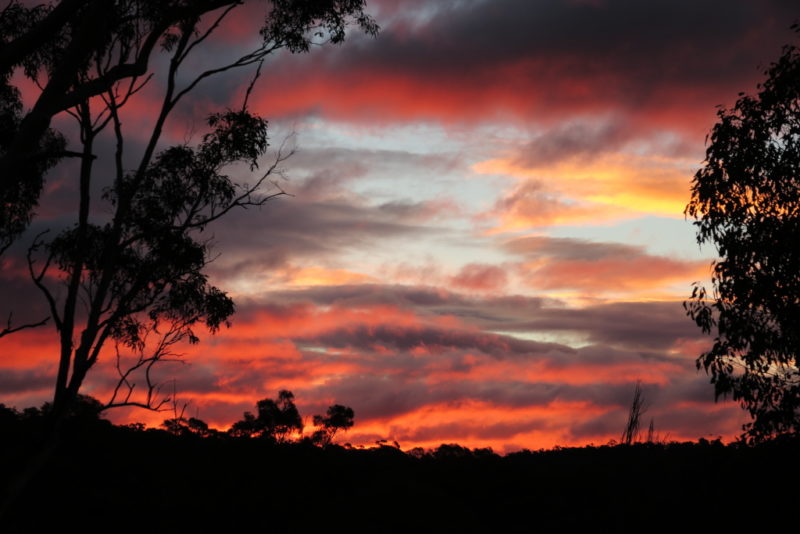