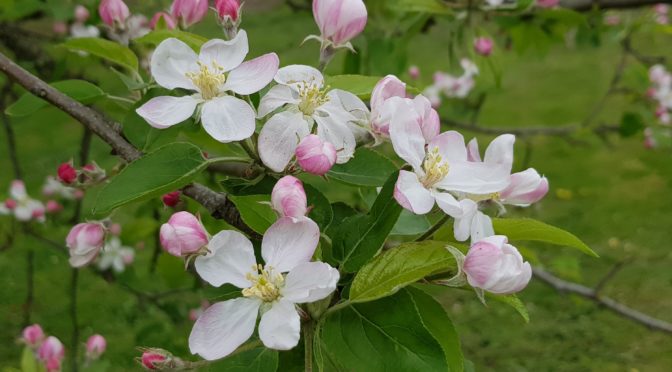 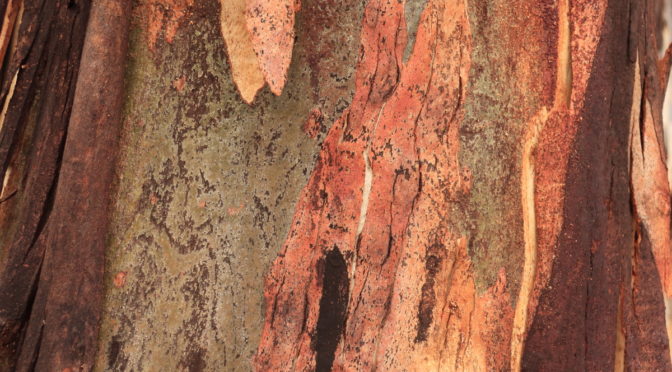 Day 2 arrived bright and clear but didn’t take long to cloud over and for the tops to disappear completely!  The plan for today had always been to get over to Yarrangobilly Caves to get around at least one of the caves and with any luck to use the thermal pools there as well.  But the plan was also to explore a touch as well, and with that came a visit to several viewing points because often you don’t get to see anything unless you stop at these viewing points!

Then it was onwards and upwards and into Eucalyptus rainforest again. 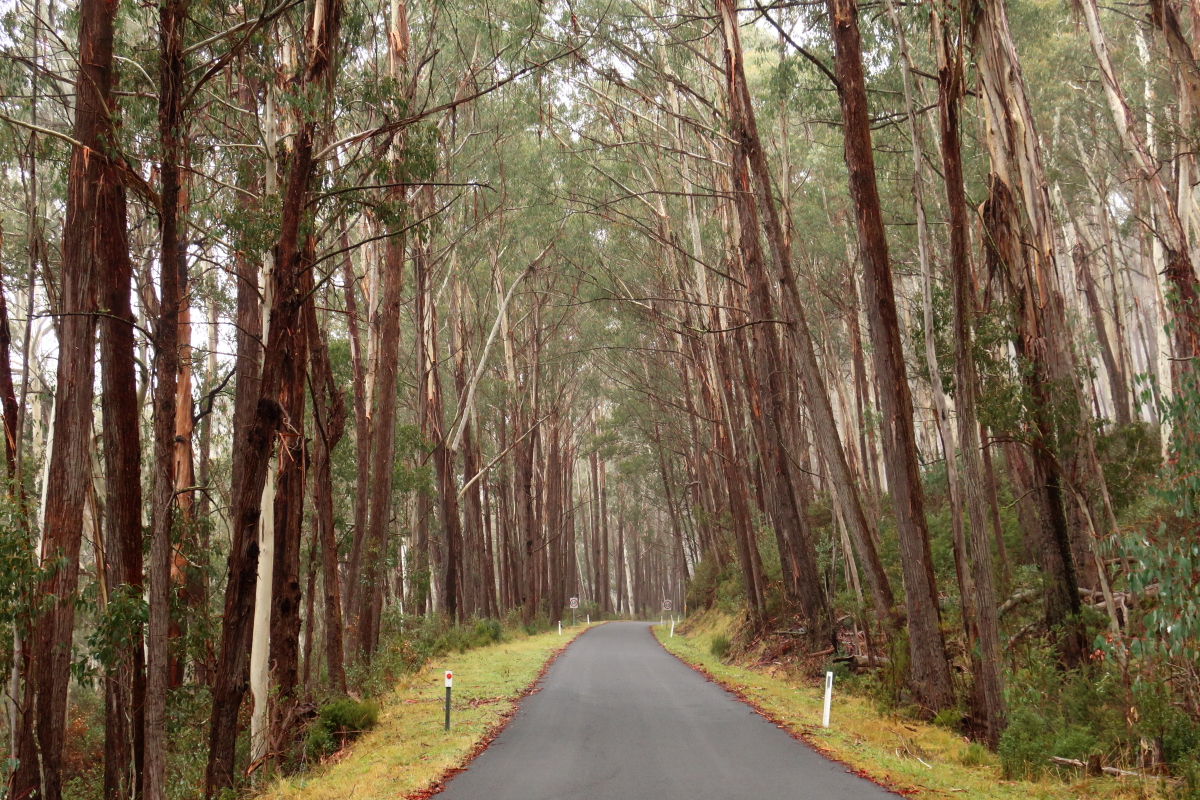 One advantage of quiet roads even if it is part of the Alpine Way, is that you can stop pretty much anywhere and reverse back to that corner where you spotted the photograph that you wanted, wander to the front of the car, take a few photos, review them, decide that you should have been standing in the exact middle of the road instead and move there, now take another few photos, review those whilst standing in exactly the middle of the road, decide they are ok, wander back to the car and get back into it, all the time knowing that the likelihood of meeting any traffic in any direction is approximately zero…  oh course should you be needed help in an emergency – well this is Australia.  You are expected to be able to look after yourself or simply not be out there anyway!

Then after a number of kilometres and a reasonable amount of height gained, we met this… 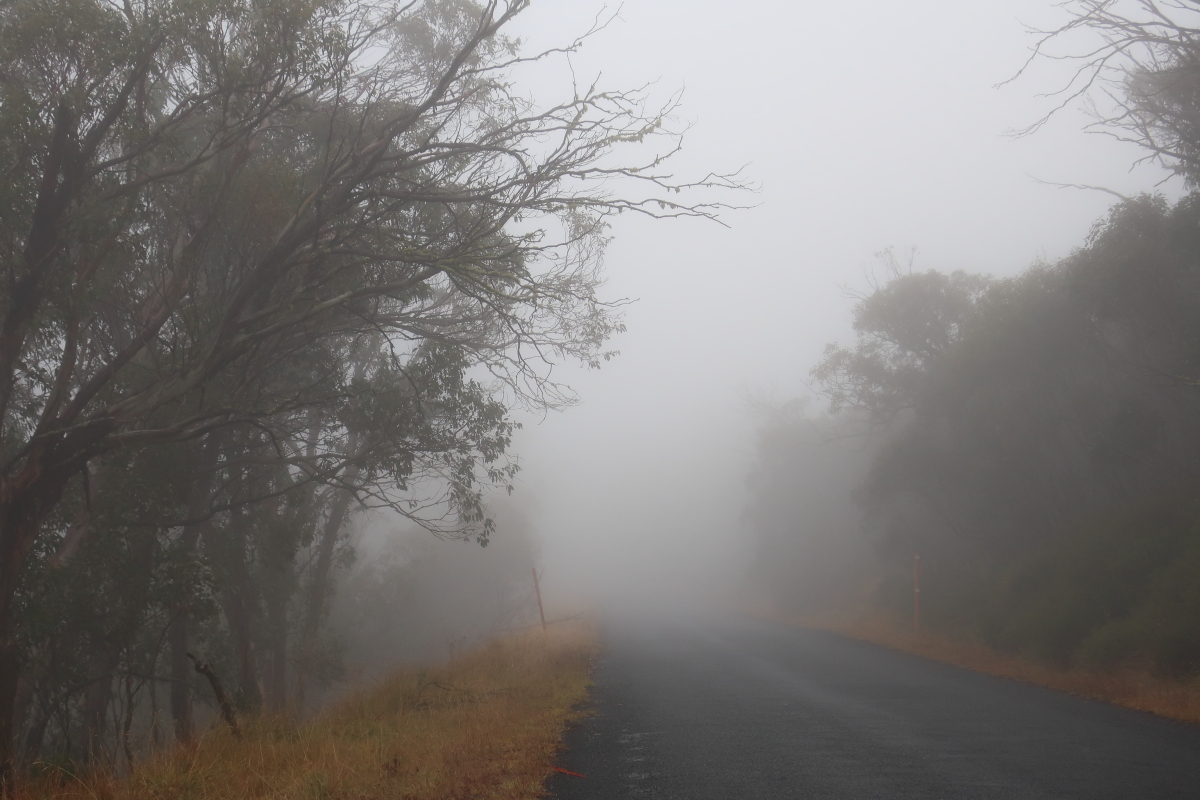 … low cloud.  We had driven into it and we had well over 100km to travel at or above this height.  And then we met this… 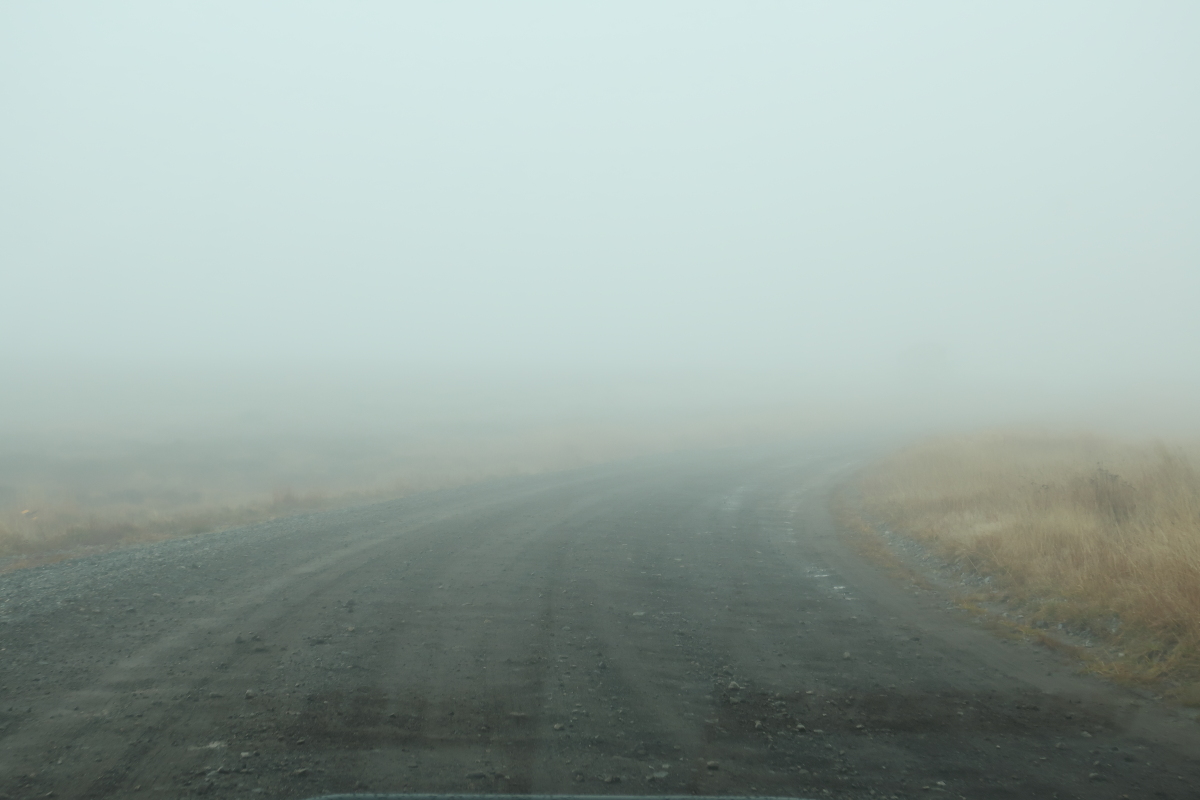 … and it wasn’t to get any better until we were to suddenly find ourselves in the middle of a massive carpark marked out in yellow road markings.  It had us utterly confused until we exited it and realised that we had entered the ski resort from the ‘unplanned’ entrance.  Not the one that they expected you to use but that had existed presumably long before the ski resort had.  Luckily it was too early in the season and the car park deserted.

From there it was to the visitors’ centre at the caves and lunch and a hot drink.  We had forgotten to even pack the flasks let alone bring them with us today.

We made arrangements to be taken around the cave that has wheelchair access.  There is a special narrow wheelchair that they can use and I needed this because of the steps, and the continual staring at the ceiling which currently sends my arms numb making using crutches rather difficult.

Whilst we were waiting for our ‘private’ viewing, (there was an extra member of staff that day and she volunteered to take us around before the 3:30pm scheduled guided tour) I had a nosy around some of the eucalyptus trees around the car park.  I love the colours of the bark and the patterns and several of the trees caught my eye but one in particular was extra special.  On one side the colours were like this 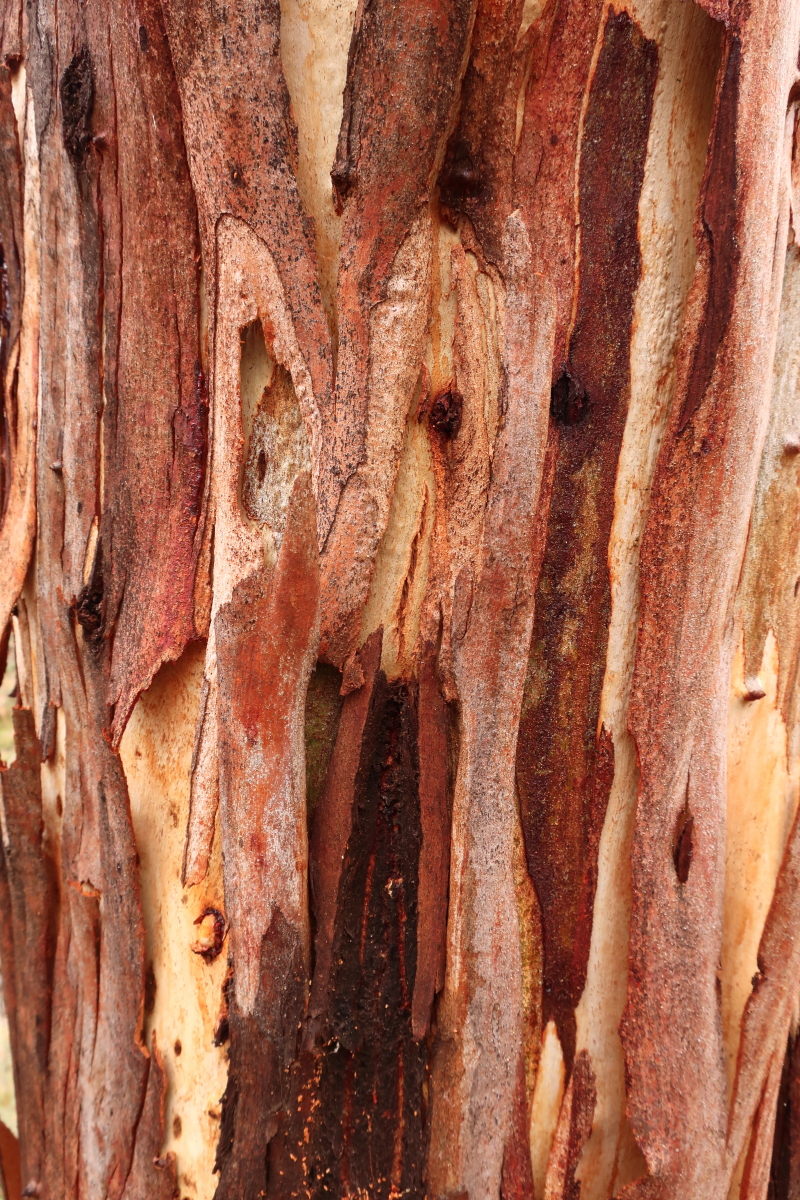 No enhancements made, no extra saturation, nothing.  Just as it was recorded.  Magic isn’t it?  And on the other side of the tree… 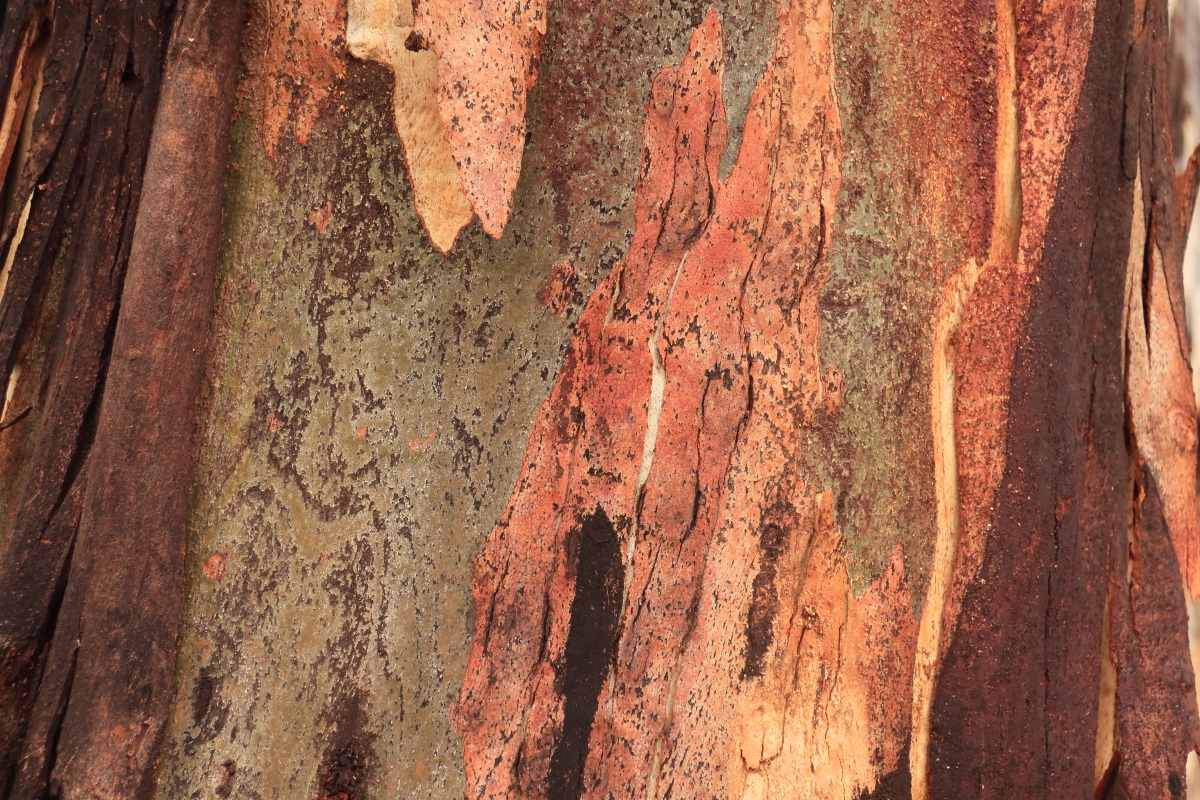 … were these wonderful greens (which might not be coming through as well as they could be!)

Then it was onto the caves.  The area is a limestone and I gather that there is not a lot of limestone around in Australia generally because this patch is something like only 11km by 1.5km.  Water erodes the limestone, which makes the caves and then also drips back into the caves making the most amazing shapes.  Not just stalactites and stalagmites, but shawls and straws and corals and more… 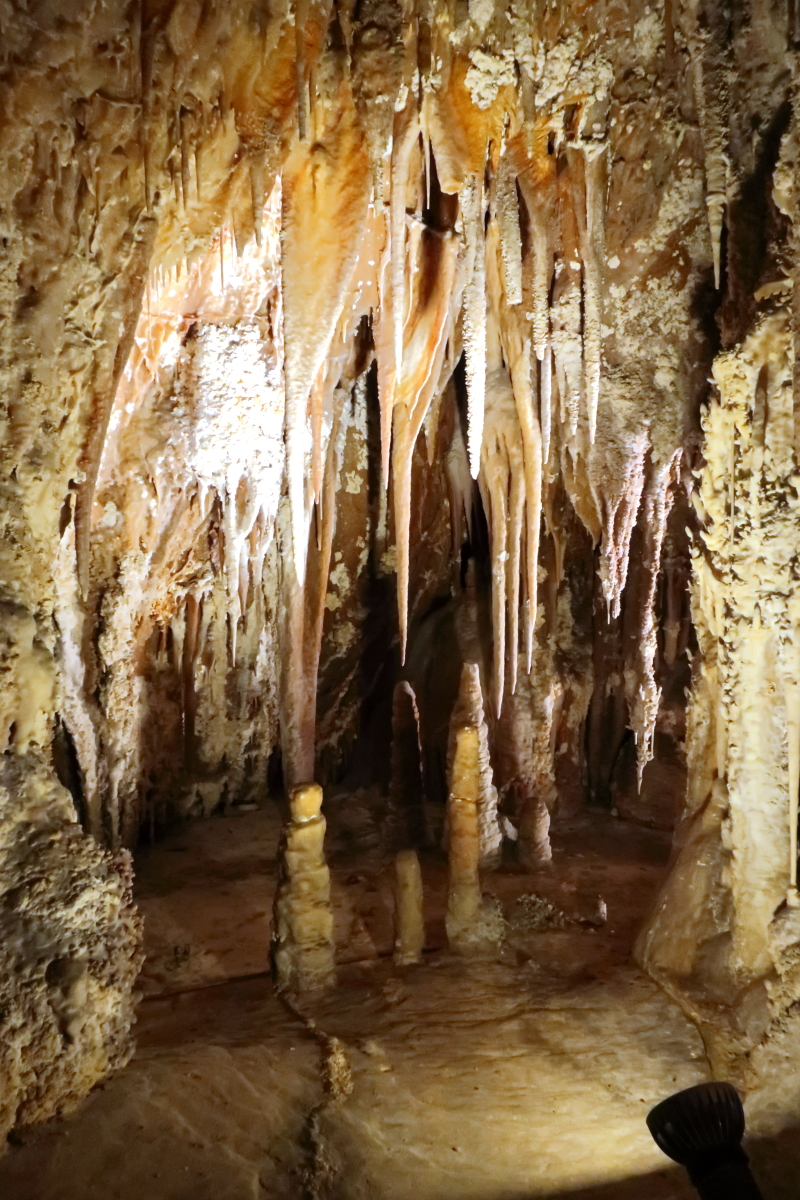 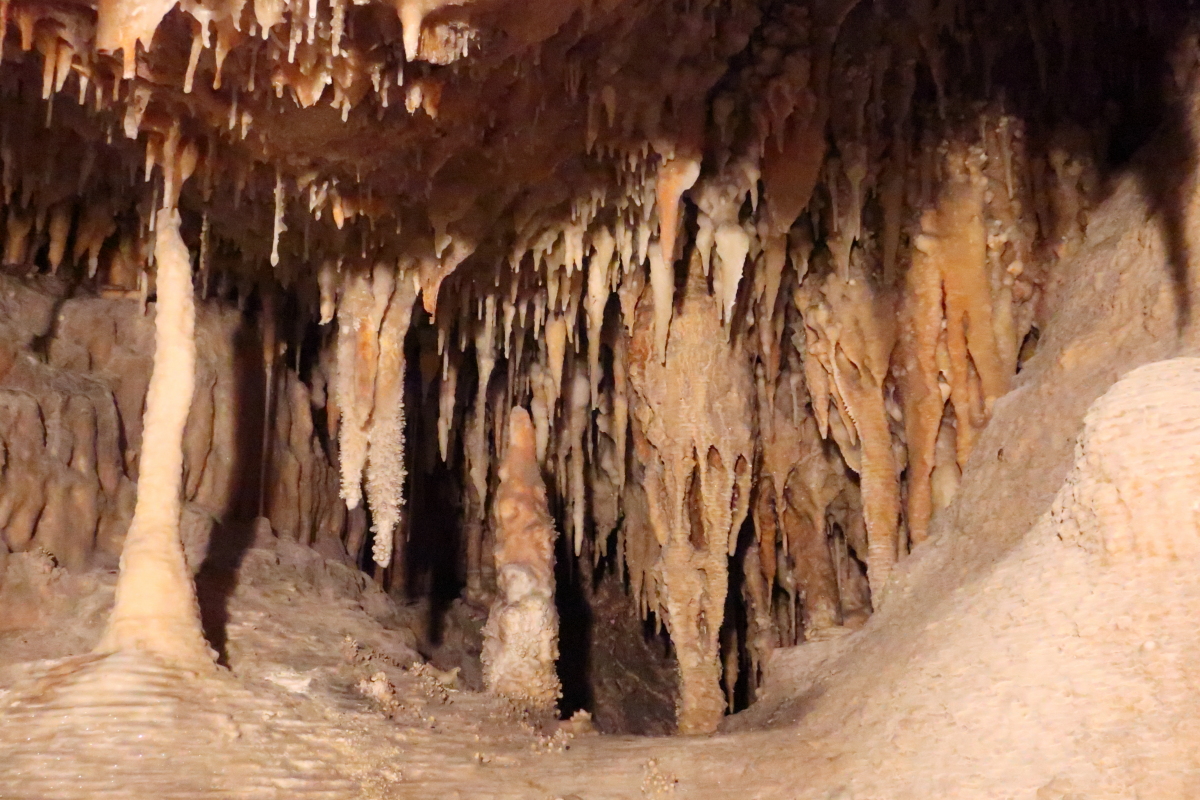 This cave is famous for its corals, shawls and straws that have formed.

Now can you spot the crocodile teeth and the set of dentures? 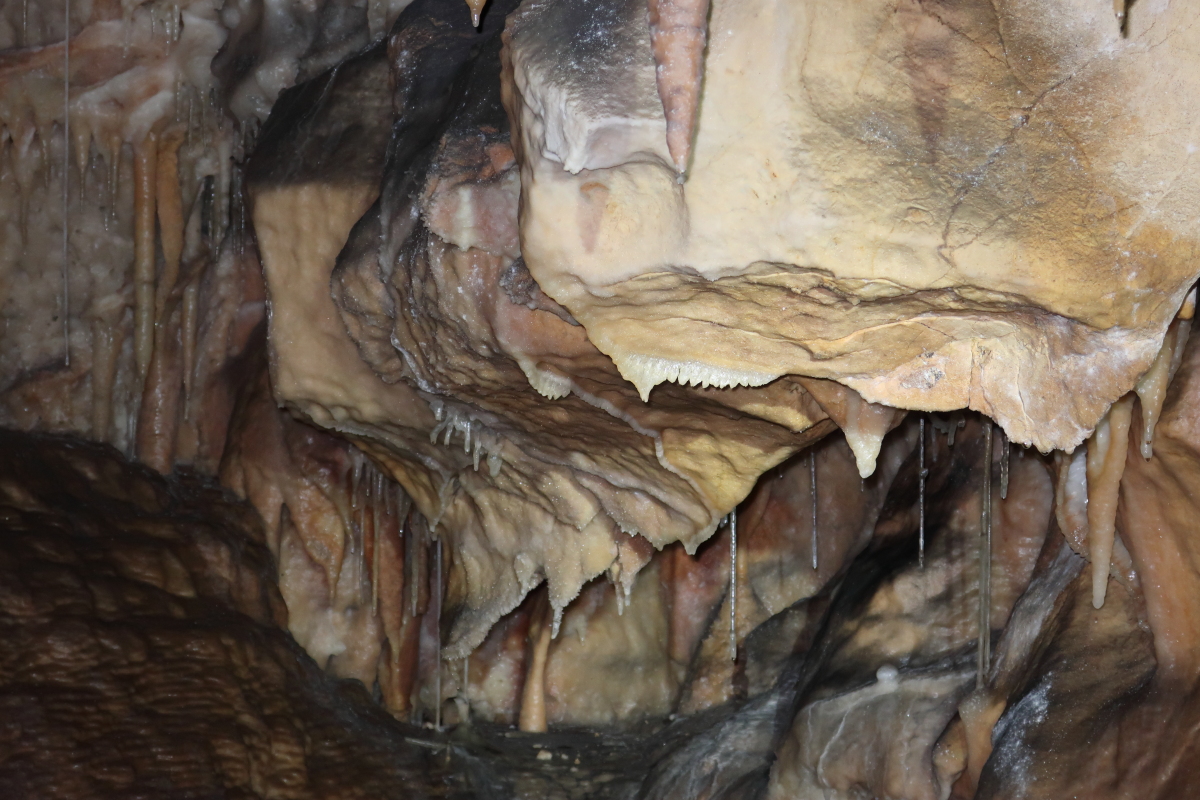 In the background are also the ‘straws’ that form abundantly in this cave.  They are hollow.  Examples are available to be seen in the cave.

Finally, there is a stalagmite that was cut through when the cave was first opened back before the WWI and it shows a remarkable history that would probably not be available nowadays.  Those black lines are soot from massive bush fires back over 400,000 years ago (the soot has been carbon dated). 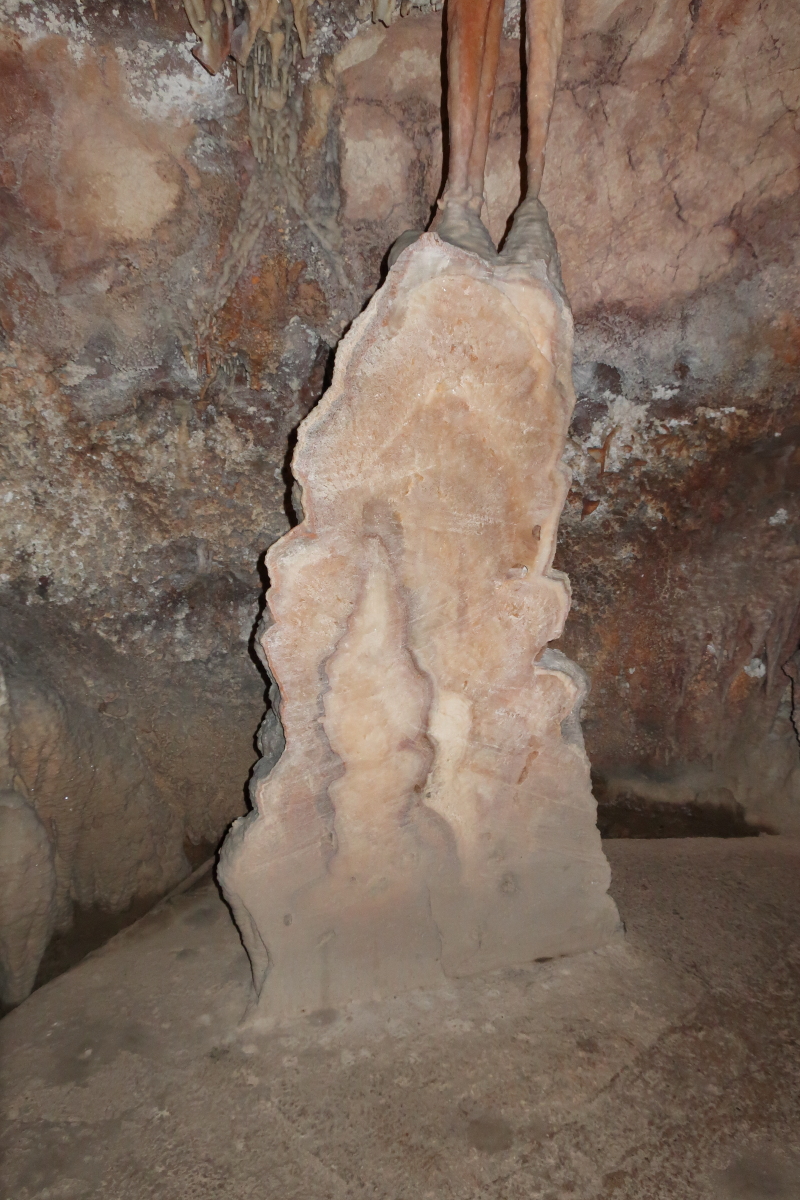 We thoroughly enjoyed the tour, stayed inside longer than we should have done (we were meant to be out by the timing on the next scheduled tour in case the wheelchair was needed, we weren’t but it wasn’t!)…. we can really recommend the guide gave tours.