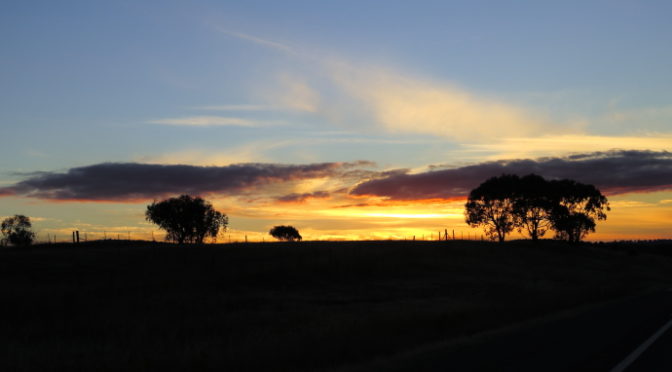 And so the day mum has been waiting for.  I have finally got to the 4th January when we went to see a family friend in Sydney.  It was a very early start and a long journey.  We had to be up and out as soon as possible because it was a 4 hour journey each way and although we had been offered accommodation, it is difficult with both my back and the very young chicks at the moment.  In fact this day was the first day that we had left the chicks alone with mum all day and not been around and there are very many hazards for chicks to kill themselves in/on or just generally… such as the 3 ponds for instance which on a very hot day like this one was, are a water source that the chicks try to balance on the edge of to drink from.  Now its OK with the bigger hens, though occasionally they also take an unexpected dip (as has our rooster who suddenly established he could actually stand up in one of the ponds and pretended he hadn’t fallen in at all!  He hasn’t repeated the exercise mind you!).

So breakfast was taken on the veranda as always, the chicks and the chooks were fed and various treats left out for them.  Frozen water bottles were put into the washing up bowl they have on the veranda of fresh water too keep it cool.  We were not expecting to be back until well after they had gone to roost and we were out of the house by 7:15am and on the road, heading out in a direction we have ventured into before but it was not long before we were in new territory.  We had arranged with Liz and Alec to take our own food because of my dairy allergy, plus we had no idea what Australian service stations were like (and it was a good thing we had taken our own food).  So the car was packed with 2 meals each, and so many snacks we could have fed a small army.  It was also full of cold drinks, a flask of hot water and some almond milk.  Christmas cake went without saying and a large slice was soon eated at the first service station which was, well basically a set of toilets inside and a McCafe (that’s a McDonalds café branch rather than a restaurant).  The café did have soya milk and were however able to do me a soya latte which was nice.  But it was basically the only drink I could have other than black coffee (way too strong and gives me heart burn if I drink more than one cup) or cold water and we had both those in the car.  Other than chips (of course they did chips) there was nothing I could eat.  So sadly it was into the car for Christmas cake – I joke.  This year’s cake was exceptionally nice and moist and everyone who tried it has loved it.  Unlike last year when we didn’t finish it before we actually left the country – with us eating a large slice of it on the plane (!) this cake was pretty much polished off the following weekend.

Then it was on and upwards.  Literally north, but downhill and watching the air temperature rise and rise.  The night before we had checked out the route and registered the car and our credit card for a electronic pass, but the visitors pass which is only valid for one month.  I had also worked out that if we came off one exit prior to the one that made sense for their home, we would save AUD $6 each way because we were only doing the M7 and not the M7 & M2… travelling that extra kilometre and joining the M2 costs a lot of money and with the car having built in sat nav, and the 4G signal on both phones allowing for immediate google maps or other such navigational tools, we didn’t need to spend $12 unnecessarily!  Sorry but it all adds up.

We arrived with only the one minor issue very close to where they live; a road had been made into a one-way zone in the other direction, but the car’s sat nav made short work of re-routing us and we were able to find their home without any problems.

So Alec and Liz Fisher, we have finally met you.  It has only taken mumble, mumble, 7 months of us getting our act together, though in all fairness it was to prove to be around 2 hours more travelling than my back could manage even taking breaks every 75 minutes!

We arrived just before lunch and it wasn’t long before the family photos had come out and pictures of David and I when Liz and Alec.

And so we talked and talked and talked.  And I have no idea as to what, but we covered all sorts of topics from the photos to the possums living in their roof to Stuart and I being in Australia.  Long after lunch and after another drink and Christmas Cake, I sent Stuart off with the camera (I couldn’t walk very well from too much sitting down. It seems to compress nerves and leaves my right leg hard to control, plus I was in a lot of pain, so it was a go play with my camera day for Stuart).  He was meant to take some photos of the house.  I suppose he did…

Their back garden and the canoes.  Alec is still out canoeing quite frequently.

Part of their front garden.  Despite being only 4 hours up the coast and around 250km or so north of us, they live in a completely different and almost tropical climate.  Here most of the plants in the garden whether in pots or the ground, would have long since died of the cold!

I’m not sure why we ended up with a photo of the fish tank, but we did.  Stuart failed on the pictures of the inside of the house really, there is nothing for mum who I believe had wanted to see what the house looked like now. Much the same from what I understand from when you last visited.

The possum.  I have no idea why the mop is there, perhaps it is to hold the possum or the roof up or simply was there to plug a gap or allow access in and out of the house for the possum who I understand tends to wander around the house and often sits on the computer or the desk whilst Alec is at it.

The nose in the centre is of a baby possum that the mum above has.

I finally got my hands of the camera and just before we were due to leave (around 5:30pm, we still had a 4 hour journey home) I managed to get the photos I think my mother was after… 😀

During the day, Sue (?) I gather mum knows her and can correct my poor memory if I have the wrong name, turned up all in a fluster.  She is selling a car at the moment and something somehow happed to her house key and she was locked out of her house.  A cuppa and some Christmas cake helped and she also started on the family stories and generally talking to us and was around when the camera came out, so I convinced her to stand still for a couple.  She is as bad a Liz and Alec for not wanting to be in a picture, but I did manage to get one or two…

We were finally on our way home.  This is actually a motorway even by the name and signposts.  It is the equivalent the M25 around London and this was rush hour.  OK this is the summer holiday and the kids are all on holiday until the end of January but all the same…

Oh and cyclists are allowed to cycle along the hard shoulder which isn’t a hard shoulder but actually labelled as a cycle lane with dedicated crossing points at the slip roads!  And we saw cyclists using it.  Can’t blame them having cycled down quite a few motorways or autobahns ourselves.

And again we had a great sunset.  This was taken from a moving vehicle doing 110kph I think!

One thing that did surprise us was, please make sure that you are sitting down for this, we deliberately stopped at a different service station on the way back (so read petrol station and separate KFC for this one) was that we actually preferred the McCafe option!  That is worrying!  But the truckers part of the KFC service station (think of the A road services in the UK, such as the one just past the M3/A303 junction and you have that concept) had some maps and we have finally found a sensible scale map of our local area.  Something that isn’t 1:800,000 or even 1:1,400,000 (I kid not) and shows the local dirt roads such as ours!  We bought it.  It is going to be a revelation.

We finally got home long after dark (it goes dark very quickly here, there is not much time to work out that it is happening before it has happened and you can actually see it go dark if you watch) and the girls (and HP) were all safely roosted for the night. The chicks were safe and there were 5 eggs waiting for us.