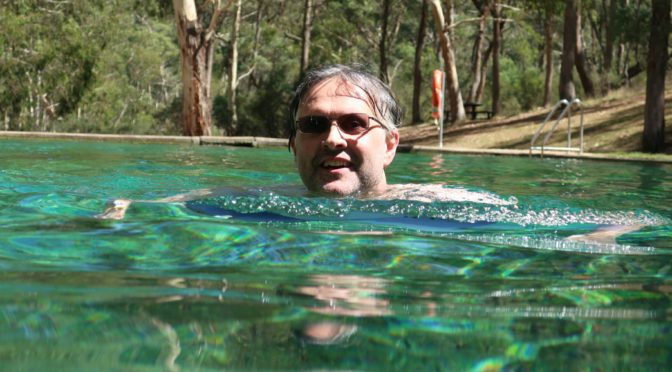 On the way back from Tantangara Reservoir, there was chance to view life from another angle and on one of these stops we were to get chance to look at some of the smaller wildlife that attacks the trees. This kind of tree art leaves the trees affected known as squiggly bark. Actually it is known as scribbly gum and there are 3 species of Eucalyptus that have this name, Eucalyptus haemastoma, Eucalyptus racemosa and Eucalyptus rossii. These trees are likely one of the first two, but I prefer the name squiggly!

The scribbly gum is a native Australian eucalyptus tree which is easy to spot because of the distinctive markings along its smooth yellow-grey trunk. These zig-zag tracks or ‘scribbles’ are made by the moth grub as it tunnels between the old and new bark. Every year when the tree sheds the old bark, new markings are revealed.

But my favourite photo from there is this one. 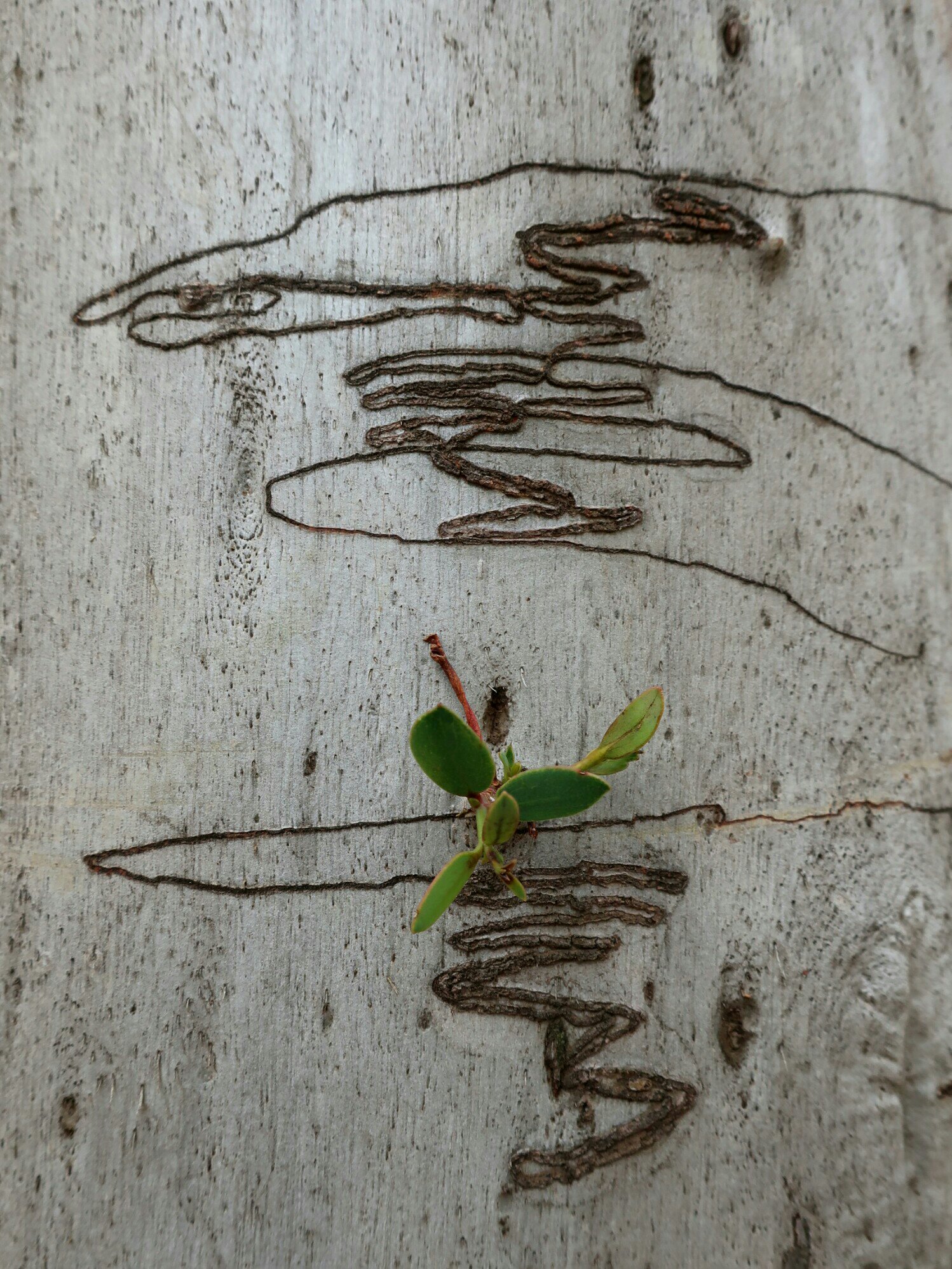 After a wander around, we headed back to Yarrangobilly Caves. It was too late in the morning to go for a dip in the pools, but too early for lunch. Time for a lazy morning chilling out in the sun at one of the BBQ points. Here they had water, gas BBQs and many tables and benches. But before long they were in the sun and we wanted shade, so our came the camping chairs and a long lunch and discussions about where to stay tonight. A decision was made, we’d stay in the national park area for another night before moving on. It meant that we could have a relaxed dip in the pool and not worry about getting somewhere before it went dark etc.

So once lunch had been had, flasks topped back up and tea towels dried in the sun (plus towels, the camping type), we headed over to the reception area to make arrangements to be taken down to the pool and to be picked back up. It was a steep 700m climb back up the mountain to the car park. Steeper and longer than I can manage especially after a dip in a thermal pool.

Now thermal pool, the idea that forms in your head is of something warm isn’t it? Well it wasn’t anywhere near as warm as expected and dip? Yep, even head under I couldn’t reach the bottom at the shallow end unless I was in one particular area… It was definitely a dip. Actually it wasn’t because you couldn’t really stop swimming because the sides were slimy and there wasn’t really anything to hold on to… So swim we did.

This has been tree one thing Stuart had wanted to do, visit the thermal pools. He was so happy and it was great to be in the water again swimming after all these years. It is the first time I have swum since my back went 4 years ago. But it wasn’t that warm at 27°C, at least in the water it wasn’t. I gather that once you got out and then back in again it was another matter entirely. 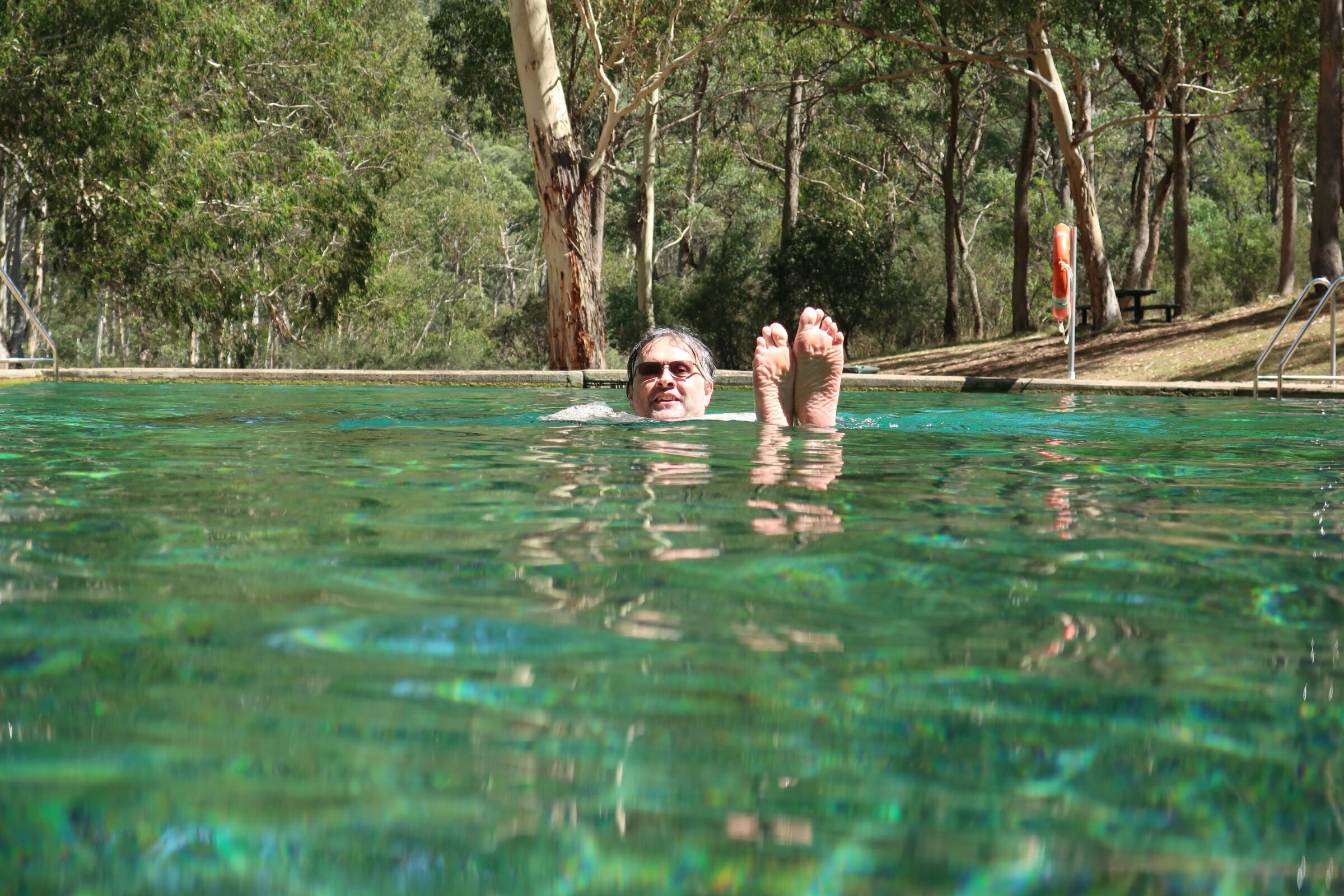 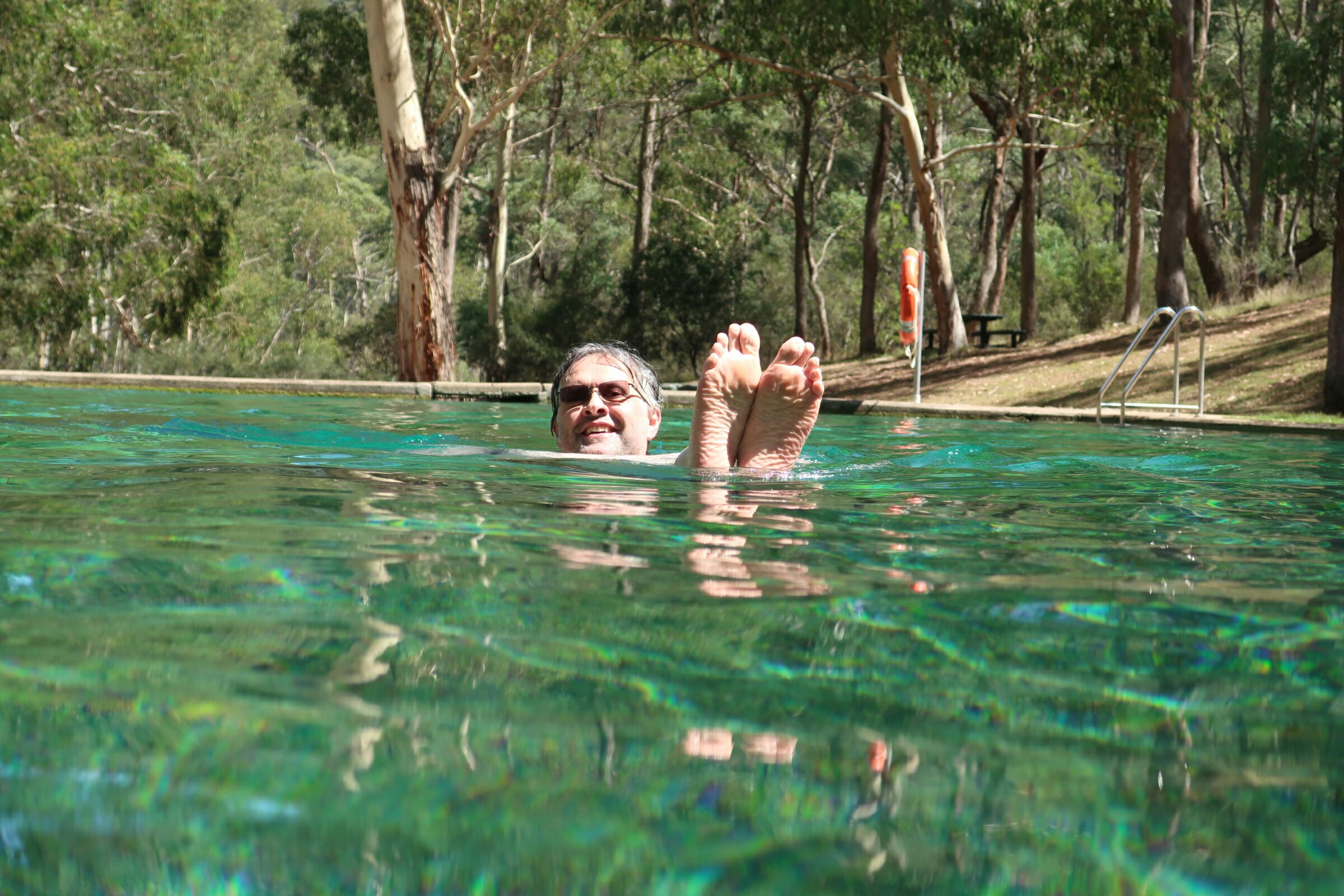 Stuart decided to swim towards me feet first, so feet were what you got in the photo, right until… 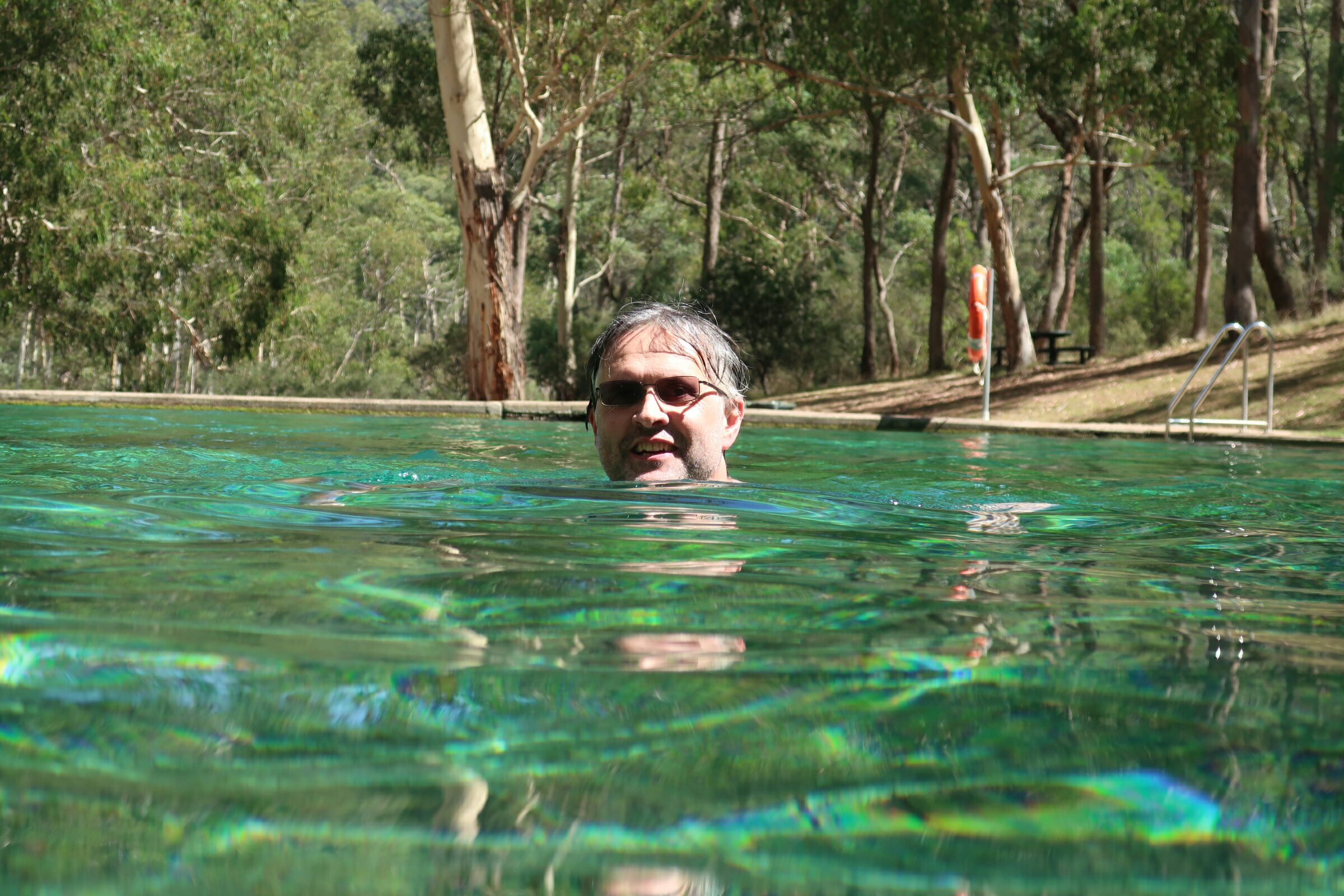 Behaving, that’s what you thought isn’t it? 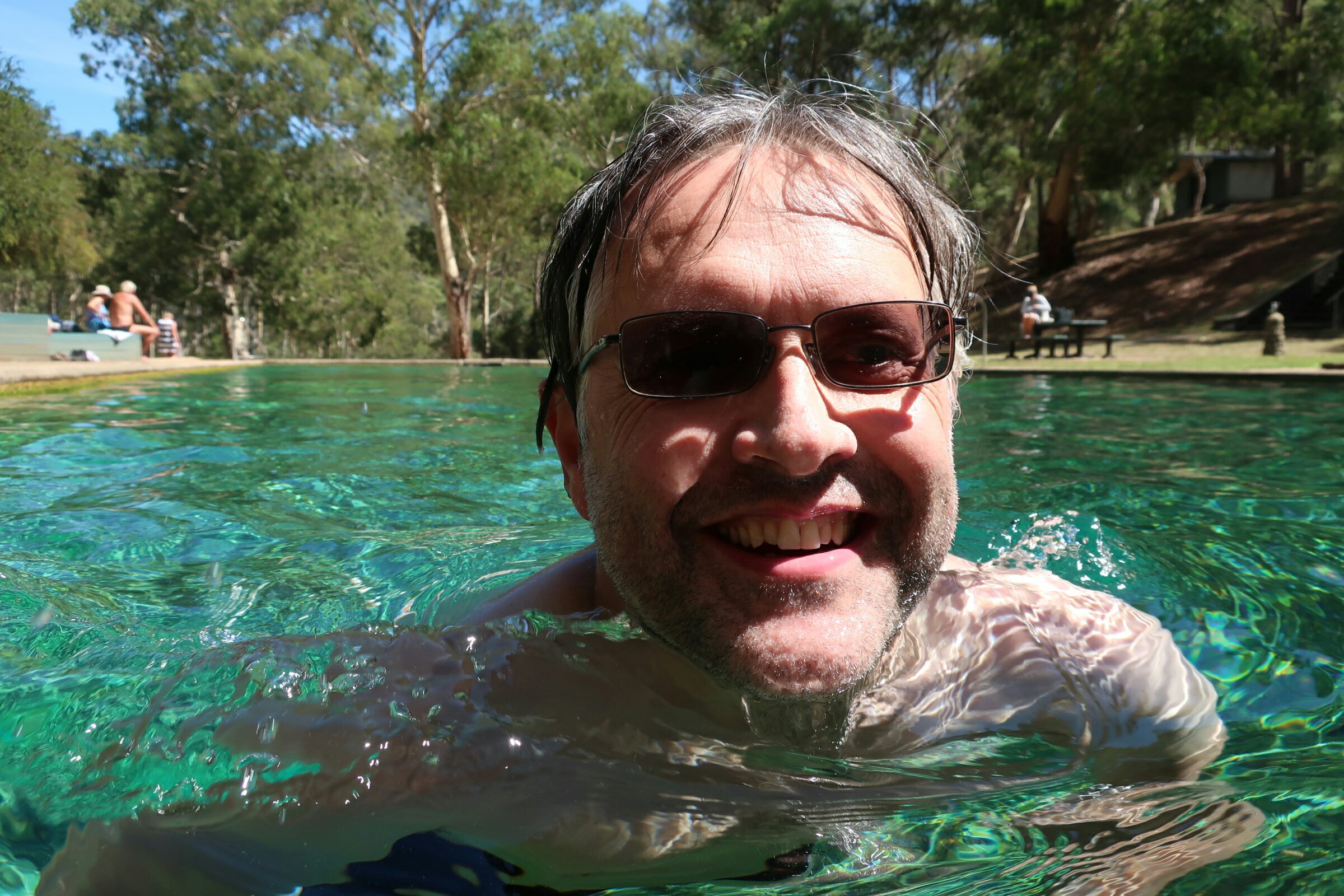 I did let him try photoing me, but even with the nice colour of the water, I don’t photo well. We had 1 1/2 hrs at the pool which by the time we had changed left about 60 minutes in the water. We stayed in much longer than anyone else mind you! 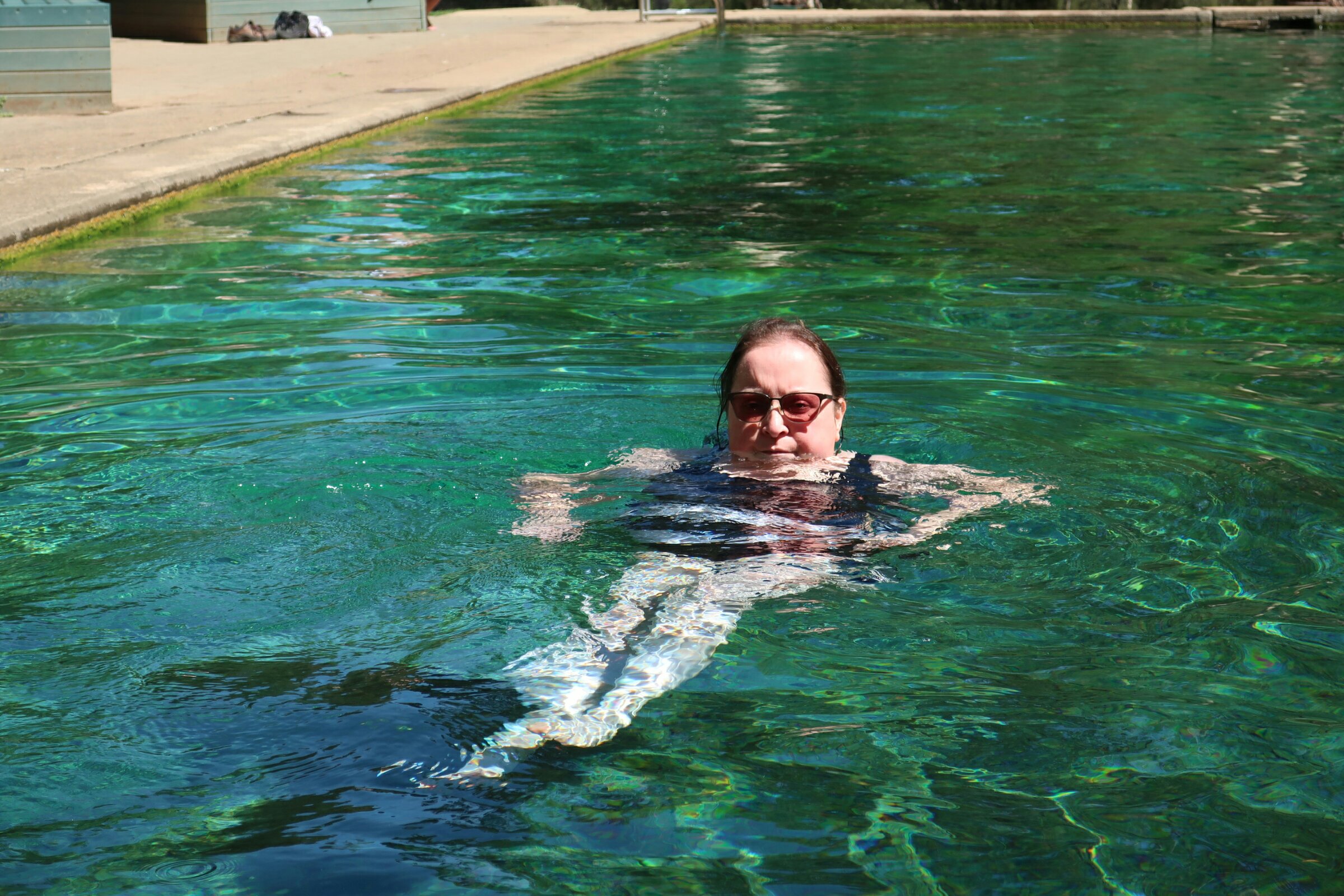 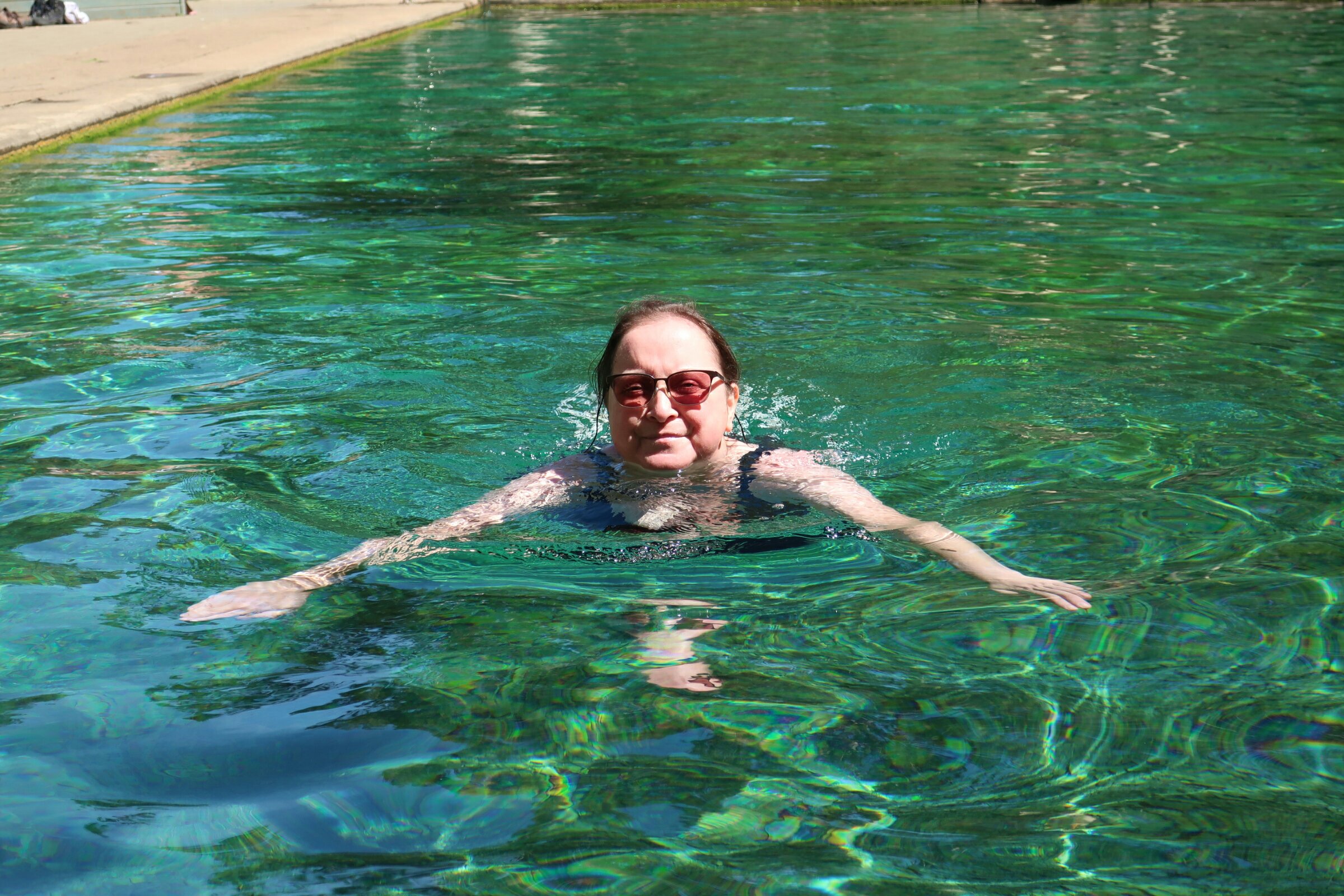 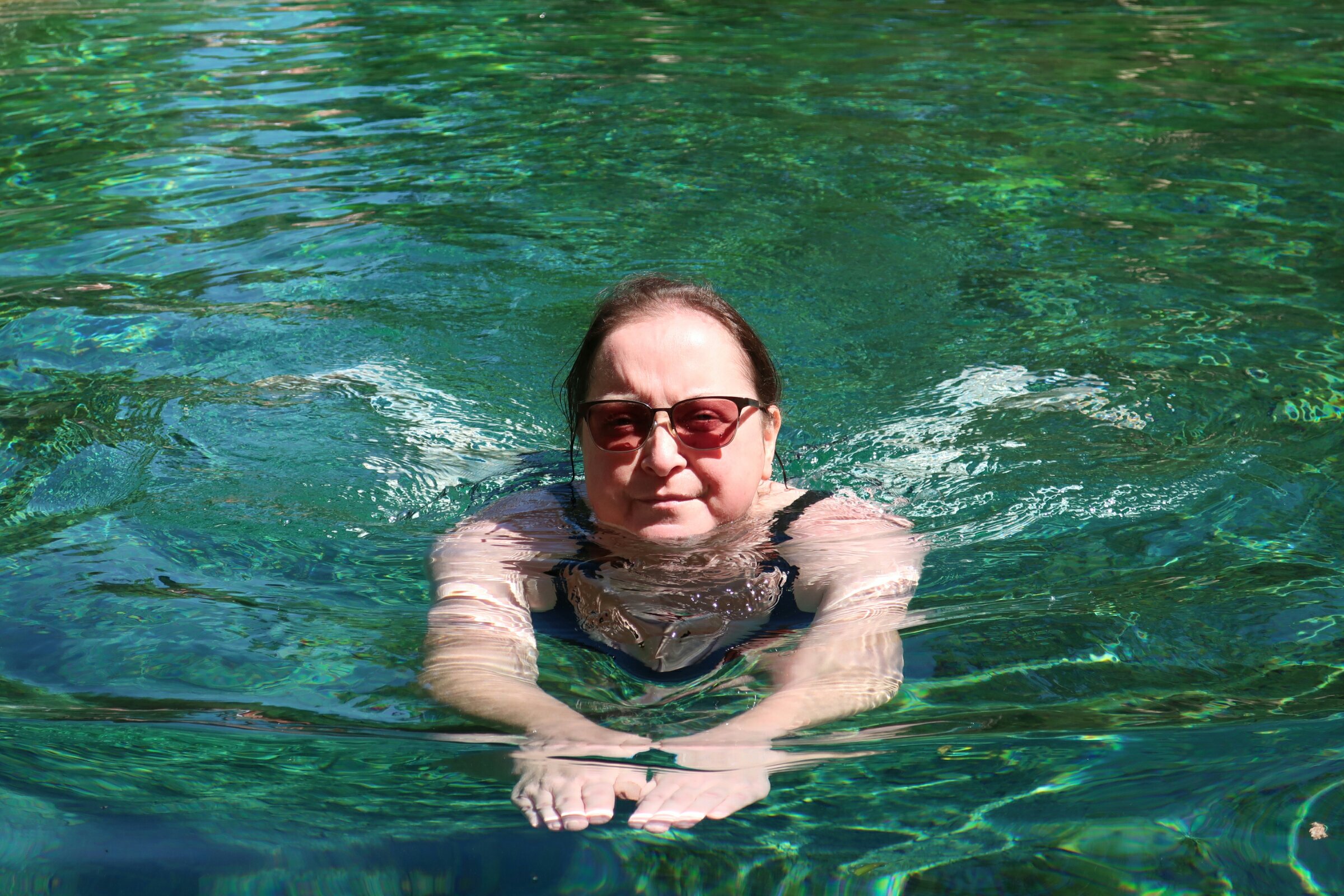 Yep, we forgot our sun hats and the sun cream. They were in the landcruiser who had now been named Serenity.

A little info on the thermal pool. Click on the image for a larger version

I love the bit about “Pobblebonks”! A sign of cleanliness.

Then it was time to head off. Our transport arrived promptly and we were soon looking for places to camp again. We headed off into the unknown to have a look around. May as well start at the very far end of the valley and work your way back.

Well we headed into native scrub and lots of ups and downs, quite grateful we were in a 4×4. The very far end camp-site (Blue Waterholes) was packed and not just with campers but with people just parking for the day. It was the set off point for a self guided cave system including scuba diving as well as beautiful walks in the wilderness, but sadly no longer for us (currently… Fingers crossed). Coming back one camp and again too busy. Full of people in cars that couldn’t manage the track to the other one of there was even a touch of rain…

We had noticed one the way through that there was a third camp-site, split in 2 by the road that not only had really nice grassy areas on which to camp (unlike the other two) but had been empty when we drove through. Sure enough it still was and we were to spot that it also had a water tank and tap in it as well. Typing up our water would mean we wouldn’t need to go via a supermarket the following day (just a petrol station). 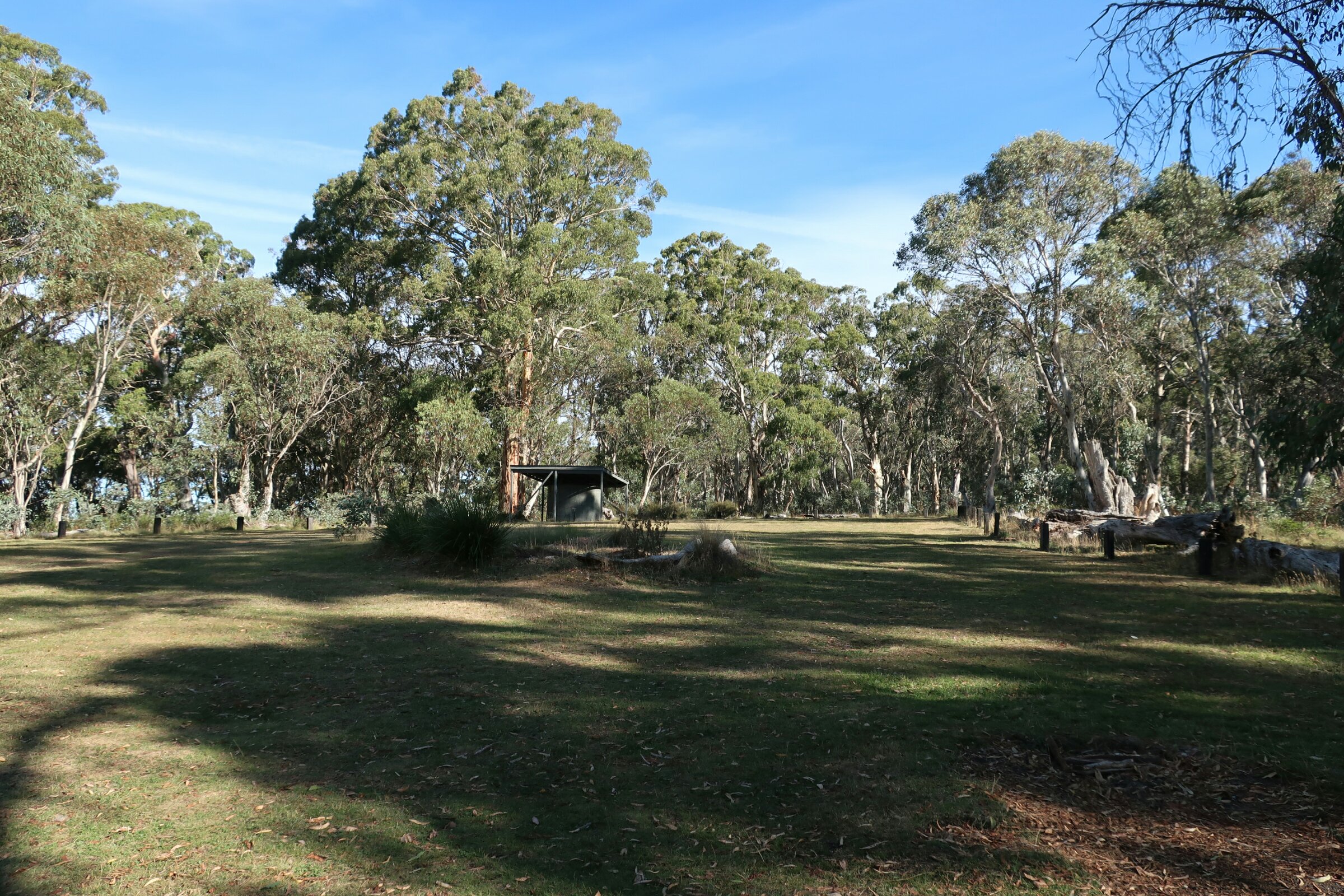 So Cooleman Mountain was to be our camp-site.

An introduction to our roof tent, it had an internal zip in the shade of a very large door so you can access the rear passenger door of Serenity.

The windows are 3 layers, the outer second skin which is over the top of the tent only and goes up as a sun shade to each window, a midge netting and an internal zipped curtain made of the same material add the rest of the tent. You can zip in part way up or roll it down completely depending on how cool/cold it is outside.

So that’s it except for a couple of trees and some more bark as it was getting towards dusk.