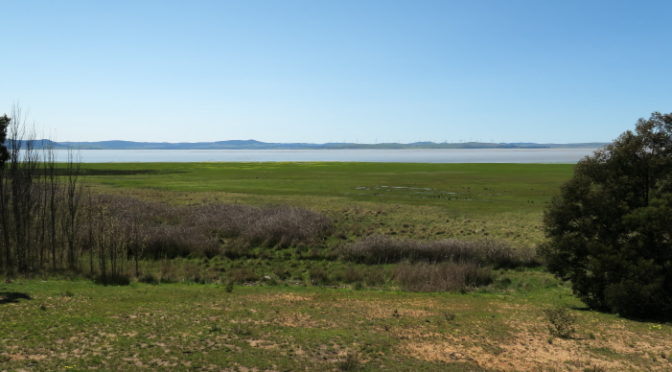 People were flocking to see it literally.  All of the rest stops at the side of the Canberra-Sydney highway were jam packed with cars and people getting out to photograph this lake with water in it!  I kid not.  Personally, neither Stuart or I could see what the fuss was about, but we are told that for many people who have lived here for generations, it is the first time they have seen water in Lake George.

So some pictures of a lake with water in it.

I give you, Lake George and water.

After that and a drive around the lake to explore a little: yes I found Stuart another dirt track to drive down which at least limited the vehicles we saw, we came home again and had the picnic lunch we had taken for a drive in the car.

At the moment, we feel we could easily be anywhere in Scandinavia rather than Australia.  The colours, the barn in the distance and even some of the trees (not obvious in this picture) being pines/spruce/fir and the Scandinavian/Irish colours make for a less than Australian feel.   Even the wind had a very good chill to it!  But this is the first time that Stuart and I have eaten lunch outside together and alone (we have had one other meal outside but with guests) and it was enjoyable.

Later on in the day, we carried on with the gardening because it was forecast to rain again the next day (a Bank Holiday) and some gardening needed doing after the children earlier in the week destroyed the place.  Sadly the bird table has died, but it made for some feeding opportunities for the chooks (it was riddled with ants and grubs) and made for an interesting ‘decoration’ until it was removed.

Then it was just a day of warm temperatures, the clock change over to Daylight Saving meant that 6pm became 7pm so at 7pm it was still 21C in the kitchen which is the first time we have seen the temp over 20C!  Yipeee.  Sadly it was not the same outside yet.  Though despite the skies remaining clear and the temperature falling fast outside, we didn’t have a fire by choice for the first time last night!

Any we were able to get to speak to Mum & Patrick, and separately, Jon and Sam.  Sadly we missed speaking to David yet again.  We will have to try harder next time he is available.  The 10 hour gap now whilst making life easier to calculate times, is making it harder to contact people and we may change to an early morning contact here, so that families can have an afternoon/early evening chat with us for them.  Saturday night at 8pm UK time (on GMT) will be Sunday 7am for us, after the end of this month which could be easier for some of the family.