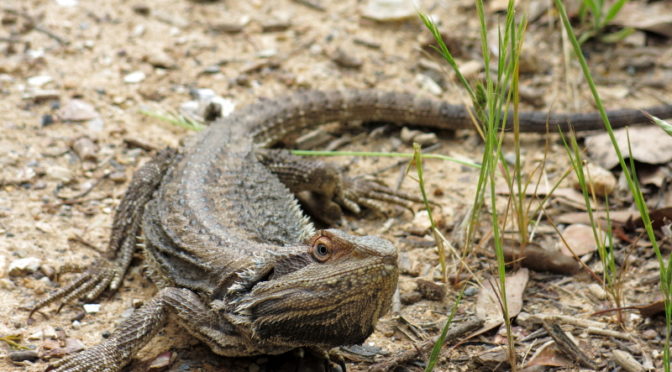 Yep, there be dragons here in Australia.  And more than one as well!

(I’ve been trying hard, really hard, to get Stuart to make a post here, but I have failed.  I have, however, managed to convince him to take photos when he is out and about and he now keeps one of the older cameras in the car with him.  This little camera is the one we took with us on the big tour is very capable of taking some excellent photos.  All I have to do is convince Stuart that getting out of the car to take some pictures is better than trying to take them in the car, through a window or worse still the rather dirty windscreen!)

And in doing so he has been collecting photos of dragons.  We do genuinely have a dragon, a skink and a lizard plus something unknown which is probably doomed to stay that way forever – zoom on a smartphone camera through a car window, from the drivers seat was never going to work sadly.

We started off with this specimen.  We know not what!

(Insert photo when you find it again!)

Next Stuart came across the Shingleback (Tiliqua rugosa) which is also a blue tongued lizard but not called one directly.  Taken on the smartphone, he did at least get out of the car for this one.  As you can see it was taken on our (dirt) road.

Then came the dragon.  Yes, we have dragons.  Stuart has seen them on the road many a time, but they have never been in a place safe to stop and take a photograph of them until this occasion when he came across it on our road, Spring Creek Road.

It also could be doomed to stay as an unknown, however, there is a chance that it is a Jacky Dragon (Amphibolurus muricatus).

On the track after picking up HP, we came across this specimen.  Also a dragon and much easier to identify.  An Eastern Bearded Dragon we believe.

Finally we get Stuart’s Blue Tongued Skink.  This one was actually on our track (leading to the house) and Stuart had to get out of the car and shoo it away to be able to get passed it!  That is how he found out it had a blue tongue!  It is, more specifically, a blotched blue tongued lizard (Tiliqua nigrolutea).  This is more obvious when you know the fact that whilst the blotched blue-tongued lizard is predominately a southern blue-tongued lizard (and that is actually one of its other names), in its most northern reaches of its range, the blotches on it tend to have a pink or orange colour to them which ours clearly does.

We have numerous small lizards, skinks, in the garden as well.  All of which remain unidentified and unphotographed because, put bluntly, they never stay still and also we never have the camera to hand when we encounter them.  Currently there are several living on the stones and rocks around all of the ponds.  There is another living under the wooden steps leading down to the chook house.  There is yet another one or two in the veg plot and I suspect there are numerous others in and around the garden that we have either yet to see or are staying out of our way.  I will work harder on getting some photos of them.