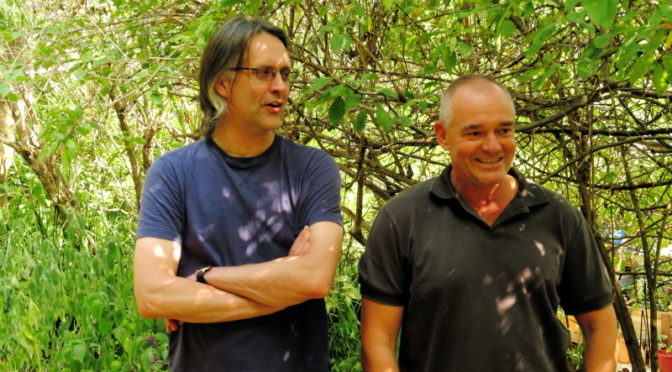 yep – well and truly over due.

The last update should have been that we had been to see some relatives of Stuart’s, so I will start there and also introduce you to a couple of new additions to our flock.  And hopefully get some of this done before the studio gets too hot to sit in and pray that the 35°C does not happen (which I don’t hold out much hope for personally, but one can hope!).

So, Stuart’s relatives.  We had been trying and trying to get to see them. Problems ranged from incorrect addresses to the point of them not having lived there for the last 15 years (oops) to playing table tennis voicemail… tag you are it (yet again)…. Eventually however, a date was set and it arrived.  Saturday 28th January…  yet another really hot day, again.  (Did I mention we are in a heatwave at the moment, words like “the weather isn’t normally like this” and routinely over 35°C and several days over 40°C.  The state has had the fire warning at Catastrophic in the north.  Luckily we have only been as high as Extreme (level 5 out of 6).

Anyhow, getting there proved more eventful than we had hoped for, but that was after our first stop.  With my back and knowing I had a long day ahead of us, we started with stops at regular intervals.  The first being a little of an hour away in Braidwood.  It’s not far from us, and tbh, it is probably not an hour away.  You would expect it to be quiet.  It is not.  It is, however a single street with a supermarket and a couple of extra shops along the side road that makes the crossroads where the main road actually turns off left to the coast.  It’s the major highway, but you would really not know it.

We parked up and went into what counts for a service station café in these parts.  There are a couple of other cafes but this one is definitely aimed at the truckers and families coming through and we wanted a fast drink and service, not a leisurely one (or expensive for that matter).  It’s a ‘at the counter’ job and once it was our turn we asked the usual question… this covers me for eating our own food in establishments when they reply that they don’t do anything dairy free.  I was to get a very big surprise.  All of their gluten free stuff (a list was produced of over 10 items or more) and another 10 or so items as well were dairy free!  I actually had a choice and not just of a couple of things like apple strudel and apple turnover (OK I think the turnover wasn’t dairy free but the strudel was) and they had soya milk as well… I could have a drink and a cake to go with it!  And a choice… Stuart had to order first whilst I choose!  It is so unusual that I wasn’t prepared… As we left, I spotted the manager and thanked them.  I don’t think they were expecting someone to be surprised that there was a choice, but trust me, I never have a choice unless it is a vegan café and even in vegetarian cafes I have been left without anything other than a coffee.

After that surprise we were to set out into the unknown, literally.  We play this game about being lost.  It’s really hard to actually be lost.  For one, there are not that many roads to choose from in the first place.  In fact there are really only 2 ways of getting to where we were going and one of those was roughly 50km longer than the ‘obvious’ route!  Then there are the onbvious things like the sign posts… they are rather obvious and there are also kilometre counters with the direction you are going in, so if we are going to Braidwood, then every km you get a little signpost at the side of the road saying B27.  Braidwood is 27km away.  Really difficult.  In the other direction you will get the next town’s initial and a number.  And of course the car has satnav and whilst it is out of date and some roads are missing or in a different place now, routes such as this are just fine!  The car is 5 years old.  The map is roughly that as well.  You can’t buy an update because it runs from a DVD behind the display.  You have to purchase a new copy and that is over AUD $350 and for the time being, we have decided we can spend the money in a better manner!

So from Braidwood it was all new territory and you saw nothing.  Yep, if we had been cycling it I might have managed to show you photos of pine trees and possibly even managed to abandon the bike at the side of the road and show you an impressive view obscured by pine trees, or perhaps even some of the palms and ferns growing in the forest to the side of the road, but it is mountainous as well and would have been a very hard route to cycle.  It is also a dangerous road as it turns out and we were to be held up for a while because of an accident.  This gave Stuart chance to get a drink.  The day was warming up and the road not one to take a chance on even to have a drink.  It’s roads like this one that make you glad for satnav and a map telling you that you are coming up on a 180 switchback or a very tight acute 30 degree bend… I’m not saying they are not signposted, they are and very well, but some of these bends, when you are driving it for the first time, well extra warning helps.

So we found the place without too many issues and I for one immediately knew we were in the right place when I saw Stuart’s cousin, Peter. 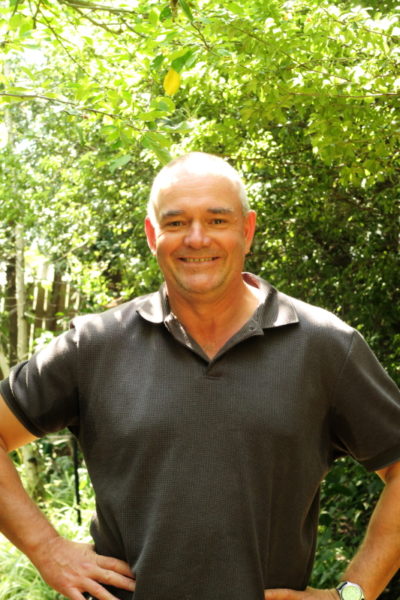 Now Stuart does not think Peter looks exceptionally like Jon.  And if I could find a photo of Jon, I would post it, but, trust me.  If you want to know what Jon looks like….  well you are not far off.

OK – I have found a video message Jon left us sometime ago on Skype and taken a screenshot for you.  I can see the similarity immediately and there were plenty of other little things during the day, mannerisms and the like that were the same. 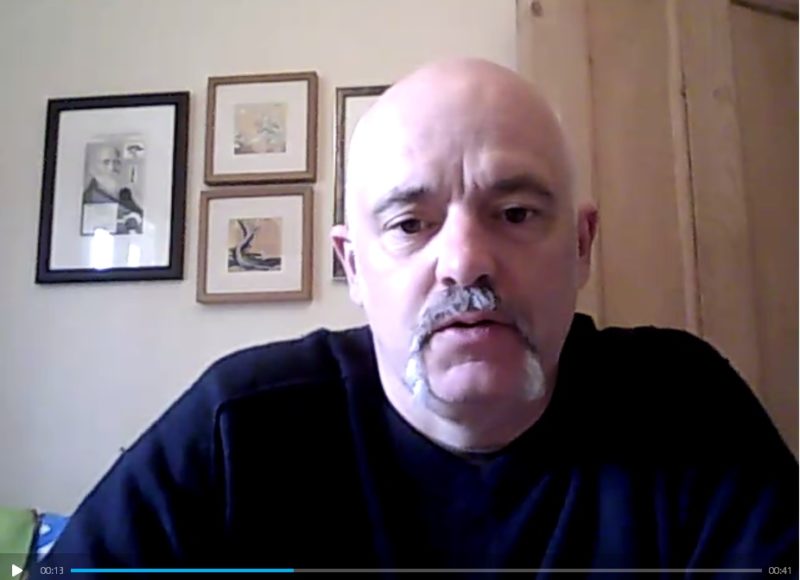 No, well I thought there was.

Anyhow, we chatted and talked, snacked and the likes.  Had lunch and did the usual tours and the likes for relatives that haven’t seen each other in a decade I think it was and even then it was only a brief meeting in the street!

All too quickly it was time to go, so cameras came out and we all went outside for photos.  It was hot and sunny out and the shade made life interesting, sometimes too much, and often the sun hitting just the wrong spot!  But that is also one of the family resemblances! 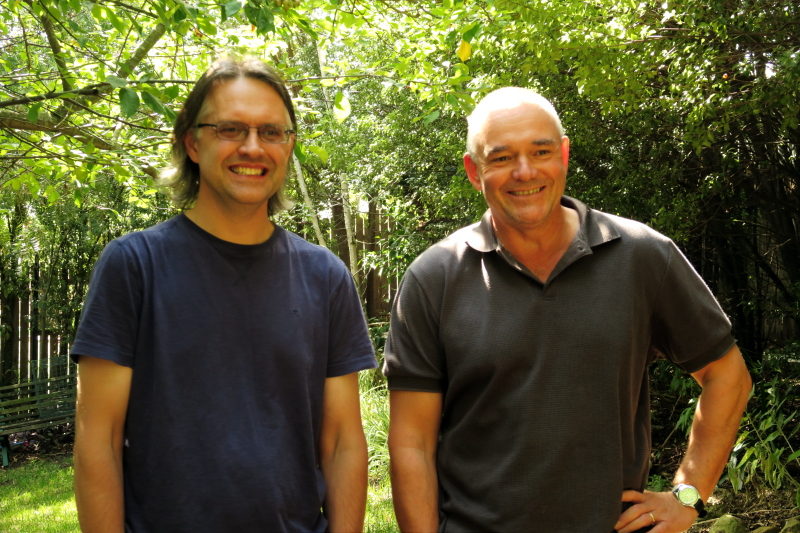 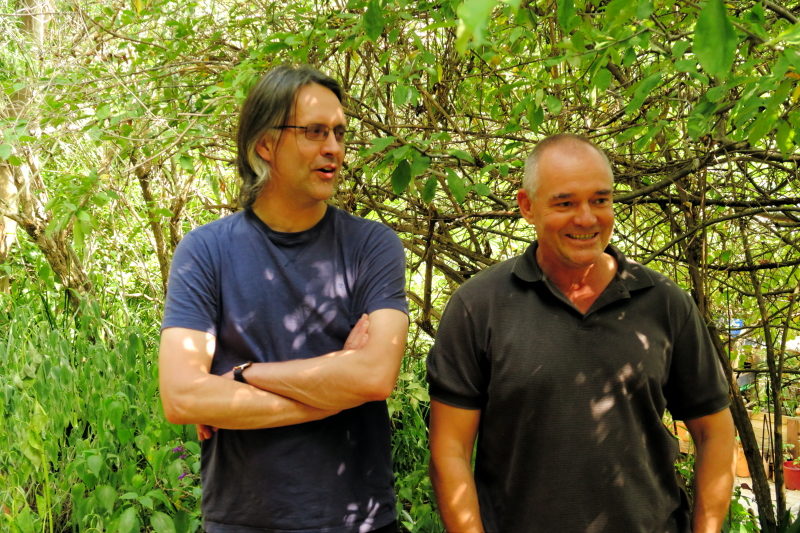 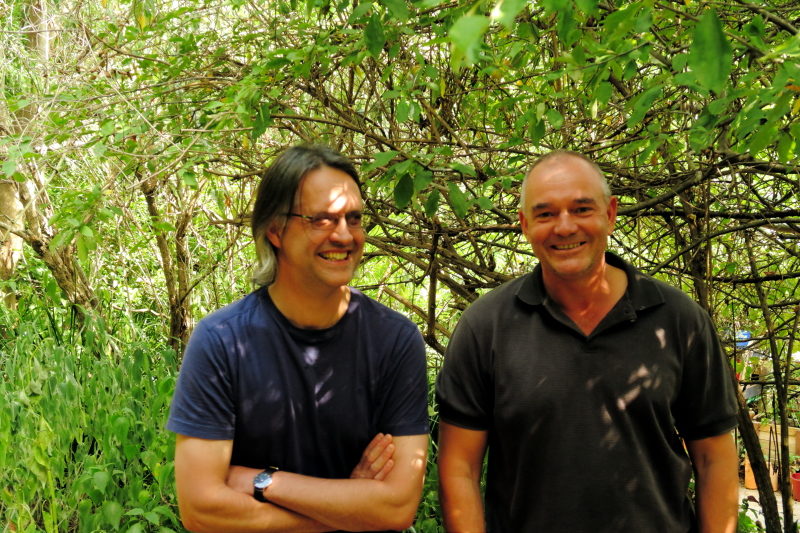 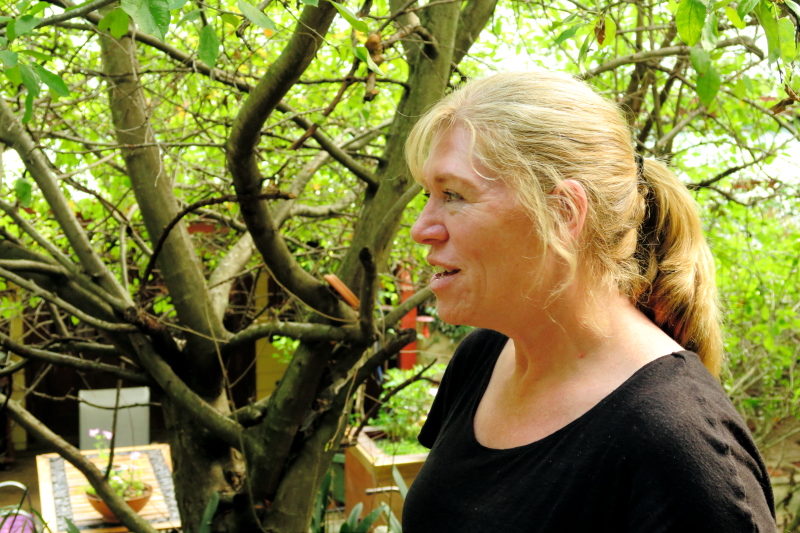 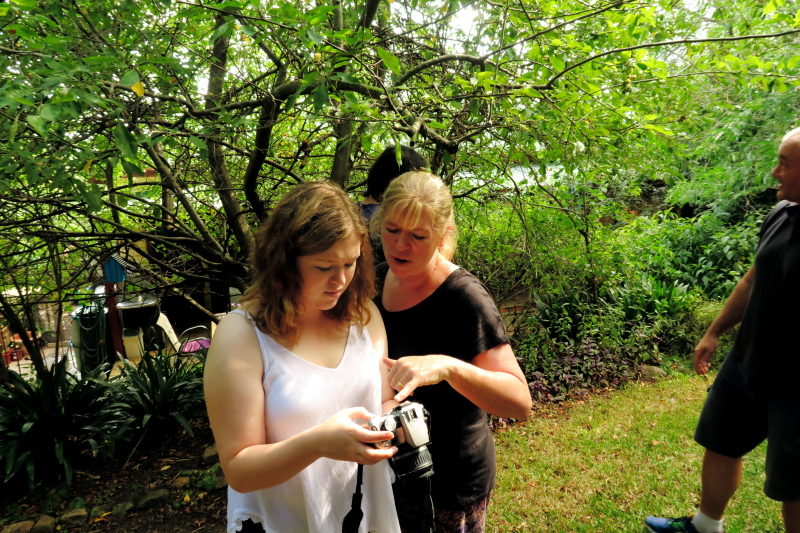 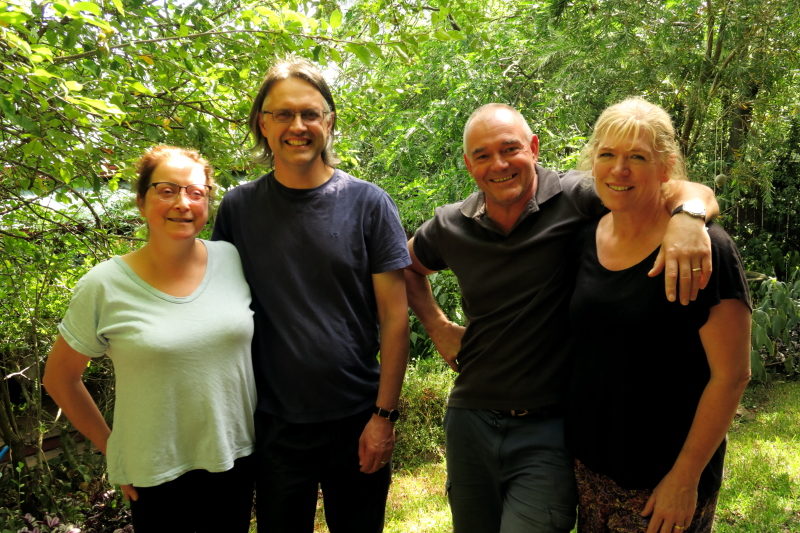 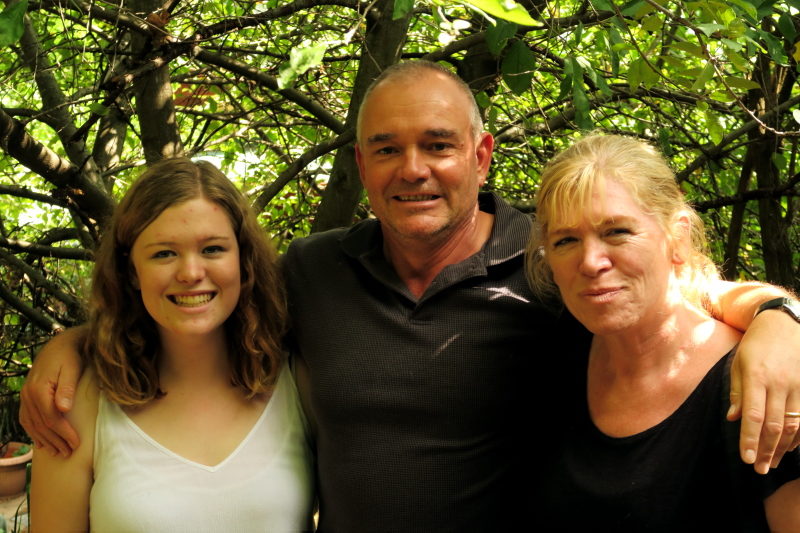 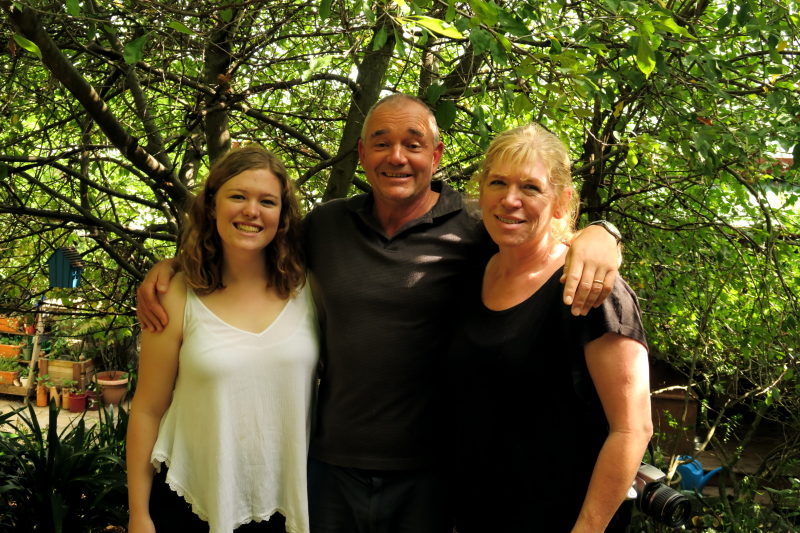 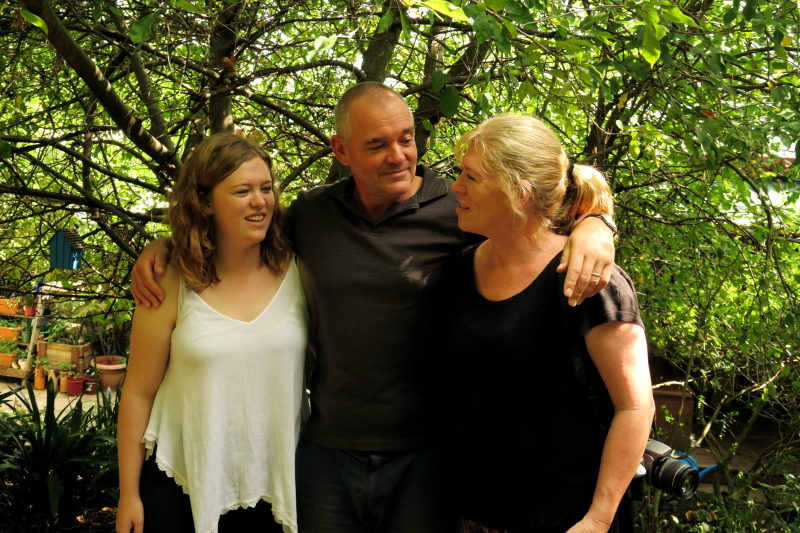 After a look around the garden and at their ducks one of whom is permanently sitting on eggs, it was time to leave because we had a slightly longer journey home that coming because we had to collect a couple of new chooks for our flock.  Our rooster needs his enthusiasm for life spreading a touch thinner than the existing 5 hens (it should be 6 but mother chook is still looking after her chicks).  But I will leave their introduction for my next update.  It is now 12:30pm and the Studio is getting too hot to remain in sadly and I need to get some lunch and then rest.  I have to collect Stuart from the airport later tonight, and it will be a very late journey home!