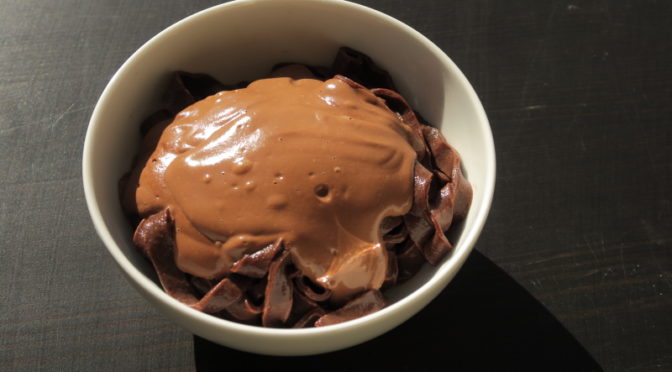 I had planned to update the blog last week, but on the Friday before a certain husband of mine reminded both of us that he had a week’s leave booked for last week and where were we visiting?  Now I do remember him booking it, but he never really confirmed what days and dates it was that he had taken off.  So everything that was planned for last week (in the planning department of this home) got postponed for a week and new activities had to be found…

And we have a new rescue chook as well.  She came to us as the sole survivor of her flock after someone else neglected their flock in some of the coldest weather this area gets, not providing them with food or water for over a week!  The pour thing was skin and bones literally and how she survived was a mystery.  And to top it off if it was possible to have it, she did.  She has fleas and lice that took 2 separate treatments to cure her of (not to mention me itching for a week or so), a upper respiratory infection that left her hardly able to breathe let alone sleep properly (because of the breathing issues), legs and scaley leg mites that are still being treated and are amongst the worst a friend of mine has seen, worms, dehydration and malnutrition…  so we have another living in the house with us because it has been way too cold to put her out, plus with all those issues, she has needed special care to recover.  Right now she lives outside during the day and inside at night so we can treat her legs twice a day.  She’s been with us 10 days now and has recovered so well.  I just need her to stop pecking at her legs – I may have to bandage them up to stop her doing so.

Anyhow, where were we?  Ahhh the period of colder weather that arrived with 4 nights of -8°C (that is -8°C in the morning, not necessarily the lowest it went!) and frozen water pipes yet again.  Actually this time around we lost all water, in both the bore water system and the tank water system.  Hardly surprisingly really but we had been hopeful or was it too optimistic? And then came the leaks… actually I had already found one of them and reported it on our house inspection which had been taking up a lot of my time, only the new girl didn’t do her job and then upped and left without telling anyone anything… so having found out all of this from our builder who supplies our wood as well (he’s from Somerset originally), we tried again.  Then the morning before the first -8°C overnight forecast, I found another 2 leaks on the system.  Our builder was sent out immediately this time, working the Saturday morning to get the leaks sorted so as not to cause problems (if anyone of them failed, they would empty the bore tank of water leaving us with no sanitation because the water table is too low right now to refill the system!)  Many people lost water in Bungendore completely whilst quite a few had it where they didn’t want it!  There were lots of complaints on the local Facebook group that kept us quite amused and all plumbers rather busy!

So, in the life of here – the weather has been everything except wet enough to water anything or top of the water table.   Freezing has been the common theme and it is so long now since the fire last went out that neither of us can remember exactly when it was!  The main common theme has been fantastically beautiful, frosty mornings with everything covered in hoar frost, freezing cold fingers and toes and breaking the ice off water for the chooks.  The main exception to that has been the week Stuart choose to take off work!  Typical, though it wasn’t as bad as the forecast had suggested it would be.

So between then and the last update what has happened?  I have been cooking a number of new things.  One of the challenges on the cooking forum I run was to cook ravioli from scratch.  I think the biggest challenge there turned out to be locating “00” flour.  Once I had that, I just followed the instructions and made homemade ravioli.  I opted for a caramelised onion, balsamic vinegar and honey glaze with thyme filling.

And then a form of madness took over.  There was another challenge running on the cooking forum and that was a recipe to include chocolate somehow…. and so the idea came into being.  I did briefly consider chocolate ravioli stuffed with… but then came to my senses and settled for chocolate tagliatelle with a creamy dark chocolate cashew nut based sauce.  Imagine my surprise when I established that there were 2 versions of chocolate pasta… a bitter chocolate version and a sweet chocolate version.  I settled for making both 😀

And after trying both versions for lunch, we settled on preferring the sweet version.  It was only marginally sweet but it seemed to make the difference despite the sauce being identical and the recipes being almost exactly the same.

Following on with the food theme, we have been out a couple of times this week for meals at cafes and also to the Canberra Curry Festival, plus I have made a round or two of pikelets!

Stuart’s bean burger at one of our ‘pit stops’.

My lunch that day was a delicious curried chickpea pie with a rainbow salad and my cashew nut milk hot chocolate.

Finally another trip out saw us at a café some distance away from here, where we were able to have the pumpkin soup with a slice of raw bread and there were some vegan cheesecake pictures as well, but I can’t put my hands on them right now!

And the weekend saw us visit the Canberra Curry Festival.  This is the second time we have been and last year we came to the same conclusion as this year.  Our favourite stall was the vegan Ethiopian food stall! 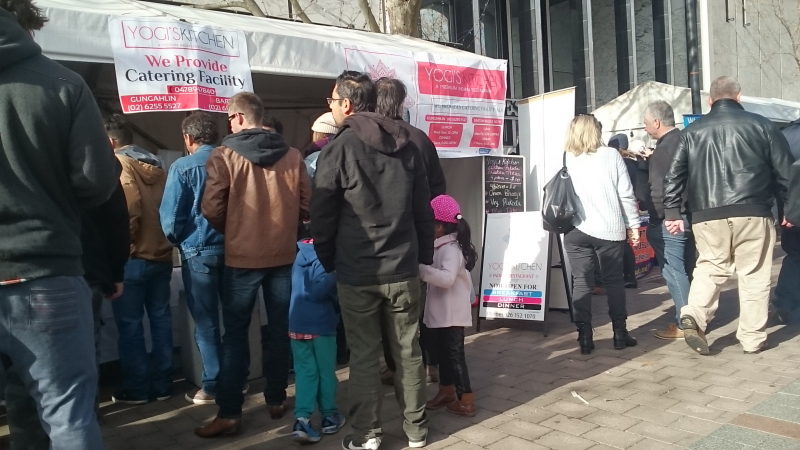 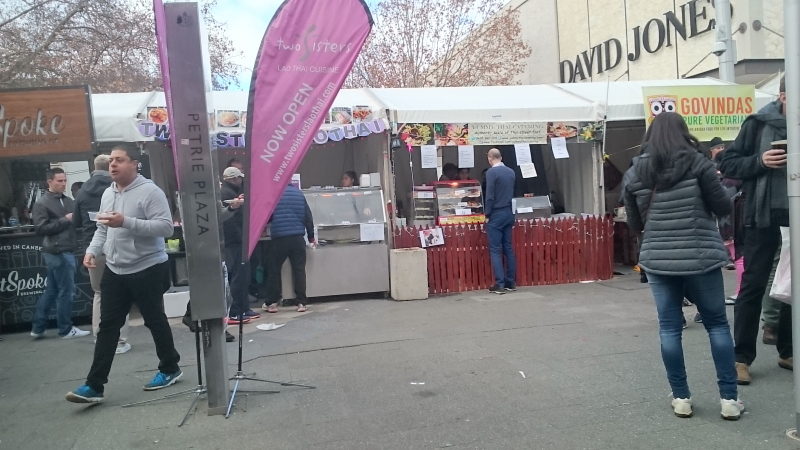 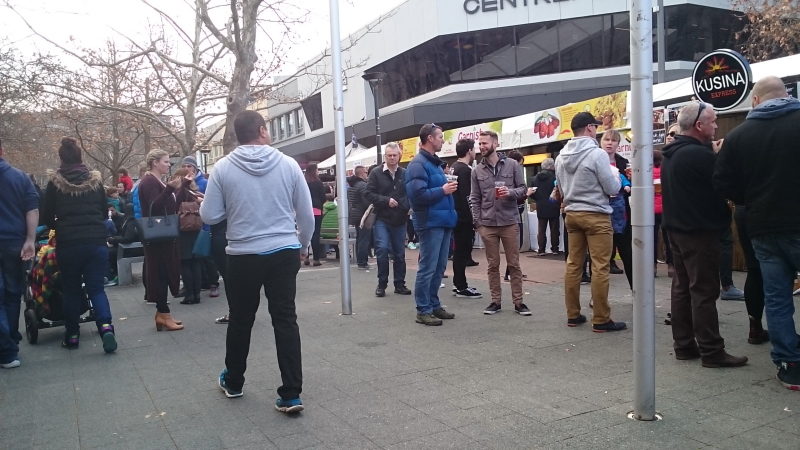 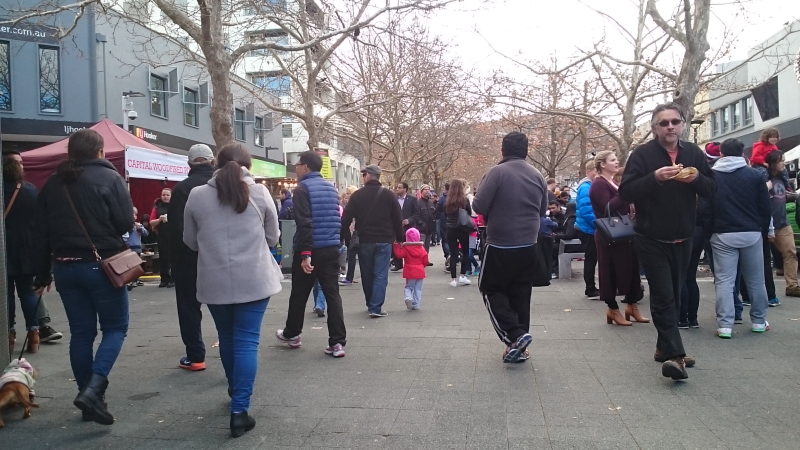 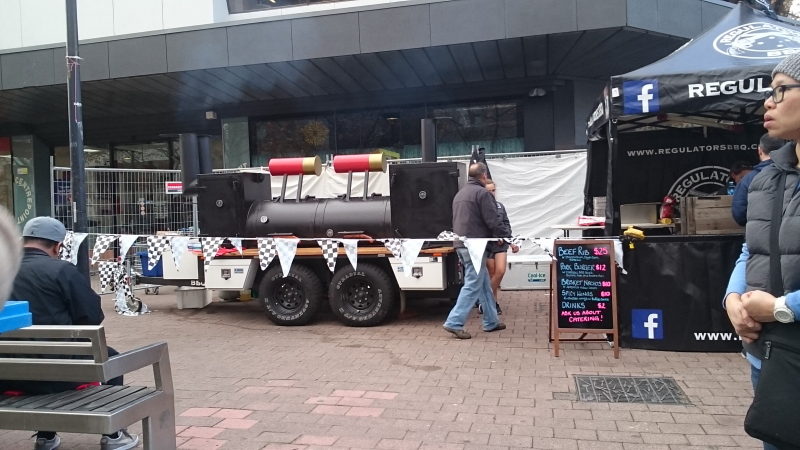 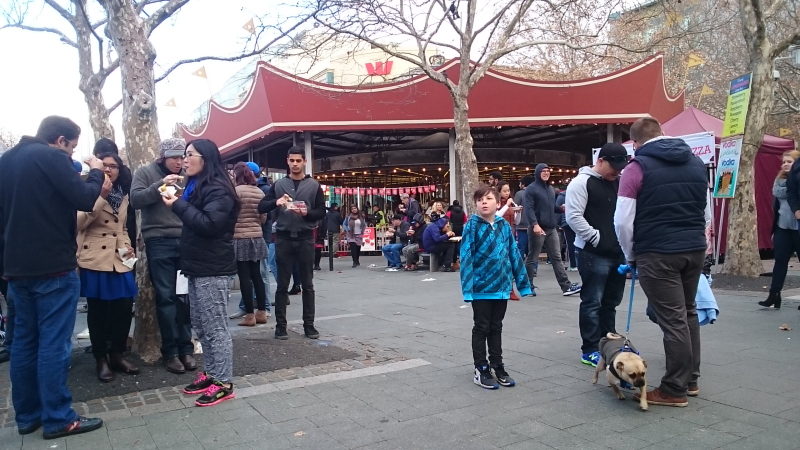