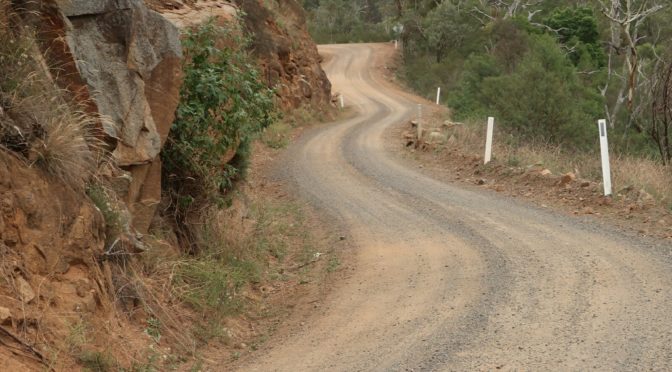 The overnight rain didn’t happen and we breathed a sigh of relief. We could do that track without needing to worry about faffing around with tyre pressures of rivers of mud. But first we wanted a quick explore once the 4×4 club left. 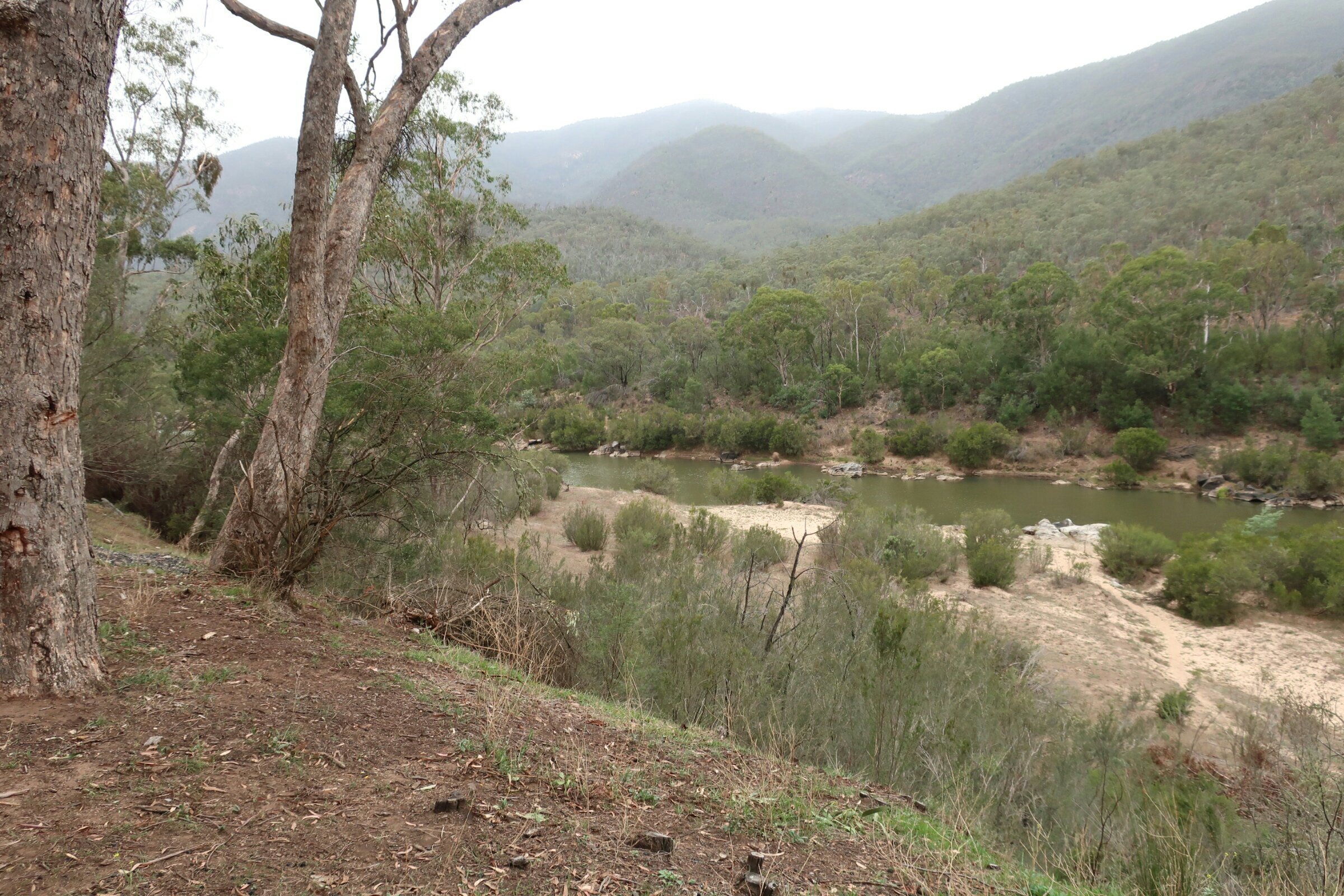 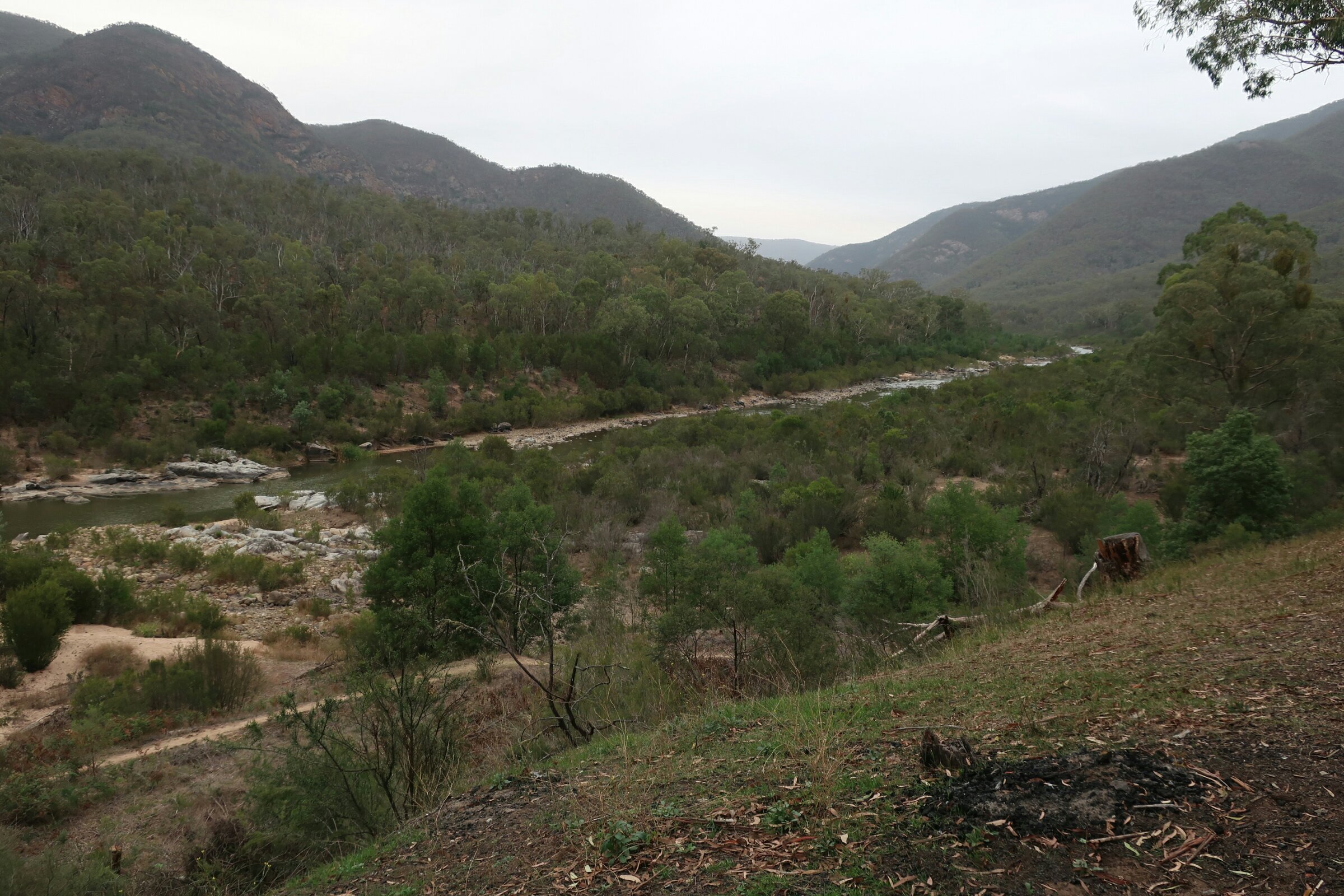 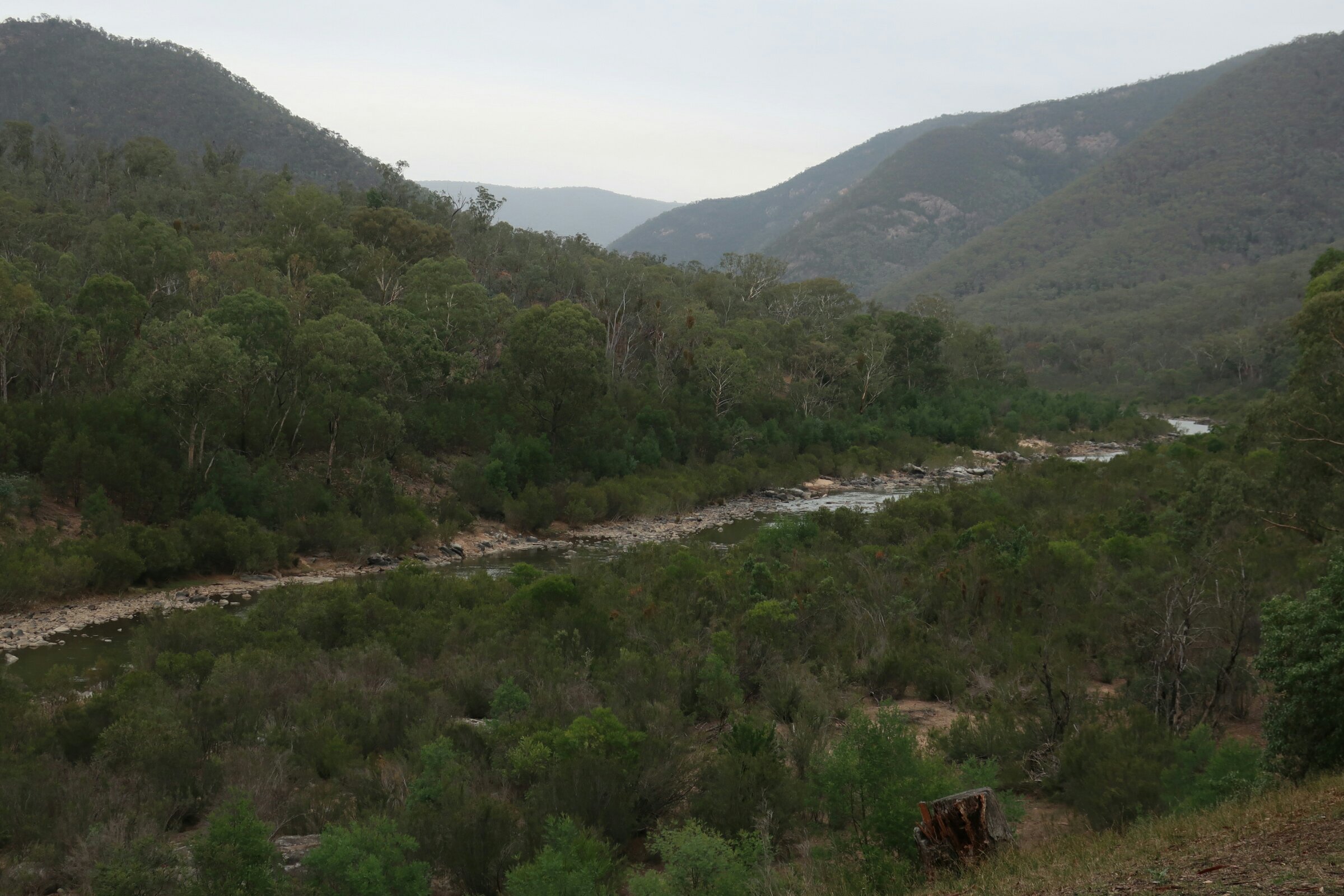 Presumably the little river is somewhere else, off to the right out of immediate sight, but this was the view for a lucky few campers!

Then it was time to leave. Stuart wanted to record me driving up the ridge back to the road and it was a long climb to get back up to it. Serenity, however, took it in her stride not missing a beat. Needless to say, it is a lot steeper than the photos or videos show. 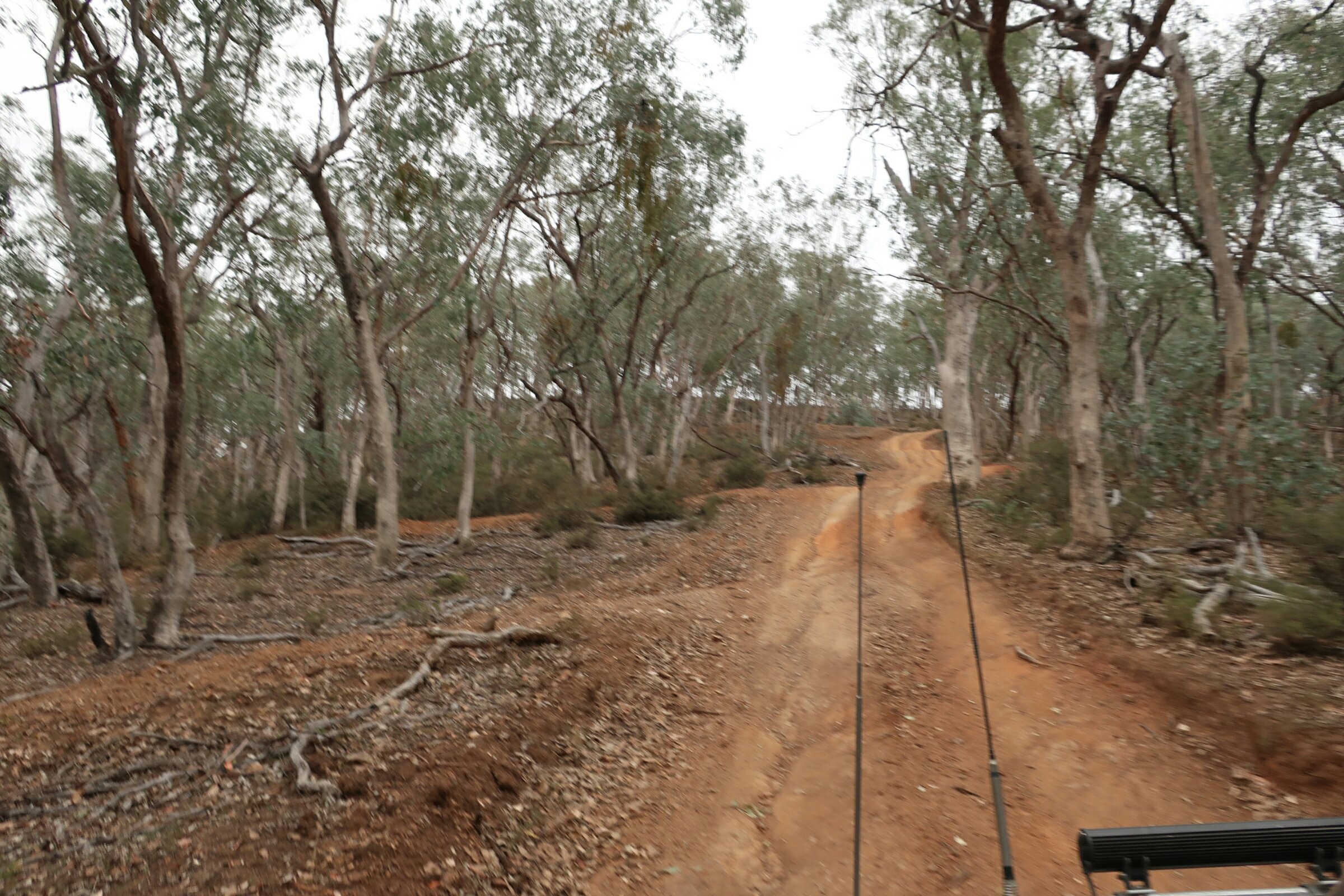 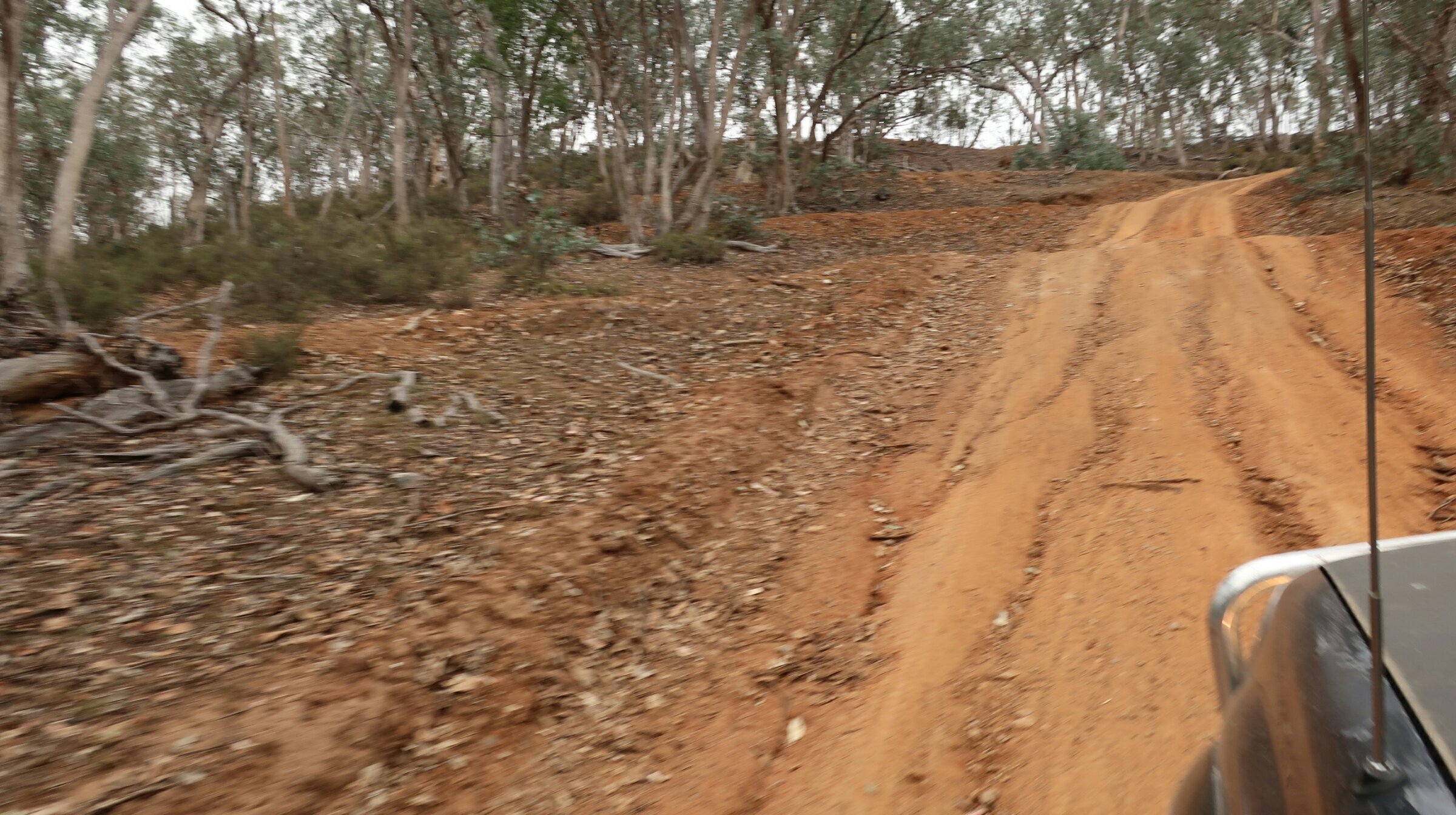 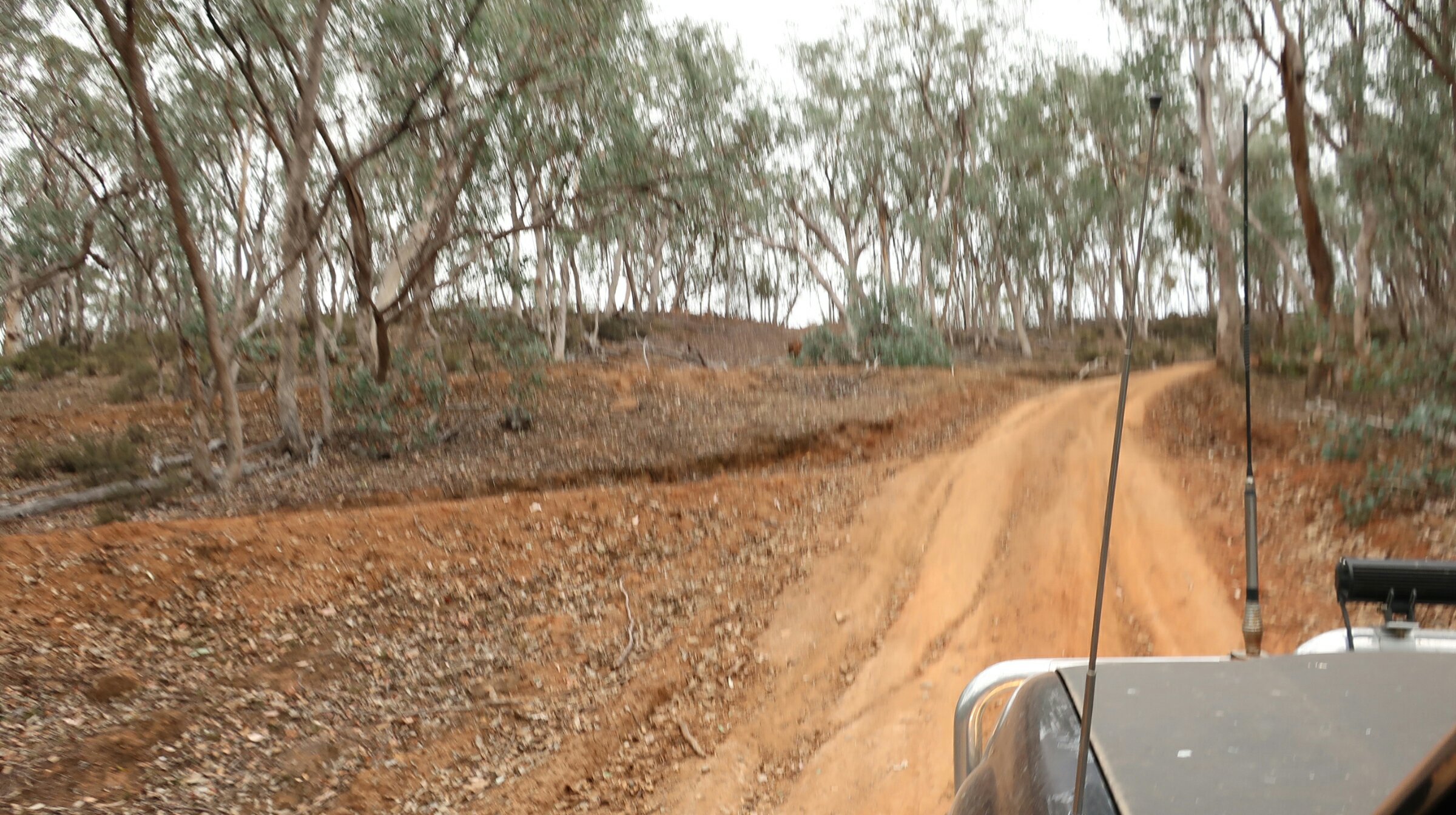 The ridges are there to divert water flow so that the track doesn’t get washed away too often. They alone are often the biggest hurdle to be taken just because of the clearance needed but we can do them in our other vehicle (the AWD SUV). This track however is best left to 4x4s. That we can confirm.

Stuart made some videos of me driving the track. Serenity has an interesting range of gears and there’s a huge difference between second and third and third and fourth. First can be bypassed very easily even in high ratio, the same is especially true in low ratio. It was to become a case of switching between 2nd and 3rd frequently or more often sitting and waiting it out in 2nd gear. There really needed to be a 2.5 gear as you will hear from the soundtrack.

Once back at the road, it was more of the same, just no passing places and a thousand for drop on the driver’s side… 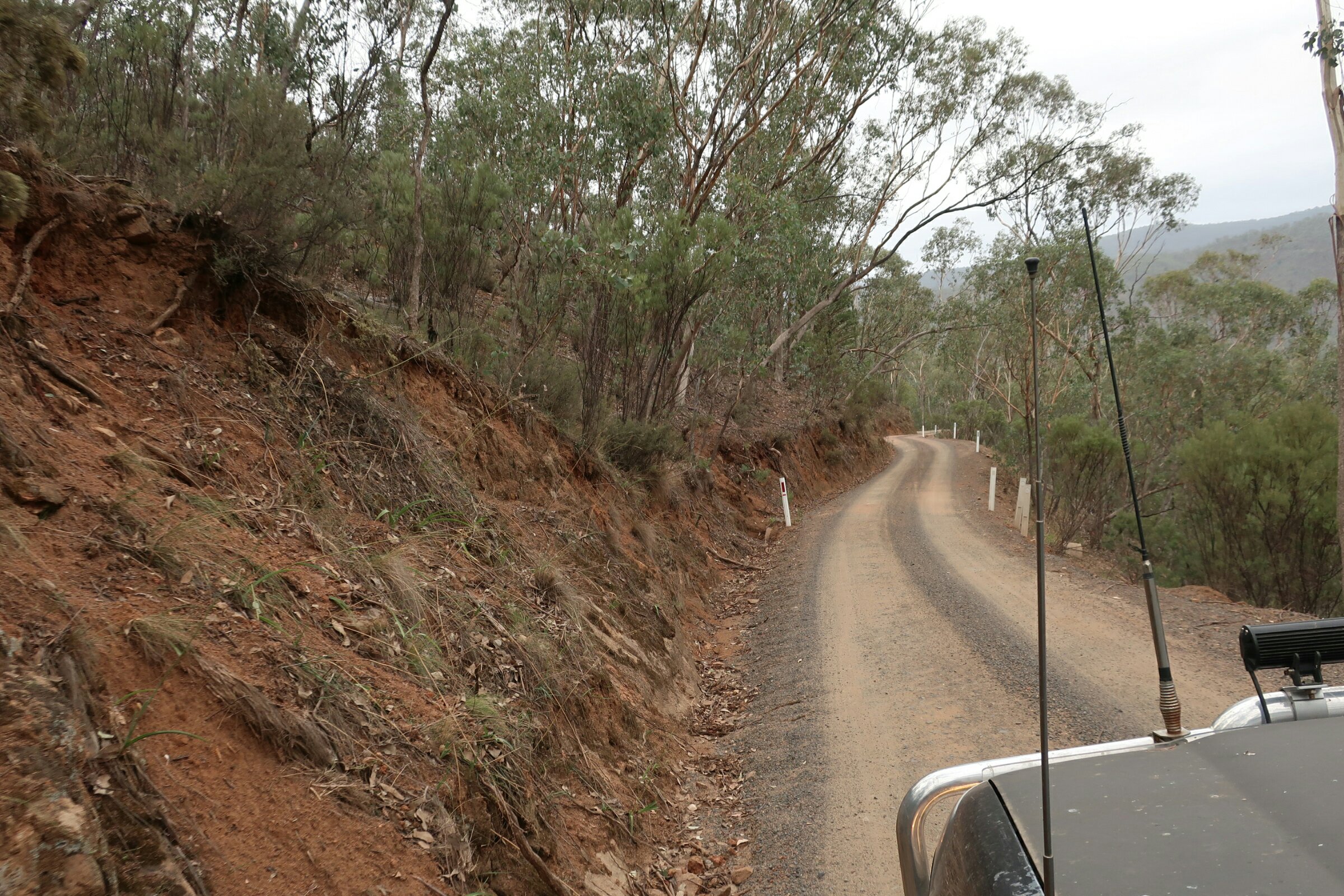 Right up until a bridge. One that reminded us of a similar one we had met in Hungary only that one was floated across the river on pontoon bridges and went up and down with the height of the river. 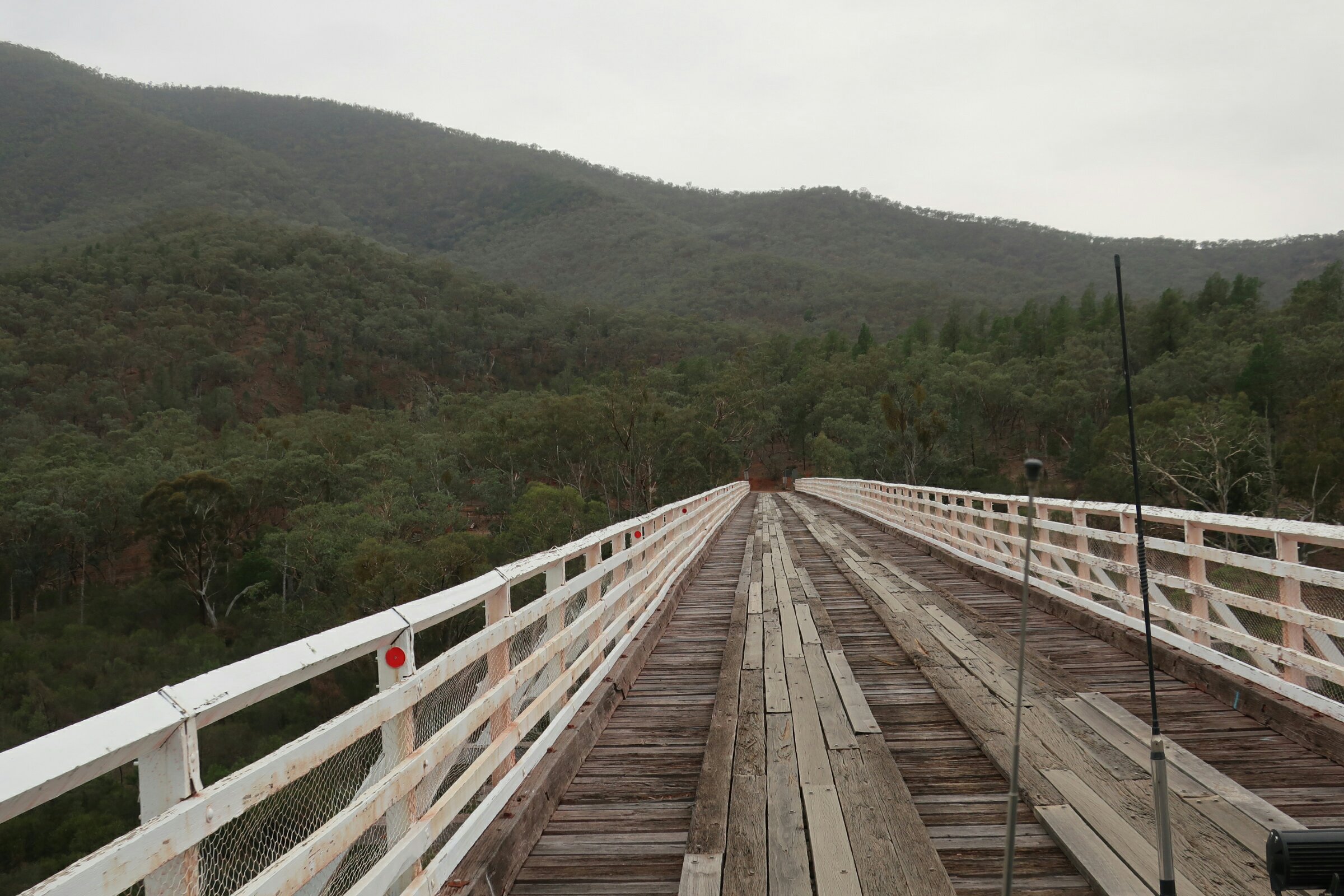 Ok, it’s in better condition, but it’s also a lot higher. This is McKillops Bridge. I think it is across the Snowy River, yep, just confirmed that it is. Perhaps on a clear winter’s day it may look a touch better or a touch more impressive. All we saw was a bridge that would have been hell to cycle and as for crossing it in the peak season, well that would have been hell as well. There’s a large free camp-site off on the right immediately after the bridge going down to the water level where kids and adults alike bathe in warmer months. 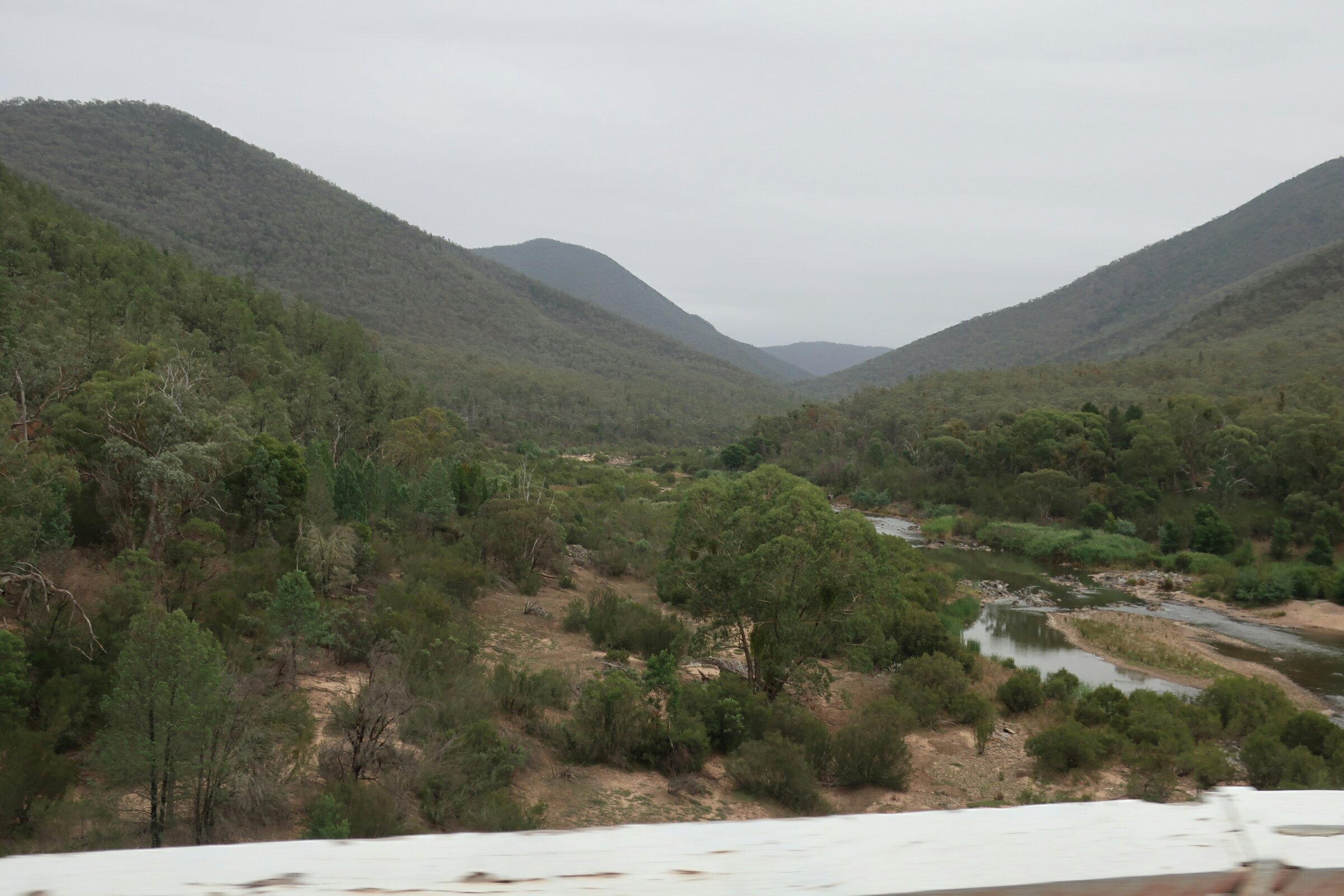 Above is the view to the left 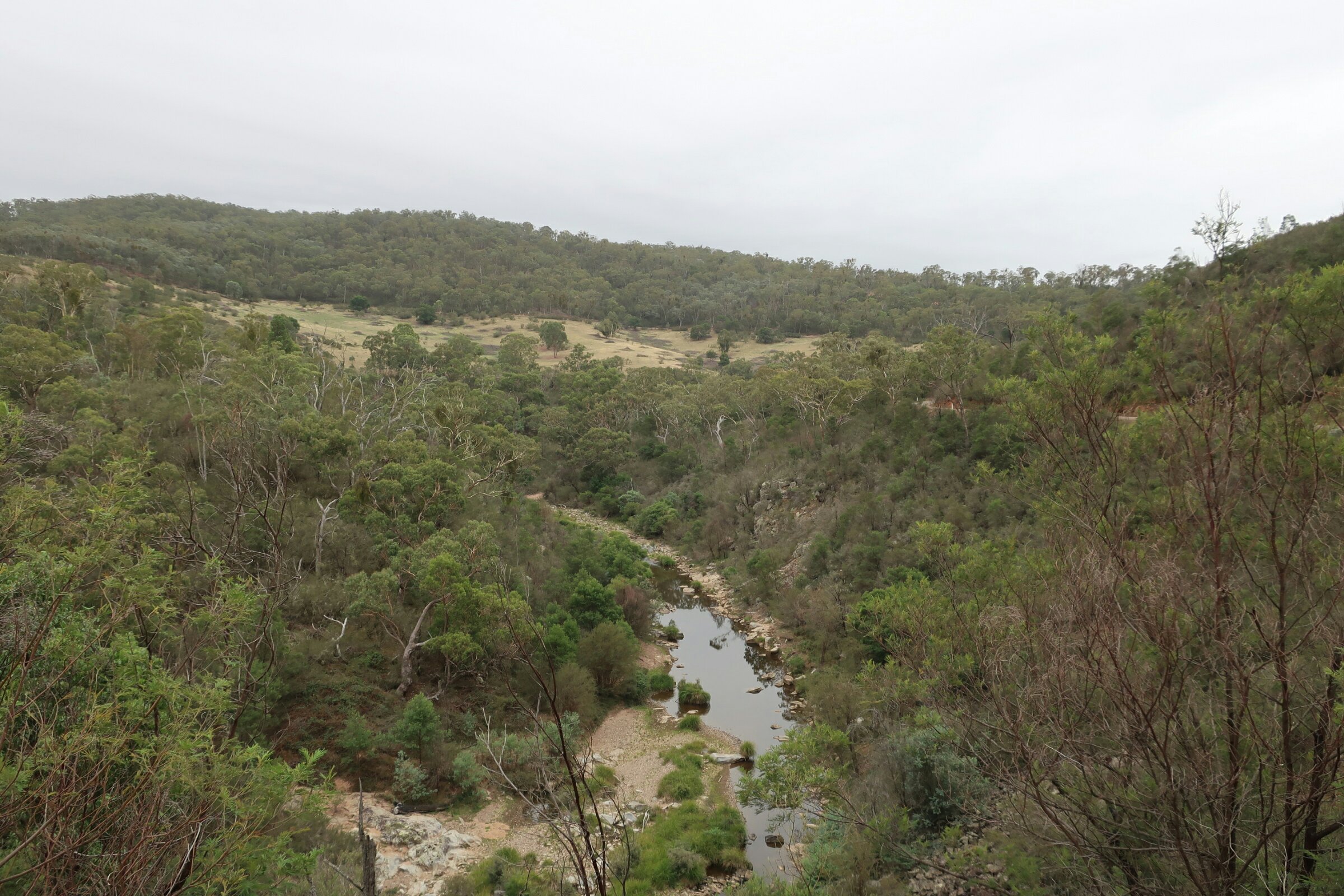 and to the right…

A little bit about McKillops Bridge…

“The road spans the Snowy River and was built by the Country Roads Board between 1931-36. It’s the only bridge over the Snowy River for a very long way. The deck is 255 metres long and stands high above the river. Downstream are the remains of the original McKillop Bridge washed away in 1934, a day before it was due to be opened.“

“The road over the bridge is called McKillops Road (officially C611). It’s said to be the most hazardous & dangerous road to drive on in the country. The bridge consists of welded-steel trusses seated on tall one-piece reinforced-concrete piers, supporting an elaborate timber stockbridge superstructure. It’s the perfect spot to take a break, whether to simply enjoy the picturesque views from the bridge along the Snowy River gorge or something a little more active.“

“Located in the Snowy River National Park, in Victoria, Australia, the iconic McKillops Bridge is a significant engineering feat at the time. The road spans the Snowy River and was built by the Country Roads Board between 1931-36. The deck is 255 metres long and stands high above the river. The road over the bridge is called McKillops Road (officially C611). It’s said to be the most hazardous & dangerous road to drive on in the country. The bridge consists of welded-steel trusses seated on tall one-piece reinforced-concrete piers, supporting an elaborate timber stockbridge superstructure“

So you get the idea. To be honest, we are just glad not to have met anyone and only lingered long enough to take a couple of photos from the bridge and to take it at a sensible pace.

Then more and more of the same until we got to a village called Deddick. Spotting a sign for toilets, coffee and a chat, we stopped. Stuart was looking like he needed two of the three minimum and there was little point in using our hot water in the flasks when we could use some from a kettle. What we had found was a community centre aimed at both the community and tourists alike providing free coffee and a chat. And it was an enjoyable chat at that. About an hour later we stayed ourselves from the armchairs and returned to the road after listening to tails about locals who would only drive the road in one direction (on the cliff face side not the edge side) or would only drive it at night (more warning about oncoming vehicles). We’ve ridden and driven worse roads but said nothing. 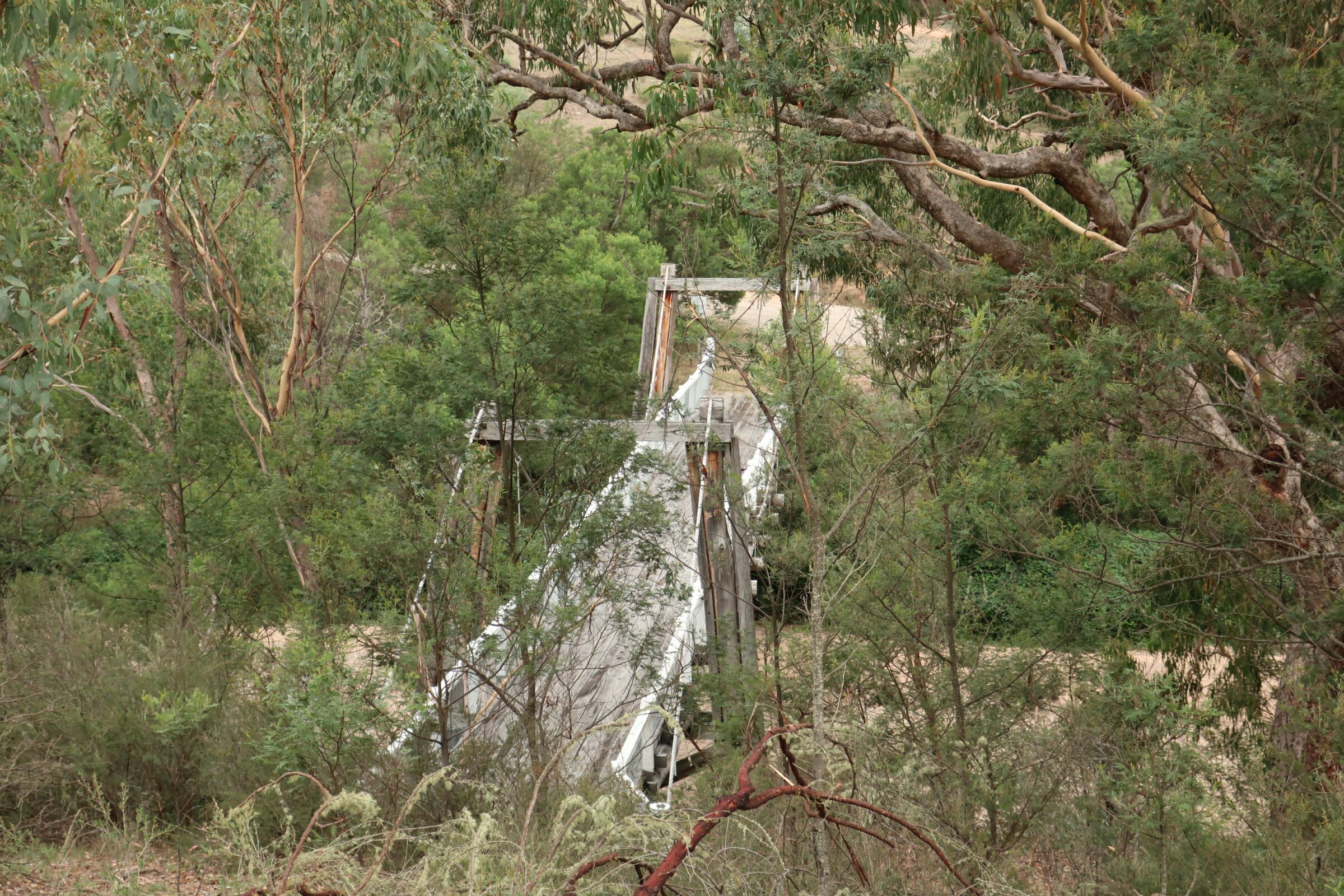 A little later on and we spotted this… 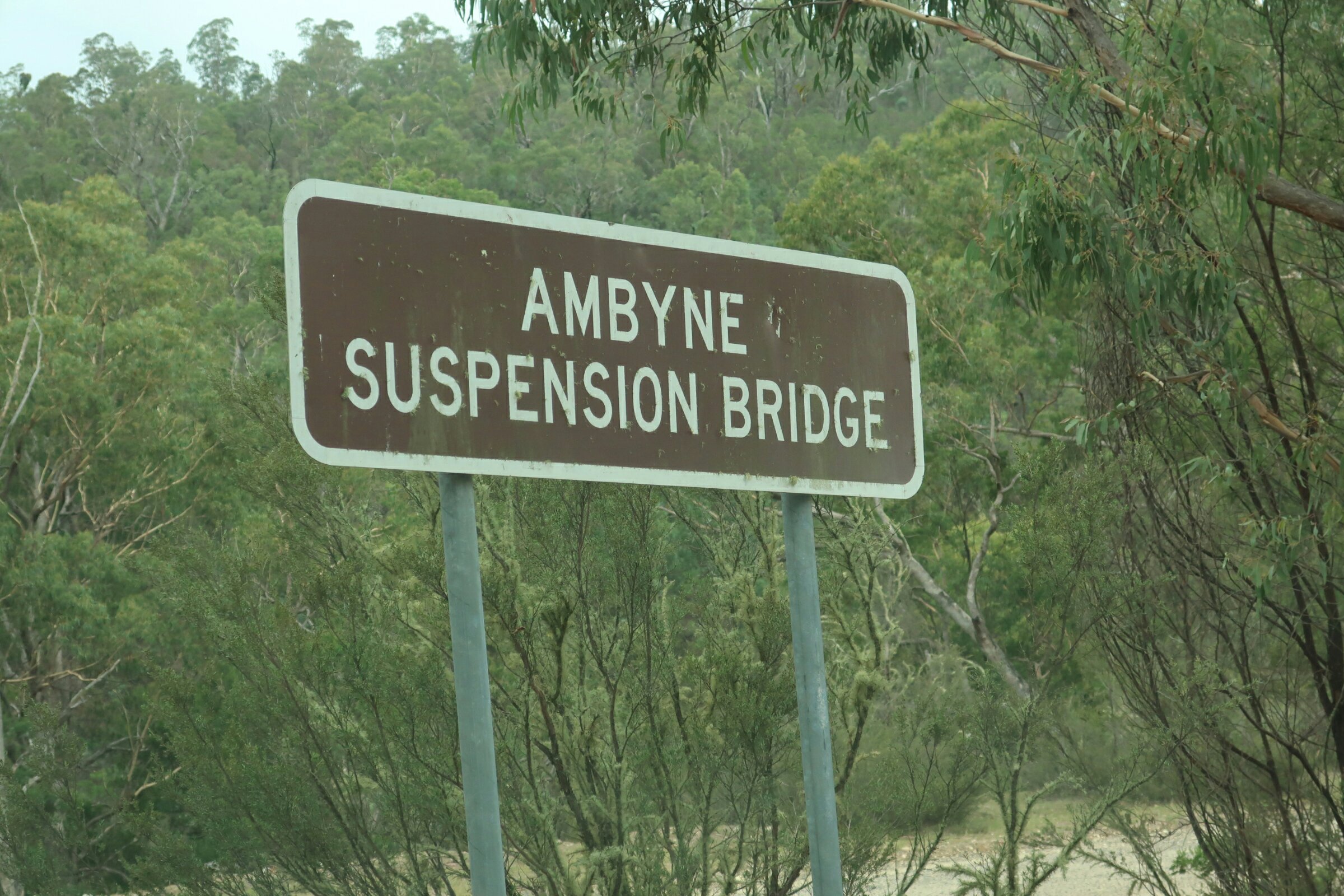 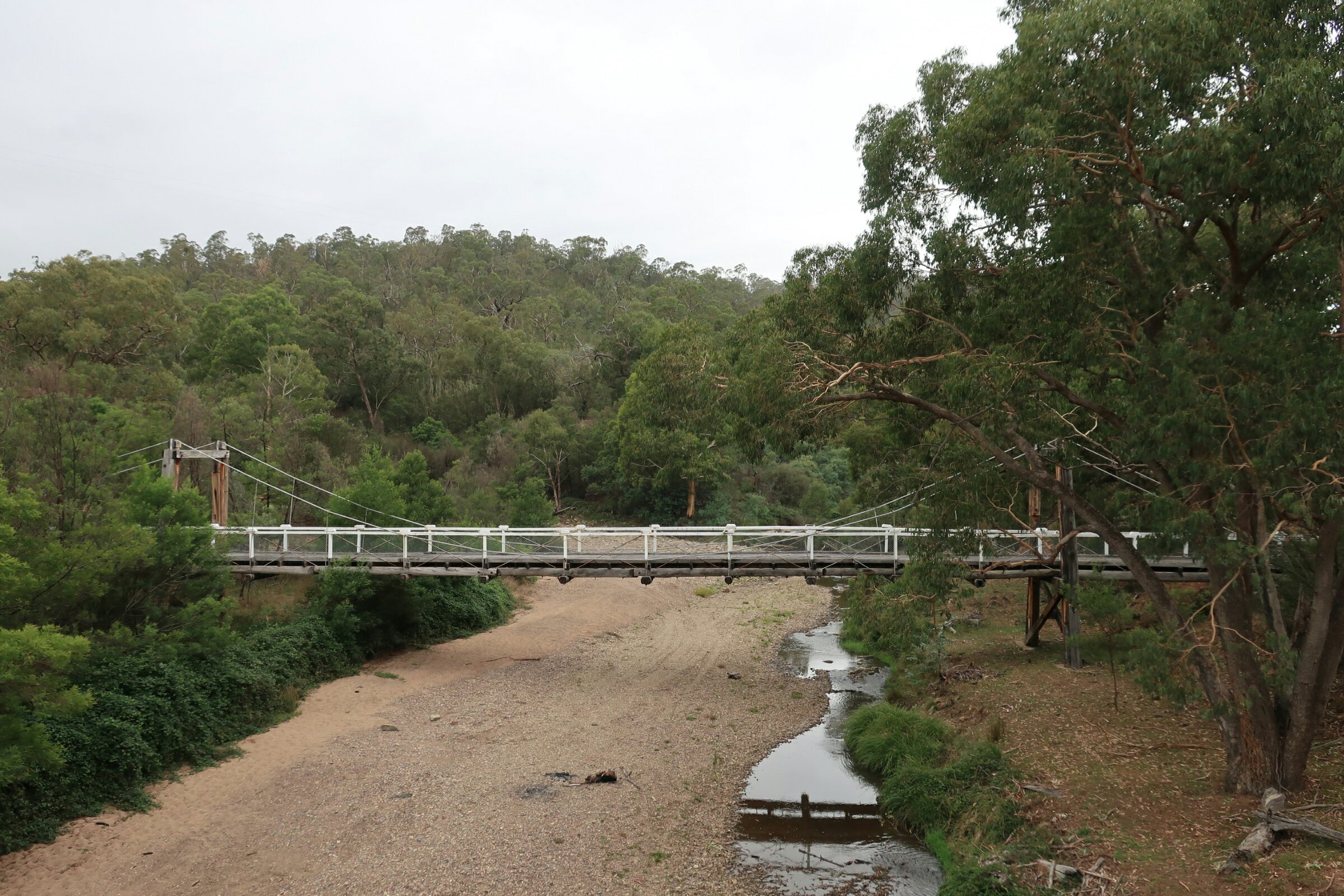 Stuart wandered down with the camera to take the photos this time. I was still driving.

From there we were to head off up a road that was being used for logging. The ladies at the community coffee centre had mentioned to us that the road signs saying the logging trunks were to use channel 40, didn’t apply only to the lorries. Locals had taken to letting the lorries know when they were on that road as well, plus when you leave it. Now we have a CB radio in Serenity, but we’ve never turned it on. Time for some educated guess work. It wasn’t hard, but working out what to say was, so we tried just to listen, occasionally catching a word here or there but never any complete sentences. Understanding anything was much harder and usually entirely guess work as well.

Then there was a man sitting at a road junction with 2 horsebox trailers, a camping chair and a dog (or two). Odd but we guessed that he was waiting for someone on horseback out for a ride. Our guess turned out to be more or less accurate, but I’d envisaged a young kid on horseback on the dead-end road given where he was waiting. It turned out that he was waiting for what was around many corners later. Presumably one or two of the horses were due a rest and there was one ranch man (?) who was walking alongside a tired looking horse. 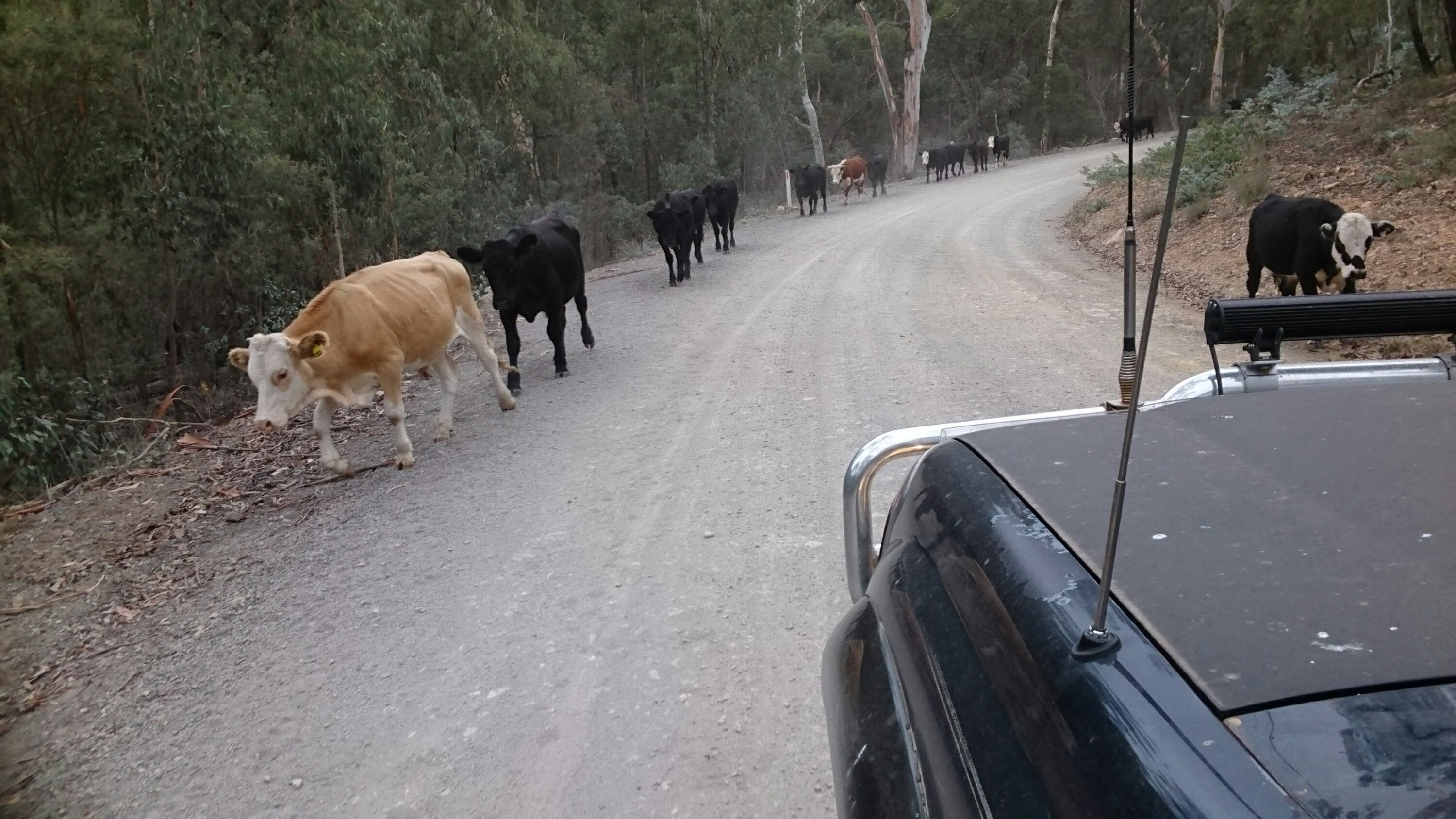 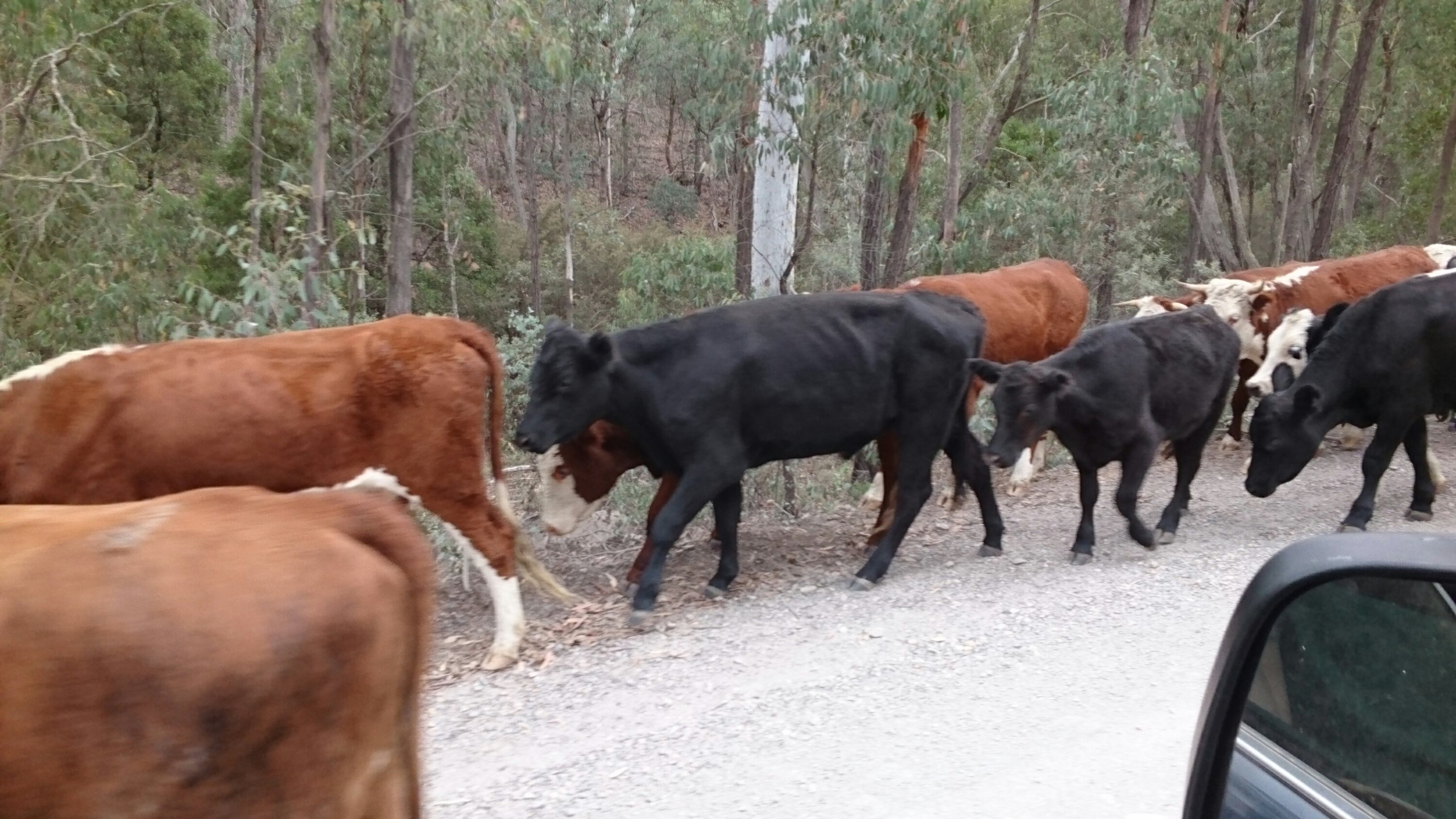 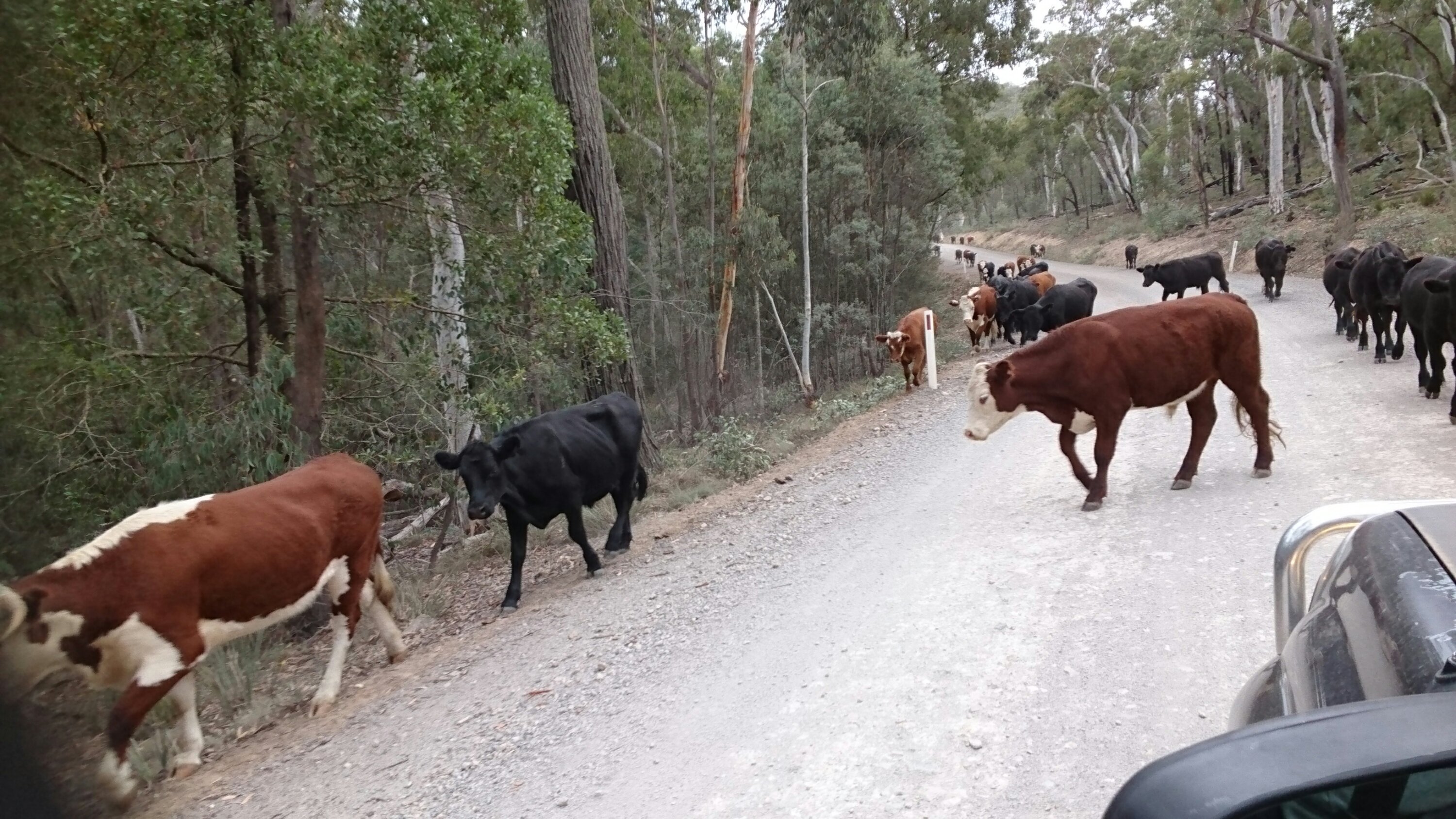 Stuart got fed up of photoing them because there were so many of them and to be honest I got fed up of having to jam my foot on the brakes constantly when one or two of the more “macho” of the herd decided to challenge Serenity, even to the point where they were already passed the front of her and doubling back to walk in front of me or even stand there challenging me to a fight! Yep twice that happened, each time it was a case of me losing sight of its head under the bonnet… Serenity has a very high up bonnet and a native blind spot at the front. Just drive at them, we’d been told. Clutch control was delicate, little more throttle, keep inching forward…

We guessed at there being several hundred (somewhere between 300-500) head of cattle being walked to winter pastures to be fattened up, mind you some of them needed it. And there were many, many men and horses usually in threes.

Just after we had cleared them we came to a wider tight hand bend and one of those logging lorries… I bailed for the edge of the road where all the loose gravel was. The lorry and two trailers were going fast and down hill on gravel… A combination not known for its ability to stop readily. I had the window down and it was quicker to flag the lorry down than it was to find the CB radio handset and let him know about the cattle. He needed to stop immediately, not by the time we had found the CB radio handset (it’s in an awkward position behind the steering wheel but also down by myleft knee and obscured by 2 levers). Luckily he got the message and there was no locking up of brakes or screeches from around the bend. We’d never heard a thing from the CB radio about him being on the road but guessed it was because of the twisting and turning, up down nature of the minor back road we were on. Though in reality it was wider than the main road we had left. Just as we got to the main road another logging truck turned off onto the road, this time other than his identity we heard the message over the radio.

The main road was tarmac, white line up the middle and before long had straightened out and became fast and boring. It was getting time for lunch.