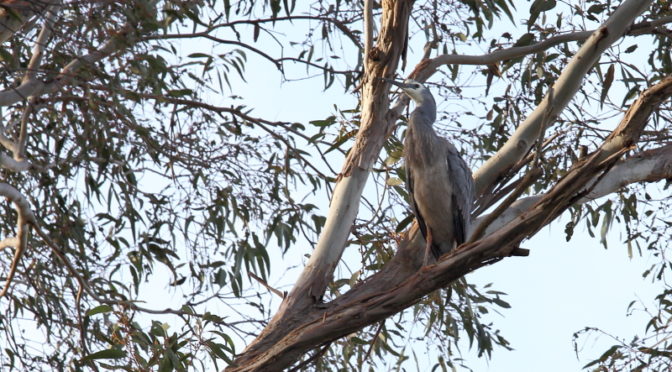 I’ve been trying to keep a log of the visitors to the garden and learn them.  This sometimes proves harder than expected and there are frequently LBJ’s (Little brown jobs) and in our garden medium sized black jobs at the moment!  There are a huge number of black medium sized birds, 1 has no white on it, another only has a little white on it, another has more, a 3rd has lots… and then there is a smaller one which is black on the top and whitish underneath.  Plus there are the grey series… it is all rather daunting to be honest!

So here are some of the birds that are visiting our ‘garden’.

Now the Crimson Rosella despite looking really nice, is a pain in the backside to put it mildly.  It is a rathe bold bird, hence the photo of it, and has taken to raiding the chook house for grain.  It has even worked out how to use the autofeeder that the chooks have (to stop any potential rats and mice) from feeding off the grain).  So I have had to change all of the settings very carefully because Harriet Houdini or HH, out little black chook is very light and the Crimson Rosellas always seem to come about in pairs!  At the moment, the autofeeder opens when the stand on the end of it, but as they walk towards the grain, it closes on them!  It still works for HH, but we are feeding her and another one (JJ2) up at the moment because they are both so light.  With any luck the Crimson Rosellas won’t work out that if the 2 of them stand on the step, they can still activate it!

We also have  Eastern Rosellas visiting our garden but they are much harder to get near to photograph so I will have to use an image from Wiki to show you what they look like.  Luckily they are so shy that they are not an issue with the chooks! 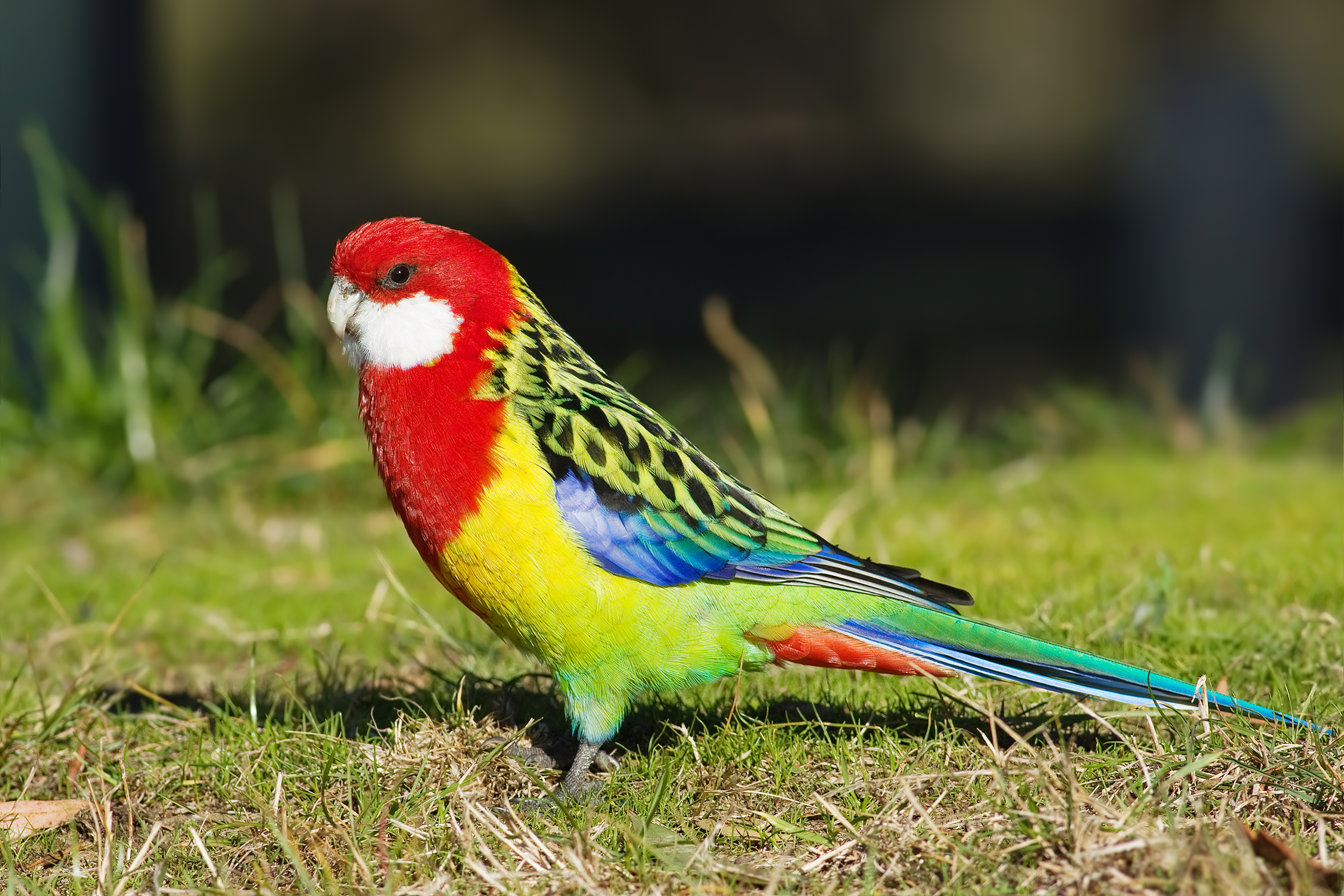 Another that I somehow do not have a photograph of (and why defeats me) is the Sulphur Crested Cockatoo.  Given we have so many of them I am at an utter loss as to why I don’t yet have a photo of them to be perfectly honest and perhaps I do, but I can’t find it.  These are a touch of a pest to be honest because, like the Crimson Rosellas, they rather like the grain that the chooks eat, but thankfully they don’t tend to be as brave or as bold as the Crimson Rosellas, and HP will stand up to a couple of them at a time even when the craw and crow at him repeatedly with their crests raised!  But when they arrive in numbers and take over, the girls and HP all retreat!

We also have a heron, what I believe to be the White Faced Heron, but I am happy to change my mind on that.  It temporarily took up residence around here, but seems to have moved on to the other side of the valley (luckily I have seen the goldfish since so I know they are still here which given that the pond they live in now supports a pair of Australian Wood Ducks, I am rather grateful for).

The pair of Australian Wood Ducks have remained as elusive as ever.  They run a mile at the slightest indication that you have a camera in your hand and/or that a door/window is about to be opened to try to view them  On the rare occasions that I have caught them off guard, it is usually because I was doing something else and don’t have the camera setup or usually to hand! So another photo from Wiki and I will add mine in due course.  They are not rare and are wide spread.  In the winter we had a good flock of them through the grassland we had and they were one of the first birds that we successfully identified here at our new home.

So and now to those black and white birds.
Firstly we have the Australia Raven and surprise, surprise I don’t have any photos of those either.  I find I am going to have to make a list of what I don’t have photo’ed yet and resolve that!

The Australian raven (Corvus coronoides) is rather a pain to be honest.  It has taken to stalking the chook house and unless I don’t let the chooks out of the outer enclosure until they have all lain, and swipe the eggs myself immediately, then I can guarantee that the eggs will vanish.  Some will be stashed in the immediate vicinity.  I have located some of the stashes and taken to actually leaving some fake wooden eggs out for the girls to sit on instead.  The girls like to sit on an egg before they lay which means getting them laying in the morning is hard work!  Once an egg is lain, then the rest who are laying that day, all lay pretty quickly.  So the answer was a number of fake wooden eggs.  Somehow the ravens just know now and don’t bother going into the chook house after an egg if there are only the fake ones around.

Following on from the Australian Raven is the Australian Magpie (Cracticus tibicen) or the ‘ot owh’ bird – you know, the sound a young child makes when they know someone is in trouble, ot owh.  Well you try writing it down!  But that is very definitely the sound they make, time and time again.  In fact, as I type this, I can hear one not far from me making that very sound!

Next one our black and white birds list comes the Pied Currawong (Strepera graculina) though I am not going to try to identify which of the subspecies we have! This one can easily be mistaken for either the Australia Raven (look at the eyes and beak – they are the same). It is only the tail features with the white underneath that give the game away, or for the Australia Magpie which has much more white on it, and a totally different beak. 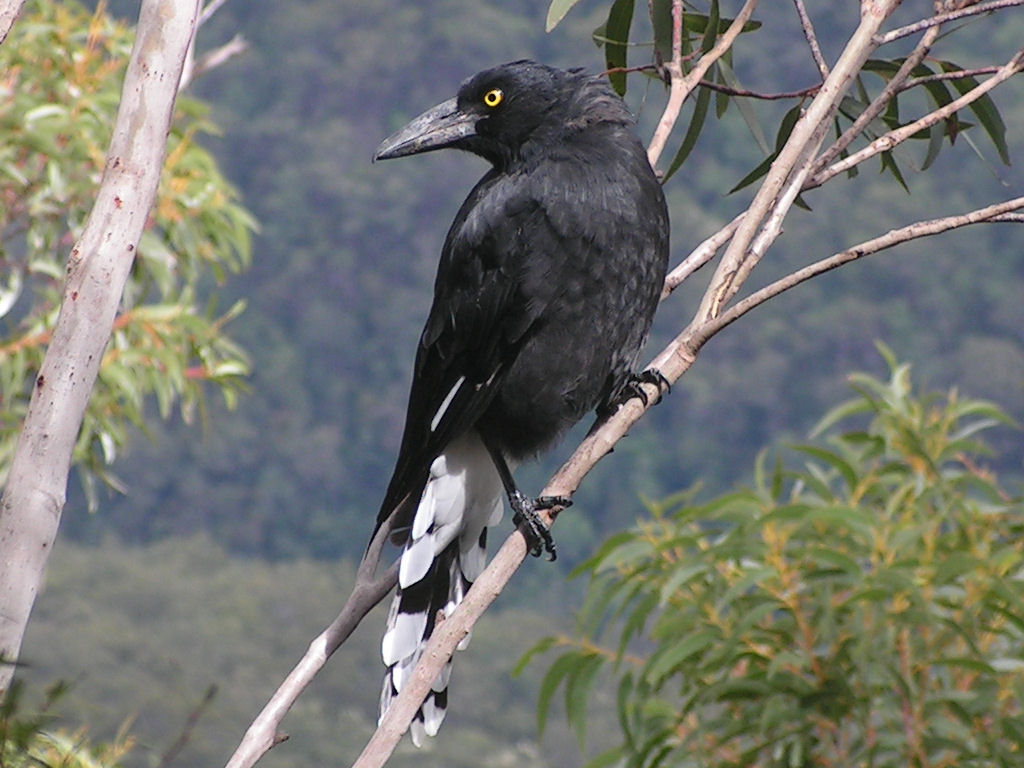 Next comes the Magpie-Lark (Grallina cyanoleuca) which is frequently mistaken here for something else.  It is however much smaller than the Australian Magpie above and once you know the difference… Below is a female Magpie-Lark given away by her white throat.  The male has a black throat and with that I have learnt something new for today…  I actually quite like them and love spotting when they visit.  One day I’ll actually get a photo of them, but it won’t be this good because they don’t come that close and I don’t have a long lens anymore. 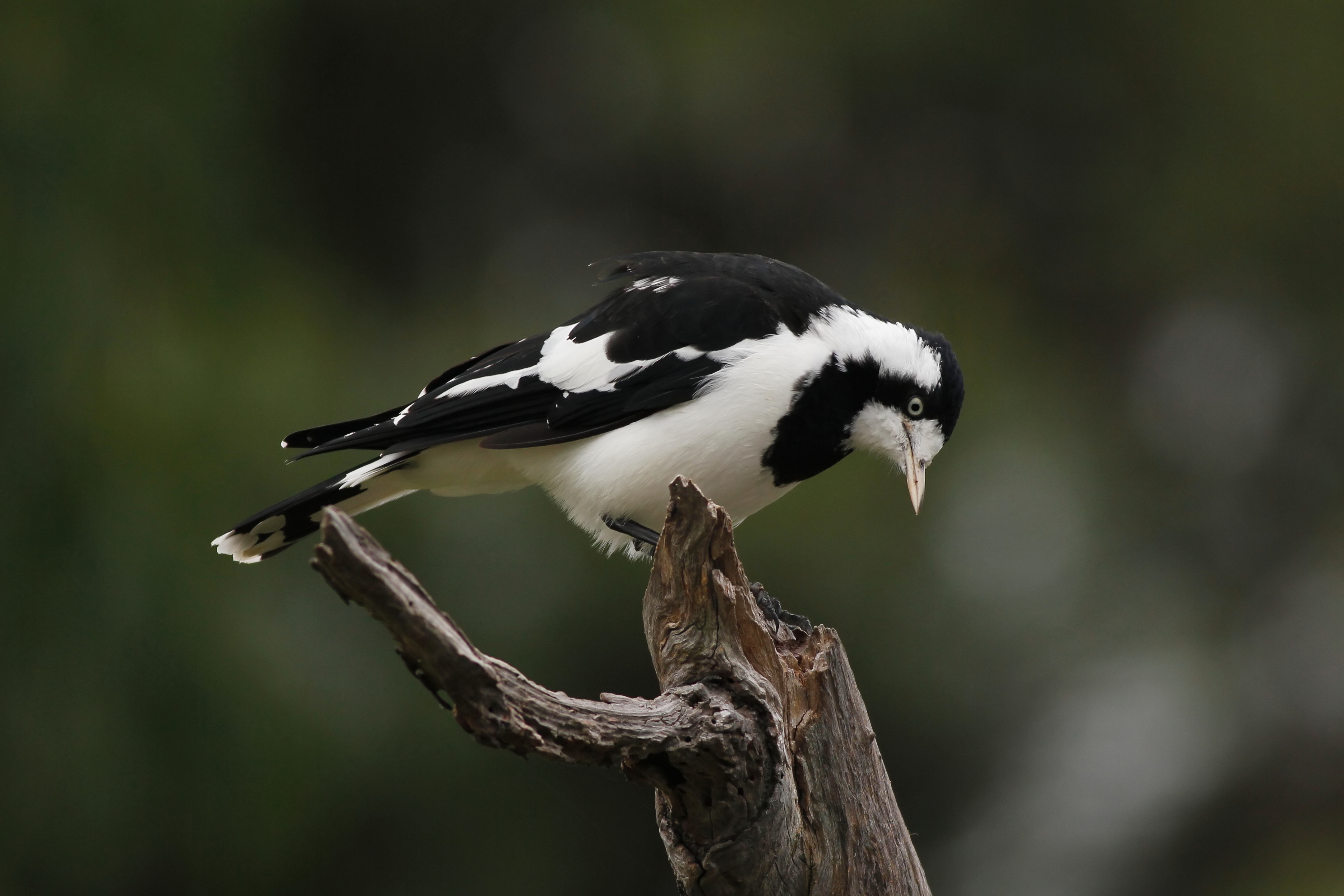 I’m pretty certain I have also seen the Restless Flycatcher (Myiagra inquieta) but it hardly stays still long enough to confirm it exists let alone consider getting a photograph of it, so anything I do get is going to be a lucky shot!