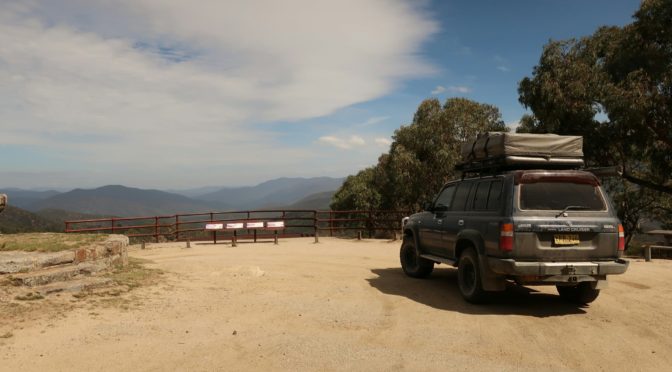 The next day dawned clear and blue again. This time however there are a few clouds in the sky. A sign that the weather was due to change, but it didn’t really matter. Today was a transit day and we needed to get out on the road. We were aiming for Eden because that was where Stuart wanted to go to. But we didn’t want to go there the easy way. We wanted something more interesting. 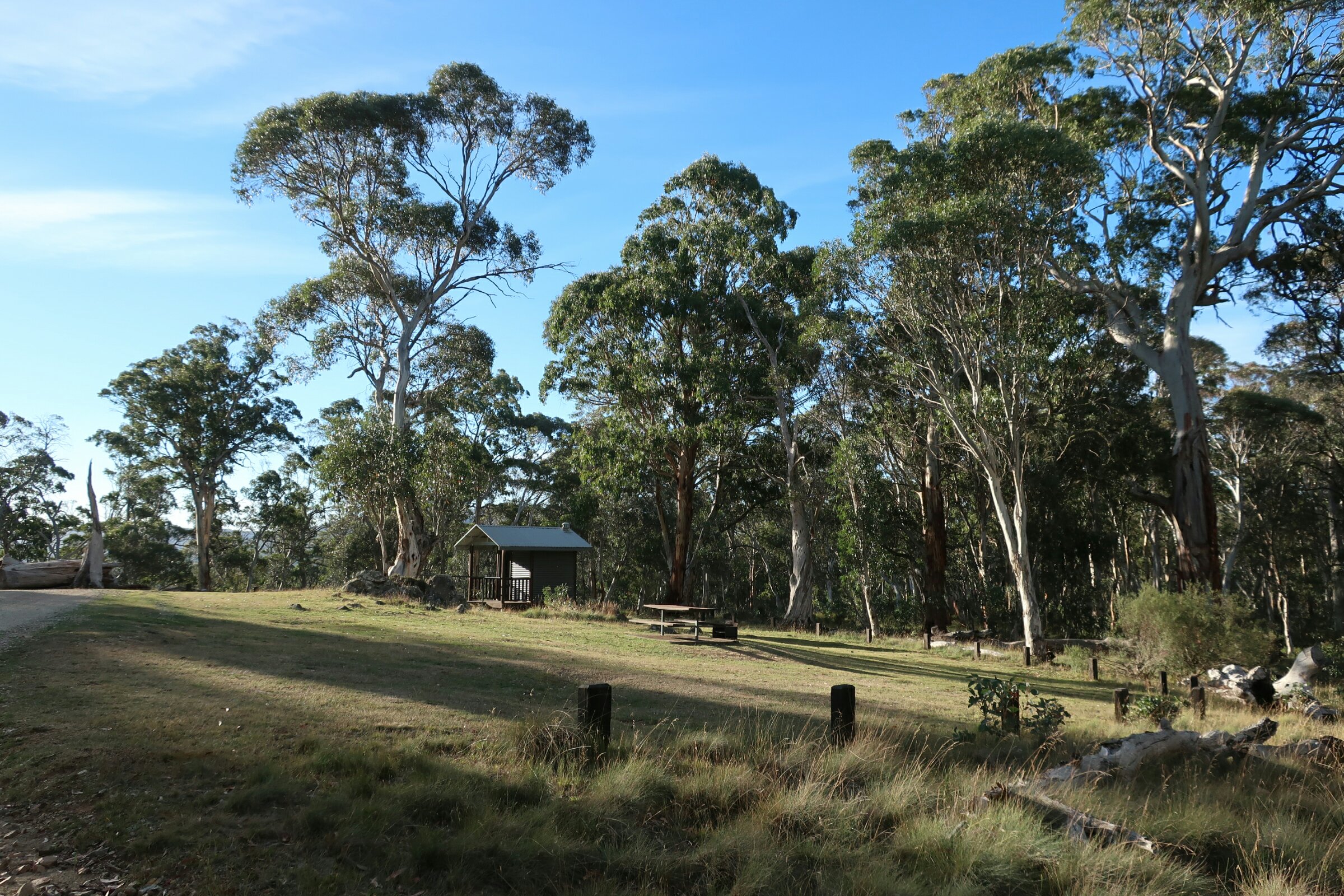 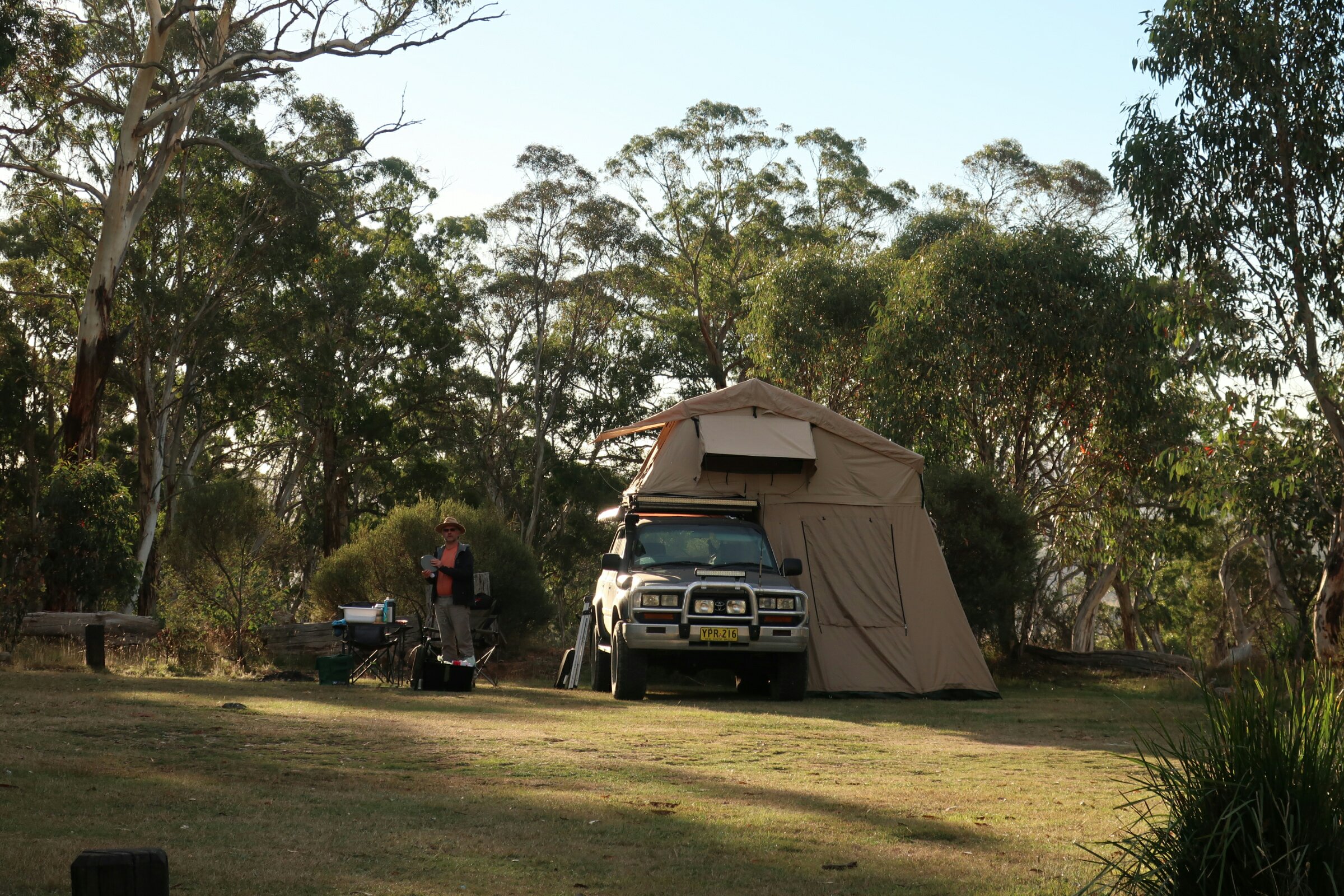 When the flasks were full, the roof tent down and everything packed and ready to go, there was one last thing to do. Fill up the fresh water. A lot of these sites don’t have fresh water, well actually they don’t have water full stop. This one had an old concrete tank at the top of the hill which collected rainwater from its roof. And there was a tap at the bottom. More importantly, with no one else around, it was easy to get Serenity up to the tap to fill the fresh water up. After all, our fresh water was rain water…

Then we were back in the land of boring roads, smooth, fast and straight and we knew the scenery all too well.

Lunch was had at the raw food Cafe in Cooma. We both had some delicious tortilla type wrap filled with “feta” and spinach that I forgot to photo! But deserts were photographed. 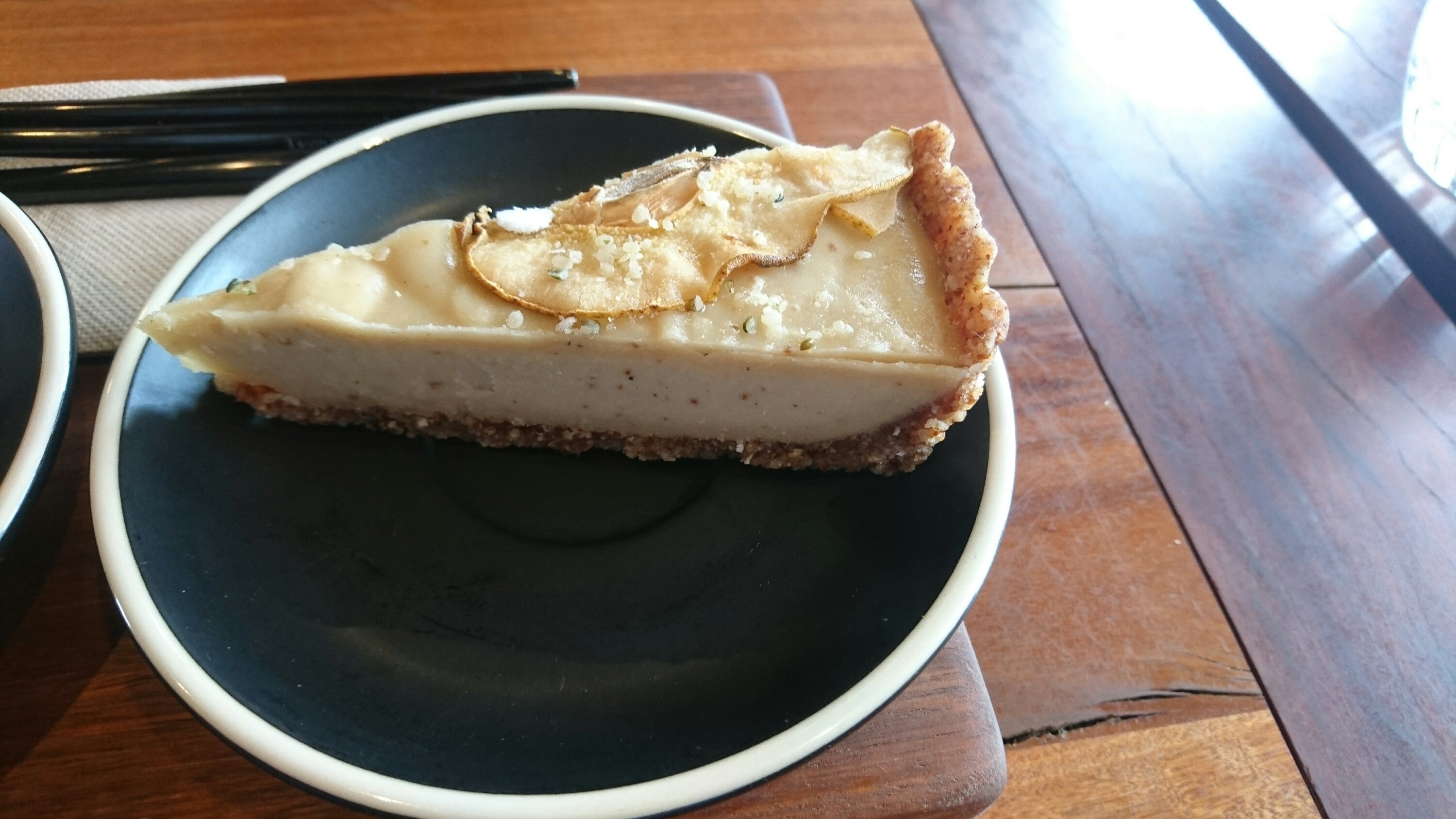 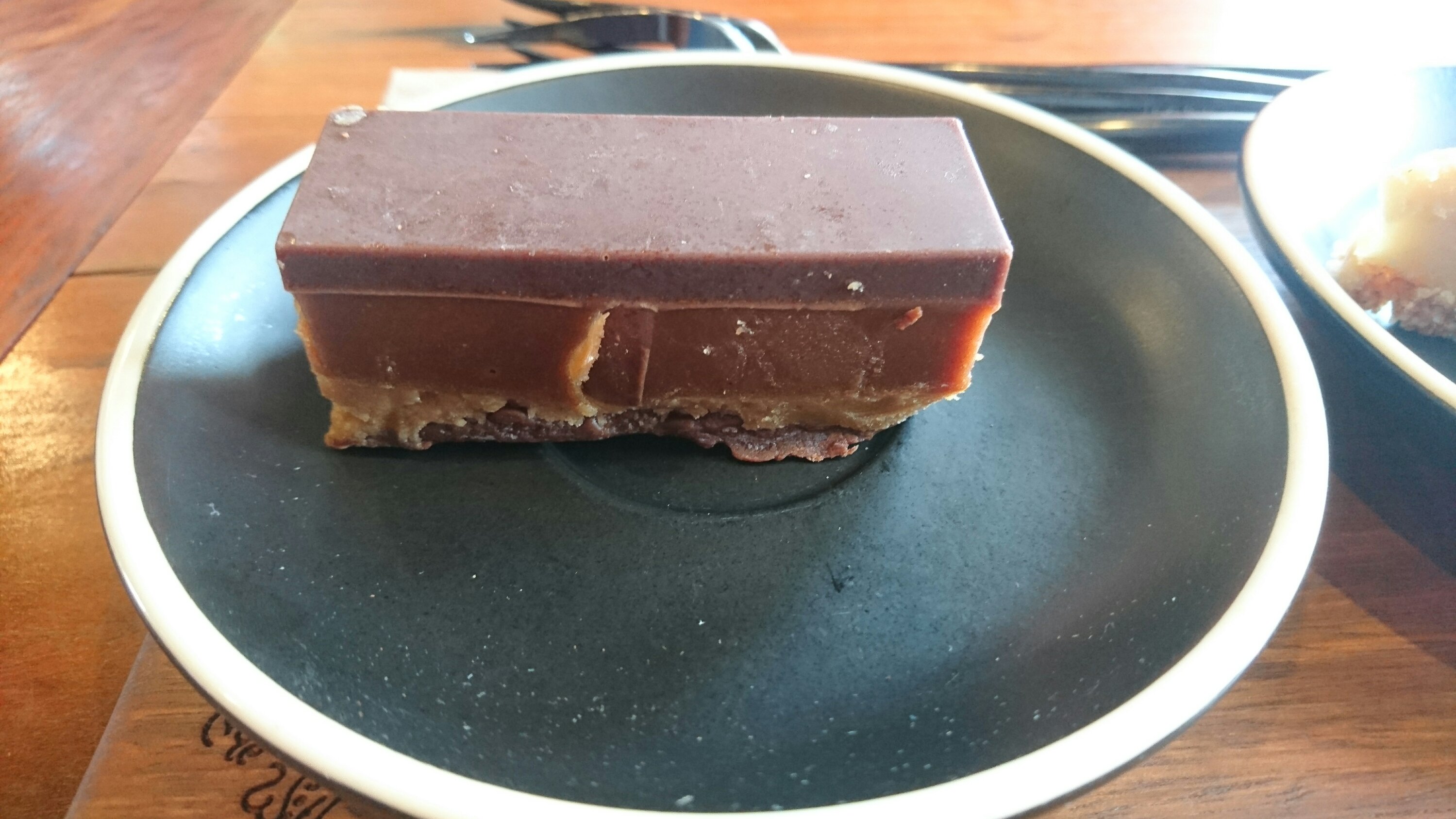 The chocolate caramel slice (all dairy free) was excellent. Stuart had the pear and vanilla slice.

Some supermarket shopping was then done and Serenity also needed feeding (LPG and petrol) and we were ready to get on our way once we decided on a route to take.

Eden was the destination, but we were not to make it that day. When browsing over the paper maps when we first arrived in Australia, I had spotted a major highway in the mountains that wasn’t sealed. It had intrigued me ever since and we decided to do it. I can confirm that it hasn’t been sealed yet. It probably won’t be. And it would be an awful road to drive in the school holidays. But right now, it was a lovely clear blue sky day, windows down, wind in your hair type day… oh and a mouthful of dirt. Forget the windows down idea… 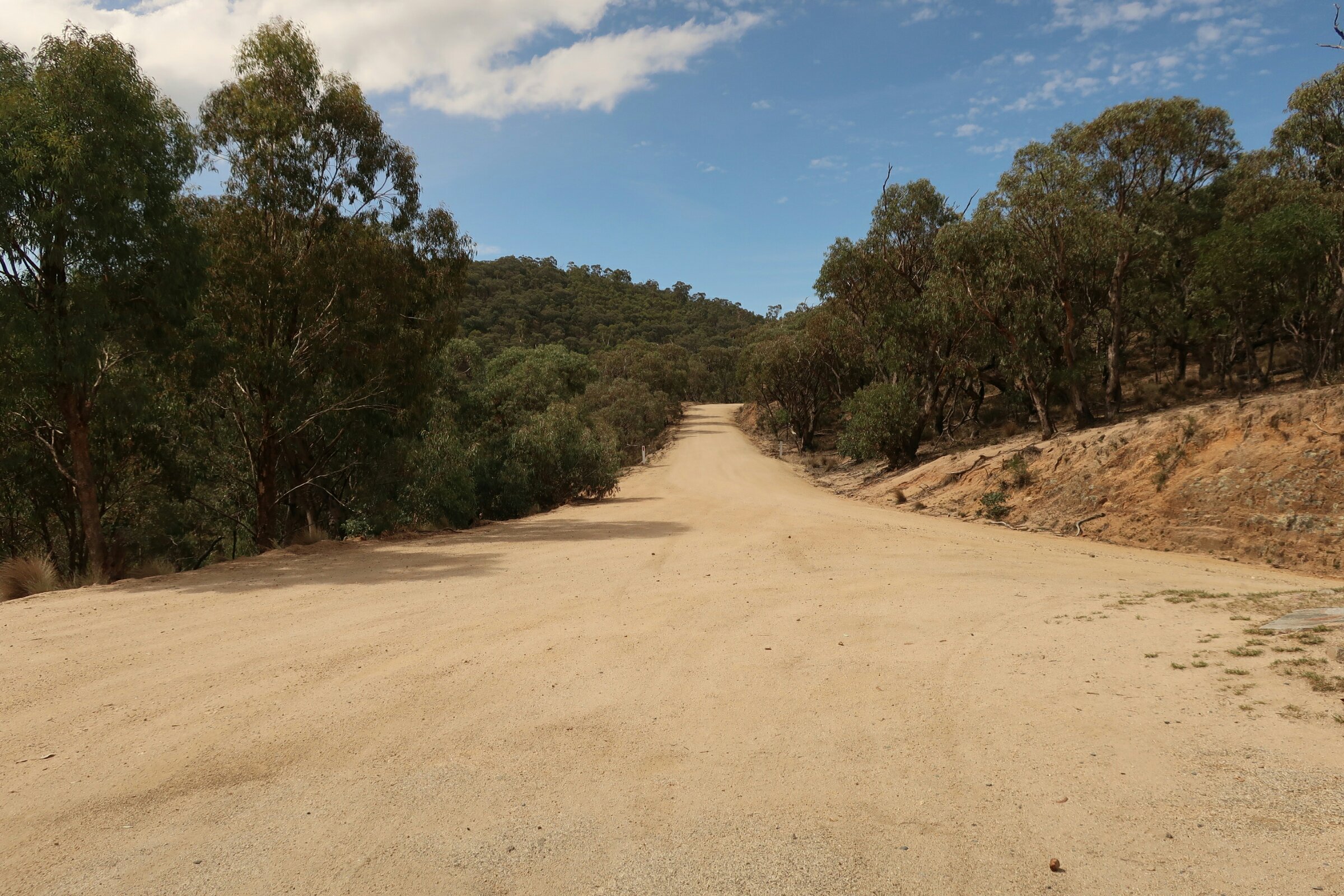 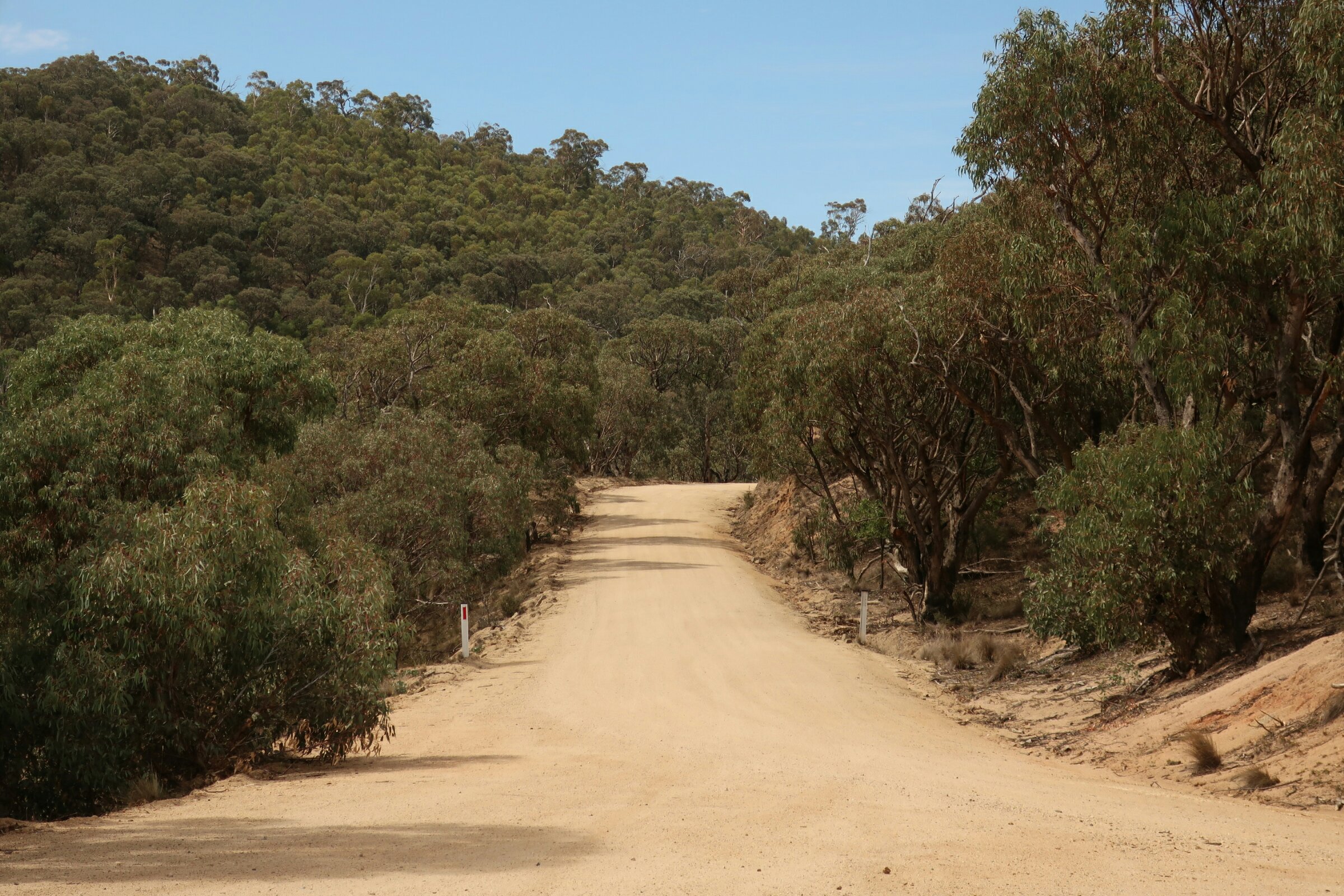 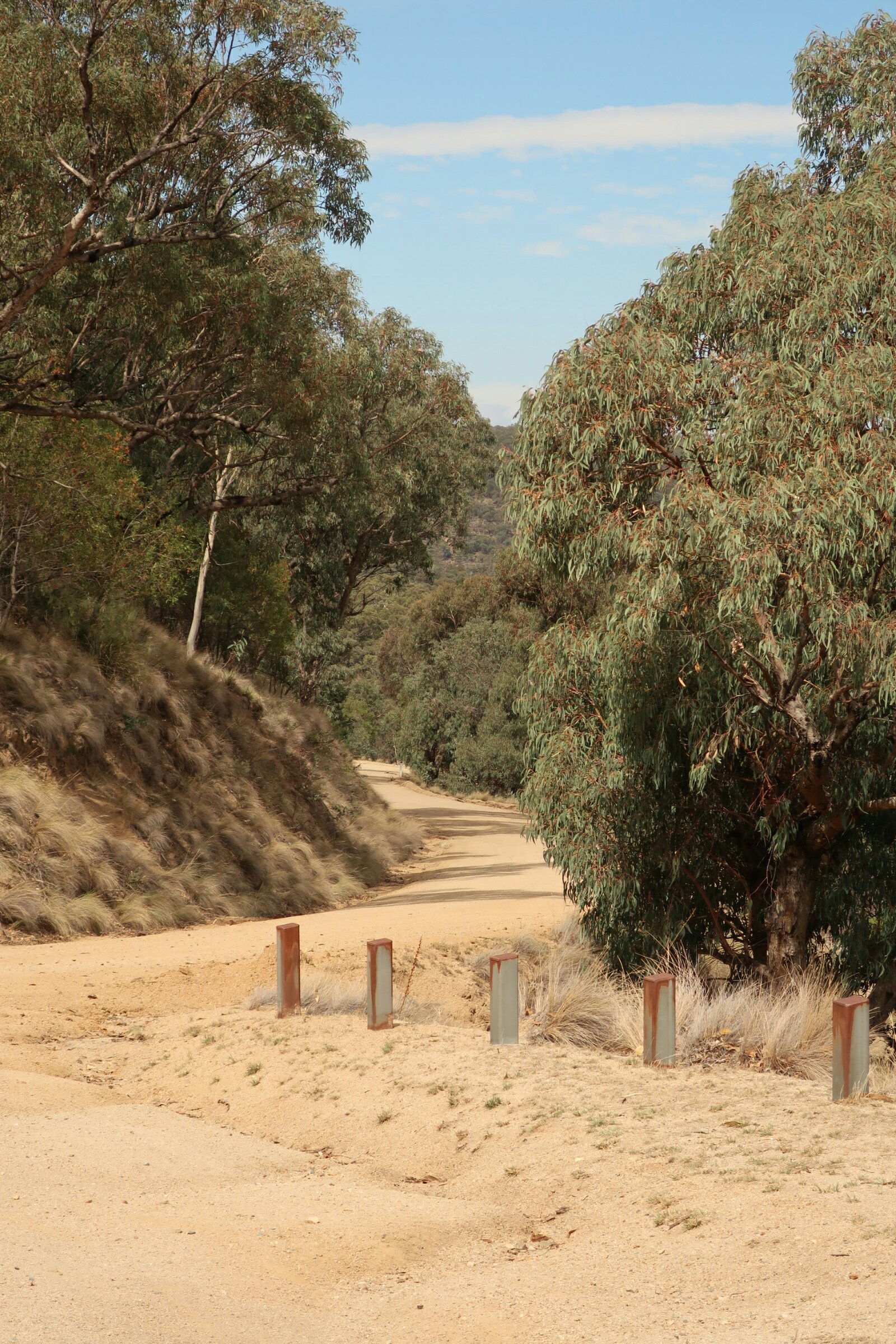 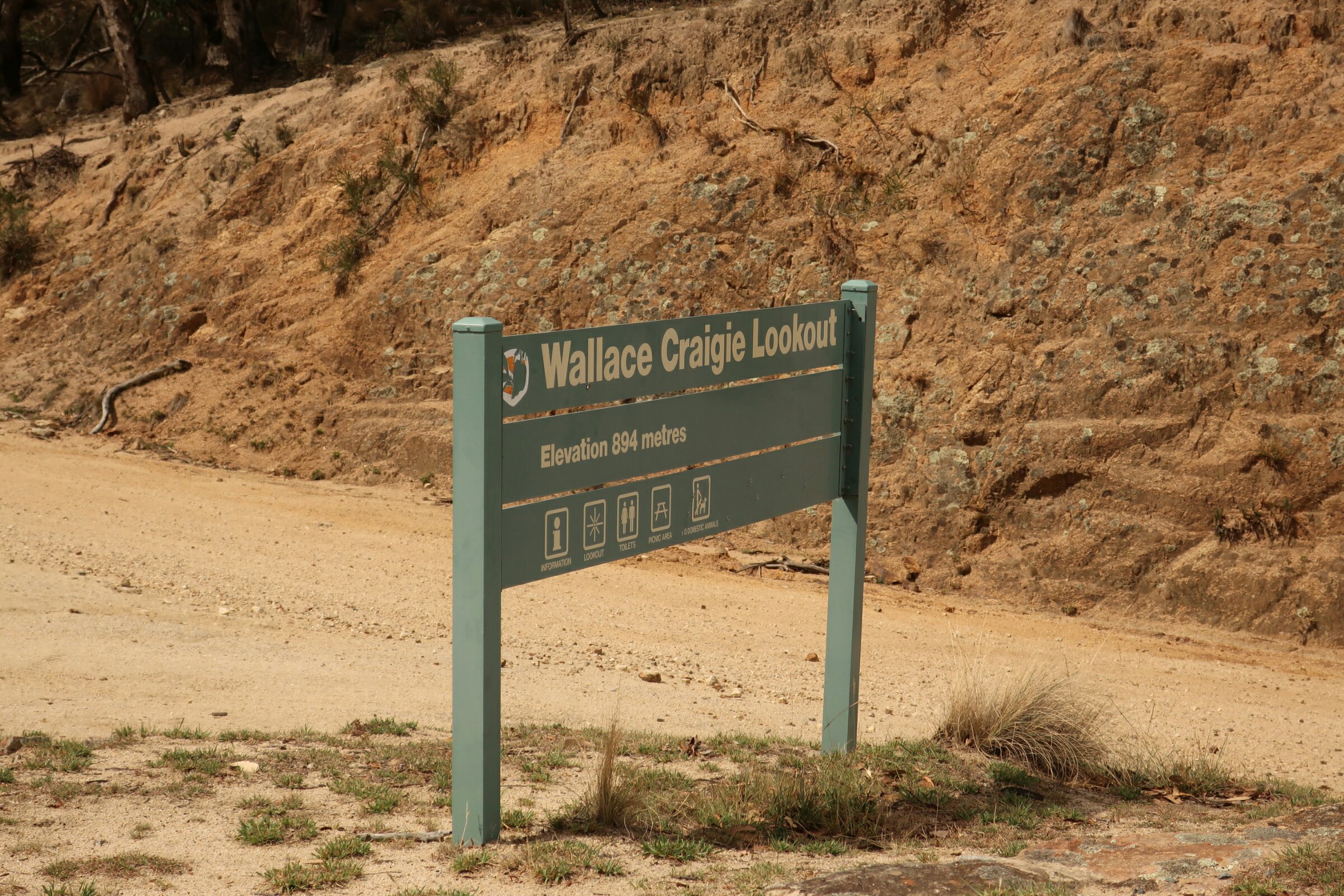 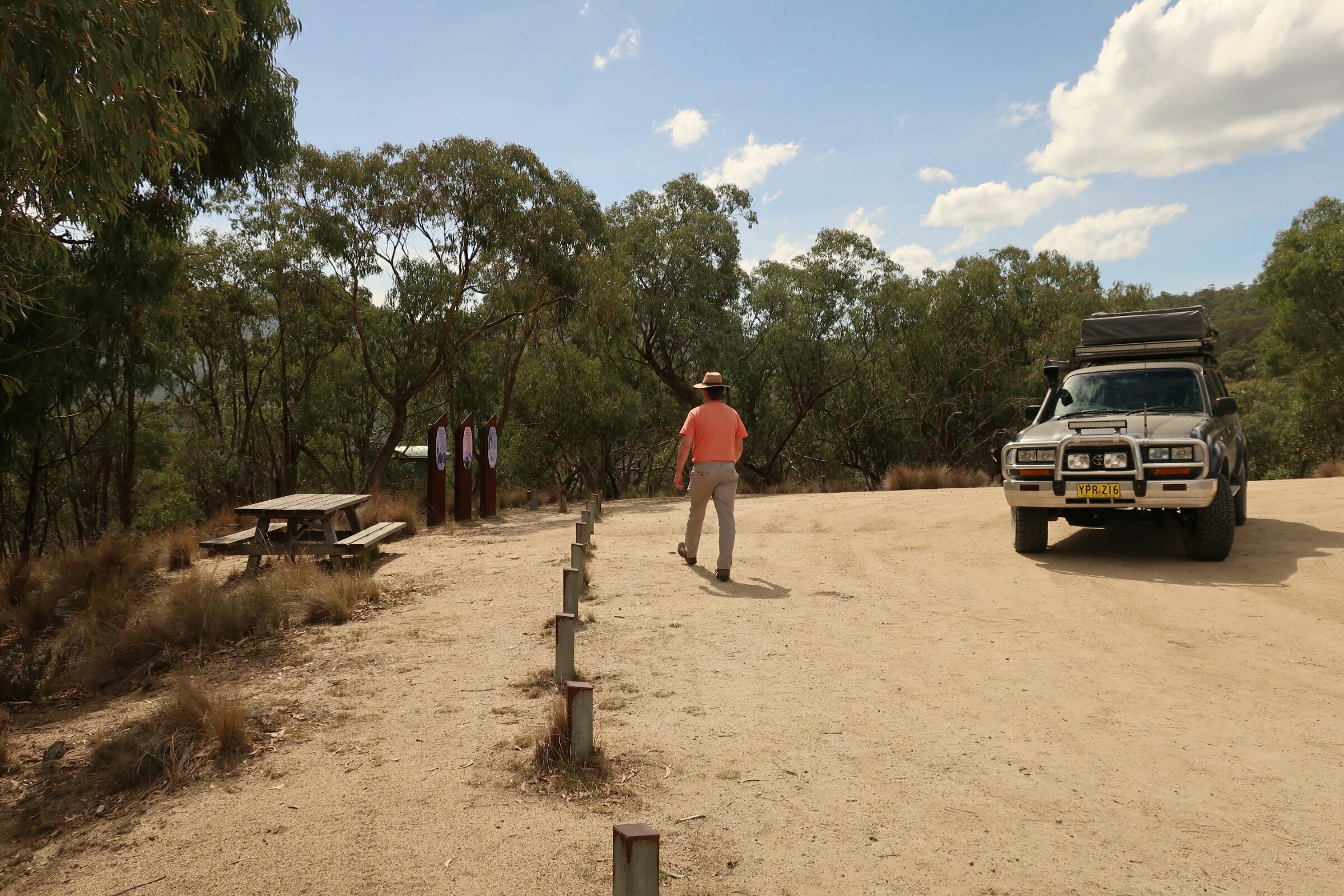 We’ve learnt that whenever there is a lookout, is worth stopping because all you’ll have seen up to this point will be trees. If you want a view and some literature to read whilst someone else heads off into those trees (you can just make out the roof of the composting toilet… ) you need to stop at these lookouts. 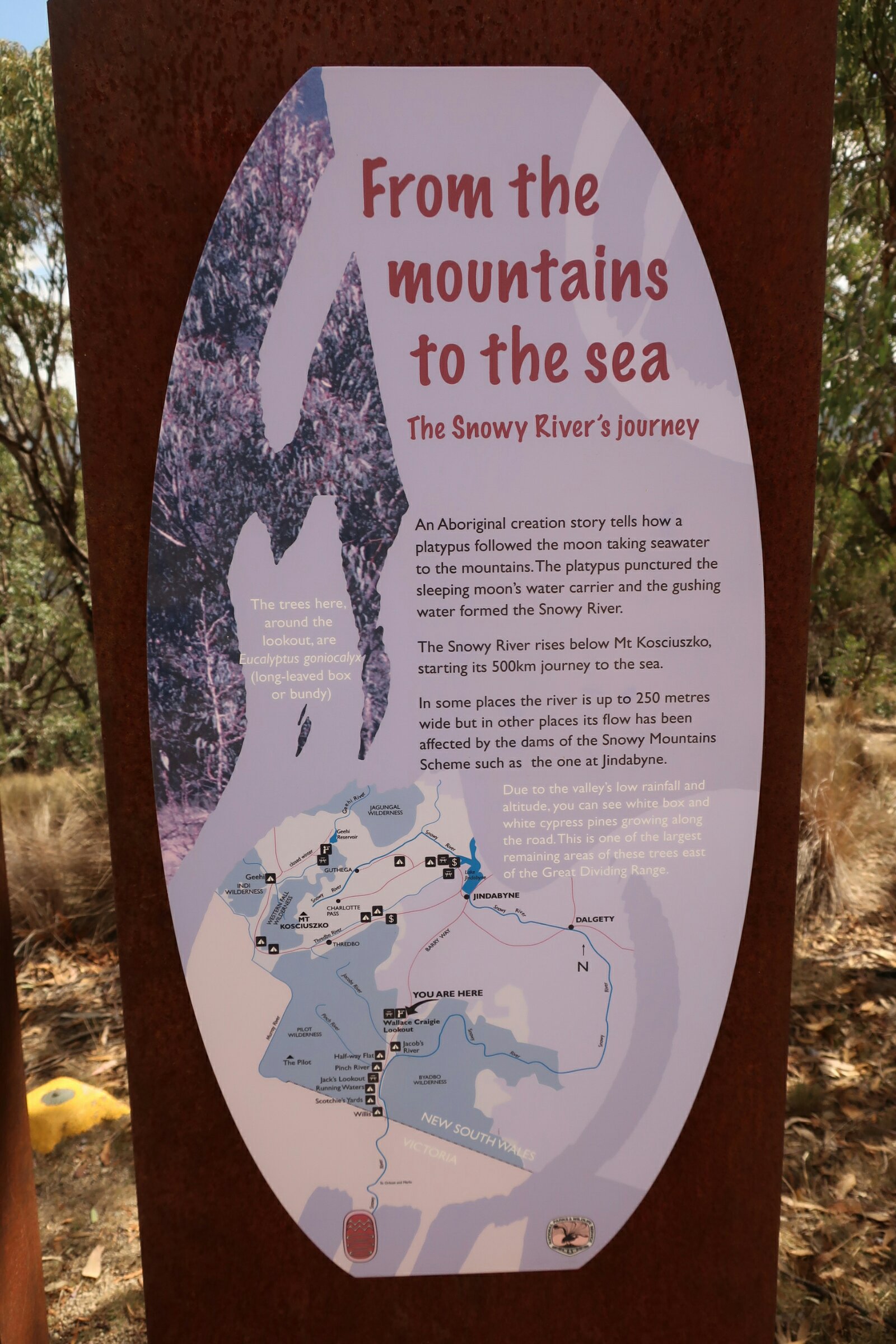 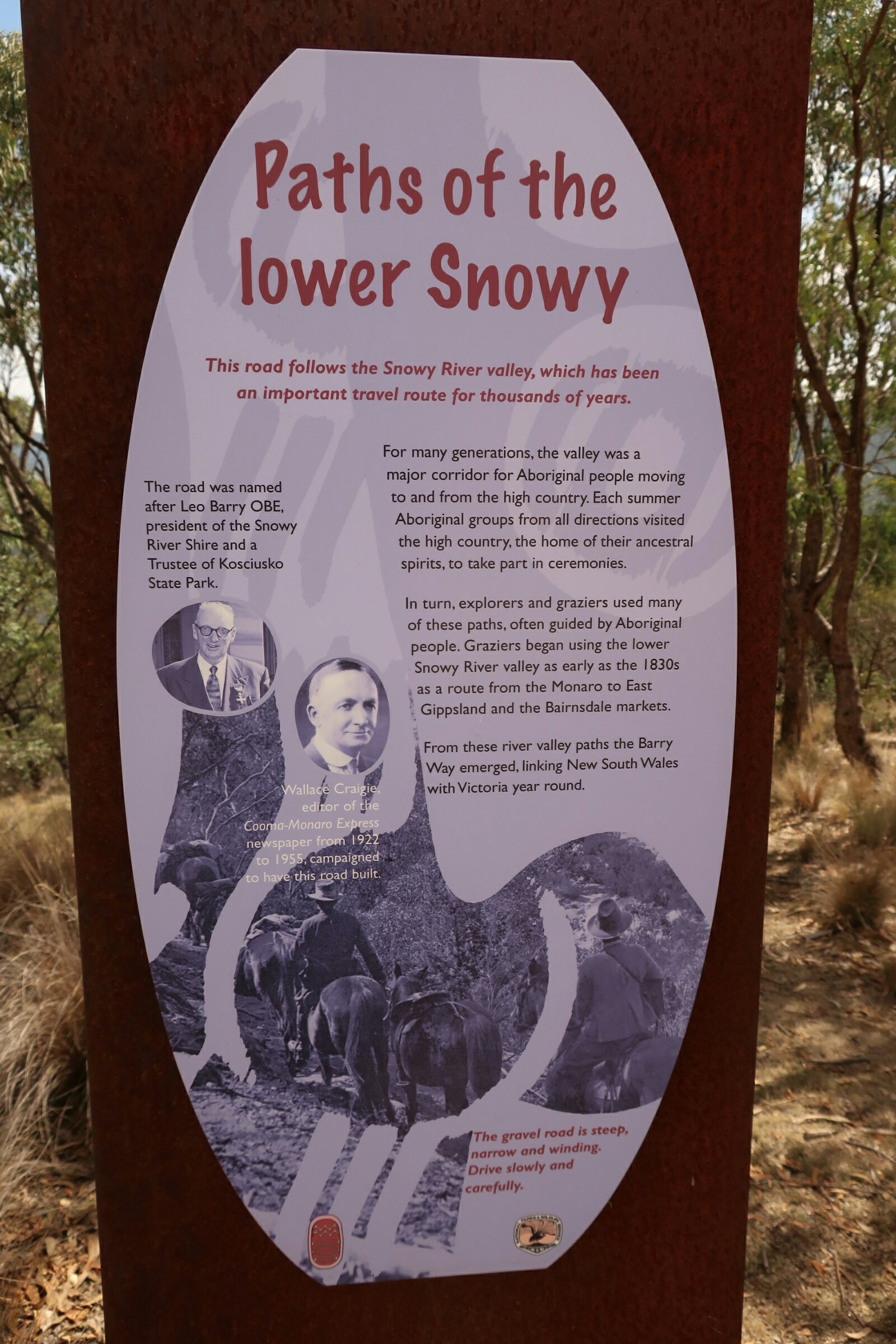 Ok, now for the view. I’ll point out that every stretch of road you can see in the entire photo was road we were to soon drive. There were no other roads, only the one ahead of us. 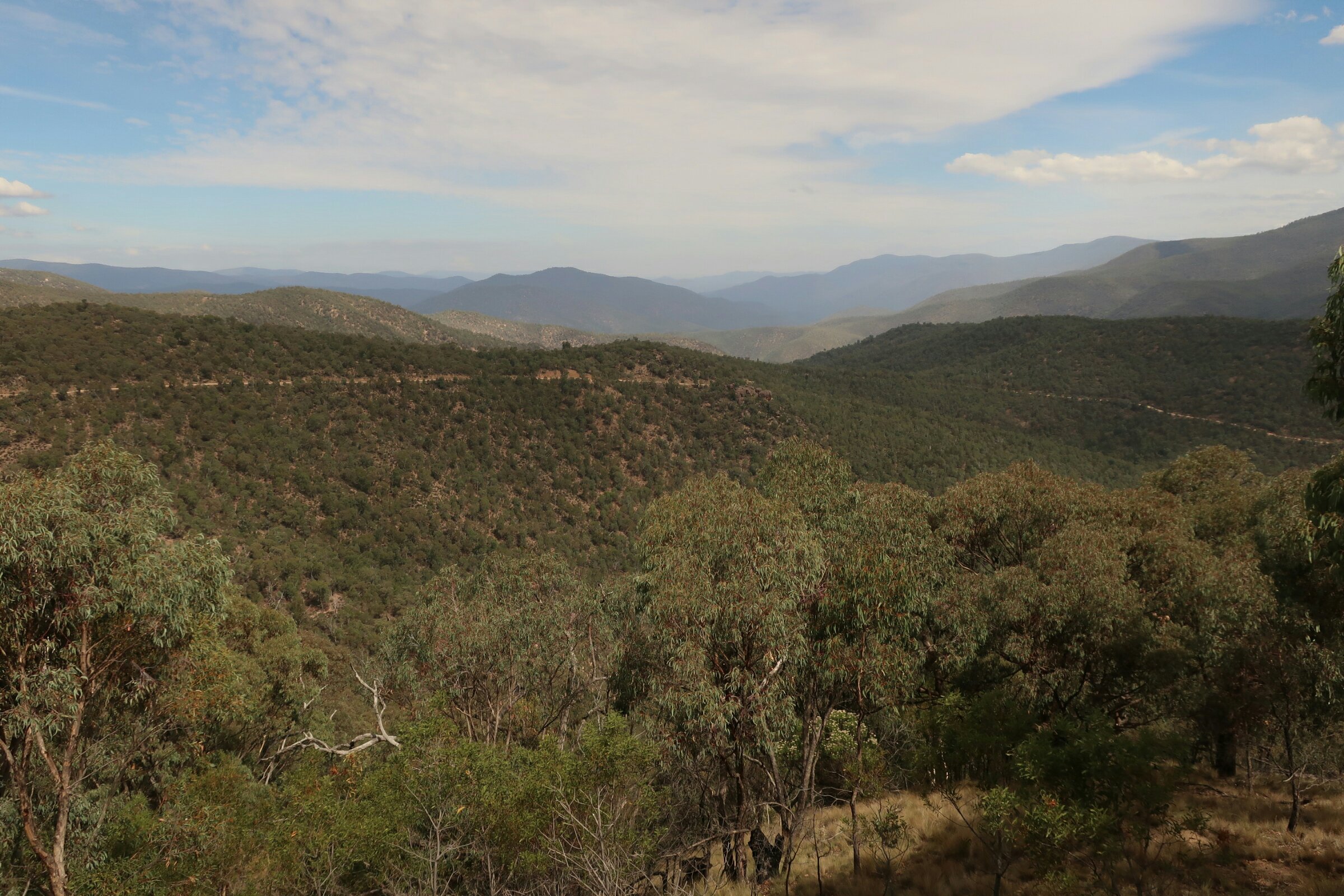 Yep, even that road over on the right… Don’t ask me how we got there but we did. 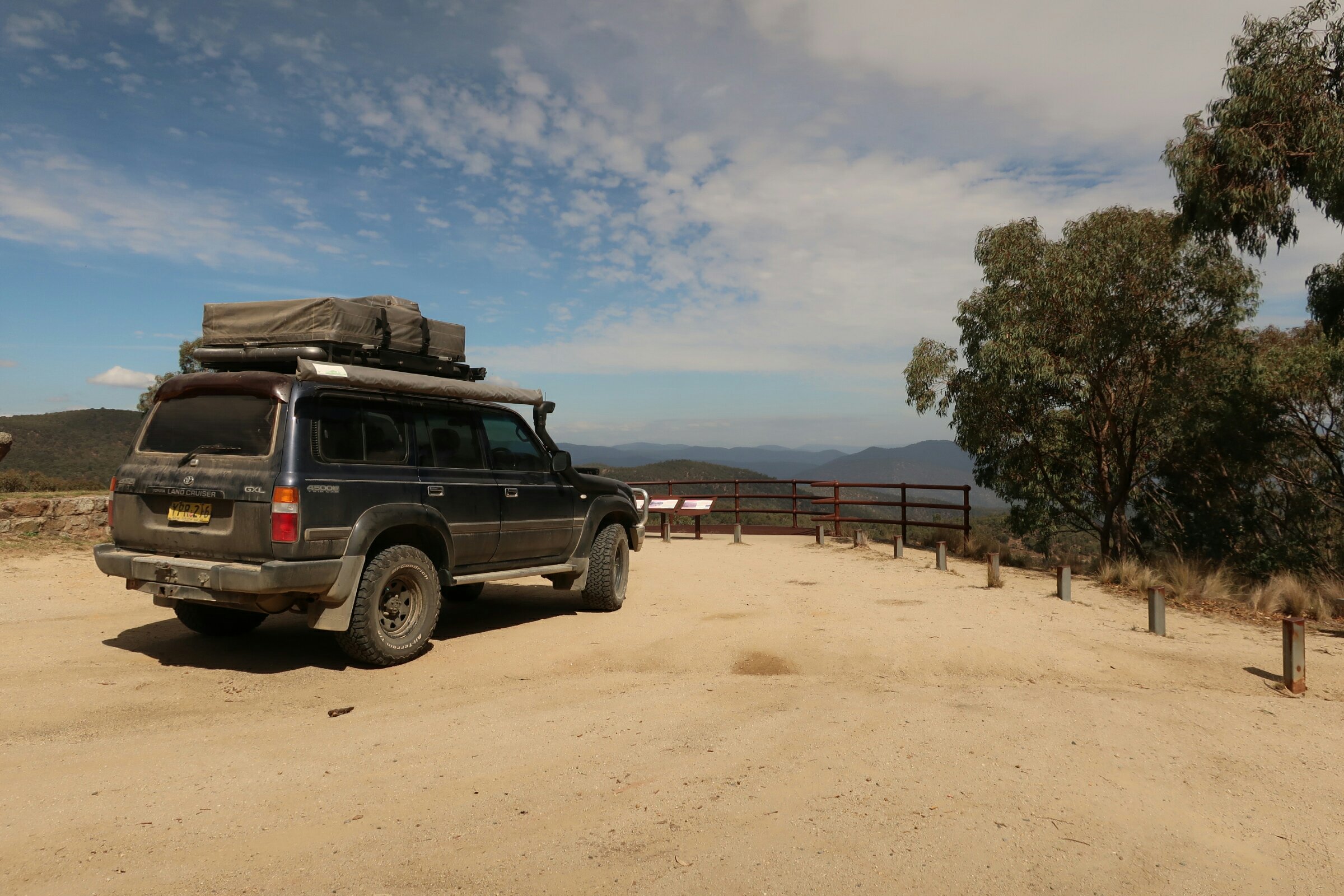 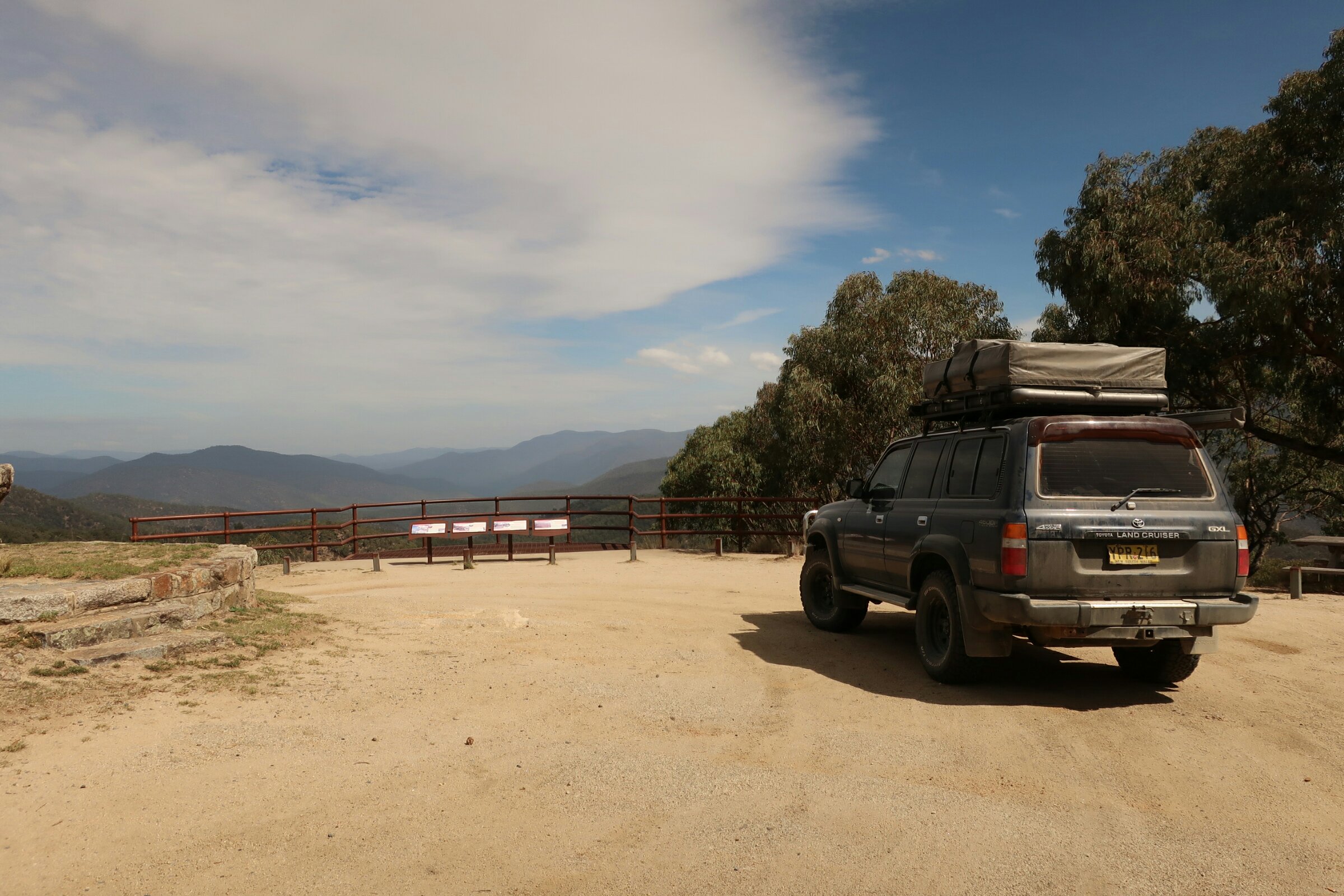 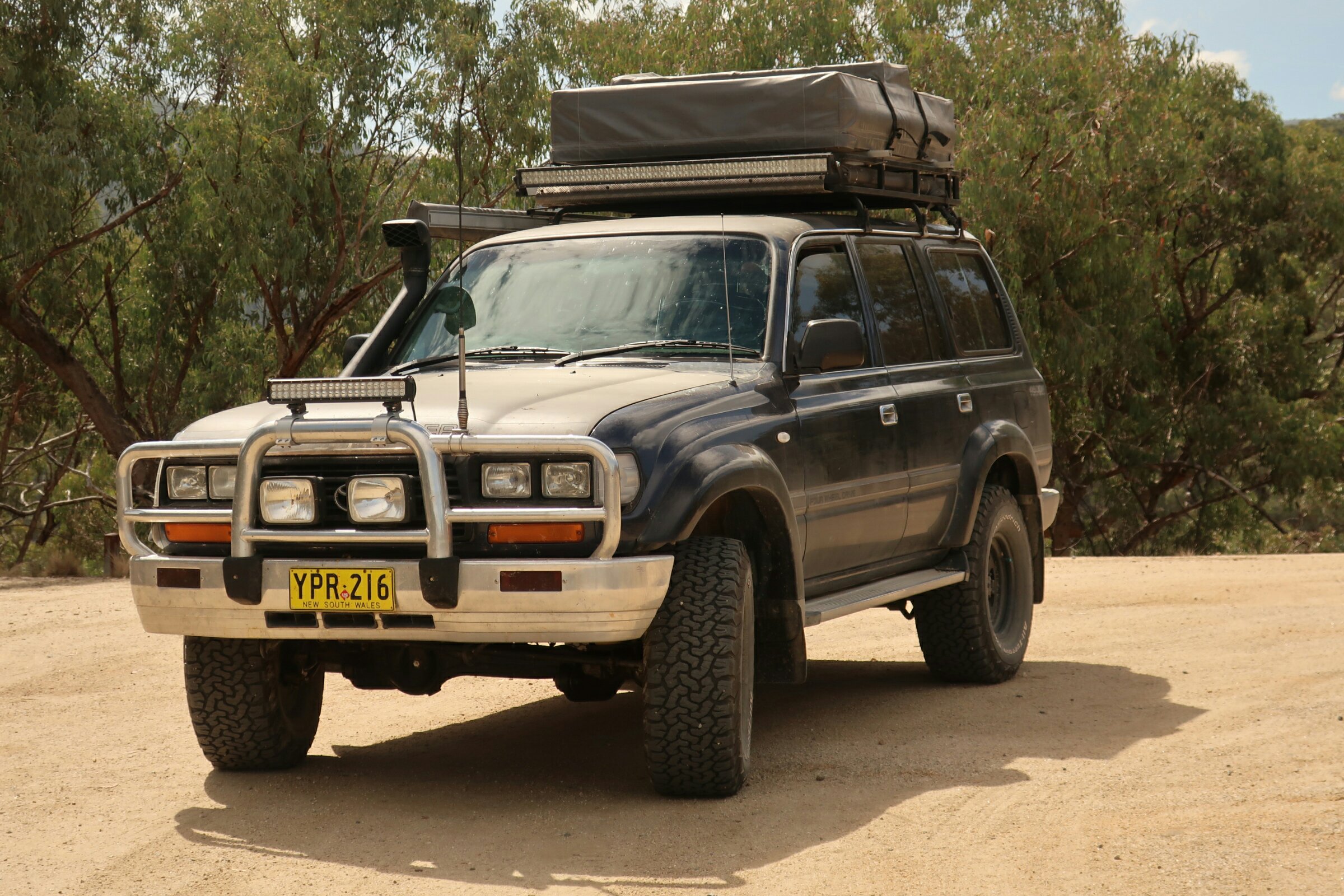 I got bored waiting…

But it appears that Stuart had similar ideas only he felt like being more creative. 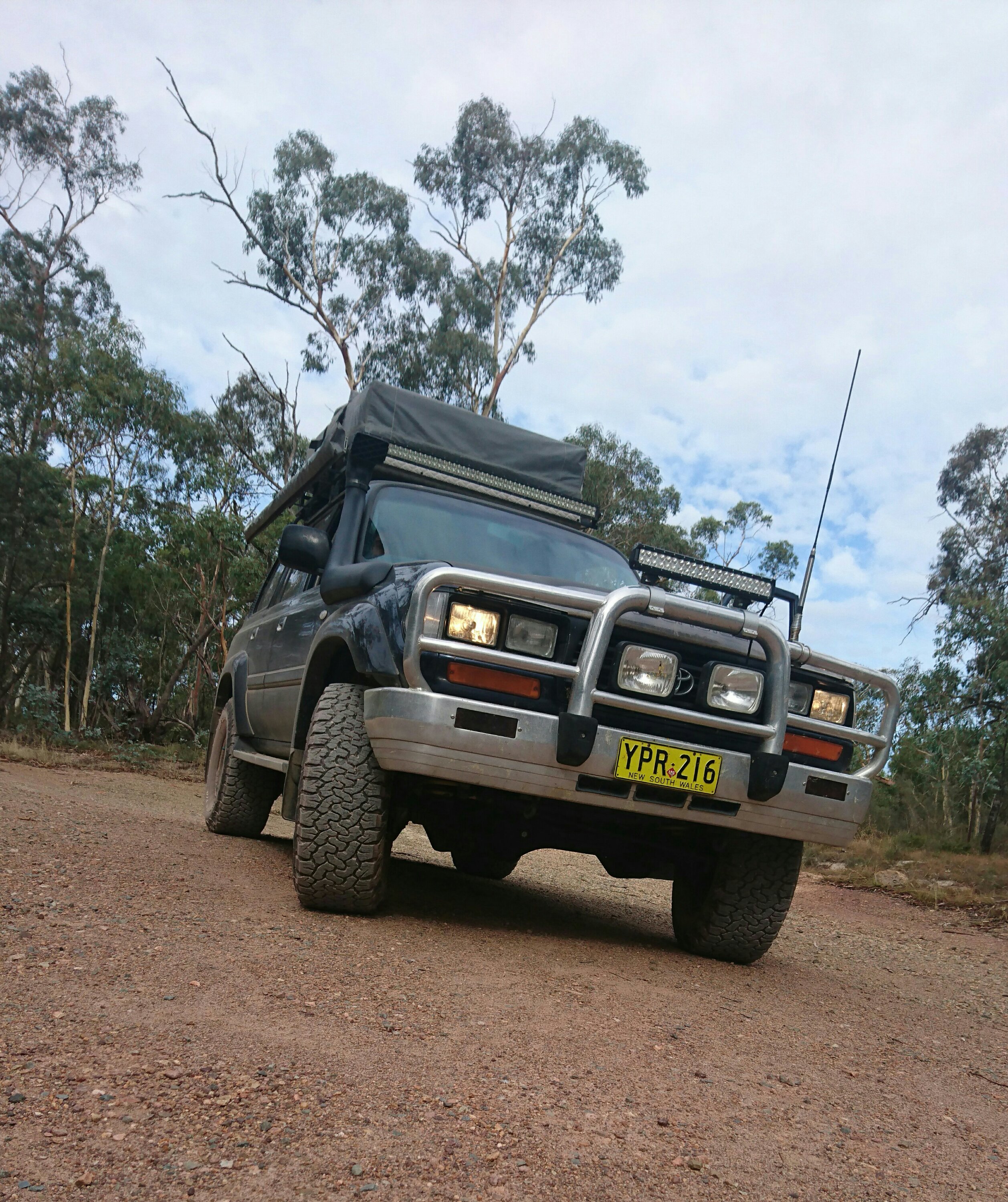 After that, it was glimpses of views and stopping on bends to have a good look. 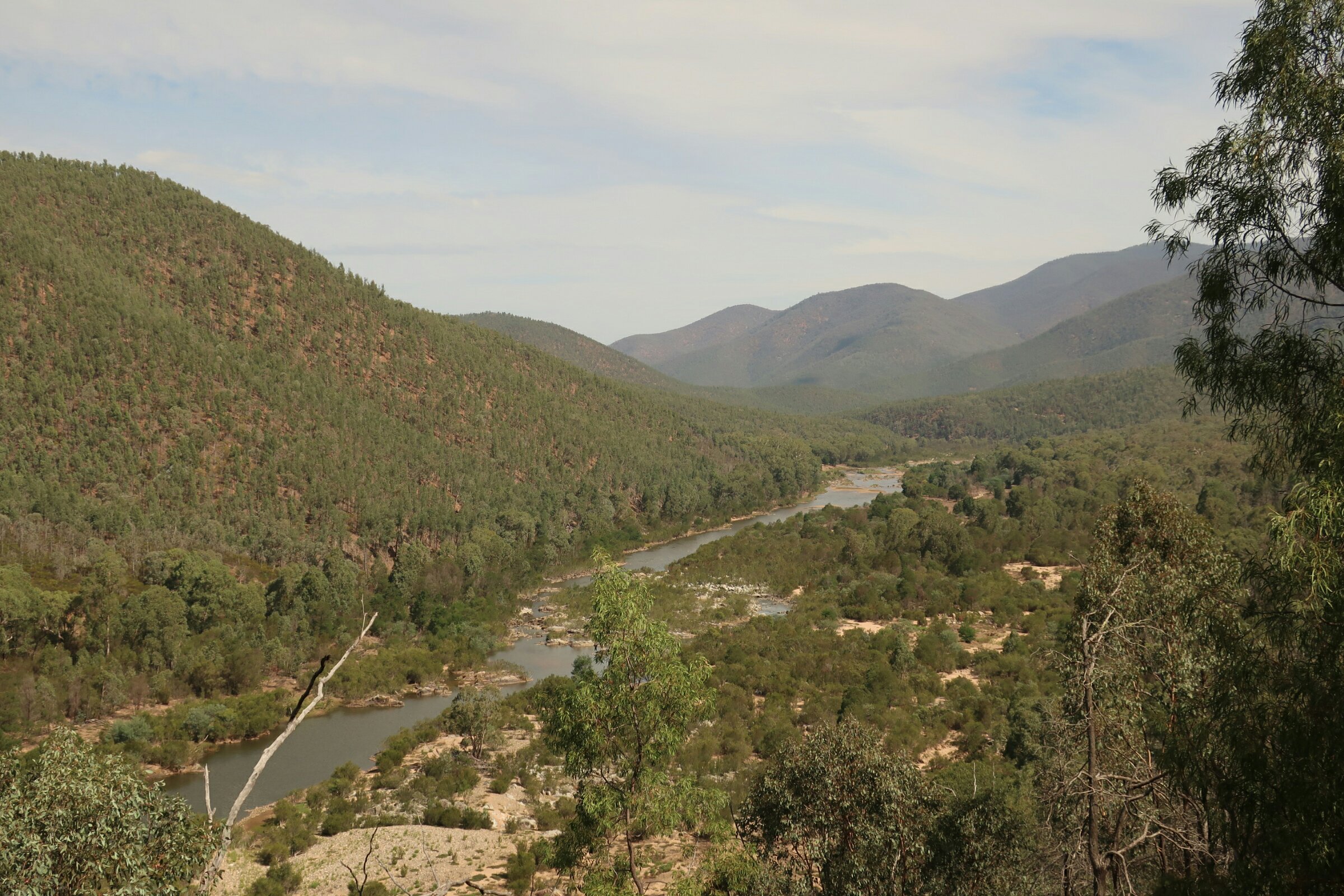 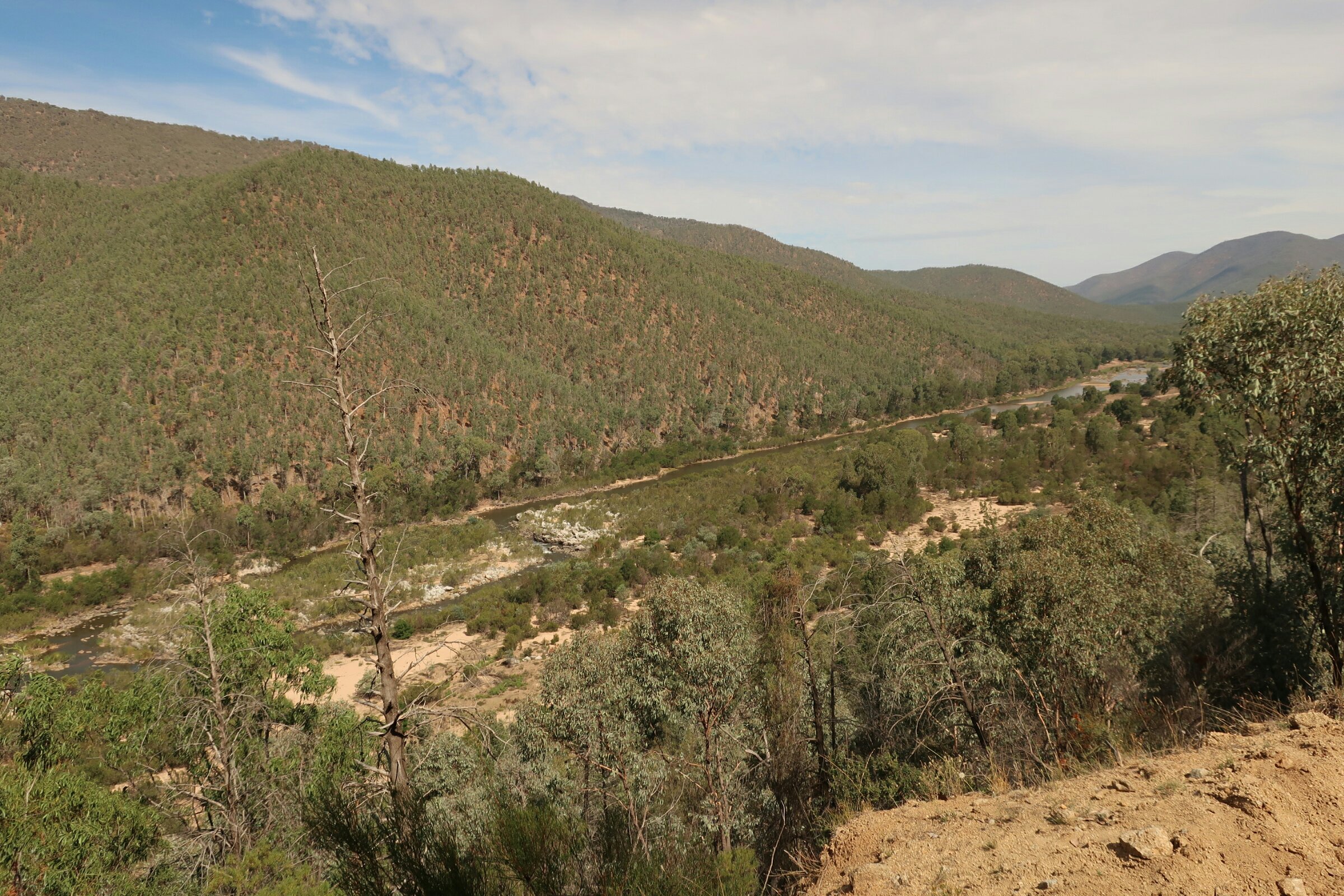 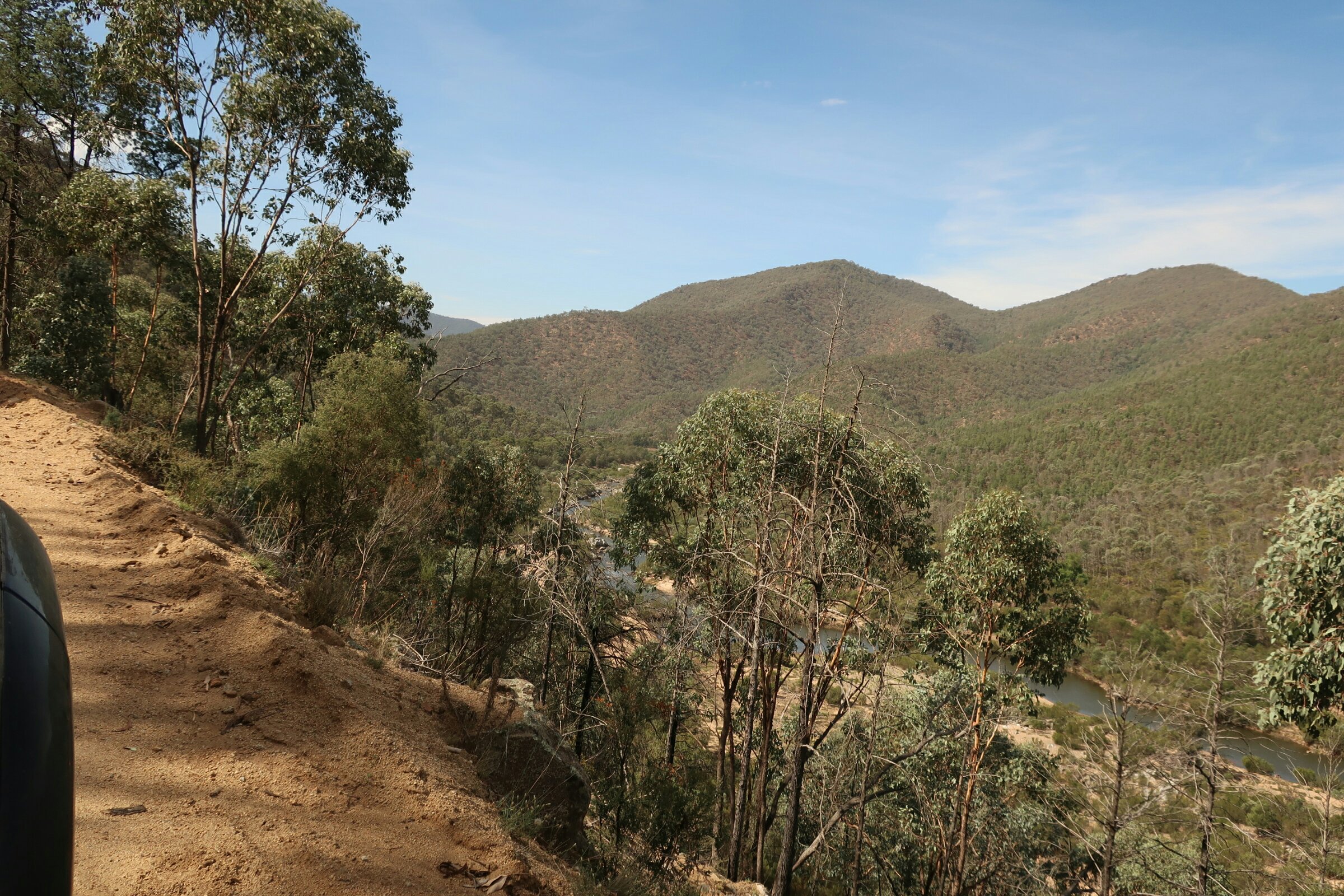 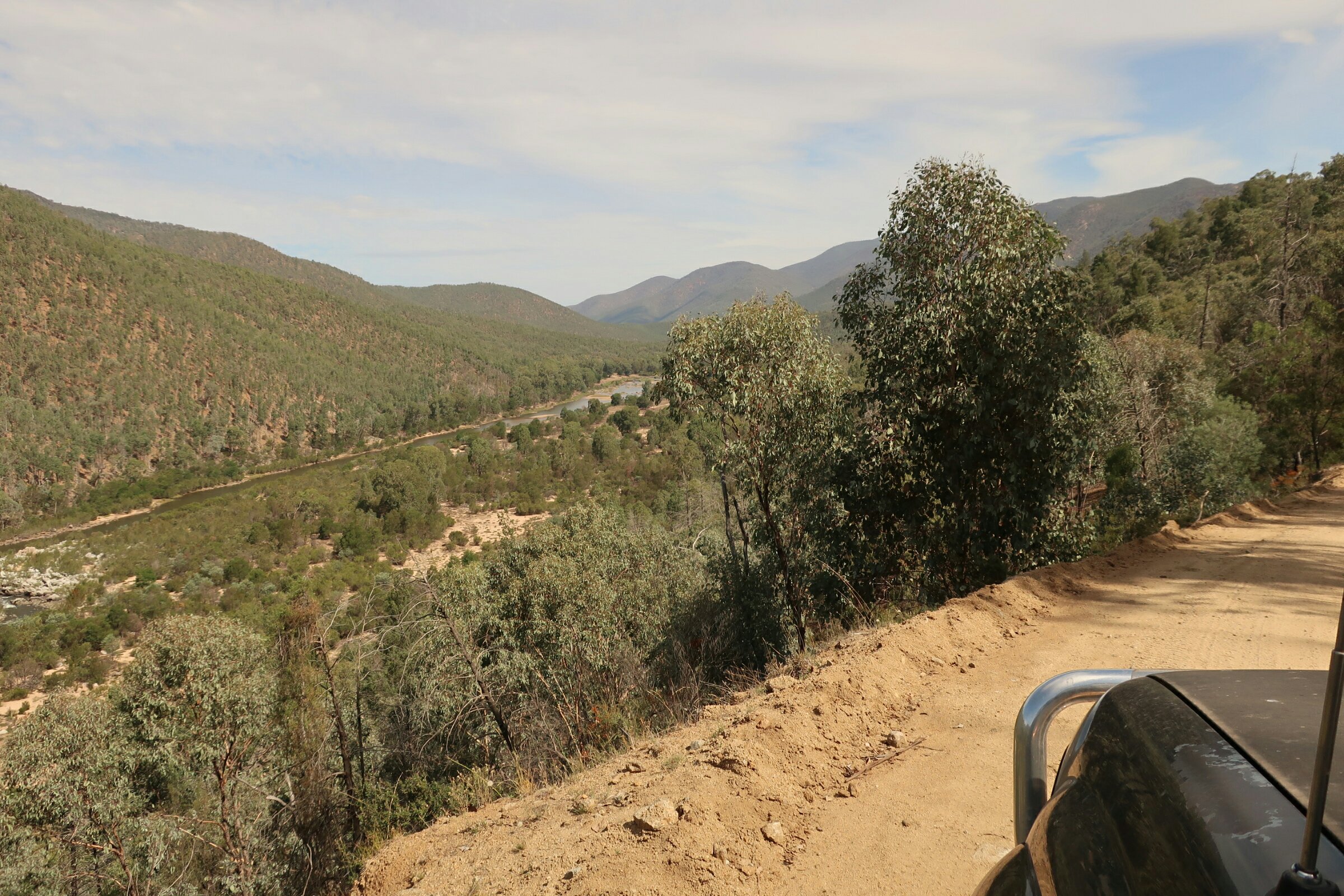 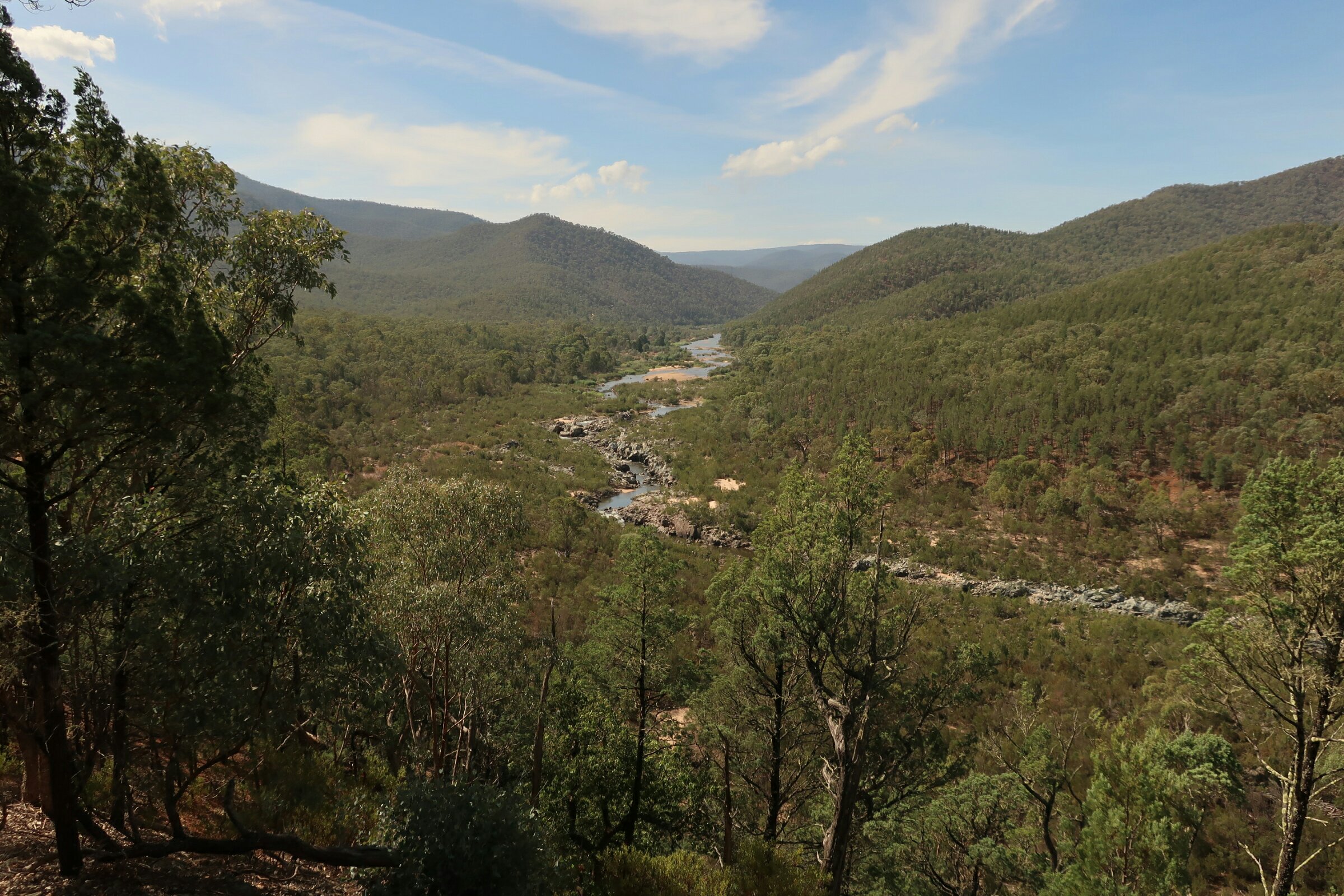 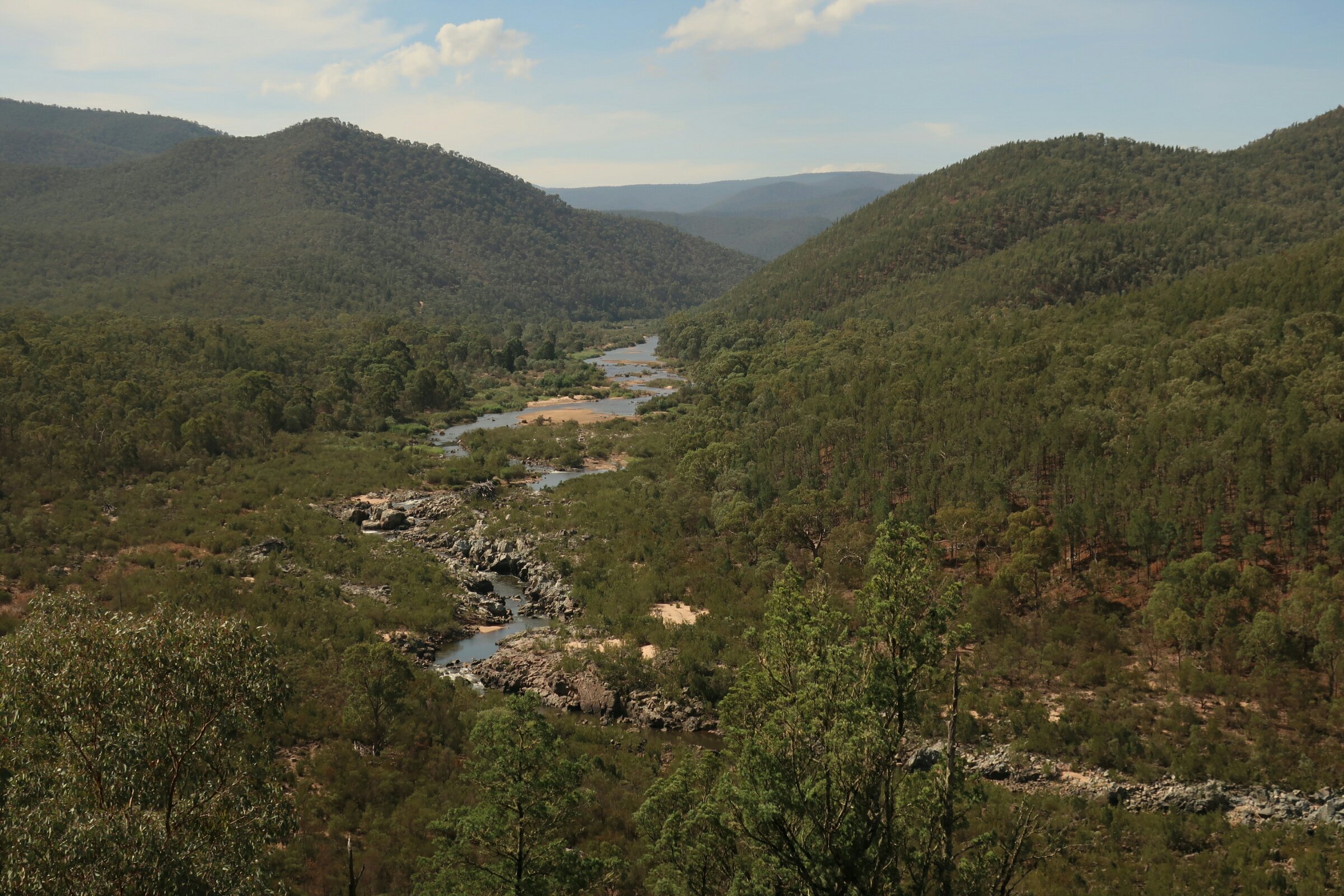 It was actually a great road to drive even if the info sign saying that the next fuel was in 160km was a good reminder of what you were getting yourself into. Somewhere along the way life changed to Victoria from NSW. Nothing much changed of course.