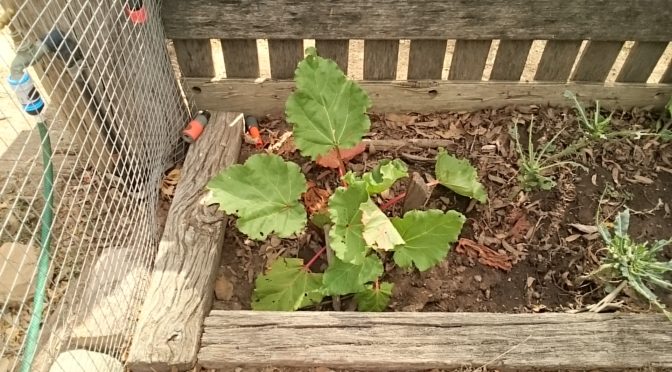 I’ve been asked for a link to my cooking forum.  I guess there is no harm in putting it here as well.  The cooking forum is called CookingBites and it still in its infancy.  It’s a quiet site but there are a series of regulars who enjoy it, so it keeps going for them and in the hope that one day it will get to be a touch busier!  It is always in the need of more members however!

We have been told that the fire season is now over.  Finger’s crossed.  We have had some rain since I last posted and the place is starting to go green again.  The bamboo has unfurled its leaves and they are now going green; the same applies to the Eucalyptus.

We have harvested some squash from the veg plot mostly in an attempt to ensure we actually got to eat it rather than provide the possum with a food supply!  Luckily it does not seem to like courgette or marrow for some reason, so that single plant by the laundry room door that has been producing excellent courgettes and the occasional marrow (cough) has remained unplundered by them.  Even the chooks don’t seem to like pecking at the courgettes which suits me fine.

They were however, just at the point of eating the leaves, but the rain has now produced green shoots of grass and they are going for the sweeter stuff.  I am however, still having to supplement their feed with cauliflower leaves and kale.  The only green produce in my garden that isn’t spinach that they can have (they can’t have spinach due to the iron in the leaves I think!)

I did weigh both the remains of the Kabocha Squash and the (whole)Butternut Squash when I harvested them and the Kabocha squash weighed in at 1.1kg after the possums helped themselves and the Butternut squash at a respectable 2kg!  I can think of a few nice recipes that may follow once the daytime temperatures cool off a touch!

I should I guess, introduce you to the rest of the veg plot, as it has progressed over the summer months.  The mint has enjoyed its sink and prospered.  There are both peppermint and standard garden mint in there, honest. As you can see it is a healthy combination! As you can see in the top of the picture above, the lawn is a little on the non-existent side.  The grass has long since given up and decided being green is not an option until there is a sufficient quantity of rain.

Our Rhubarb is going to be rehomed.  I had hoped that this site would be OK for it.  Well, it is OK, it is just not great… and so it will be replanted during Autumn to a new location that gets much more water, even when it hasn’t rained for a while because the condensation drips off the roof and collects where I intend to plant both the rhubarb and something else, I can’t quite remember right now! As you can see the kale is going to need to be in a caged area of the veg plot next year.  At present, such an environment doesn’t exist.  The leeks on the other hand, don’t need a caged area, just more water, and the squashes, well they just needed more space! The lemongrass, that was what was going to be planted with the rhubarb. In fact, I can actually harvest lemongrass stalks now which is great.  I don’t think I have actually seen lemongrass grown in the UK, but it literally is a grass!  Daft as it had never occurred to me that it was.

Next come the remains of the Lebanese Aubergines which are favoured here in Australia.  Sadly something else in the garden rather likes them, so I haven’t had as many as I had hoped for, but I have had a couple of handfuls I guess… Curiously, the planting instructions for the leeks actually stated to plant them only 10cm (4 inches!) apart and the rows only 15cm (6 inches apart).  I ignored that and planted them further away from each other, but as it seems, not far enough away from each other.  Next year will be different. The runner beans have been having a tough time of it until now.  They don’t like very hot, dry weather and despite loads and loads of flowers, they have not set fruit until now.  They are now, happily, making up for lost time and we have had our first full portion each from them which when I cut them, I thought was going to be all we got.  But since then, they have taken off and the beans are forming everywhere.  I can see before long that the freezer is going to be called on!

That doesn’t quite round up the veg & herbs in the place.  There are one or two plants that are elsewhere.  Either too high up for the chooks, or the chooks have been told off, yelled at or squirted with water so often now that they leave them alone.

One of the Eucalyptus tree trunk sections planted out with herbs (Oregano and Thyme).  I have hollowed these out significantly to hold much more soil but they still dry out desperately despite being lined with a black plastic bag!

Some parsley which the chooks mostly leave alone, there is a rosemary bush behind it (a curious variety that doesn’t grow particular large, but has excellent flavour)

I think the chooks must have planted this sunflower.  I certainly didn’t.

I’ll have to carry on with the update on Saturday, because the laptop is complaining that it needs feeding… or at least its battery does.  Now provided that it does not raid the veg plot….