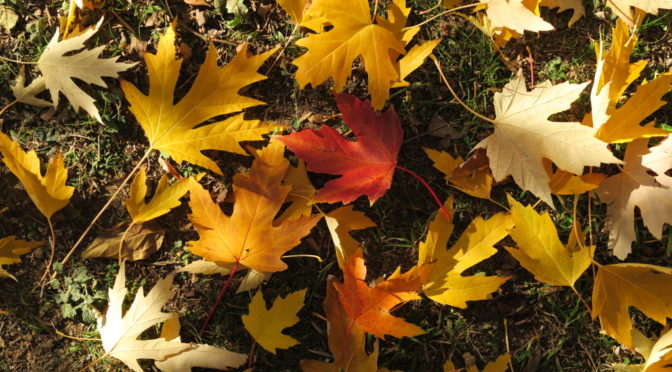 I’m sitting here looking out of the window.  It’s nearly 8am.  The sun hasn’t yet got to the house, but it has made it to the chook house.  It has been cold again overnight.  The kind of cold you know about.  It’s white (again) outside despite the blue skies and sunshine.  It was around the -3°C to -4°C mark yet again last night.  Not as cold as Monday night (we lost the water again), but I’ve learnt to gauge the outside temperature by how far up the fields the hoar frost comes and today it has come all the way up and passed the house, but it didn’t make it all the way up to the veranda and the pond only has a very light layer of ice on it.  Still it was cold and the tap water told us about it.  Mind you so did the laundry room floor, air temp, the toilet room, the bedroom… you get the idea.  The only place lovely and snug outside of the bed, was the sitting room.

Winter didn’t officially start until a few days ago, but Autumn finished with a series of wonderful sunsets and sunrises, a spell of foggy and then cold to very cold weather and some fantastic colours outside despite most of the place being Eucalyptus which is evergreen!  That is after a short spell of this.

Not a day to be doing the washing!
The chook house has had to have its moat redug. 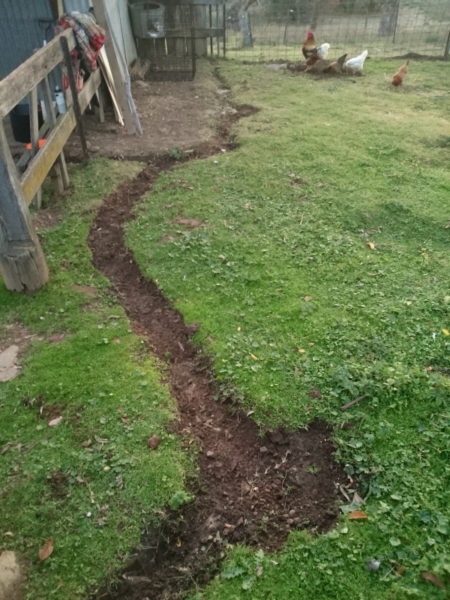 Inside the chook house, the inner enclosure also needed the ‘trench’ redug.

The floor level has been dropped on the other side of the roof which handily comes without guttering.  The far end which wasn’t draining has been dug out and filled with rocks.  I did the same last winter, but it has needed to be repeated.  Hopefully this time it will last a tad longer.

We then had a spell of bright sunny days,

some foggy sunrises and the first real frosts…

… the sunsets also started to get really nice as well…

along with some nice sunsets.

One sunset said fire to me very loudly and a quick check on the Fires Near Me site confirmed this.  The following day the main highway (The Kings Highway) was closed when the cold foggy morning compressed the smoke from the fire (a controlled burn that wasn’t as well controlled as hoped for) down onto the ground after way too many accidents.  Luckily because Stuart likes to get out before the main rush, he got through before the road was closed, but he said conditions were not good at all.

The Autumn colours came and went in a couple of days in our garden but I was able to photograph some on the road as well….

In our veg plot, we had this wonderful golden tree for a few days, then masses of fallen leaves.  At least the chooks are having fun now that I have moved them into their enclosure.

I took a few photographs of the maple (?) that also grows in the veg plot area.  It only went gold this year, with the odd leaf being red but the leaves on the ground were marvellous.

The days have steadily grown colder and another cold start to the day….

…and a chilly morning to be without any water (or my personal hot water bottle for that matter – how does he know?  He always manages to be away from home when something like this happens).

But the views remain great.

A timely reminder to check before you charge off the veranda.  I can now finally tell the difference between a wallaby and a ‘roo.

I was to spend the remains of the day digging holes in the garden to try to find an exposed water pipe, so that I could bury it again.  To quote my facebook entry (yeah, I know…)

I have just spent the morning digging to find an exposed pipe so that I could bury it again.

I believe I may have accidentally buried my sense of humour along with the pipe instead of my jobs list.

The irony of this situation is not lost on me, unlike my sense of humour which presumably won’t freeze overnight.

The pipe’s location is now marked with bamboo markers which will be swapped over to something more permanent shortly.  We will also be burying the pipe a touch deeper (it hasn’t frozen again, but we want to ensure that the wildlife around here doesn’t dig it back up).

Given that it is now 11:30am, I’ll continue tomorrow or Monday.  I have housework to get on with, cleaning to do, hoovering and chicks to tend to…. then a certain husband of mine should be home for lunch and hopefully with the supplies I need to carry on with the chook house repairs and renovations. Now that they have to spend much more time in the enclosure, we have had to make it more secure and also to provide them with areas for dust bathing, foraging, and ‘entertainment’.  I’m still working on the latter.  I’ll update you all on the chicks soon as well.  They have grown considerably and one or two of them definitely have personalities!