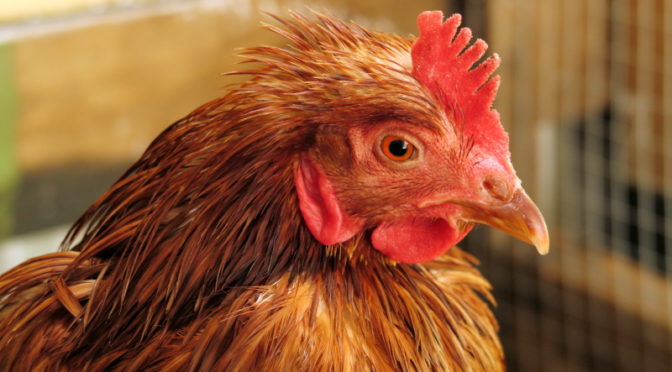 So last weekend, Vindictive Vicky had to have a new home. On Saturday morning she was taken to the rooster sanctuary we got HP from to be a , sorry, companion chook for another rooster.  She was struggling to adapt to the environment here and I had spend 6 weeks (of the 8 she was here) with her in solitary and her only being let out for a couple of hours each day.  I could not let her out at all until everyone who was laying that day, had lain.  And if I let her out for too long each day, her behaviour reverted to her old ‘attack every other chook’ mode which wasn’t around when she was only out for a couple of hours.  Whilst it was hard letting her go, it was good to see her adapt almost immediately to the new environment and hopefully come the weekend we will get an update on her progress and a few photos…

Sunday saw us collect to new hens.  These 2 came from a free range egg farm which was an eye opener.  We knew that the label free range often meant nothing more than daylight for something like 6 hours a day and access to scratch around in dirt (not necessarily a field) and larger farms are often worse than the smaller ones for this, but the birds (a friend had 5, we had 2) were in a poor state.  The field they were in was very crowded and there was a lot of infighting plus roosters were in the mix as well.  There were 3 caravans for them to lay in, and pine trees for shelter.  That was it really.

Arriving back here late in the afternoon, just before our evening meal, we didn’t really get chance to watch them settle into their new quarters or check them over.  But it was clear how dirty they were, the lack of feathers on one of them around the head and neck, the other has a claw missing from an old injury.  They are the standard ISA Brown which is what is generally used for mass egg production because they lay and lay and lay irrespective of their own health and to the detriment of their own health.  These 2 are no different.  They are 18 months old and were probably bred at the right time of year so as they didn’t moult last autumn (UK’s Spring).  This would mean that they would lay through Australia’s winter leaving them almost burnt out and unlikely to lay through the summer or for much longer.  It is also possible that these birds have problems within such a large flock…

Yesterday morning, I decided that there was only one way I could check out their health and look for injuries or other issues that needed attention (such as their backsides being filthy and covered in shit which is not good because it attracts flies which lay eggs and then maggot hatch and they burrow through the skin and eat the chicken alive from the inside out.  It’s called Fly Strike and it is a brutal way to die.  So it was bath time for the two newbies.

I went prepared.  Wearing dirty clothing and there was a load in the washing machine waiting to be washed and waiting for what I was wearing… I set myself up with a blue bucket, my shampoo (which being vegan is safe to use on them), a handy towel for me, a scrubber, a sponge just in case and a plastic ‘glass’ to use as a means to get pour water over them to get the shampoo out.  Their legs and feet were very dirty and may need the sponge or scrubber.

I caught the cleaner of the two of them figuring that it made sense to start with the easier and cleaner one.  I was using the same water.  She is the smaller of the two and the rather vocal one.  She is the skinnier and much lighter one.  And into the inner enclosure with the door closed we went.  After the initial WTF moment from her, she settled into the blue bowl and I knew instantly that the water wasn’t deep enough really.  I will know for next time.  She settled down and I poured water over her getting her as wet as possible.  I needed the crap on her backside and tail feathers to have a good soaking before it would come off.

It took a while, yet she stayed put throughout.  She seemed to be enjoying it.  Bathing her only got me slightly wet!  Holding her in a towel, I put her back with her ‘friend’ and waited for a while to make sure she was OK, before I started on the next one.

Next was to come the much dirty and larger of the two newbies.  She was easily caught and contained in the inner enclosure and again had the WTF moment when she was put into luke warm water.  She took a little more convincing that she was going to stay put and there was a moment or two when I got soaked… mind you so did she which is what I needed.  The crap on her backside and the feathers around there took much more work to get off and I wasn’t entirely successful getting it all off her legs.  I ended up taking her into the house, wrapped in a wet towel, to run another tub of warm water so we could have a second attempt at getting the crap off her.  Of particular concern was all of the crap around the base of her tail feathers which took repeated attempts to get off.  By this time she was just standing in the water of her own accord.  I didn’t actually need to hold onto her!  This was useful because two hands meant I could separate her tail feathers out and get to the base of them much more easily, but it was also risky with her being in the laundry sink!  She stayed put and seemed to be enjoying it.  I was almost done rinsing her with clean water when the phone went.  A quick towel grab, wrapping her in it and I was able to answer the phone.  It was Stuart.  Whilst I was talking to him on the phone, she sat wrapped in the towel on my knee, falling asleep in the warmth of the sunroom!  Of course the moment I got the camera out, I had moved and she woke up!

Then it was time to take her back down to the chook house and re-unite her with her ‘friend’.

Why Nameless? – we are still working out what to call her!

One thought on “Muscial Chooks”