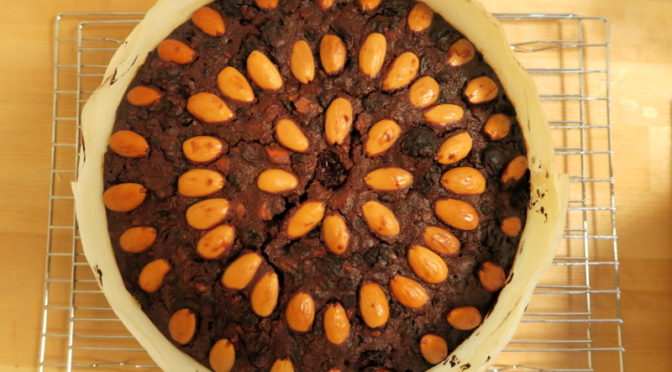 Yep, it has finally happened.  And next year it will most certainly happen much earlier in the year when it is cooler!  Having the oven on for 6 hours on a day when it reached 30°C was not a great move.   What am I talking about? 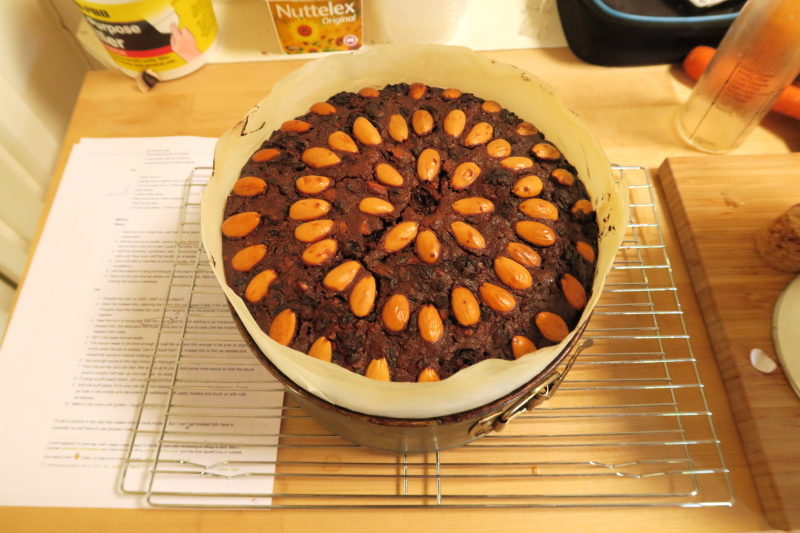 Yep – it has finally been made.  The epic has been done.

It started with a disaster. I started picking over the fruit ready to get it soaked only to discover that the fruit wasn’t very good and didn’t taste very nice.  The default supermarket fruit, the only option available, isn’t nice.  What happened to those Australia Sultanas?  Those Australia raisins?  I have no idea but they tasted the same and were not very nice.  They were sweet, pure sugar and no flavour.  And when it came to one of them, they were dry, mostly stones and horrible.  Even Stuart didn’t like them.  And so everything went on hold.  Stuart would have to get to the health food shop and get some decent organic ones for the cake.  There was no alternative.  It was off for the time being.

A week or so later and we had the new fruit.  The unsweetened apple juice was still OK, it turned out to have a good shelf life – worryingly so actually!  The new cooker was in and working, and I was ready to make the cake.

I started again, the night before, picking over the fruit.  I hate biting into fruit bake and getting a grape stone or worse still a stalk.  And so I spend several hours the night before I make the cake, picking over the raisins, sultanas and currents to ensure that as many stones and stalks are removed as possible.  Once all of that is done, the fruit is washed in boiling water to remove the wax that is added to make it shiny and often sweetness added as well, and when clean, I set it to soak in unsweetened apple juice.  Failing that, a dry cider works as well, but usually we don’t have to resort to that. 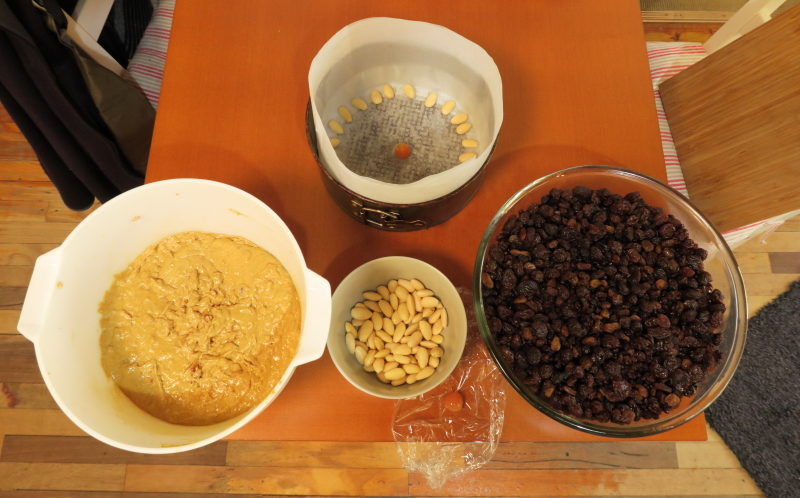 Once it has been soaked overnight (1L of juice is all that is needed), it gets drained and pressed dry.  I leave it with weights on it draining in a colander whilst I prepare everything else.  I have to start early – and here is no exception.  Stuart leaves for work at 7am, so I can get the fruit draining before he leaves, weigh out some of the ingredients whilst I am waiting for him before or after breakfast.  Anything to save time later on.

All of the dry ingredients are weighed out and put into one bowl.  The fruit is in another, the lemon rind, the juice, and 2 glace cherries in another.  Finally the marg and sugar is ready, as are the eggs.  For once they are not a concern.  I know exactly how fresh they are and exactly where they came from.  I even know what they chooks have eaten (more or less… they are free-range after all!)

I’ve just got to the point where I’m about to add the eggs to the creamed sugar mix.  I usually stop at this point and line the cake time.  Actually, normally it is done first, but the new oven takes less time to heat up, so I did it later in the sequence.  Only I didn’t.  I search the house high and low.  What do you mean we have no greaseproof paper?  Where can I have put it?  Of all the things to loose track of in the house move between continents I was expecting it to be the cake tin.  We have a set cake tin for this cake.

I can’t find the greaseproof paper and the only alternatives are not great.  I also only have olive, sunflower or rapeseed oil, no nut oils at all.  I’m stuffed.  I’m screwed.  I don’t have transport to get any and Stuart isn’t able to get any today, so I can’t even carry on tomorrow.  Stuart and I talked through the alternatives ranging from the ridiculous (A4 printer paper) to more viable options if and only if we had had a nut oil available (that alternative was a t-towel or old pillow case btw).  But that lack of nut oil was the killer.  We have tried olive oil, sunflower and canola (rapeseed) oil in the past and it just does not work.  The cake is best done with a nut oil so that the taste is masked buy the flavours in there and alkons oil is the best option available.

I reluctantly put all the dry ingredients into a bowl and converted it with clingfilm.   The two reserved glacé cherries (also now washed and the rest chopped and in with the fruit) went into the lemon juice and rind (note to self for future knowledge, cherries go pink when soaked in lemon juice!) and they too were converted and put into the fridge.   The fruit had the drained juice poured back over it and into the fridge it also went, covered with clingfilm.

Just getting to this point had been hard enough.  Some of the ingredients are not available in Australia.  Others I had to ask Stuart to try again with.  For instance, molasses and blackstrap molasses are not the same thing.  Usually they would be interchangeable, but only in one direction.  Blackstrap molasses is nowhere near as sweet as molasses and much nicer and over the years we have been making this cake, we have found that it is much nicer with blackstrap molasses.  Mixed chopped nuts and roasted chopped nuts (any variety) are also not available, so I had to make my own.  And as for our dried sour cherries, the really nice ones from Sainsbury’s, we couldn’t even find a semi sensible priced alternative, so they were omitted completely.

And so the creamed sugar was destined for another round of oat biscuits…  It was all on hold yet again.

Finally everything is ready.  I’ve lined the cake tin, actually I always double line it.  I don’t know why, but I always have with this cake.  I’ve creamed a new batch of vegan margarine and sugar and we are ready to go.  I have everything don’t I?  Yes, phew.  This time I really can make it. And luckily everything went to plan with the sole exception of the oven and what gas mark 1 should actually be.  It’s most definitely not 110°C.  It should be 140°C and over 5 hours that adds up…

Now I don’t like marzipan and Stuart doesn’t like icing sugar, so we decorate our cake  Dundee cake style, top and bottom so there are no arguments…

Some time later, one very hot Emma has a cake ready to cool and be wrapped for Christmas.

Next task is a Christmas pudding or two!

3 thoughts on “I finally found time…”