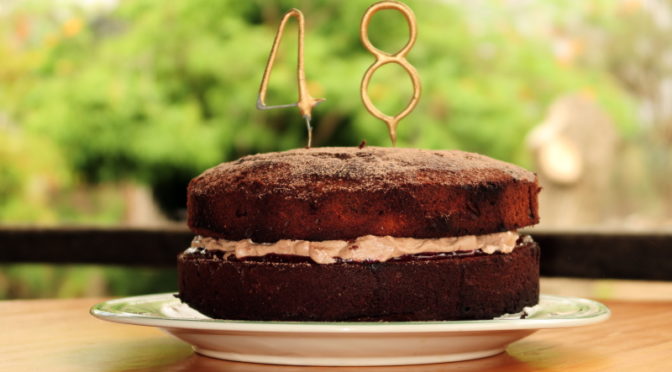 So far, so good.  But that was were it was to end, with Stuart’s birthday sadly.

On the Tuesday night, I had fed the new chicks (OK I haven’t mentioned them or the adults I was given about 3 weeks earlier but I’ll introduce you to them sooner or later…) as normal, about an hour before dusk.  Everyone had been OK.  I say OK because I had been having reservations about the one that is blind in one eye, for some time.  I had concerns that what I was seeing wasn’t actually right.  It’s hard to explain but the friend she had come from had told me that the eye had been like that from the start.  But it still didn’t feel, well it didn’t sit well with me.  Something was amiss and I was already toying with taking her to the vets to get a second opinion on how to care for her and her eye.  She had come to me because I have different feed to my friend and the feed I have seemed more suitable to her needs than that that my friend has (mine is an unmedicated chick starter).  My friend breeds chickens so an unmedicated chick starter feed is not an option especially with the fact that the medication in the chick starter treats something that is prevalent in her area.  Here it is non-existent.

Anyhow, on the Tuesday evening, I had gone into feed the chicks as normal and everything was fine.  An hour later when I went to check on them and lock up for the evening, putting away their food overnight (mice issues) etc, one of them couldn’t hold its head up and was unable to stand at all.  Somehow nature always seems to choose the nicest ones.  This one was a friend of the one with only 1 eye, and was with her most of the time, she was also exceptionally friendly.  She was clearly very ill and there was a choice of 2 conditions.  The first was wry neck – that is a treatable condition provided it is caught and treated very quickly, but it takes time to recover from even when caught early.  But you see a start in the recovery pretty quickly.  It is also caused by a mineral deficiency (at least that is what is believed it is at present) and basically the chicken has a diet issue.  This was a possibility because the chick concerned, a lovely Black Langshan cross was very thin and had recently had a pretty major change in its diet moving across to us.  She, along with Fred, the one who is blind in on eye, were the bottom of the pecking order so last to feed, but there was always feed out in the hanging feeders and I had seen her feeding.  I brought her into the house and set about finding something with a high zinc content in it which is what is believed to treat wry neck.

But at the back of my mind was another possibility. The second option is something called Marek’s disease.  This is what Wikipedia says about it

Classical Marek’s disease or neurolymphomatosis causes asymmetric paralysis of one or more limbs. With vagus nerve involvement, difficulty breathing or dilation of the crop may occur. Besides lesions in the peripheral nerves, there are frequently lymphomatous infiltration/tumours in the skin, skeletal muscle, visceral organs. Organs that are commonly affected include the ovary, spleen, liver, kidneys, lungs, heart, proventriculus and adrenals.

There is a vaccine, but it has to be done when the chicks are 1 day old and it can’t be later than that…. It’s also not a preventative.  It, similar to the flu vaccinations, only hopes to give you a better chance of your body recognising the virus and being able to fight it off… Marek’s is 99.9% fatal and highly contagious via inhalation from feather dust (dander).  She will have been infected with the virus more than 10 weeks prior to me getting her.  Symptom appear internally initially.  But obviously with a chick not being able to talk, you have to wait until the first visual symptoms occur at +10 weeks after exposure.  She was still in isolation, but with all of the other newcomers.  Sadly this means that the others will have been exposed to the virus.  Any that were thin and underweight may still die from it further down the line.  And there is nothing I can do about that, but accept it.  All I can do, is what I had already been doing, ensuring that the quarantine area is maintained and that everything out of there is considered to be contaminated and disposed of at the tip rather than entering into our compost system.

So both chicks needed medical attention and Stuart rang the vets first thing that morning (on his birthday!) and made the appointments.  It terminated all plans for that day, his birthday but he understood (Oh and mum, as at 31st March, Stuart’s birthday card still hasn’t arrived 🙁 ).

At 3pm that day, we took them to the vets.  We did Fred first.  Fred had been named Ed previously, but we decided we wanted her to be called Fred (after Winifred “Fred” Burkle from the TV series Angel).  Her eye turned out to have a chronic infection and in chickens, puss is harder in their eyes and forms a solid lump over the eye rather than seeping out.  What we had actually been seeing was a solid lump of infected puss.  With an extra pair of hands, a firm grip and some pressing, the lump popped out of its own accord when the vet applied pressure.  It came as a surprise to all of us as to how big the lump was and that there was a partially formed eye behind it as well.

Putting Fred aside to let her recover, we got the other chick out.  We both knew immediately from the look on the vets face that there was no way that chick stood a chance.  Stuart said later he knew the chick wasn’t leaving alive.  I had always suspected the worst.  What’s the saying? “Hope for the best, plan for the worst”.  I made the decision there and then.  The chick had been showing the symptoms for well over 18 hours now and had not improved at all.  I had been surprised that she had survived the night to be honest.  But getting food into her had been exceptionally difficult and I had been hand feeding her individual sunflower seeds in an attempt to get anything into her and even then I had had to force them into her.  She wasn’t good and I knew it.

There really was only one option and when the vet started to explain, I just piped up with the name of the disease.  He realised immediately I knew.  I left her there to be put down.  My friend obviously needed to be told as well but even before I had told her, she had told me that she had just seen her first case in a chick that a neighbour had brought to her that very day…  All I can do now, is to monitor the situation.  It usually only affects chicks up to the point of them starting to lay.  After that, my vet tells me, you are much less likely to see it.  It’s as the most strain is put on their bodies that they develop the outward signs of the disease – that is the paralysis in most cases.  The problem is that the virus can live in the feather dust for over 15 months!

All I can do is hope that I have minimised the risk to the rest of the flock with the precautions I had taken with the quarantine zone, including the use of overalls, nitrile gloves, a change of footwear and that footwear having bin liners (replaced daily) over them as well.  I also didn’t handle the birds during that period other than showing there where to roost!  All droppings and bedding material was treated as contaminated and bagged and taken to the tip.  Fingers crossed.

So how is Fred doing?  Well brilliantly so far.  There has been no more puss in her eye, no more build up of crud/crustiness and she has continued to grow.  She’s putting on weight (she was 800g according to the vet – hatched on the 17th November) and she’s looking good.  She is undoubtedly blind in that eye because it has not formed correctly and now hangs out with 2 other brown chicks.  One is almost identical to her and the other a similar size but totally different breed/cross.  So they will be kept to be her companions.  You can’t put chicks into an existing flock by themselves.  They have to go in pairs at least to prevent the worst of the bullying and also so that they have ‘someone’ of the same age because of the way flock dynamics work.  It’s that darn pecking order and school ground bullying at play.

So what else happened that day?  Well we had the day at home, obviously.  I had made Stuart a chocolate birthday cake which there is a photo of somewhere….  Various people contacted Stuart that evening to wish him a happy birthday but otherwise it wasn’t, sadly, the best of days or birthdays.

The cake is totally dairy free.  The filling was coconut cream (no taste of coconut!) and jam.  I came across an interesting recipe to create a dairy free whipping cream from canned coconut milk.  You have to be careful which one you purchase because you are looking for ones with as few ingredients as possible and has high a coconut milk percentage as possible, (so mostly the organic ones) and then you add oil to what you have…. well almost.  I had to adlib a touch but once I had added a touch of maple syrup (I didn’t have icing sugar otherwise I would have used that ) and a little cocoa powder it was surprisingly good.  Even Stuart agreed and came back for more! 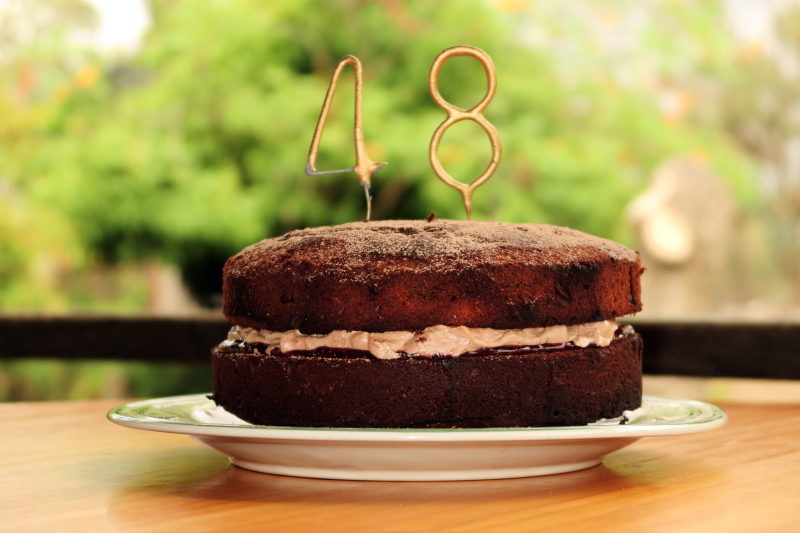 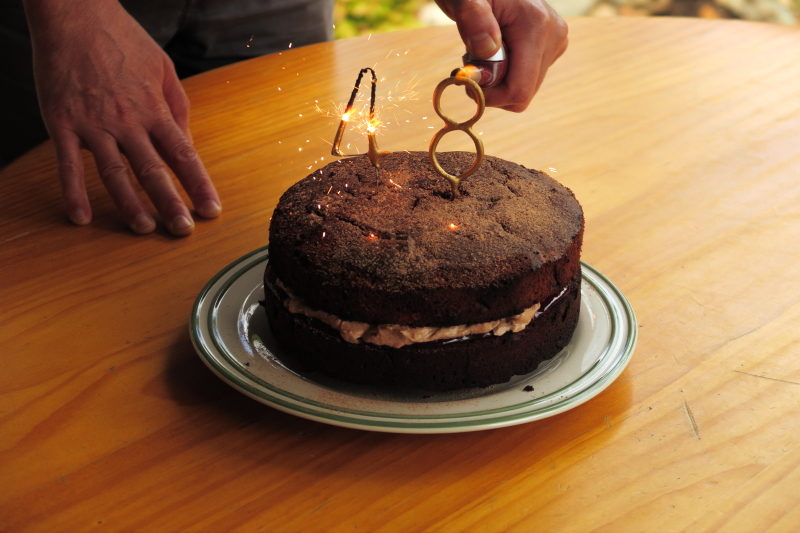 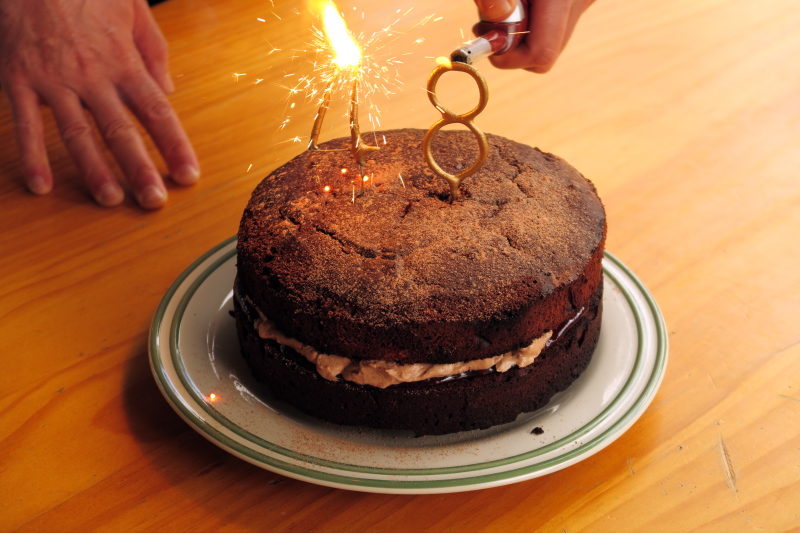 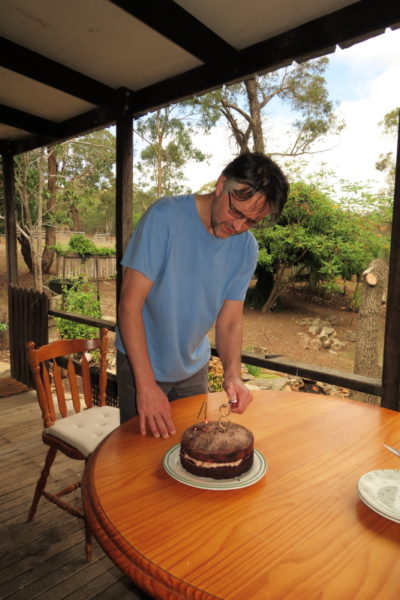 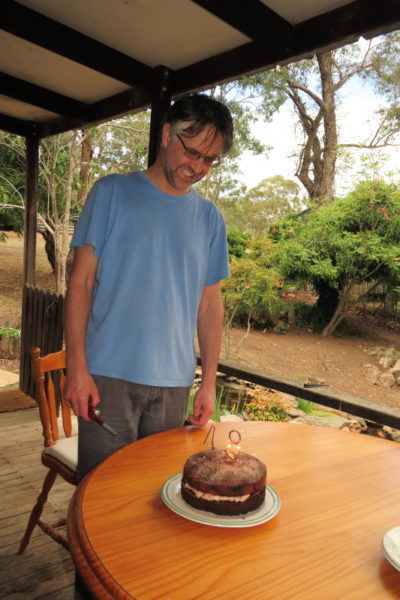 I had been singing Happy Birthday to Stuart whilst he lit the cake, but as you can see, it took a lot of concentration and I was beginning to flag by the time he actually had both ‘candles’ lit.  Not that he managed to get them lit at the same time…  I had thought sparklers would be safer than 48 candles; now I am not so sure!