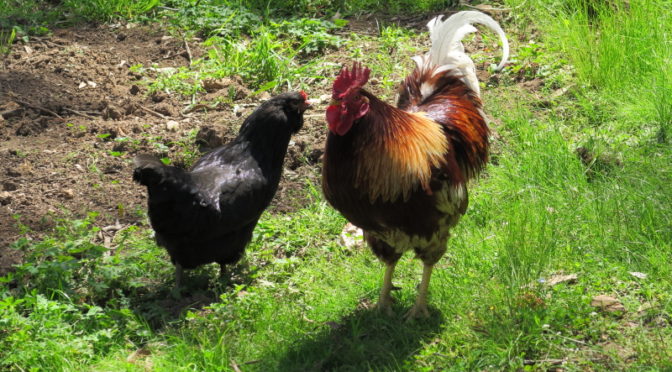 Meet Hercule Poirot.  We did consider very briefly Guy because he reminds us of a certain chocolate… Guylian Belgian Seashells and you have to know me and my chocolate addiction to understand that one, but I didn’t want Guy and wanted Gorgeous Guylian, but Stuart didn’t.  So we had a rethink.  We couldn’t really keep him as Ian even if the spelling is different (Stuart’s brother is Iain) so thinking caps on and somehow Stuart came up with Poirot.  I decided to include the Hercule and we now have HP for short.

We kept them in the outer enclosure for a couple of hours until all the grain on the ground had been rather eagerly consumed by HP and then opened the gate.  The chooks scarpered very quickly.  HP took a while longer, ran a long way off worrying me slightly and then called out to find the girls.  He is now following them around very carefully and every now and again crows though sometimes it sounds like someone has a plastic bag on his head already!

VV is behaving, JJ2 tried a tussle with him and very quickly realised it was a mistake.  CC has found someone her size, JJ is very curious and rather like a 10 year old around an adult she admires, and HH rather like a teenager, besotted and already, well I probably don’t need to say.

It is a case of watch this space.  Hopefully this will resolve the issues with VV and life will return to a somewhat less violent place with her having her freedom.  Currently she is out with them all, but keeping her distance from the rest of the flock.  Has she been cast out?