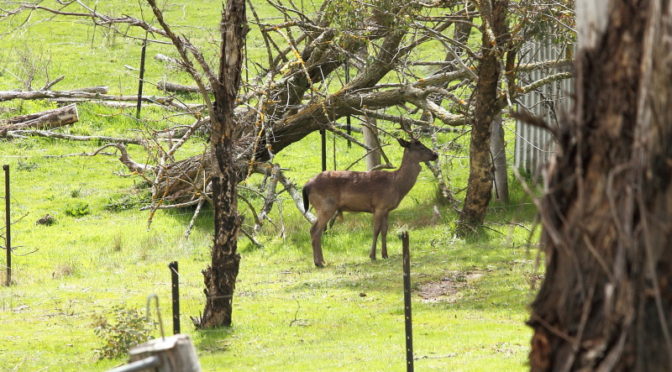 We have had a week of frosts at night and warm weather during the day.  It has actually got to the point now where hats are needed, sun cream is needed and I am having to stay out of the sun at certain times of the day.  Luckily there is always somewhere in the shade in the garden so that is great news from a gardening point of view and things are now starting to grow.  My most of my seeds are now seedlings and I can now see peas that have finally germinated.  I have dug through another bed, this one by the laundry room door which much to the disgust of the chooks featured very little for them to eat.  Into that bed, which is unfenced and outside of the veg plot area, went the ‘spare’ onions, ‘spare’ bronze fennel and some more garlic bulbs.  Hopefully nothing in the way of local wildlife will actually like any of that.  Certainly the chooks don’t which is good news and I should get away without having to fence it in.

The chooks continue to entertain me no end chasing me around the garden and generally getting in the way.  Luckily the garden is ‘rough and ready’ aka gone wild through a lack of maintenance, so their devotion to eating insects or anything that moves isn’t going to harm the population and may actually improve matters for us.  It also won’t have and so far hasn’t had any impact of the general tidiness or content of the garden.  It seems that other than wood sorrel, potentially clover and another weed that is as of yet unidentified, they don’t actually like anything other than the occasional touch of grass.  So the lobelia, petunias, lavender and a few other things that have gone in remain untouched.

So far this week we have had 21 eggs from them and we have another day to go yet.  I never expected this many eggs from birds as old as they are and one of the birds is not laying at all at the moment (due to her confinement because of problem behaviour).  Even CC, the 6 year old is laying most days which is great fun because if she is later laying her egg or out foraging/eating when JJ our youngest is laying she then tries to create her own nest in the sawdust under their roosting perches (I have taken to removing deposits every other day, so this is a whole lot cleaner than it sounds).  Once she has made this nest, she then goes wacky, totally wacky trying to cover herself frantically in camouflage material ranging from twigs to leaves to sawdust.  Apparently only a few hens do this, and why she has started to is anyone’s guess, but how exactly a few leaves or bits of sawdust are going to hide a 2.5kg chook is another of life’s mysteries.

So how is VV (Vindictive Vickie or Trouble as she has been nicknamed) getting on?  Well she isn’t really liking life in confinement, she never was going to and it was only ever going to be temporary.  She has started to quieten down, but only just and today after the other 4 birds had all lain, we have let her out into the garden with the rest of the flock.  It instantly split the flock again into their original 2 flocks, but they are now all standing under the conifer bush cleaning their feathers off.  However, she has a preference to remain by herself rather than integrate with the rest of the flock…  At least there are no food arguments or the likes, but tonight she goes back into her cage because we have taken the decision that we want to give her a second chance and the only way now we can do that, after a week of her in confinement and things only just starting to quieten down, and its not fair to her to keep her that way much longer (space requirements, food and foraging requirements, socialisation etc) is to adopt another chicken.  Only this one is going to put her in her place and stop all fights between the chooks.  We are adopting a rescue rooster named Ian.   We decided that between the frogs, the birds, the kookaburras and everything else, adding a rooster to the noises here at dawn and dusk (and most of the day and night) isn’t going to make that much difference.  And he needed a home, we need a solution to the issue with VV and don’t really want to split her from her ‘sister’ and another from the rescue (and the only one she can’t bully).  He is coming from a Sanctuary for Roosters.  He’s 18 months old and is going to be in heaven.  Provided that we always round up all the eggs, there won’t be an issue resulting in any unexpected additional numbers to the flock.

So a few other pictures of the wildlife around here.  We had been told that there were Red Deer in the area, but until now we had not seen any at all, or any signs of them.  Earlier in the week, that changed with this visitor to one of the lower paddocks.  The following day, Stuart saw two of them as they nearly ran into him whilst he was driving to work along our track. 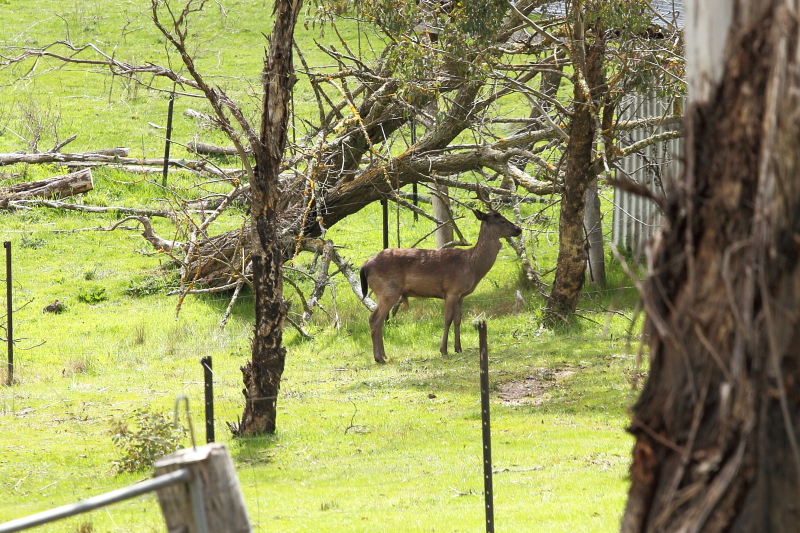 The White-Faced Heron that is probably nesting on the opposite side of the creek from us which actually has a worse call that the Sulphur Crested Cockatoos.

One of the cute and colourful birds that are nesting in a massive honey suckle near to the sun room window.  He frequently displays in the veg plot.  As you can see, he is tiny so getting any pictures of him is quite challenging through a window.  He (and they) are a noisy bunch however.