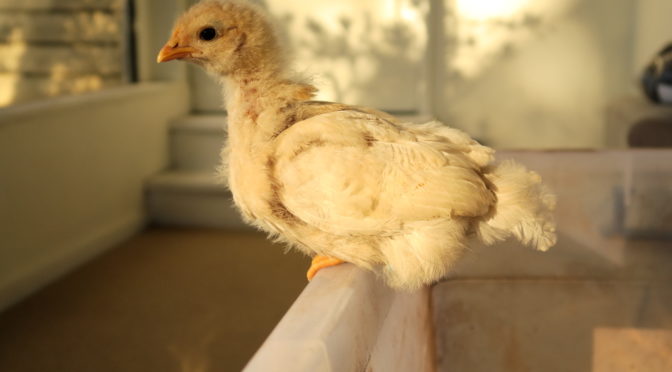 The chicks are still living in the sitting room and we still have to keep them warm at night.  Luckily they are hardier chicks than I suspect they are meant to be.  I haven’t really kept them at the kind of temperatures I am meant to (only vaguely close to) and I’ve not adverse to letting them get a touch chilly from time to time to help expose them to the colder temperatures they are going to have to get used to.  I think I now understand why people don’t hatch chicks out themselves in winter…  However, the upside has been that we have had an excuse to keep the house warmer and  the fire hasn’t been out in over 5 or 6 weeks now!

They have had to have a larger ‘cage’.  I use the quotes because the only thing we could come up with that was a sensible was a wardrobe.  An IKEA rejects for $50.  Then I attacked it with a jigsaw.  It took a couple of days, I have to pace myself and a couple of redesigns.  There are some changes I would make to it, some I made the moment the chicks were in and others, in hindsight, that would have helped matters.  But as things went, it gave them the space they needed and contained them. 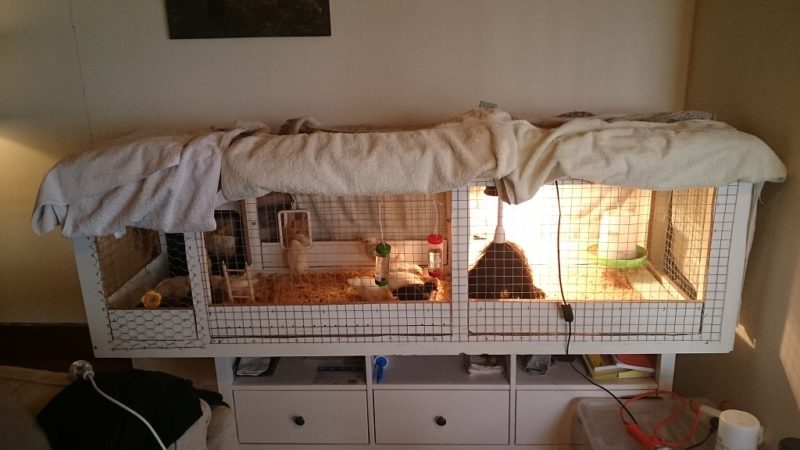 So, as you can see, it’s large.  There is even a chick in there looking at itself in the mirror!  At night I drop the covers (towels and a blanket) to help keep in the warmth.  That is holding the temperature at between 70-75F depending on how cold it is at night.  We have just the 9 of them and now that they are larger, that is more than enough in there.  I can’t imagine what I am going to be doing with them in a couple more weeks time.

Then there is the dust issue.  They have been trying to dust bath since they were 5 days old, so it much be genetic.  I had read that their mother taught them, but I’m not convinced.  These chicks know how to get very dirty all by themselves.  They don’t need help on the matter and they are exceptionally good at raising a really good level of dust.  Sadly the dust hasn’t worked out that it is meant to stay in their container.  They have a dust bath container in the sun room.  OK the chicks seem to spend half their time outside of the container, sun bathing on the rim, but I can cope with that.

The ‘I can (just) balance on here in the sun if I try really hard’ pose.

Syd and the funky hair do.  There are a few more somewhere.  I’ll bale them out and tag them on here!

‘Excuse me, we are all at the ‘we are ever so sweet and distracting’ stage are we not?’  Or I’m just enjoying the sunshine.

Meet Penguin.  Yep, our only black chick and yes, it is really excited about that crumb of chick starter!  Penguin is a Black Langshan Cross.  We also have a sibling of Penguin’s who is blond, totally blond which for a Black Langshan cross is a little bit odd!

Yes – they really do sleep like this.  Even when provided with something to perch on and even at 4 weeks old, some of them still sleep in this pose!

I have found a way of totally distracting Stuart when he brings work home which is roughly every time he needs to ring the UK office.  I slowly start to give him chicks.  He has 3 there.  He didn’t think he could handle 3 of them.  So I started to put them on his shoulders as well.  I threatened to put one on his head… Actually I think it was one of the chicks have a poop that finally got him to put the call on hold, hand back all of the chicks and resume the call in the sunroom (which was freezing cold and dark!).

Without needing to be taught, they have worked out, like all children the world around have, how to get very dirty very quickly.  I had thought that they needed to be taught how to dust bathe, but apparently not.  I have had to ban them from it for a while though because we have a house inspection coming up and it is causing way too much dust in the house.  A 2 week’s layer of dust is arriving overnight at the moment and I can’t keep up with it.  So they are banned from dust bathing sadly.  The result is that I have had to wash several of them now in warm water in a washing up bowl on days that are hot, and then wrap them in towels and put them on a heat mat to get them dry because we don’t have a hair dryer and I don’t want them getting a chill which they could very easily do with them being so relatively small. 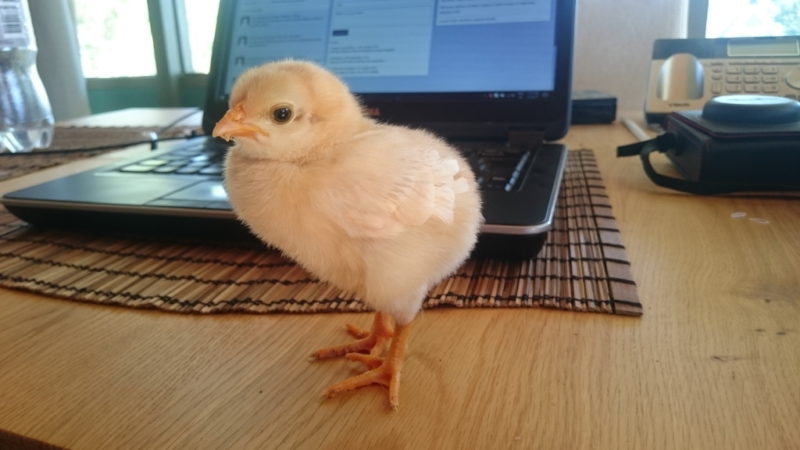 Part of the identity parade…. Have I done the ID parade yet?  Humm I will have to look back and see if I have. 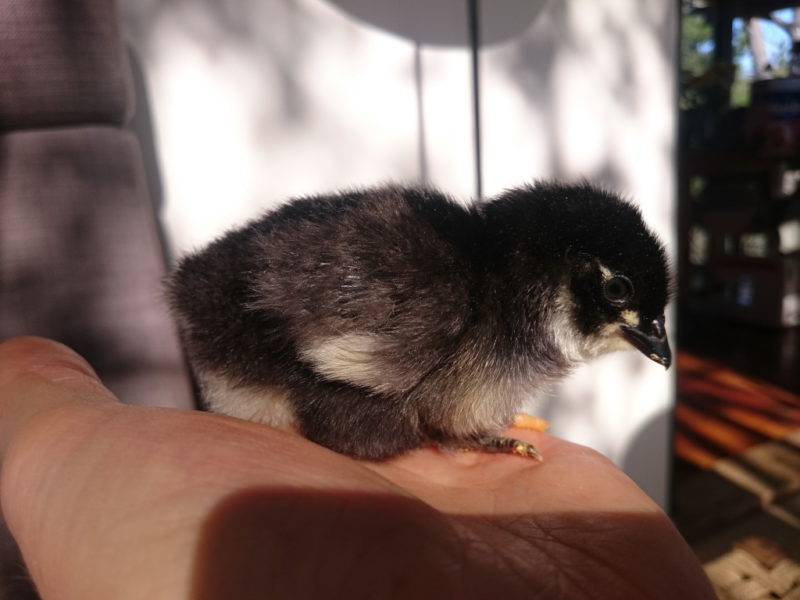 Penguin in the early days 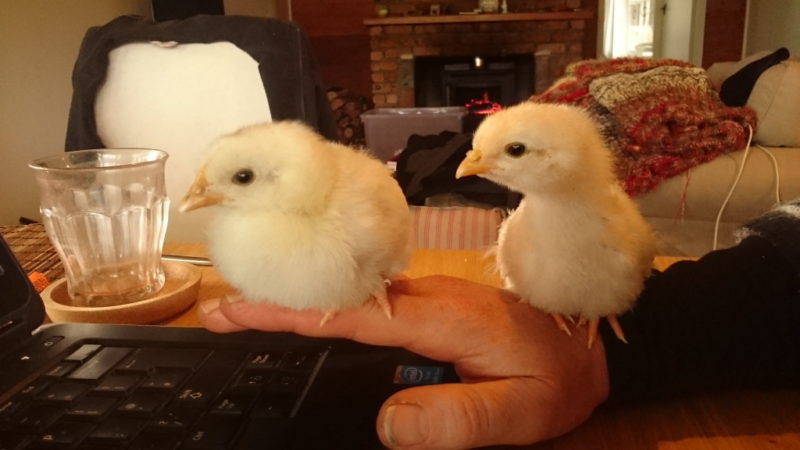 How to make typing at the computer hard… 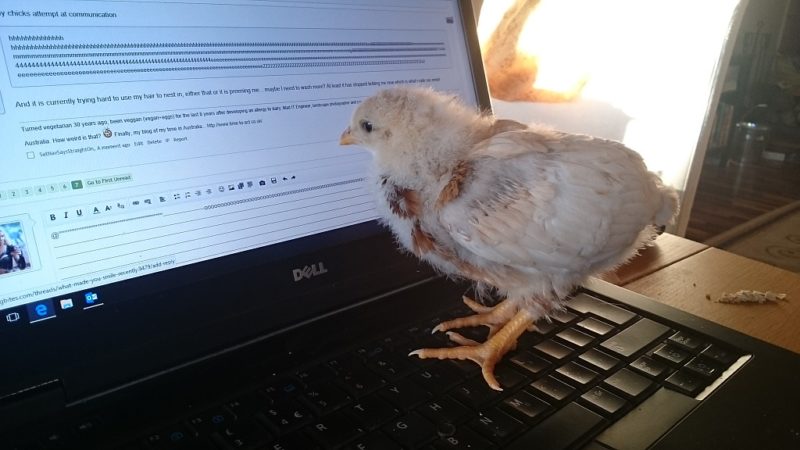 And how to make it gibberish! 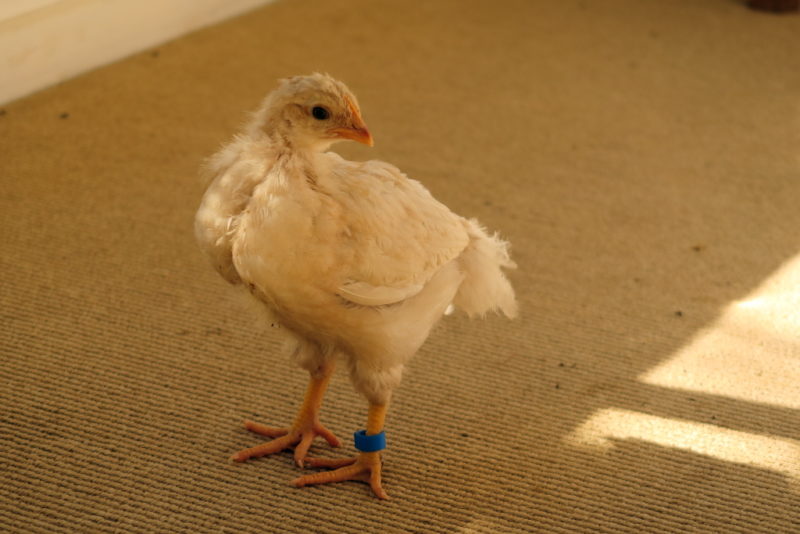 Meet blue – now 4 weeks old and a master of the playing dead act. 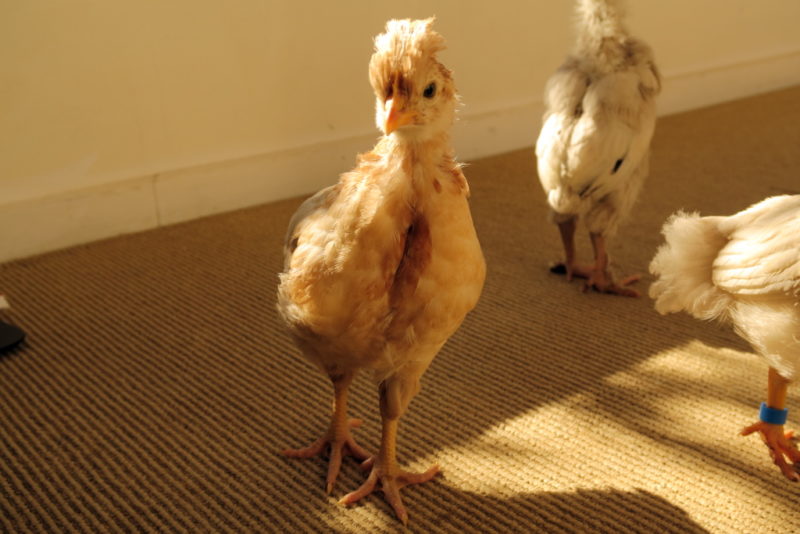 Syd is still having a bad hair day. 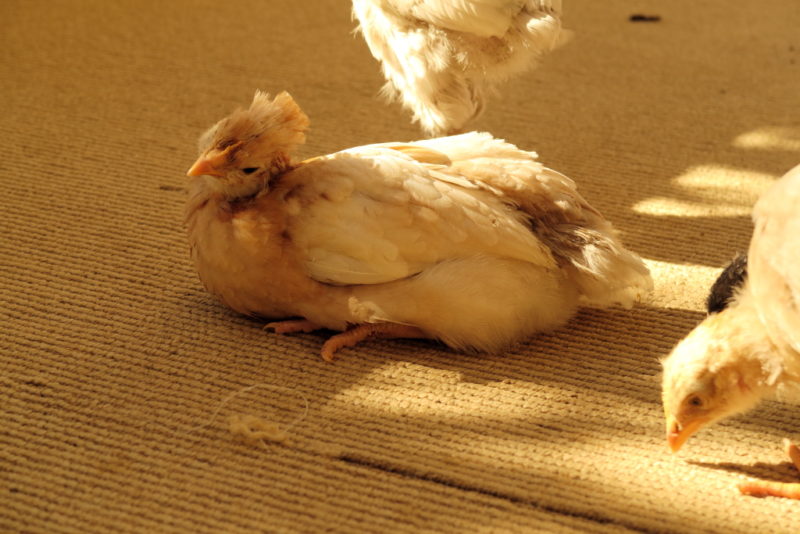 Look, see if I care! 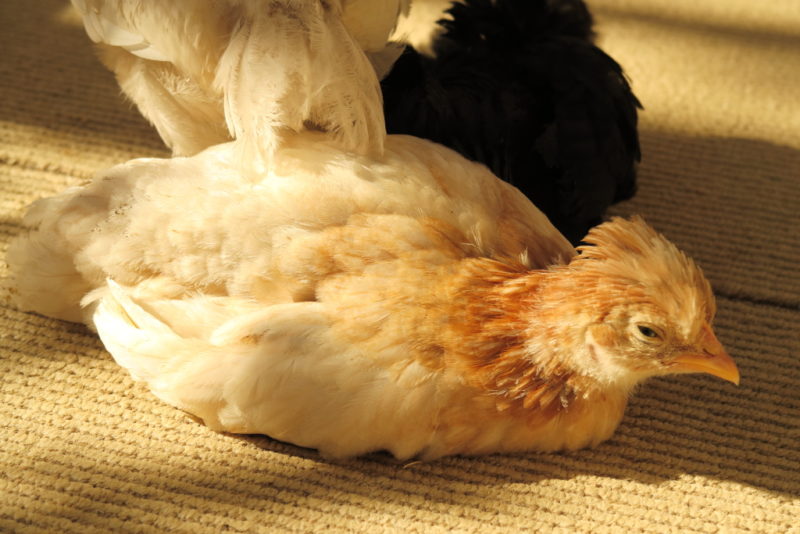 Enjoying the sunshine and about to fall asleep in the camel pose! 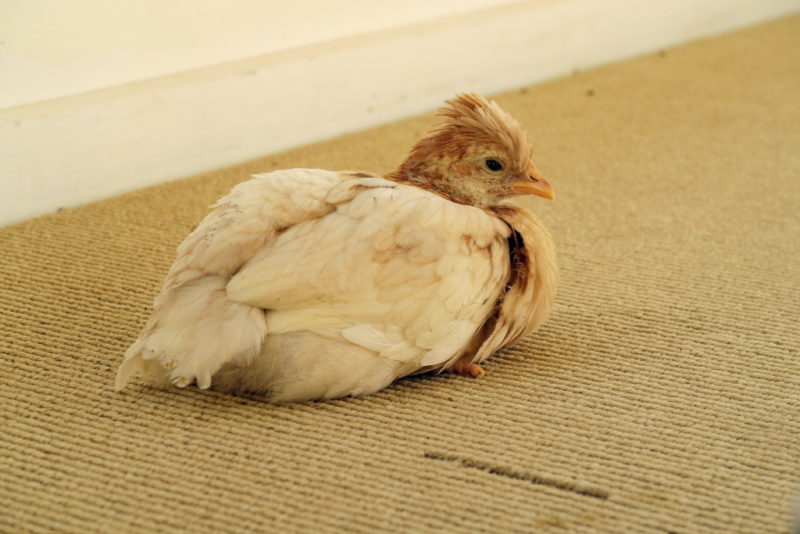 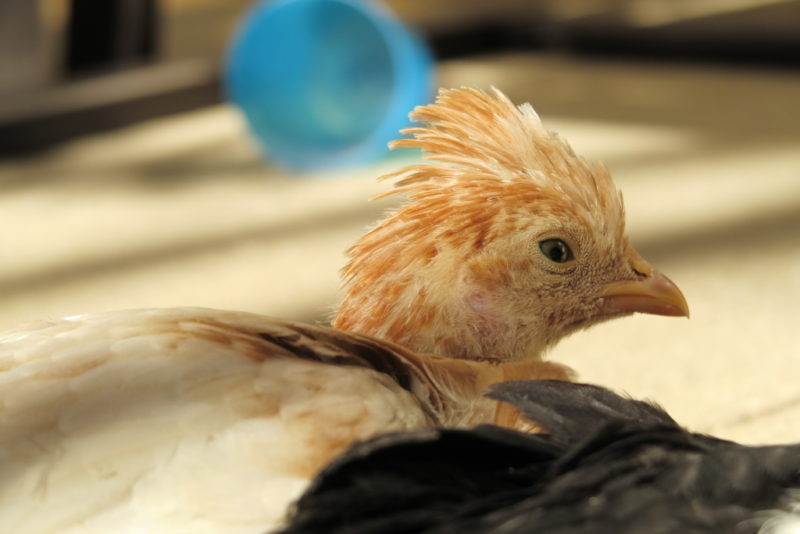 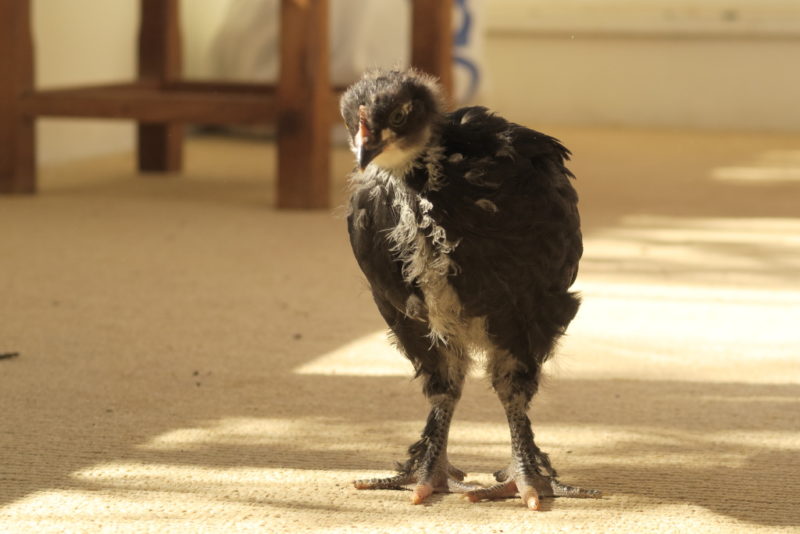 Mind you Penguin really is having a …. 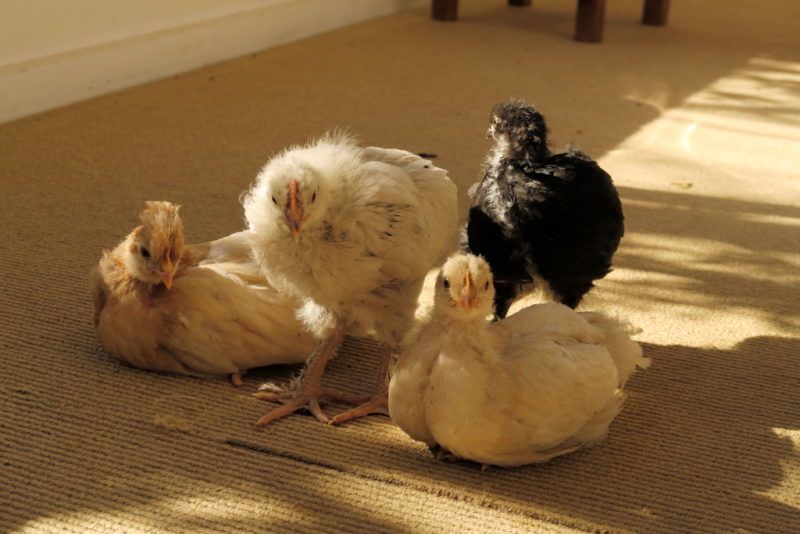 Now if you think you are having a bad hair day… Penguin’s sibling on the other hand… Standing with the feathered feet. 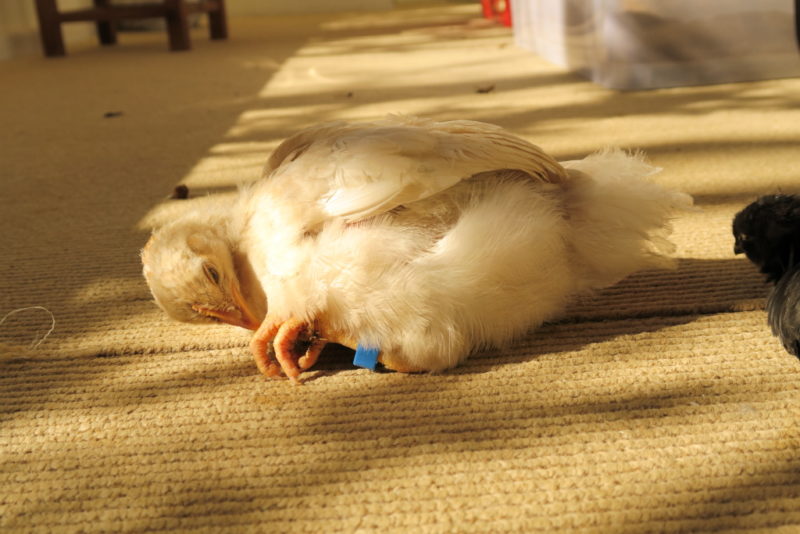 And Blue has mastered the art of playing dead and giving you are heart attack…. 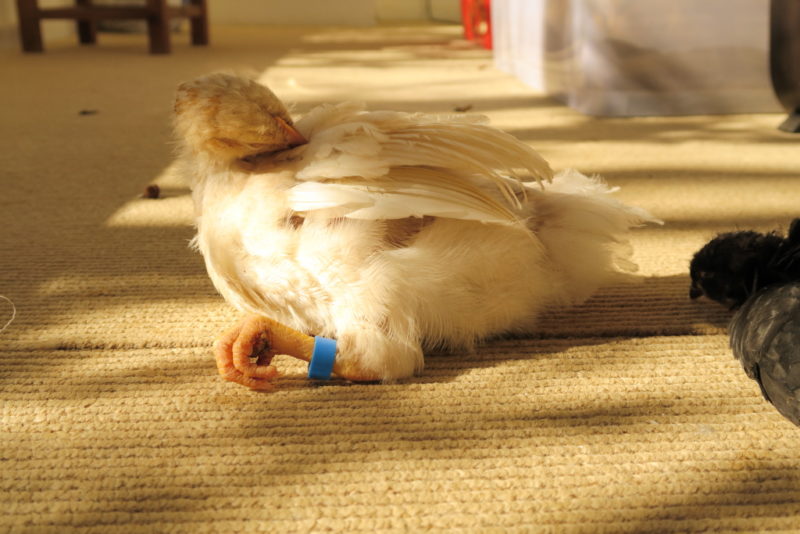 … until the itch is too much that is. 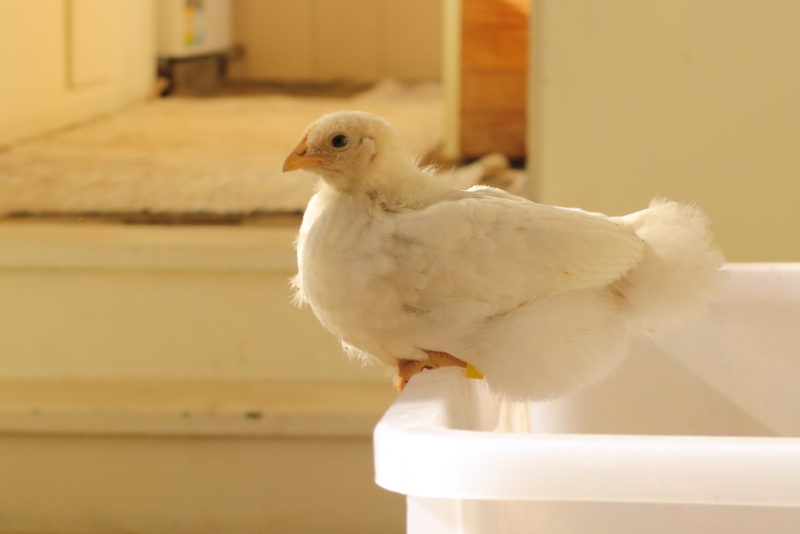 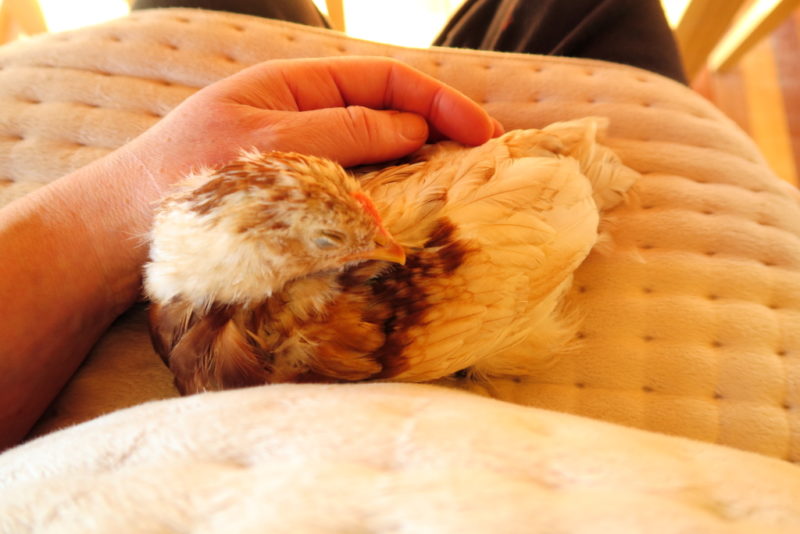 It’s a hard life after a bath.  You just have to have a good sleep. 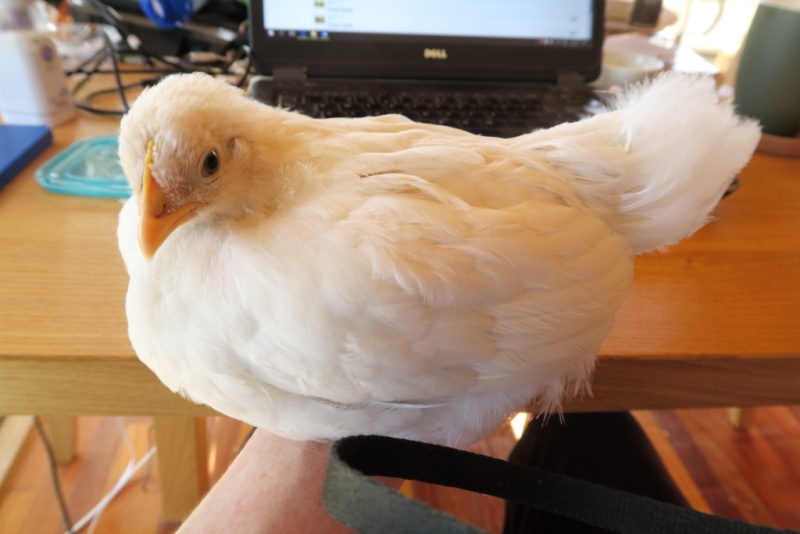 Unless you are Yellow and insist on balancing on my hand…. 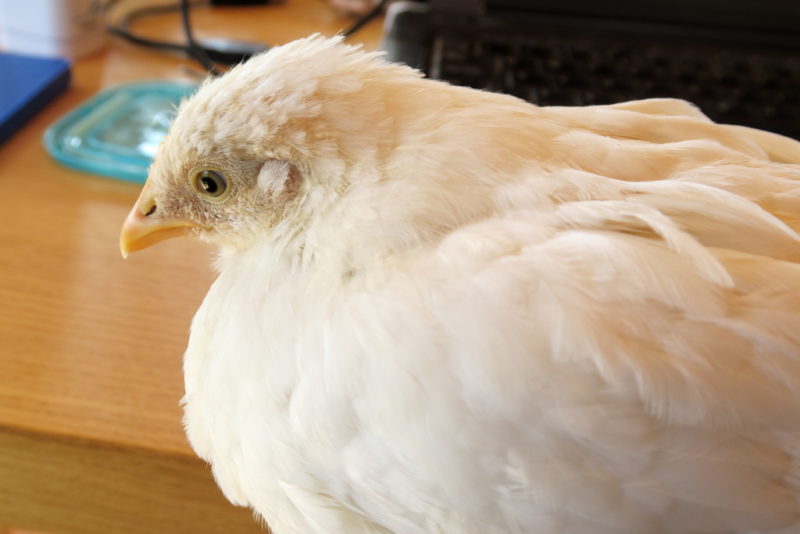 … and watching the world through the windows.