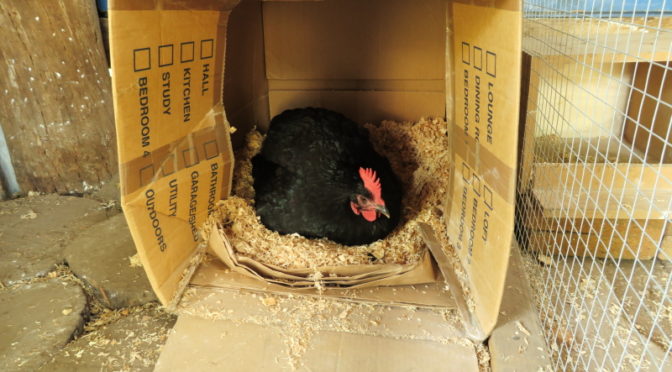 And so those the chook changes.  Sort of.  Mum, aka CC or Chatty Charmaine is sitting on eggs.  The hatch date is Saturday 10th December.  We are on day 3 now (on Tuesday)…

Hen eggs take around 21 days typically to hatch and the hatch rate will probably be very low.  Which will be a really good thing because you can only purchase fertile eggs in dozens and then because I didn’t want to have her reject expensive fertile, pure breed eggs (I chose Black Copper Marans, Welsummer, Lavender Arauncana and Buff or Brown Sussex), I tried with some of our (presumably) fertile eggs.  I don’t actually know if they are fertile, HP is untested so to speak!  Not really knowing which ones to choose from, I pulled 2 of her own out of the fridge initially and tried those on her (on Friday) – she took them with me just putting them under her whilst she sat on the wooden ones we had given her (Tuesday to Saturday last week she was on wooden ones) and fished the wooden ones out.  At least as many as I could find – there were only 4 but I didn’t get the m all.  I didn’t want to push my luck.

On Saturday morning I added a few more whilst she was still on the nest, to see what would happen… she took those as well.  And I was able to fish out the final wooden one.  Then in the evening,  when she was having one of her mad sessions where she comes off the nest for a short period of time to frantically feed, preen and drink and just generally run around in mad circles not really knowing what she wants to do next and trying hard to do it all at once, I put the pure heritage breed eggs into the nest.  She was sitting on 18 eggs.  She is large enough to do this without problem and tbh, if we get 2 female chicks from that number we will actually be quite lucky.  She finished her frantic session, went back to the next and got on the eggs as though they had always been there.  One small victory.  At least these should hatch something, which is what we need to break her cycle and get her out of being broody.

On Sunday she came off the eggs for another mad session and I counted the eggs… 19.  How.  Have I left a wooden one behind?  I double checked.  No, no wooden ones in there.  I can only assume that one of the girls snuck in whilst she was off the nest yesterday and laid.  It is one of the reasons (and the main one) she is now in her own enclosure.  Simply to protect her from the others who were trying to lay their eggs in the same nest box whilst she was sitting on the wooden ones last week.  Fights broke out, and you don’t want that when they are on any eggs.  Rotten eggs attract flies and don’t smell very nice either.  And today I have had to clean all the eggs very carefully, remove all the sawdust very carefully and replace it all whilst she was having one of her mad sessions.  One of the eggs had broken (I suspect JJ2’s who has a calcium problem) and it was smelling, attracting many flies which were annoying her and also coating the eggs in rotten egg is not good for them, it causes them to go rotten.  All done.  You have to not rotate the eggs, you have to keep the eggs where they were, you have to… well you get the idea.  She can’t know you have interfered with the nest – but CC is that laid back and easy going with me touching her and doing things in her area when she is on the nest (some 23 hours a day) that it would probably not be an issue… Anyhow, the eggs can’t be rotated or turned because of chook development and …

So an introduction to the chook house and the new setup.

Carrying on around to the right, we have the indoor dust bath area which they never really use except to walk over.  But there we go.  And then the edge of the door wedge (the doors had no stop to them and kept going, and we needed them to be up against something to make the chook house snake proof at night.

On the other side of the door are the roosting perches.  They will do all of the flock and more once they are all integrated (plus any chicks once they can fly high enough).

Up above now has netting on it – one of the newbies is rather good at flying!  But that is the hay loft.

The inner enclosure which has a soil floor which the chooks can happily dig.  HP has a perch to crow from and see over the fence in the morning.  And the green thing by the door is the auto-feeder or treadle feeder as it is also know.  They stand on it and a certain weight triggers it to open in the lower half.  Sadly it does not stop them removing the grain they don’t like – no don’t like this, no don’t like this, I’ll eat this, I’ll spit this out… and so on…  We are still working on finding a grain mix where someone in the flock will eat all of it, or more accurately, the entire flock put together will eat all of it and not waste any.

And finally the outer enclosure and chook house.  All of this is fenced in, has 2 gates (one is behind me and the other on the left is open) and is rather large.  And then there is the garden which they simply love.

Once the 2 newbies are integrated into the flock, I will move mum over to the larger area.  Not because she needs it – in fact she does not, but simply so that I can see her from the house when the chook house doors are open (which they are normally).

At the moment, I can’t see when she gets off the nest for one of her ‘sessions’ and it is hit and miss as to if I know about them.  Stuart was able to let her out on Sunday when he caught her having one.  I thought I had caught it this morning at 8am but when I opened the doors and went to her, she went back onto the nest instead.  At 10am I happened to be down in the veg plot and she must have heard me because all of a sudden I heard her mad clucking that is associated with these sessions and well, knew that my veg plot stuff wasn’t happening for a while.  I had to let her out and get the eggs clean, saw dust replaced and generally a tidy up in her area to reduce the mice issues which reduces the changes of any issues with snakes because mum is on the floor not wanting to be in a proper nesting box due to her size and weight and also when the chicks are born, they have to be able to get in and out of the nest box easily.  We may have to work on things!