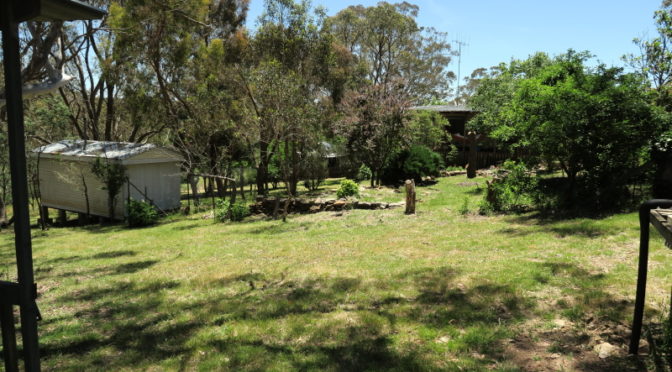 So where were we.  Ahh the grape vine and not the chatty variety either! Mind you the chooks are more than making up for the grapevine not being chatty… boy can the whinge and whine at me when I don’t give them what they want and how do I know this, because I don’t… but I am tempted sometimes to give in and have a quieter life I really am.  But some breeds are more ‘whiny’ than others… and I have at least one of them.

So, the grape vine came as a big surprise to both of us.  In fact both grape vines came as a surprise to us.  I am tempted to give them a good feed soon because I have a good supply of poultry droppings which I understand can go straight onto the ground, though you are then meant to leave them in the ground for 3 weeks before planting anything, but I was thinking of using them as a mulch over the top of the ground and letting them decompose, aka turn to dust which they are not far off doing anyway and then watering the grape vines to fertilise them.

So the week vanished without much trace. Mum, aka Charmaine, arrived at Day 7 of sitting on eggs having only broken the 1 egg which came as a huge surprise to all of us.  But there was a little drama with one of the rescue hens developing slowly…   Mum is a very large bird, much too large really and to top it off with, she has deformed feet.  It does affect her, you can see it from time to time if you watch her closely.  She often sits down to take the weight off her legs because of the feet issues.  I’ll see if I can locate a photo of her where her feet are visible so that you can see what I mean, but it means that her getting in and out of the nest is difficult for her without standing on the eggs.  And her weight on top of any eggs can cause problems if the egg does not have a strong enough shell.  And this is what happened with the first egg that was broken.  You can’t leave a broken egg in the nest for a whole variety of reasons, not least of all the smell.  But other issues include the fact that a broken egg will contaminate all of the other eggs, causing them all to die.  It attracts lots of flies; it sticks to mum and her feathers, and it glues a lot of the nesting material together in a horrible mess that goes well, horrible really… you get the idea.  It is bad for the eggs, it is bad for the developing embryos, it is bad for mum and it is bad for us because no chicks means mums broodiness won’t break and she will want to sit some more… So the breeder she came from never actually let her sit on eggs so ironically, despite being 6 years old this will be her first clutch of chicks, if we get any.

Saturday also arrived at the conclusion that a strimmer alone was not going to keep on top of the grass situation here.  The original plan had been to make sure that once a day, I went out with the strimmer and cut an area of grass until the battery went flat.  The idea was working really well right up until I hurt my ribs and couldn’t hold the strimmer for 20 minutes at a time (roughly the length of time taken to flatten the battery).  Then I was no longer on top of it, and more over one of the paddocks which is close to the house had not been cut at all.  The more I looked at the areas concerned, the more I realised that a lawn mover would be possible if certain areas were avoided and the strimmer used for them.  Bare in mind we are on a mountainside here, and the slope is a good slope in places with rocky outcrops (only 1 or 2 feet high) sticking through the earth/grass or more often than not hidden by it.  So Saturday afternoon Stuart was sent back into Canberra to come home with a lawnmower whilst I tried to work out what the problem with a little rescue chook was.  It took him a while but he came home with a Subaru.  I didn’t know they did lawnmowers either and the truth is that they don’t.  But the engine on it is Subaru and Stuart likes saying he has a …

So Sunday was get the lawns under control day… lawn mowing and strimming day.  Now Stuart has some overalls which are a really heavyweight dark blue cotton and he wears clothing underneath them (don’t ask why) and Sunday was a hot day (around 28°C)… you can see where this is going, can’t you?

Here is the lawn he is complaining about.  I’ll try to walk you through it with pictures, but this could take as long as it took him to cut the lawn and he didn’t actually do all of it! The cheat…

Well, I did say it would take a while to walk you through it.  And he missed quite a few areas from this initial cut.  Areas such as inside the corral (picture 2 on the RHS), around some of the buildings, the area in the middle called the ‘garden’, the various other paddocks, the septic tank field which needs a path cutting through it for the same reason as the paddock from the chook enclosure to the water pump stable block…

He complained that it took him 4½ hours.  Personally I am amazed that he managed so much in such a short period of time; just don’t tell him that!  We are told that the grass will stop growing.    We just have to wait until winter arrives again! rofl.

So our little chook called Ellie.  She is EE or Ellie the Escapologist because she is the one that is a really good flyer.  She is the one that can get up into the hayloft.  She also has a potentially life threatening problem.  She keeps throwing up.  She vomits a clear, colourless, odourless liquid: namely water.  Talking with a breeder who is helping me with the chooks, we went through a whole load of options.  Some took overnight to work out.  Was her crop emptying at night – well, no, it wasn’t actually.  Could she have something called sour crop or an impacted crop?  We ruled out sour crop almost immediately because a) she would be much more ill than she is – in fact she is thriving here and looks a lot better than the same time the previous weekend and b) having smelt what she was throwing up, there was no smell. Sour crop can be a septic condition, where the contents of the crop have gone bad and rot in the crop instead of passing through the digestive tract.  It is caused by a yeast infection.  The same one humans get but with a chook it can be fatal.  It also makes their breath smell and anything they throw up would also smell.  So that was quickly ruled out.  An impacted crop needed her to have had a good feed the night before and then not allowed anything other than water until she was checked over the following morning.  Now our setup has a problem.  At the moment, the area that I could potentially use for sectioning off a chook and stopping them getting at the autofeeder or soil which has seed in it in the inner enclosure is in use with a broody chook and just a day previously I had removed the partition that made it 2 areas and made one larger area, with a single door and got all of the roof area fenced in to protect from ravens and birds of prey.  Undoing that work was not an option and putting her in with the broody chook would result in a chook fight with one very hurt chook the next day and probably no eggs still alive in the process.  So that was a no go.

In the end the breeder offered to come around with a guinea pig cage that would work for keeping a chook in overnight, but no longer.  Luckily EE is a smaller chook so this is an option and Sandra had a good look an Ellie for me as well.  She is in good health, other than throwing up from time to time (a serious condition because they can inhale the vomit and suffocate quite easily).  It is happening on a daily basis minimum, so it is a real risk and problem that needs addressing.  The following morning, whilst there was some grain left over in her crop from the night before, there wasn’t as much as the previous day when I had inspected her (but that day she had had access to the inner enclosure).  It wasn’t an impacted crop.  Starving her out of it wasn’t necessary.   So at the end of the day, we actually don’t know what is causing it.  At the moment it is no distressing her, not upsetting her and she is healthy and getting fitter by the day.  It is a case of monitoring it and seeing if it was actually the reason she was being culled from the flock and why she was up for ‘sale’.

Finally, we also have some good news relating to the goldfish pond (this is the larger of the 3 ponds we have and the one that I found the goldfish in).  At least 2 of the adult goldfish are still alive (a pair going by the little ones swimming around)…  If you look towards the top of the green leaf, it is pointing out the goldfish!  I have since seen them every morning, so I will try to get a better picture if my luck holds out.

Well – that is it for last week.  I will try to add some more bird or veg plot pictures in the next few days, but tonight I start the Christmas Cake and this is a 2 day event… And tomorrow we have the wombat man around.  The Landlord is talking about putting a small electric fence around the perimeter of the house.  I know it is his house, but the wombat has gone now, the hole is sealed up and sound, I have chooks and chicks to consider – today is day 11 (of 21) and well, I really can’t see how practical it actually is, nor do I really want to have to pay for it either.  But there we go.

Time to do some housework – preferably not involving the hoover which pumps out too much hot air, then start the cake.  The fruit has to be picked over and soaked overnight and this is the first time I have tried to do it is Australia and we haven’t been able to get all of our usual ingredients so it is going to be interested.  At least I have my cake tin!