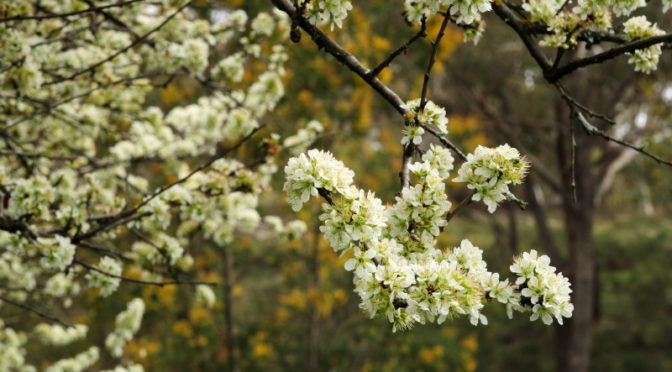 Its been a busy week here at 230A.  I find I haven’t managed to get any time out to post another update.  So despite the glorious, if a touch cold (3°C this morning), sunshine and lovely colours and light this morning, I thought I would try to remember what went on last week.

Well I know that Spring really is finally arriving, albeit with a difficult start.  We have had a lot of rain, and then some more.  The water tanks are almost full, and the little one (3,250L) keeps overflowing whilst the big one (22,275L) doesn’t seem to want to get full, so I have taken us off the big one and moved us over to the little one.  I thought I may as well be using the water that was running out of it!  It is just a shame I can’t capture more rain water from some of the bigger roofs around the place!  I still want to get a solar shower installed, even if it is a makeshift one (well it was never going to be anything else was it?).  We have another roof with guttering on it already (the studio), it just doesn’t get much sunshine from what I can see.  But if we could somehow change which end the water runs off (it runs off on the uphill end of the building next to the entrance for some mad reason, then back down the mountainside past the building!), we could maximise both the sunshine the shower gets and keep it out of sight, plus the drop would be better… and it is not as though anyone here is going to see us shower like that.  We may as well use the free water and enjoy the view (he, he).

Two of the new chooks have settled in really well (Just Jenny, who is JJ2 and Chatty Charmaine, CC) but the 3rd is causing a few problems (Vindictive Vickie, VV or Trouble as she is rapidly being renamed).  VV has taken to bullying the others whenever she can, with the exception of CC, and is pulling the others out of the nesting boxes before they have even lain the egg she is trying so desperately to sit on.  The trouble is that when you give her an egg to sit on, she only sits on it for a couple of hours before going off.  She needs to be sitting on them night and day before we could give her a couple of chicks to raise and deal with the broodiness that way.  Mind you that said, last week we had 17 eggs.  Even CC, who is in her 6th laying season (so could be 7 years old) laid 2 eggs and yesterday laid another.  JJ has resumed laying eggs once she could get into the nesting boxes, she lays everyday without fail and is our youngest chook.  HH (in her 2nd laying season) lays 2 days on, one day off. But she is a very small, light bird and a heritage breed so I don’t expect her to lay every day.  Chooks don’t normally it is just that they have been bred to lay everyday by the egg industry.  JJ2 is in her 3rd laying season, and I wasn’t expecting her to lay at all.  She is now laying almost everyday and she lays very big eggs!  VV is the same breed and I think the same age.  She actually laid for the first time on Sunday which really took us by surprise but since then hasn’t lain again because of the stress of being separated from the rest of the flock, not that she actually spent much time with it when it was her own choice.  She would usually be elsewhere doing something else entirely.  Hopefully some time out in the naughty box will help her sort life out!

Hopefully this new arrangement which is only temporary will allow time for her to socialise without blood being shed.  Lots of feathers have been shed to get to this stage and we have been talking with the lady who rescued the 3 birds in the first place as to what to do and how best to proceed.  Ideally a hen needs a minimum of 1m² space, the recommended amount is 3m² per bird if they are kept confined to a certain area.  VV has about 1.8m² at the moment, so it can really only be a temporary solution.  If it does not work, then she will have to be returned to rescue lady where she had less freedom but was less of a problem.  The other 2 have integrated into our flock without an issue luckily.

Today, VV was a lot calmer and has actually taken to sitting down and ignoring the laying chooks (so far only JJ) which is a really good sign. Hopefully once she has been ‘reprogrammed’ she can come out permanently.  I’ll arrange for her to have a stretch of her legs later today.

So what else?  Well the place is starting to flower.  There are loads and loads around, mostly of the same thing.  The lawn is less of a lawn and more of a weed patch – there’s a surprise and the paddocks have the most amazing green grass, such to the point where I am seriously considering a switch!  I could sell the grass in the paddocks it is so good!  Just typical though isn’t it.  There are fruit trees everywhere – mostly plums or cherry I would guess, but we will see.

Then there are a few plants (not many and only a few) starting to show themselves in the garden.  Not many, but a few.

The weekend, was as usual, rather busy, but Saturday being as busy as it was meant lunch out as a treat, so we went to our favourite restaurant which was packed out to the max.  Even the outdoor seating (much more than inside) was all full which is fantastic to see.  I overheard one person say that they had no idea so many vegans existed in Canberra!  It’s a vegan restaurant, but I know that not everyone who visits it is vegan because it is so good.  And they have now started a Thursday night opening as well!  We had the special which was a burger with marinated tempeh, coconut bacon, coconut cheese, balsamic onions, and mushrooms served with a kale salad. It was, as usual, excellent if a touch messy to eat, but the best option is just to accept that you are going to get your hands messy and get on with it.  As usual, I had too much!  There was a vanilla cheesecake which was wonderful and creamy and too nice.  The cashew nut milk hot chocolate was as always wonderful as well.

And we were home for 2:30pm which was a real surprise.  I was expecting it to be much later.  Sunday was spent making the changes to the chook house and some gardening, what gardening you can when the chooks decide to stand on the ground you are trying hard to turn over with the fork already in there.  One of us now distracts them, whilst the other can get on with some gardening and when we don’t uncover enough insects, worms or grubs in general, they go and investigate what the other of us is up to.  Stop digging for a few minutes and you can almost guarantee that they will be elsewhere!

So the only other thing that has happened is that there were a couple of family birthdays this week, so Happy Birthday needs to be said to both Sheila (Stuart’s mum) and Annie (Stuart’s Sister-in-Law).

And I managed to get to go to a garden centre.  I wanted some wellies (gum boots here in Australia) and failed on that front.  I needed some more outdoor gloves (I seem to get through them at a rate of knots) succeeded and wanted a few plants to brighten up the garden a touch, also succeeded on that front.  A few veg and herbs were also purchased and they are being planted out slowly.  The potatoes have finally started to show their heads above the soil, so have been earthed up which now almost frees up another raised border to be planted, but part of that is for courgettes and cucumbers so I can’t yet plant those out because yet again overnight it was 3°C, so too cold for them.  But the onions, garlic, leeks, kale, cabbage and a few others can be planted out.  I have also seen the first signs that the peas have germinated, but there is yet to be any sign regarding the beans – either variety.  The fennel, thyme, parsley and coriander are all starting to grow.  The marjoram, oregano rocket and peppermint remain indoors for the moment however.  As do the tomatoes, aubergine and chilli plants.

I did forget to mention we had our first harvest of mushrooms!  Just under 1kg.  Mushrooms are very expensive to buy in the supermarkets here, over AUD$11 per kg so growing our own may work out cheaper.  It is certainly tastier anyhow.

A few wild flowers from around the place.

And finally, I found this.  A wombat skull with wombat droppings on it.  Who said they have no sense of humour!