Christmas this year had a twist. An unpleasant twist.

It’s hot, much hotter than previous years but the evenings are normally cooler at this time of year. Not this year.

And usually once it goes dark, you can open the windows and doors and let cool air in. Not this year. In fact this year the only thing you’d key in would be smoke. And not nice smoke either.

So we started with a tree. Luckily we got the tree the day before the smoke became a problem. Until then the weather had been stable with the wind blowing in the prevailing direction and blowing the smoke out to sea. But the fires are now that big that they are controlling the weather, changing the wind direction, or in the evening as the air cools, the smoke is simply compressed and can only spread outwards. And whilst we are only 50km from one off the fires, it is rather ironically the fire twice that distance away, that is causing the problems with the smoke. 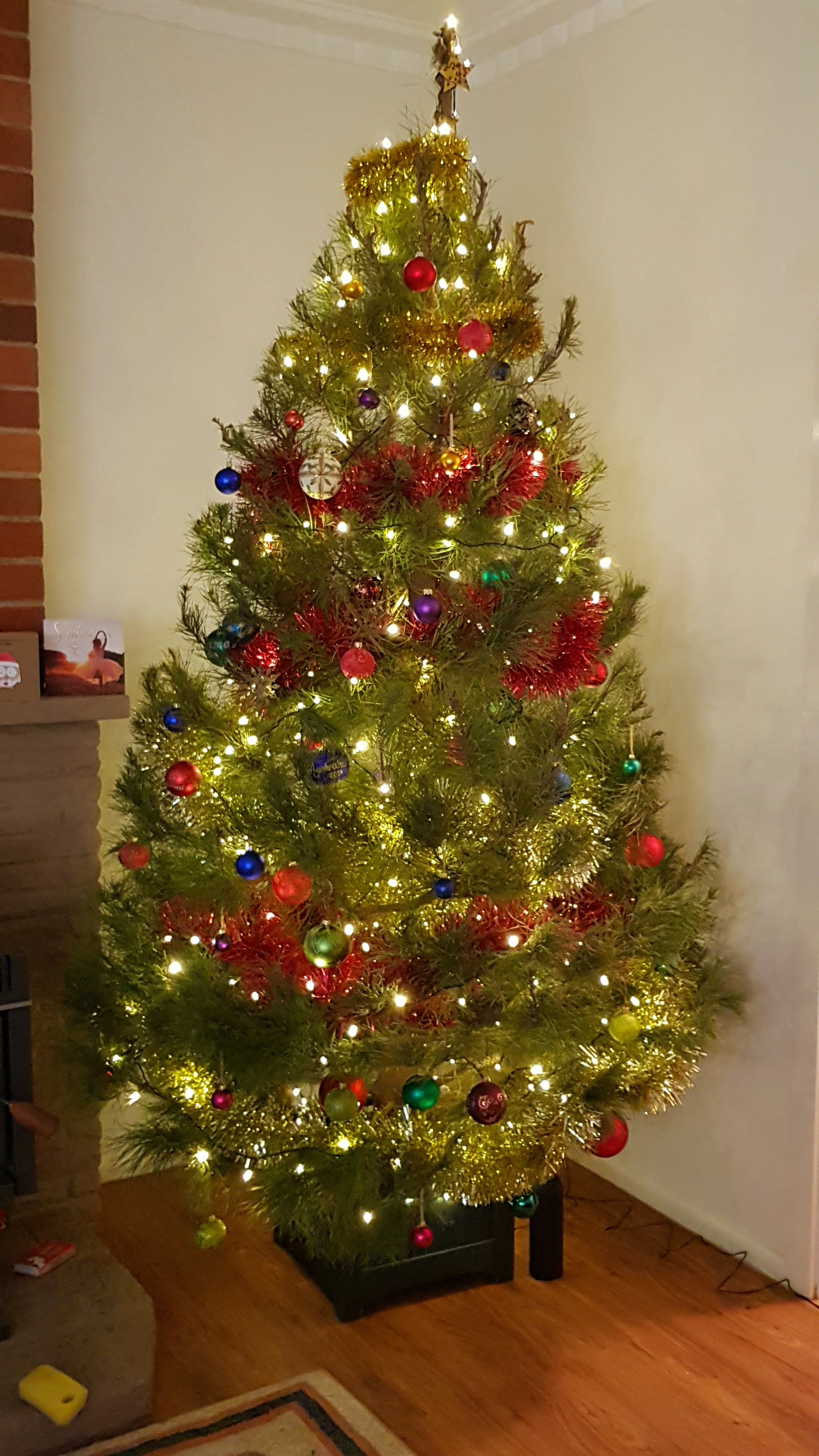 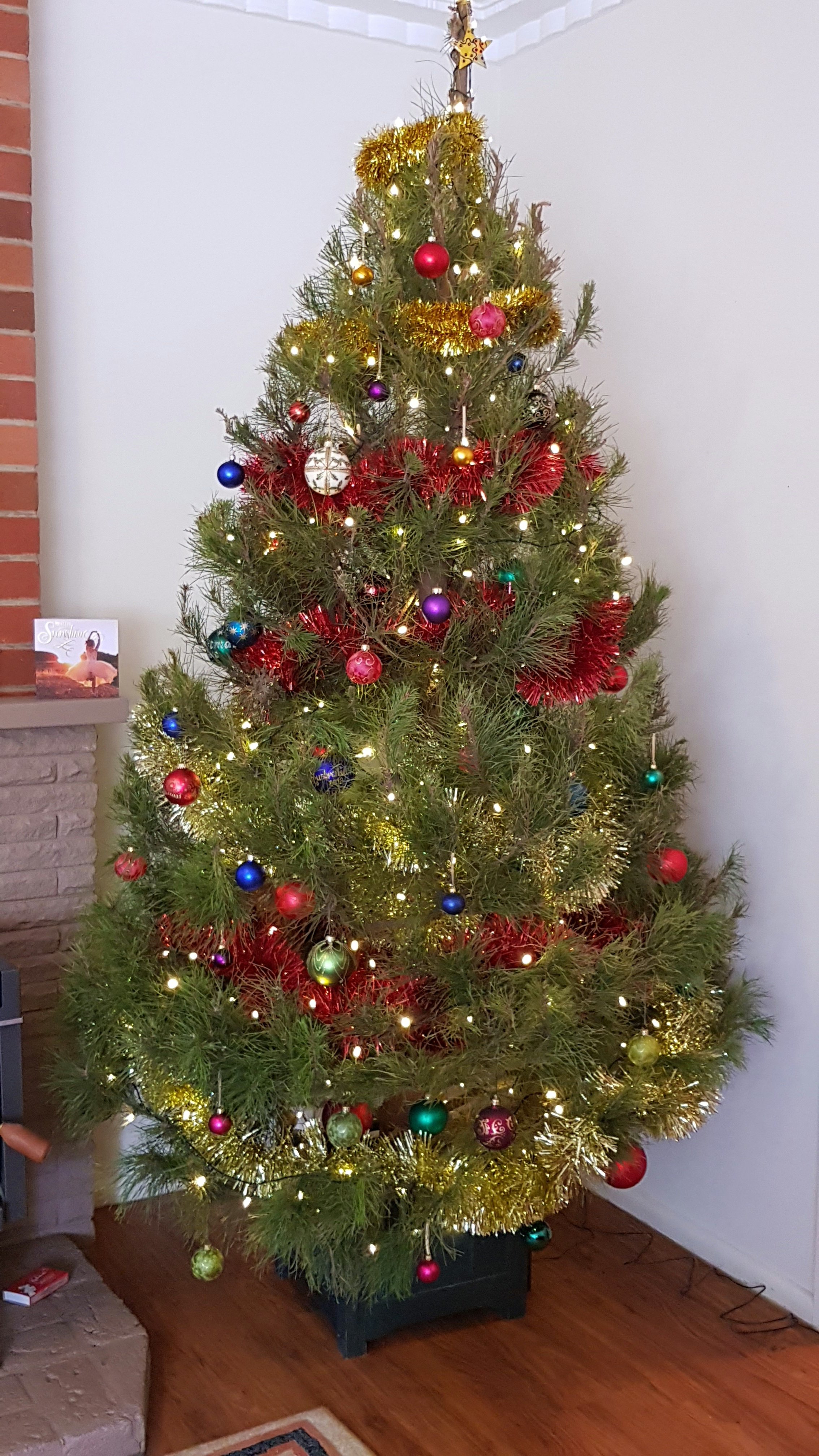 And so a new routine had started, and it isn’t a great one. Be play a game with the smoke coming in at night. How long can we leave the windows open before it arrives? Some nights it is not even a question. The smoke is there before dark, before it gets cool. Other nights we get 5 minutes of fresher air before having to lock up and swelter in the heat. And other nights we might get ½ hr. On the odd rare occasion, we get to leave them open longer, sleep is interrupted by the constant fear at the back of your mind. Needless to say my asthma had been giving me problems, but it does act as an early warning system to the smokes arrival. You just don’t get much warning and it had taken it’s toll on my lungs. 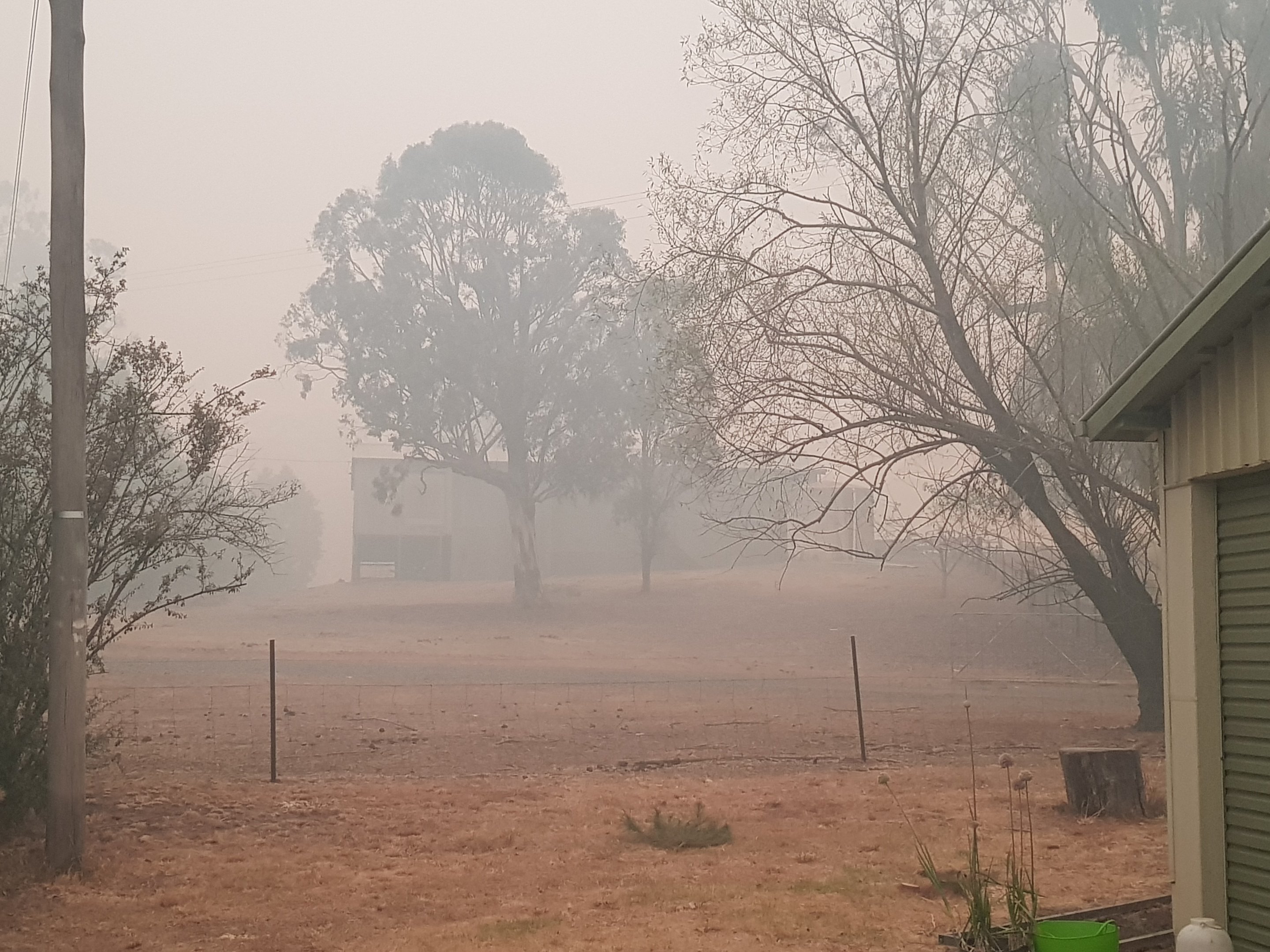 This was the middle of 1 day. A surprisingly cool day that we couldn’t enjoy.

We’ve taken to swimming or going to the cinema when we need to get away from the smoke. Swimming indoors is meant to be ok according to the health officials, but last time around, both of us were struggling with breathing. And a quick chat with other swimmers revealed almost everyone was having problems.

The Saturday before Christmas saw is at the cinema, like many others, hiding from the 44°C forecast that day. It hit 43.4°C at home. An unwelcome need record temperature. 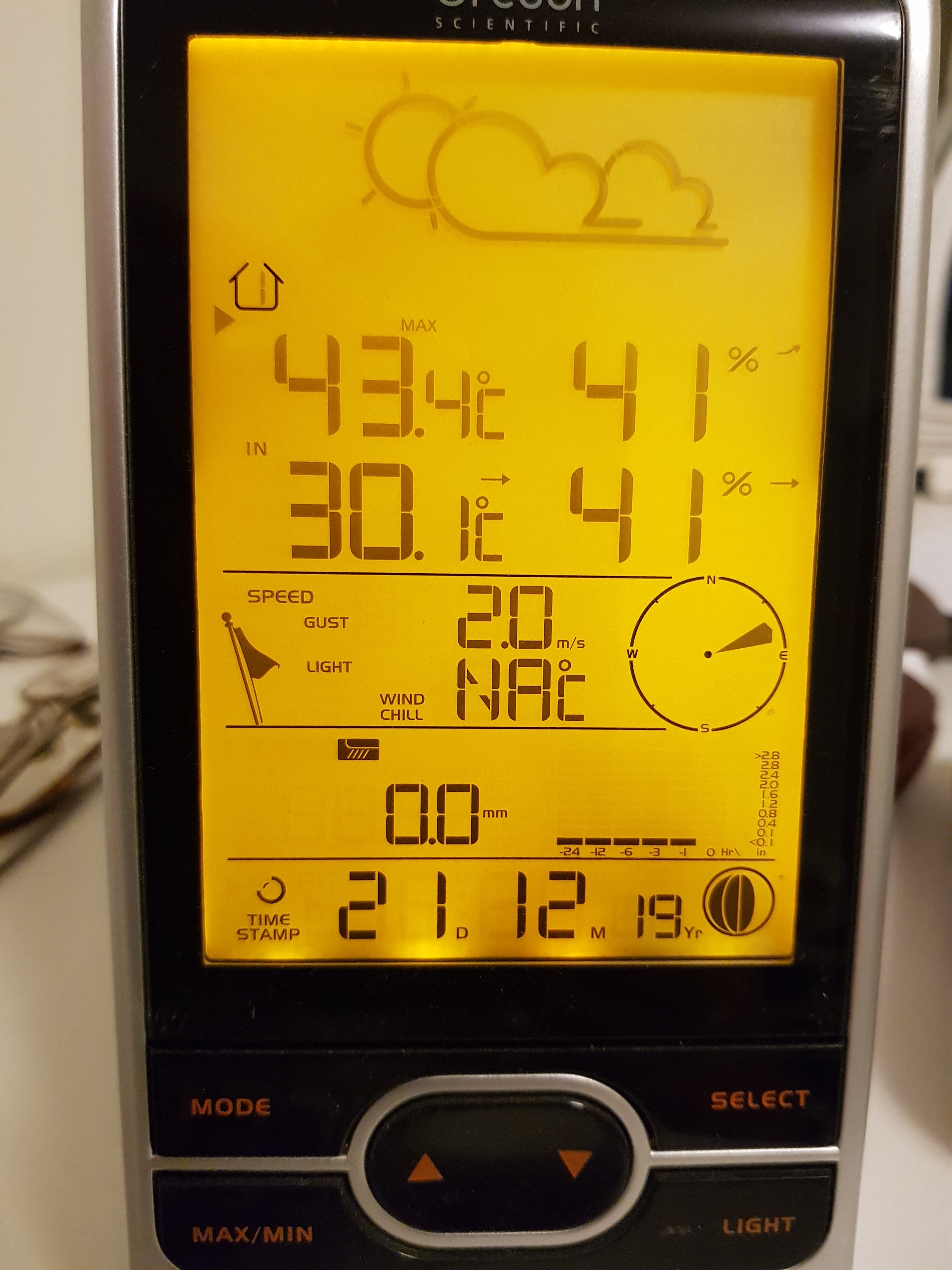 It also saw the arrival of 3 bantam chicks. Another 4 were to follow on my birthday. 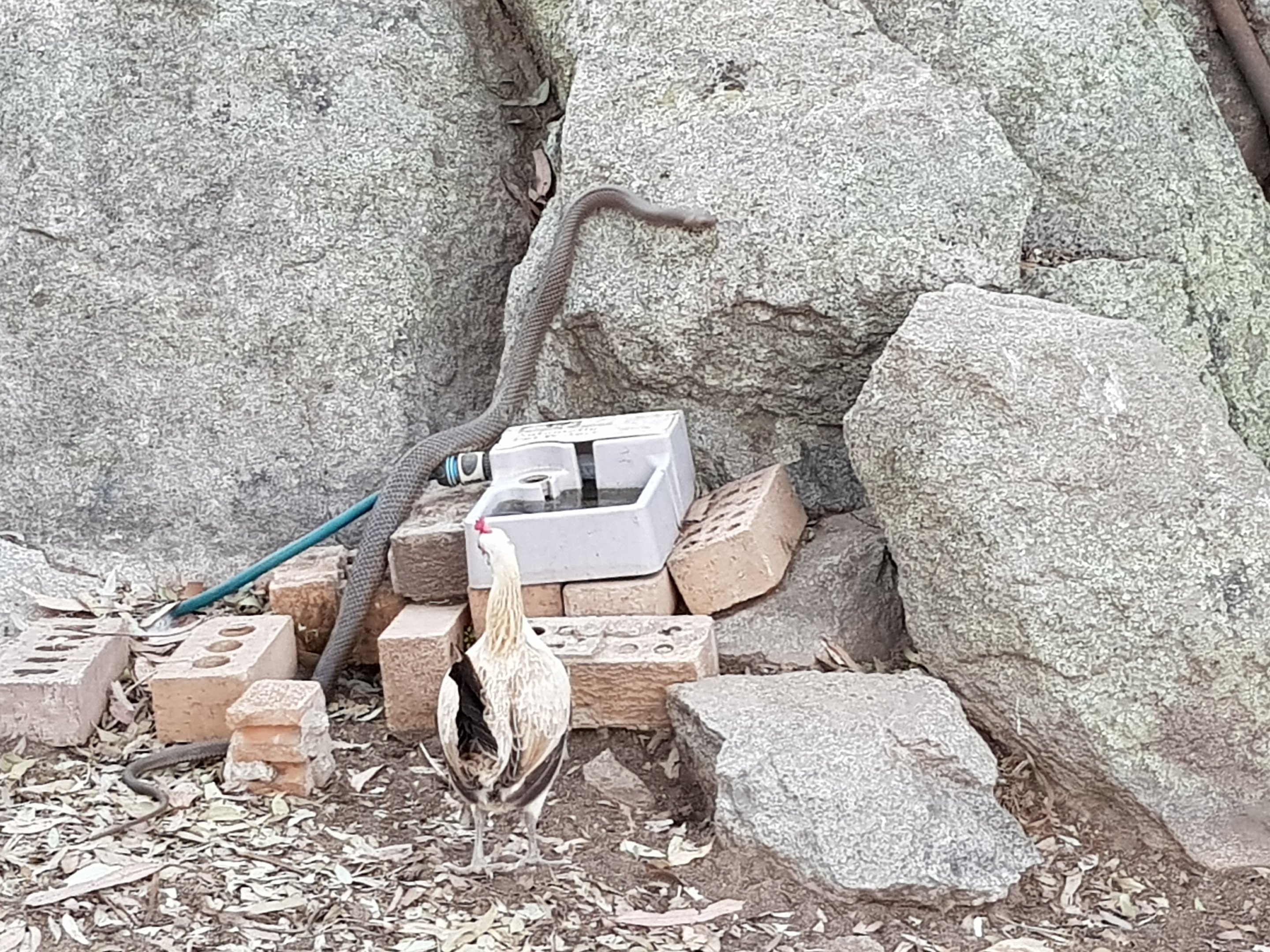 Christmas also saw the arrival of our first Brown Snake. Brown’s are one of Australia’s most poisonous snakes, though few humans die from bites. It is usually pets that die. As you can see, my smallest chook decided to prove that reason for me. She found things being thrown at her immediately after this photo. The Brown is as big as they come. It’s a fully grown adult and was huge. Miss Prim would have been nothing more than a snack. Luckily I managed to frighten her away, then I chased her into the chicken coop, where all of the others were hiding and locked them all in safely away from the Brown.

Christmas Day saw us starting having having pikelets served with lemon juice, maple syrup and some blueberries. 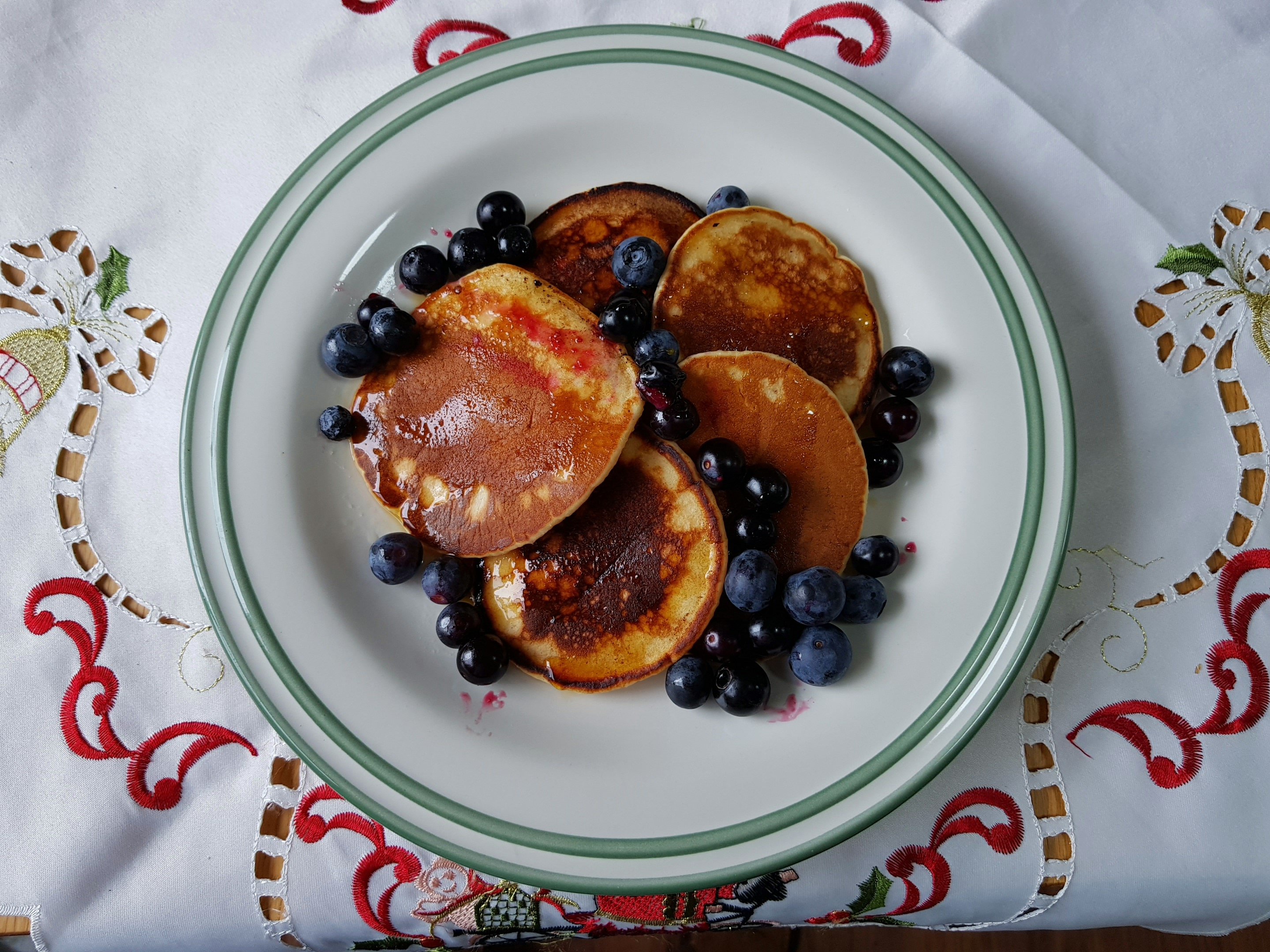 Then having one of our favorite salads. I had started it 2 days before, soaking the chickpeas. Then on Christmas Eve, very first thing in the morning, cooking the chickpeas in the pressure cooker. It would have been on the BBQ but it was smokey again. Then the salad was made up and allowed to marinate for 24hrs. We have found the flavour improves considerably if we do this. 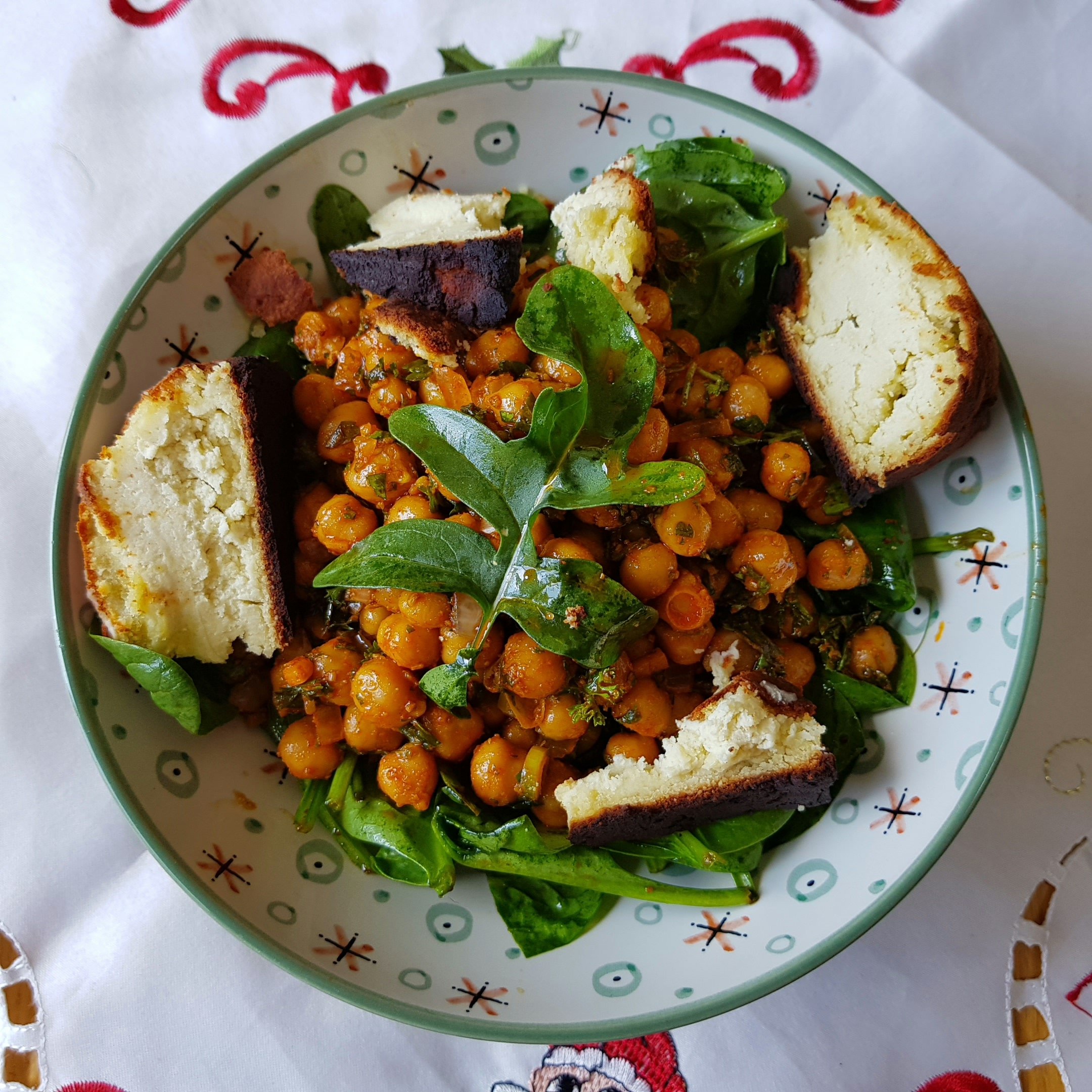 Dessert was made on the day, along with a baked almond feta cheese which was delicious. 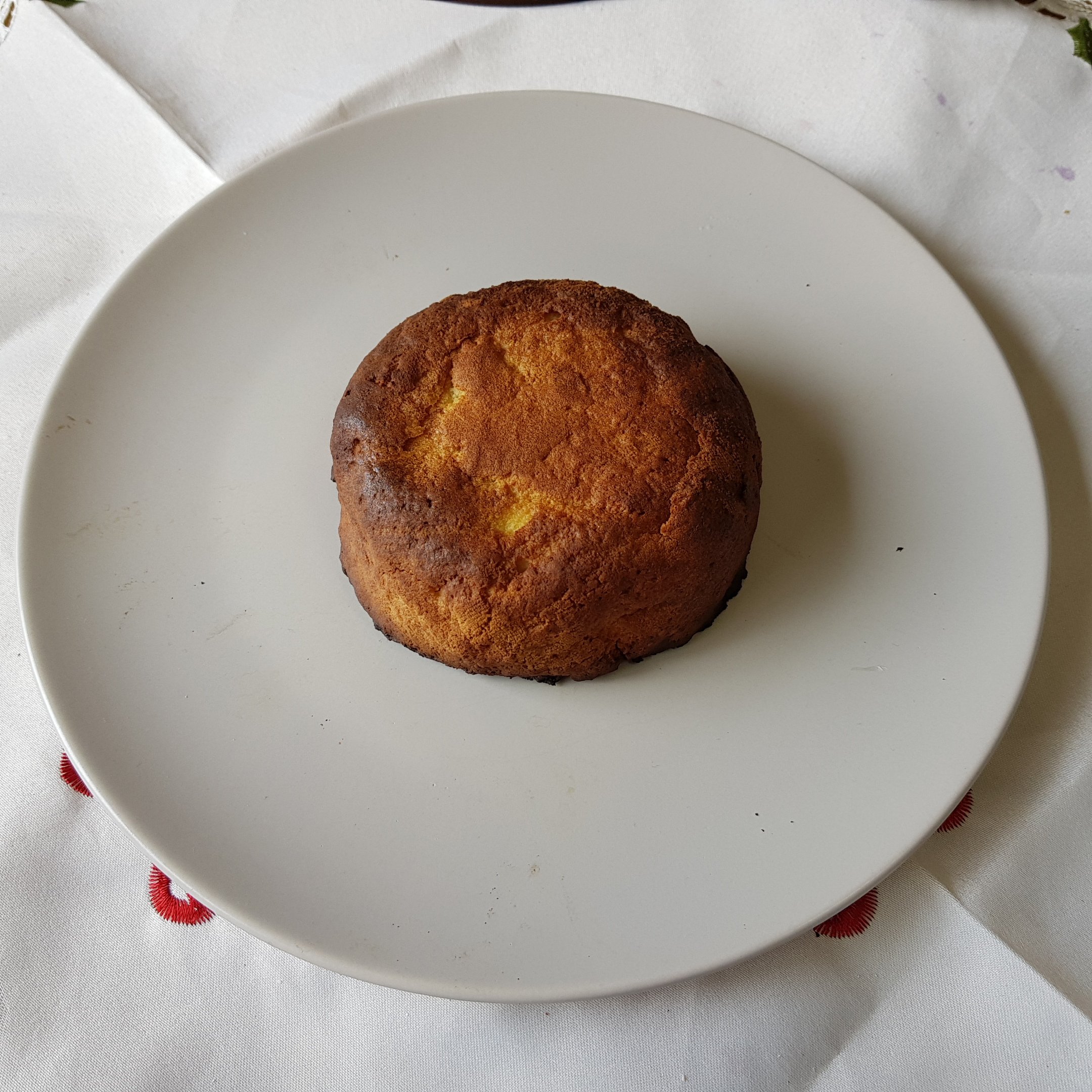 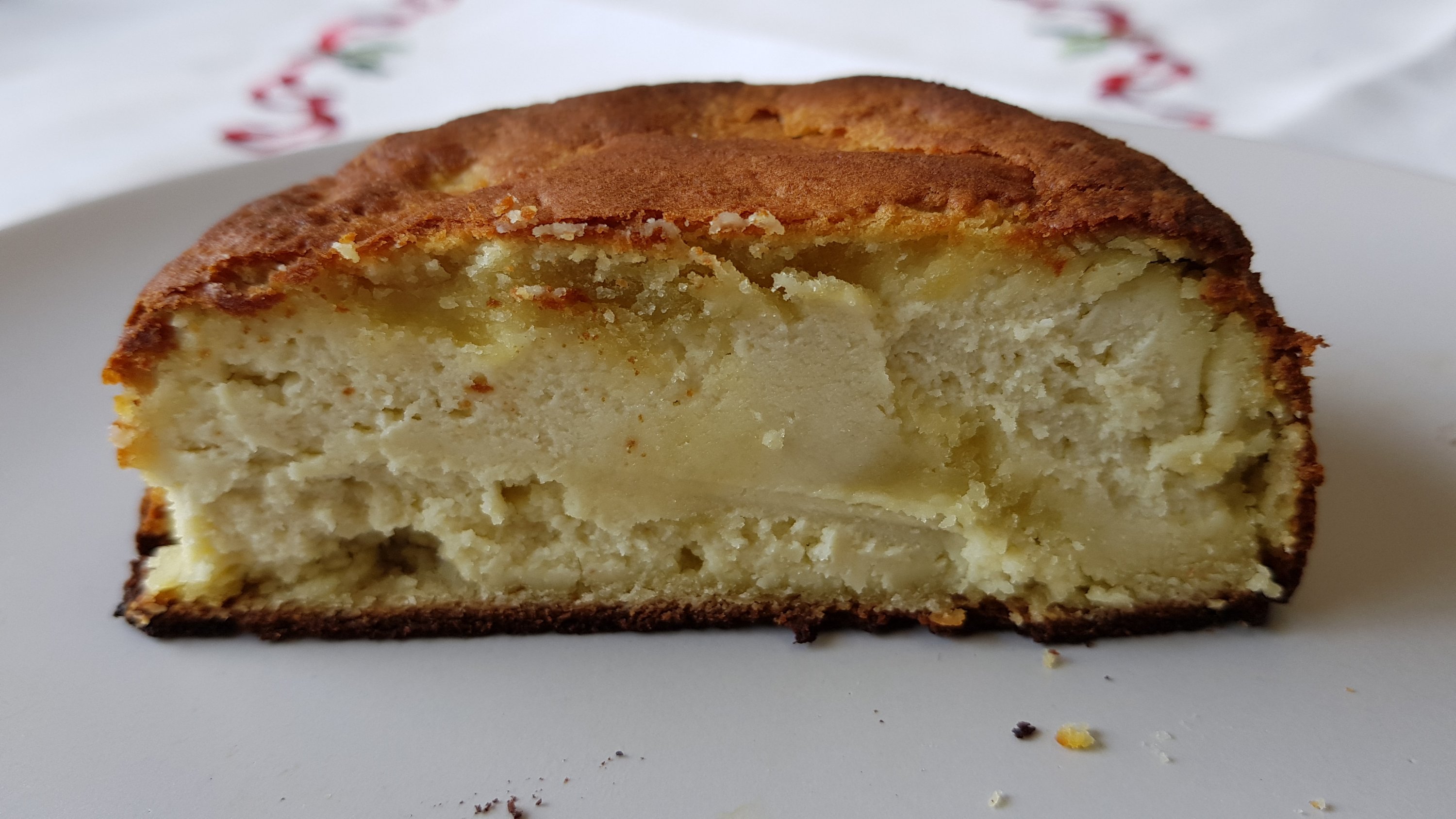 The pavlova was a huge success this year, actually staying in 1 piece until being served! 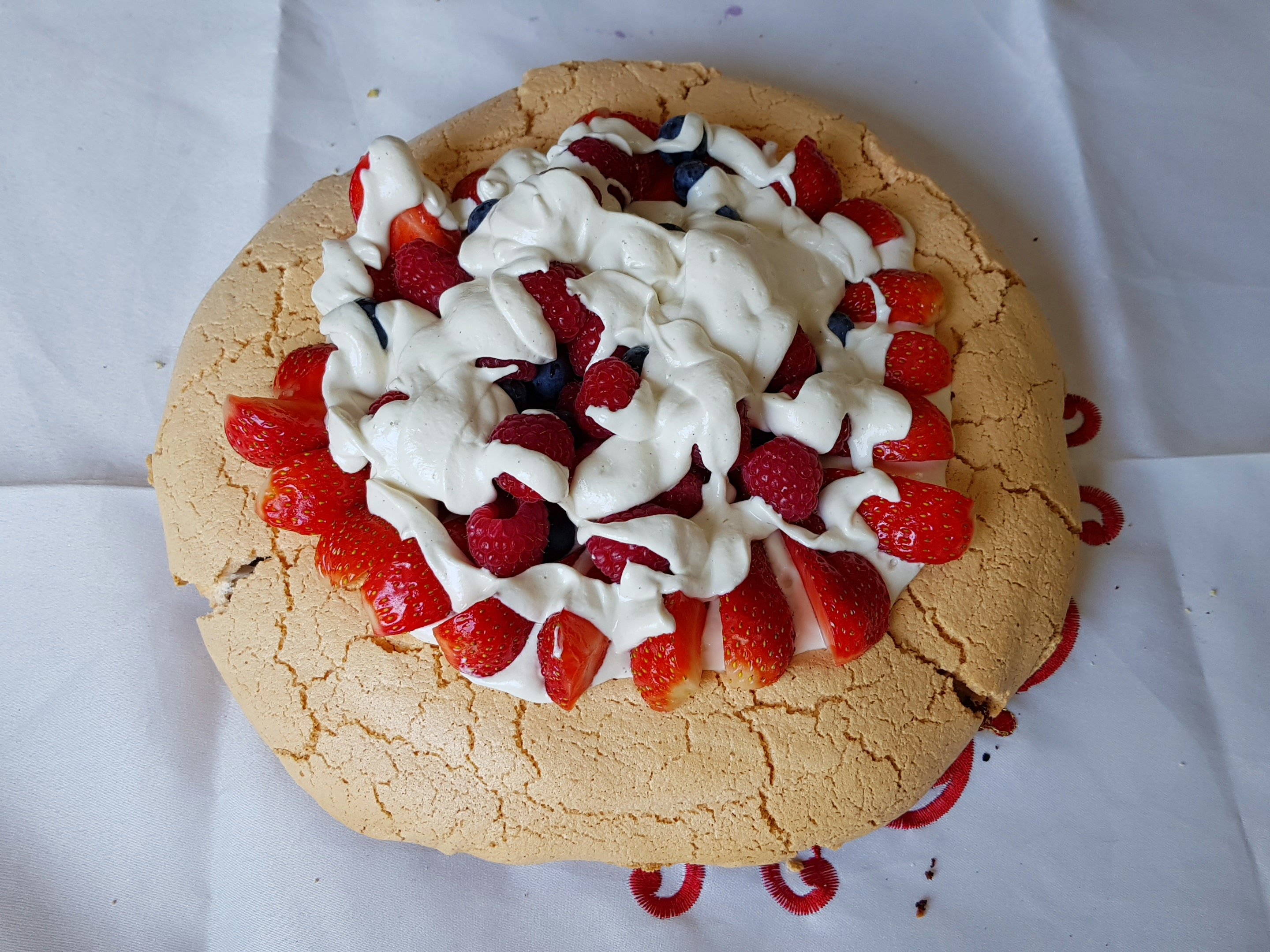 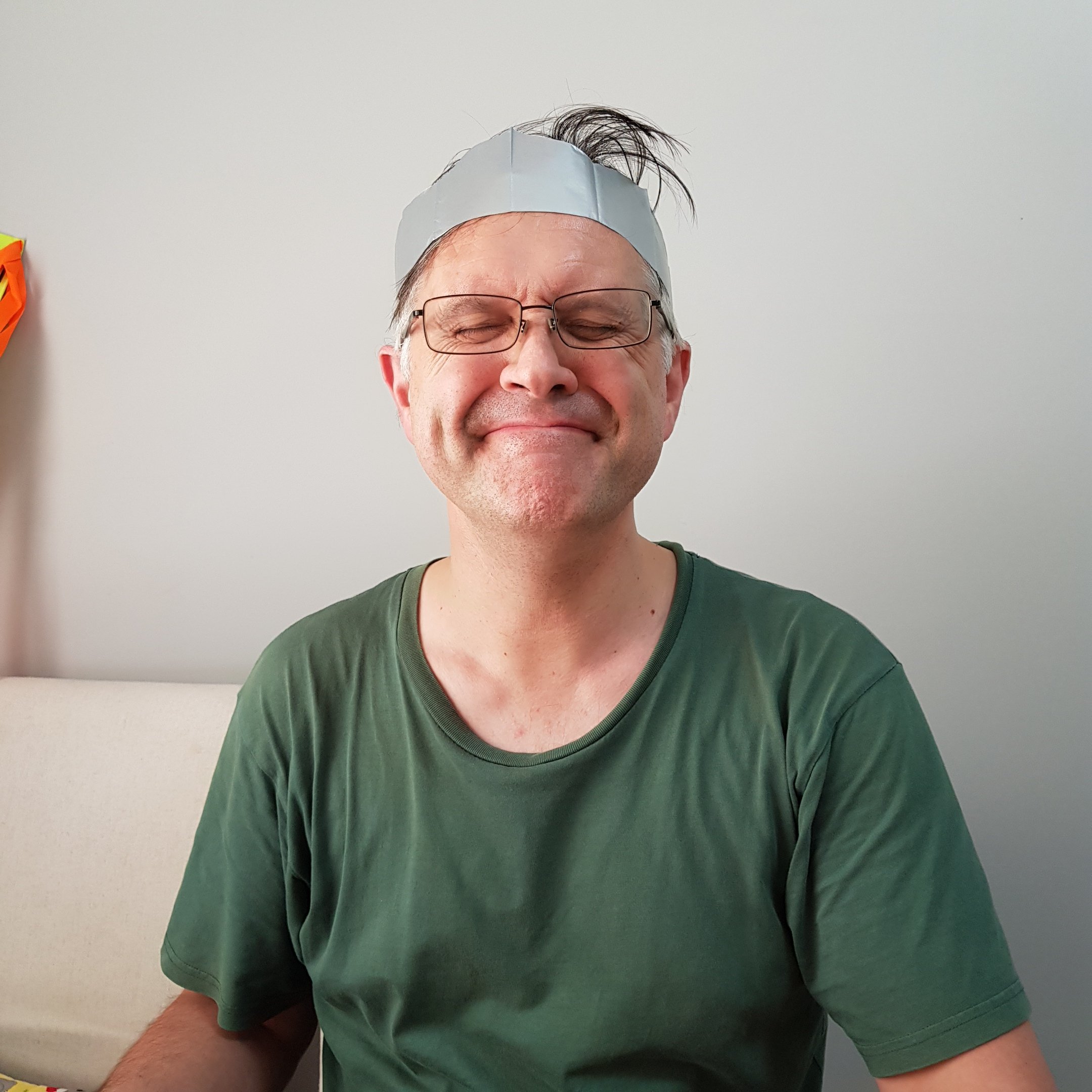 And his Christmas card from me… 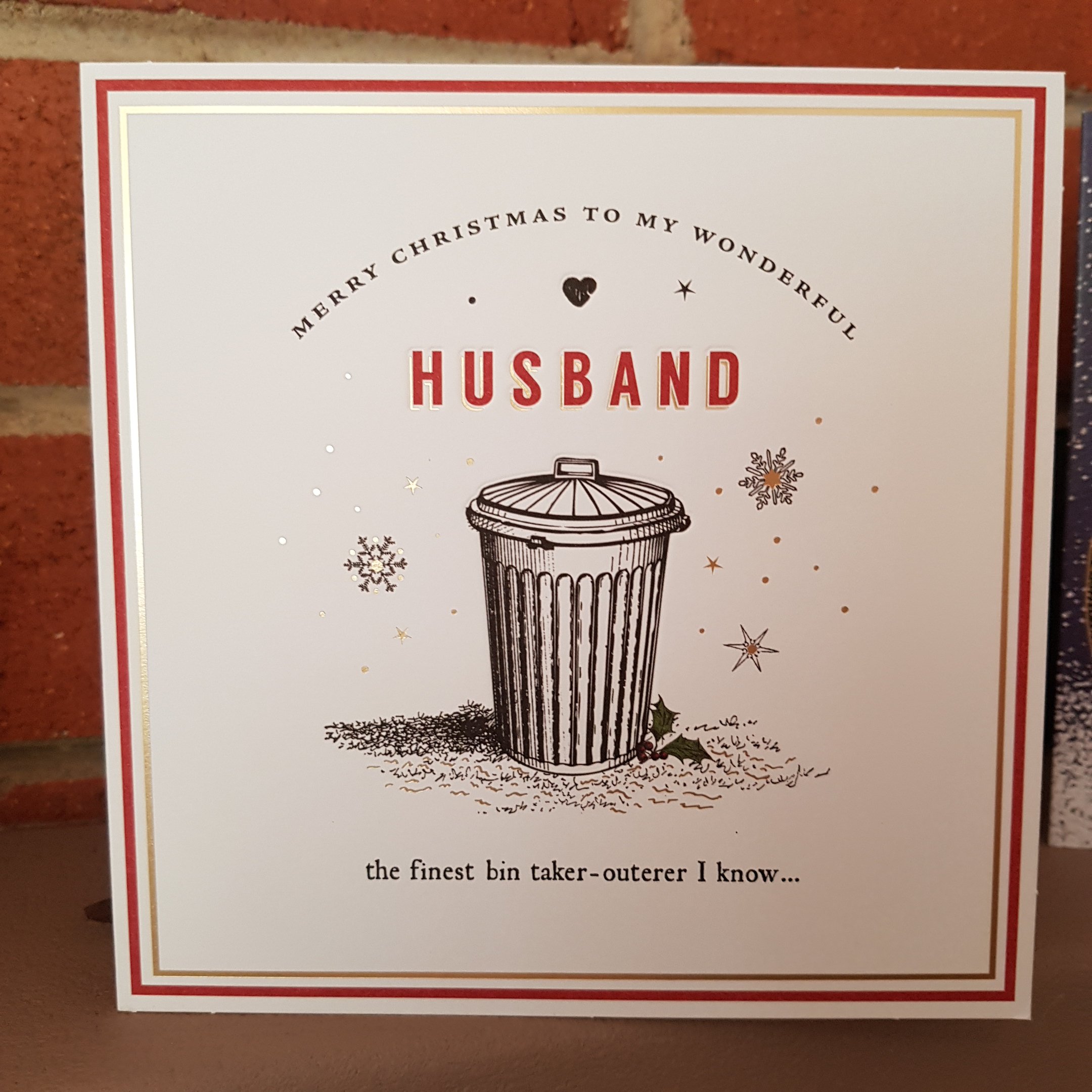 Then finally, a mock mirage sunrise. Now normally these are only ever sunsets, but I caught this one through the smoke from the fires on once if the clearer days. Look at the last couple of pictures. You’re seeing the image of the sun twice! 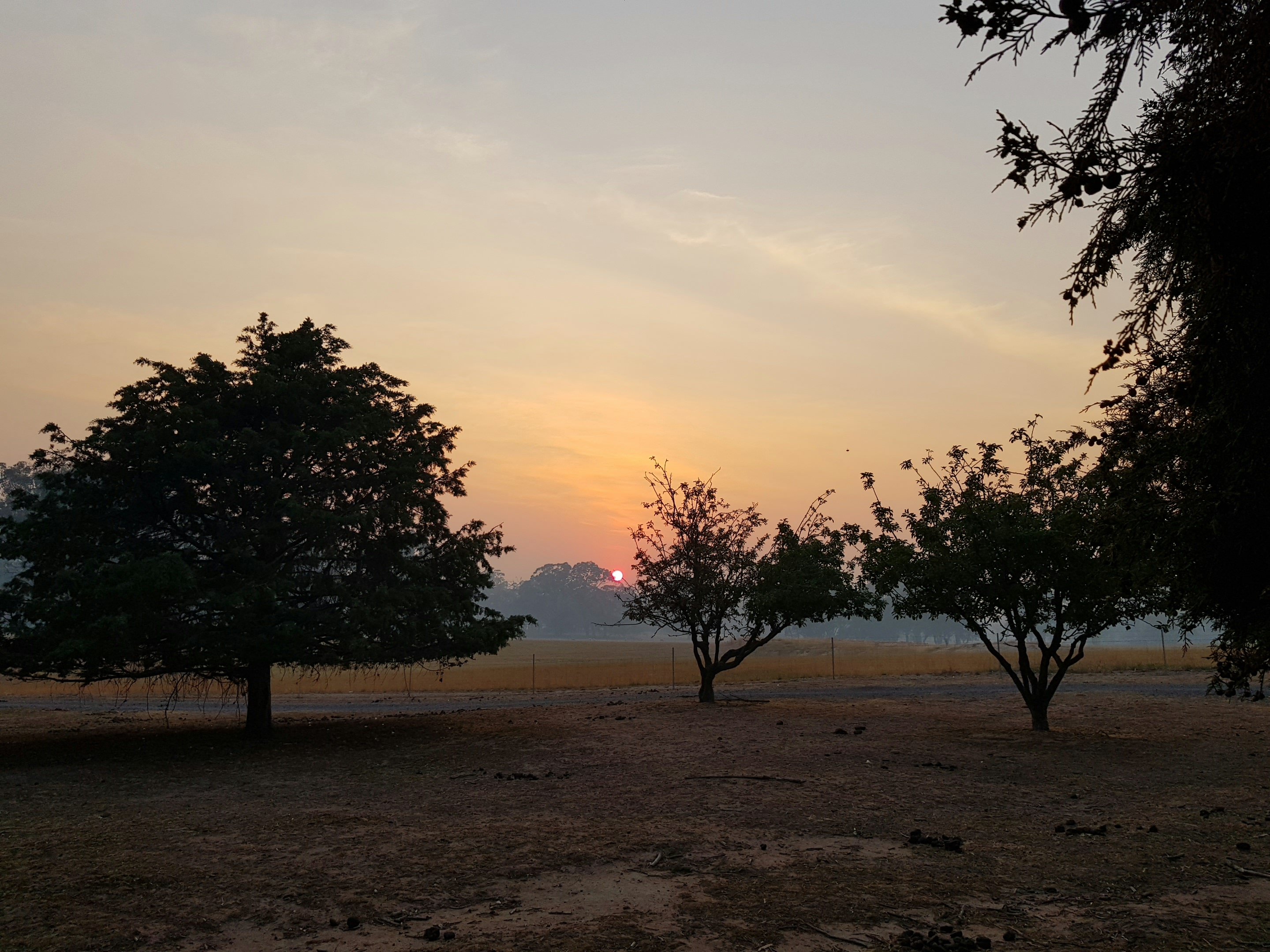 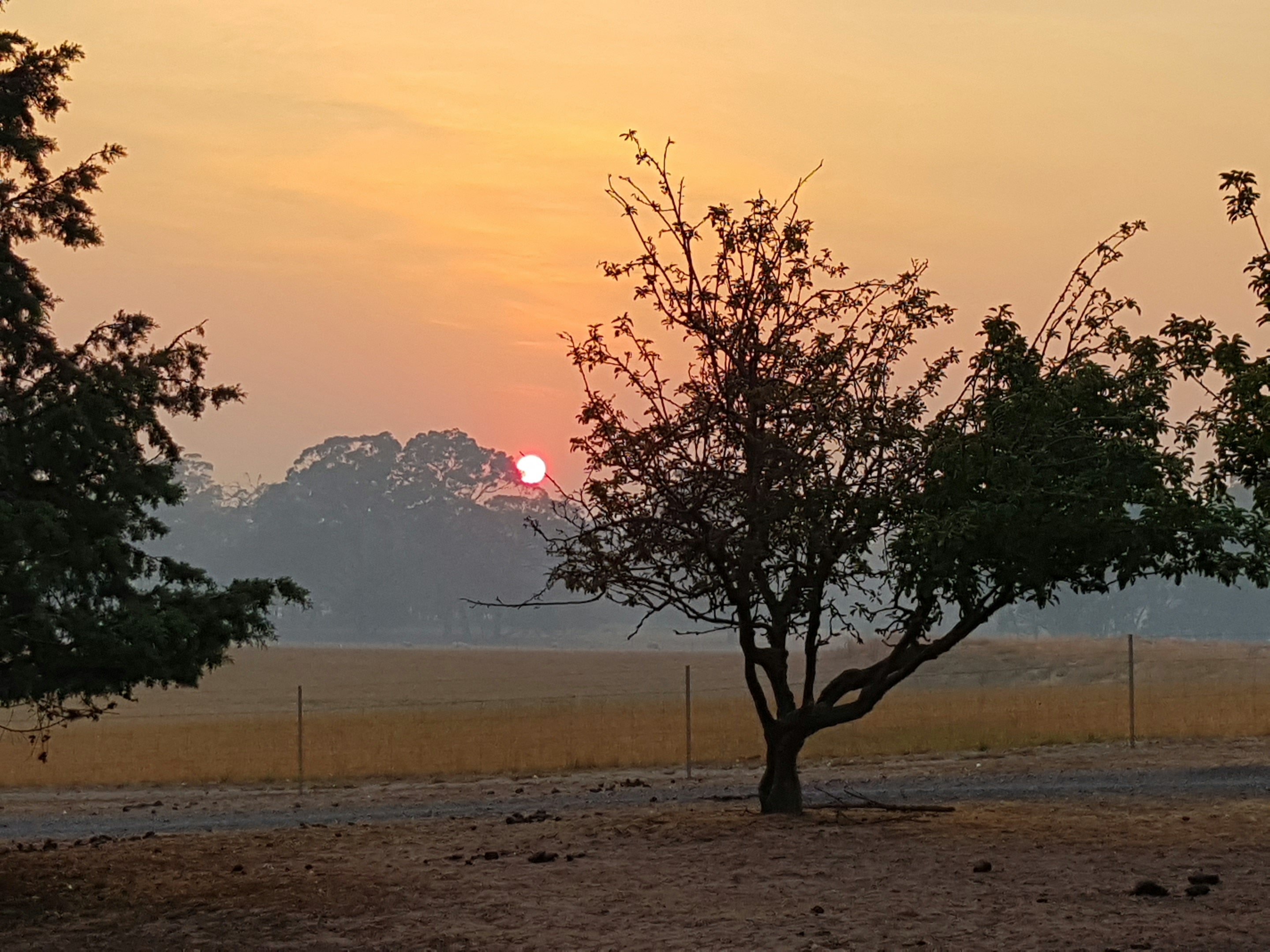 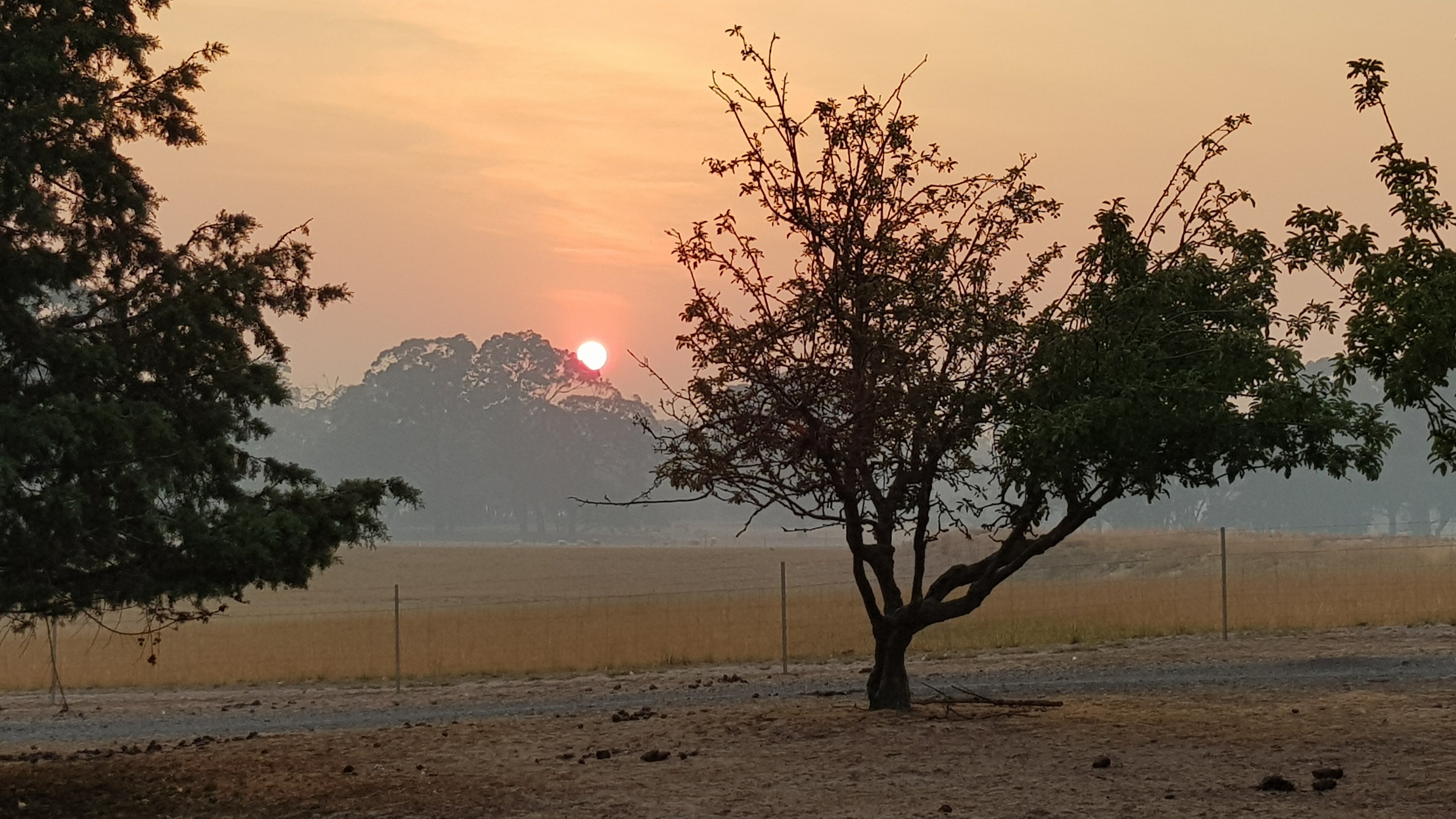 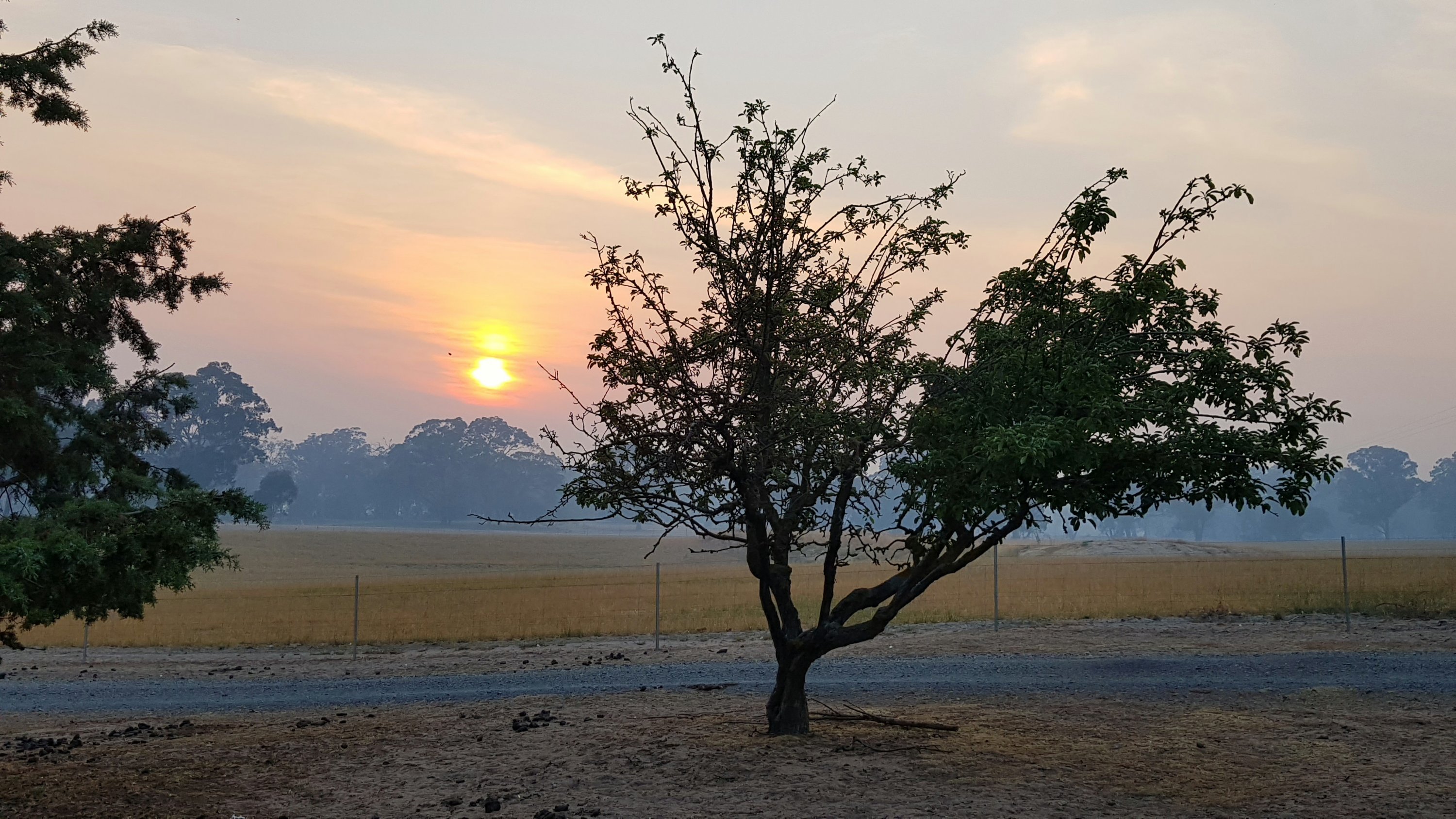 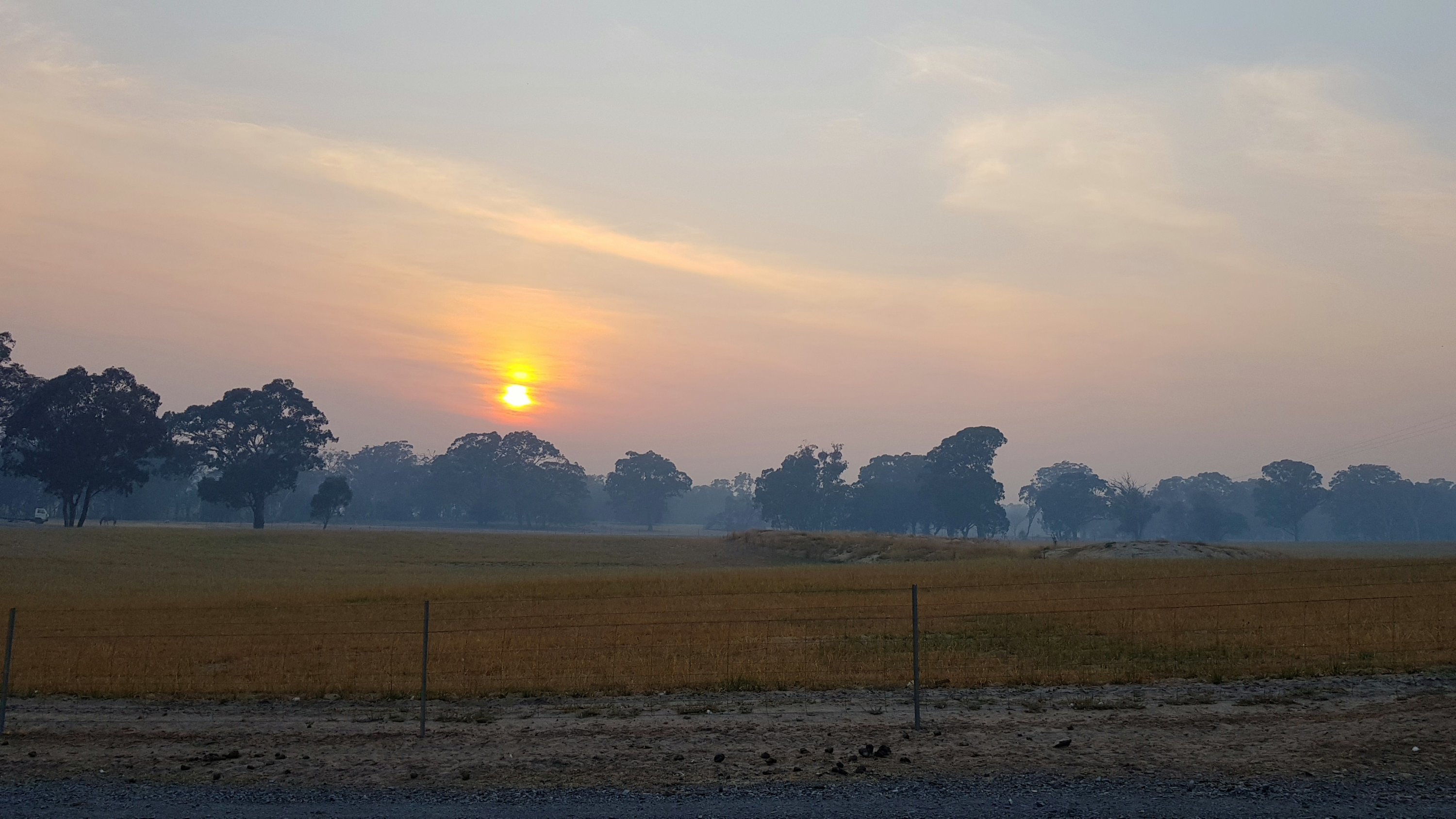