We’ve had a week of interesting weather. Let’s just call it that. Along witha few nice sunrises. Also something we haven’t seen since the beginning of December.

Stuart went to Melbourne on Sunday night and to get me out of the house, decided we would have a meal out on Friday when he got home. Good so far. And with him out of the house and one of our 6 monthly inspections due at the end of the mouth, I thought I’d get on with some of the cleaning that was needed. Cleaning such as wiping down every flat surface, cleaning the vynl floor and hoovering all of the carpets, I mean really hoovering getting into all those places normally missed including behind as much of everything to get at the dust on skirting boards. Even cleaning the fan in the kitchen/dining room.

That sort of cleaning.

Then we had some rain. Not much, just a mm or two. But in it was hail. And this hail was big. And not only that, there was enough of it to cause problems. We were fortunate. Both vehicles get parked under a really big fir tree which in summer especially can cause a few problems of its own such as sticky resin dropping onto the vehicle. Give it a week or two and it will harden and became brittle, but until then you can’t do anything except accept it is there. It looks like you either have a crack or chip in your windscreen or that you have a water droplet on the car screen. But it keeps both vehicles out of the sunshine which not only protects them but keeps them cooler than them being out in the direct sun. It also protects them from hail stones big enough to dent the body work of your vehicle and smash windscreens. Yep, you read it correctly. Several hundred vehicles in Canberra didn’t fair so well, including vehicles parked at the airport in the surface parking.

That was Tuesday I think. I watched it from the veranda sitting on the sofa as the rain came down. What I didn’t know at that point was that the rain was also coming in from the roof down the extractor fan outlet for the cooker. I met it on the kitchen floor on its way to the fridge…

Wednesday was a quiet day luckily and the weather wasn’t too hot, but it was hot. But it cooled down quickly in the evening and I was able to have the windows open all night with out problem. That hasn’t happened since the start of December!

Thursday started with a wonderful sunrise. It was giving away nothing in the way of what was to come.The heat that day was hot. But the air was clear and I was able initally to sit out with the chicks and let them explore. We even had a nice sunrise, one that I photographed because it had been a while since we had had anything worth photographing.

That is until it got windy. And it really did get windy. Before I knew it the wind was really bad and out of nowhere. It was ahead of a cold front coming through and suddenly we were in a dust storm, a bad one with high winds tearing branches off trees, or just bringing them down fuIIstop. Dust was being blown into the house everywhere and I mean everywhere. And not just in the usual places. I started on the stuffing J clothes Into cracks routine trying to minimise the cleanup job…

It is still going to take a lot of cleaning up again. And that night brought much needed rain. 3mm. Not a huge amount, but enough. Luckily this time I was ready for it with a big bucket on the stove to catch the rain coming down the extractor fan and over the cooker…

And with those high winds came problems other than dust storms. The very high winds escalated a number of fires and also brought down power lines causing more fires and grounding all flights in to Canberra because of a new fire starting and being fanned by the wind. At one point the airport was closed to incoming flights with outgoing flights only in an effort to get planes to safety presumably. Then the airlines stopped all flights full stop. The fire and smoke from the fire were causing problems and at one point had crossed the road and was burning in the business park alongside the airport. For a while it looked bleak.

It is also a bad day with other fires. 6 in total were escalated to Red which is emergency and that very Australian line we’ve come to hear all too often just recently: “take shelter, it is too late to leave” basically you’re on your own getting through this fire. It also brought the sad news of the deaths of another 3 firies, this time in the loss of a water bomber in the Snowy Mountains.

We left Thursday not knowing if Stuart would get have from Melbourne, at least have to Canberra that was.

Friday was a busy day. I was in Bungendore in the morning and with quite a few things to get done it meant all morning.

Most of the dust in the atmosphere had settled following 3mm of rain overnight but you couldn’t see the wind turbines which always gives you an idea on air quality and dust or smoke ash levels. The guy came to look at the cooker and the extractor flue and did some repairs on the roof. The day only reached about 32°C so felt relatively ‘cool’. I was able to pick Stuart up off the plane and we grabbed pizza and chips at the Greek takeaway in Bungendore on the way home. Spring is well and truly happening. My wonderful yellow rose is trying to flower. 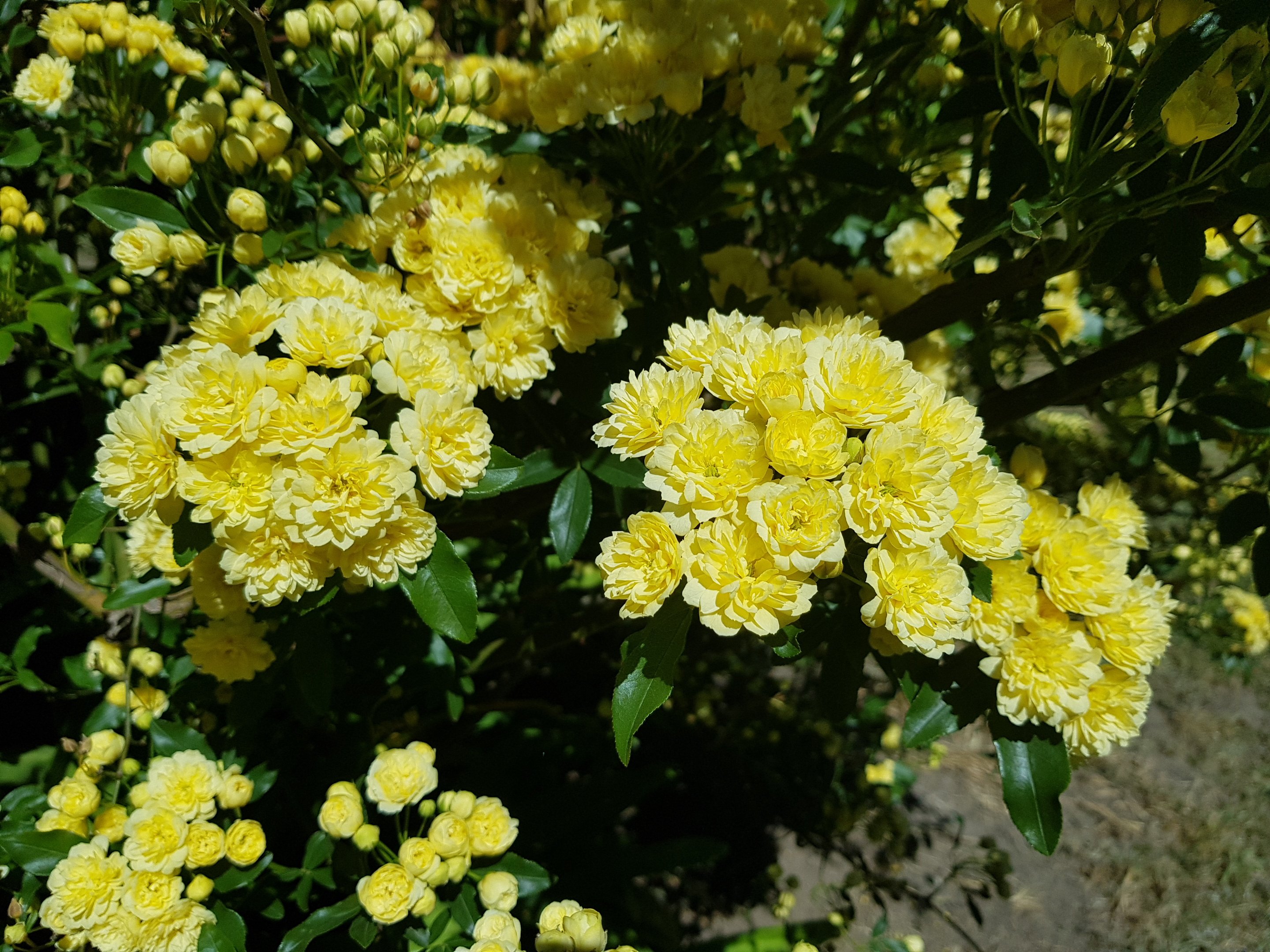 The bottlebrush is just showing the first flowers, but I think the main display is a few weeks off.

The lawn has flowered magnificently much to Stuart’s dismay! Known as Cape Daisies, they make up much of the lawn. 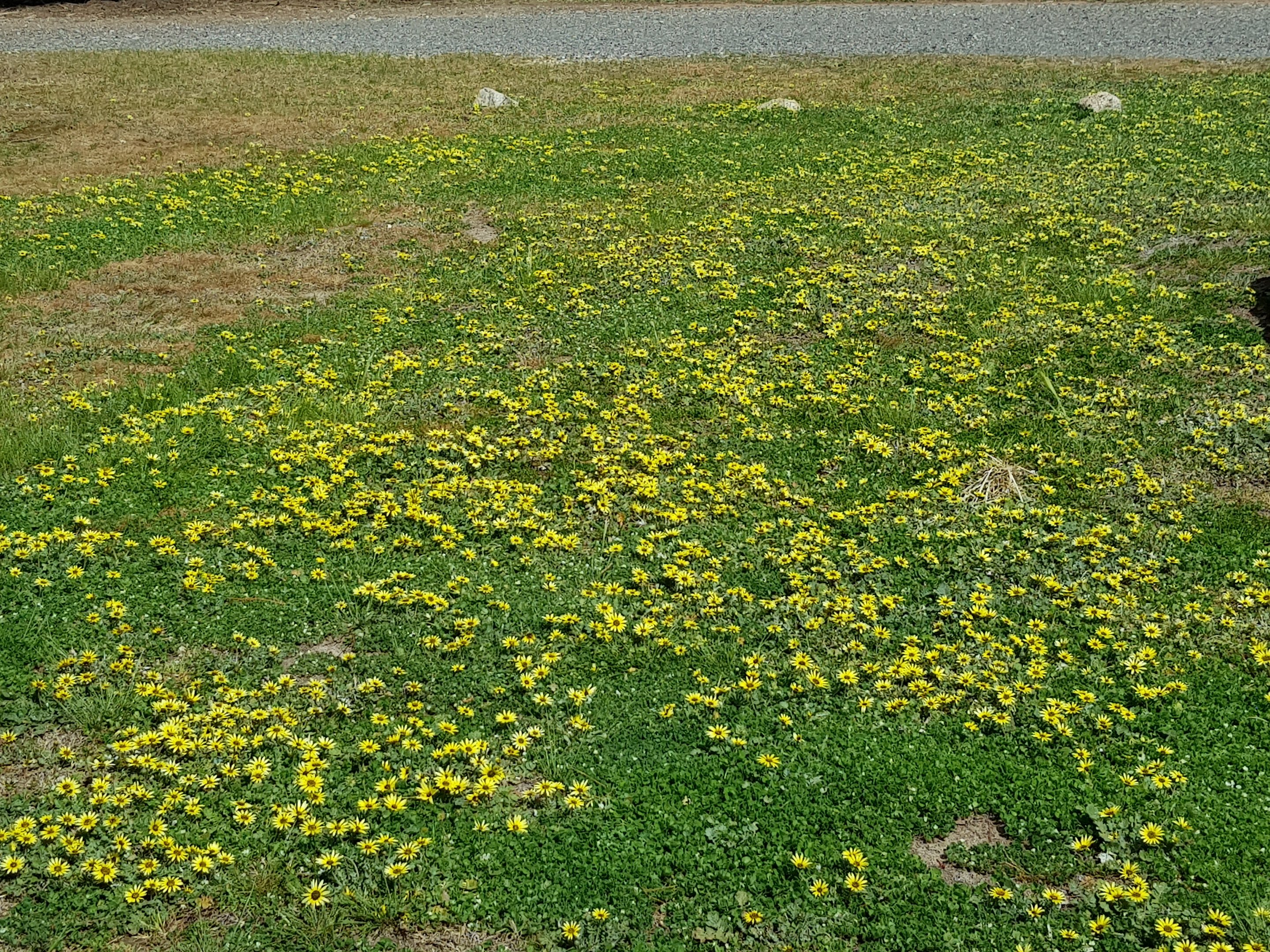 And my lavenders are in full bloom. The grape vine is a mass of leaves and buds.

The apple, apricot, pear, quince and still unidentified soft fruit with a hard stone (most likely peach or nectarines) have all had their sudden flurry of flowers and are now starting to leaf (or grow more in one case, out leafs before it flowers).

The Jasmine is probably no more than a week away from full flower, but already smells heavenly at night when it is still. The family of weebills are raising yet another brood in it again but this year have made no attempt to hide the nest. 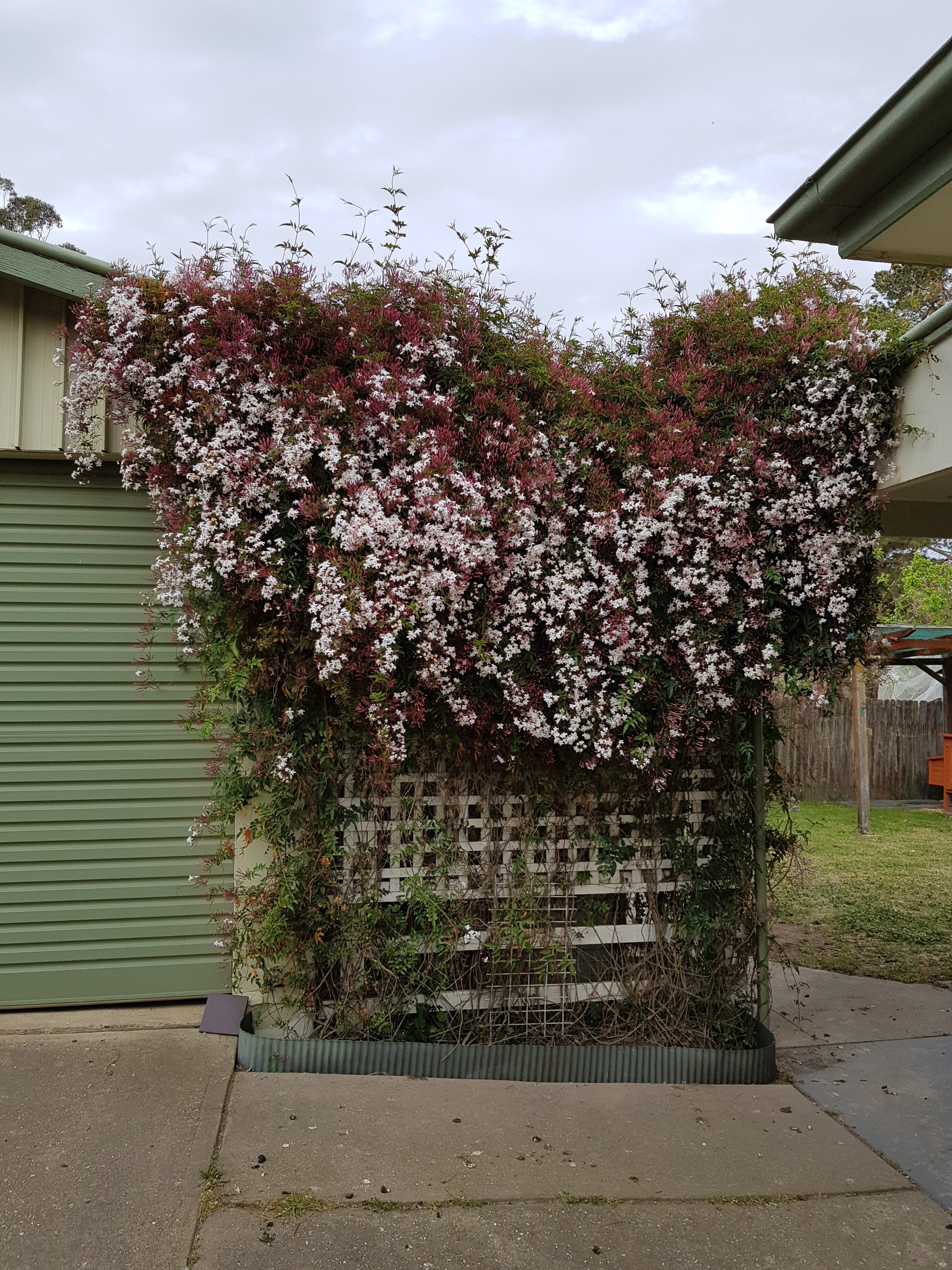 We’ve moved some of the agapanthus from deep under a pine tree where it was really struggling from lack of water, to under the 2 main bedroom windows. It still gets little to no water but it is where we empty our grey water to and where I’ll be planting courgettes and squashes very soon. We keep on getting warmer and warmer spells but each weekend it drops again back to frosts overnight. So, this week started with the fire lit on Monday morning because it had been only 3°C overnight, but by Tuesday it was 26°C and yesterday was 33°C. The forecast is for another 3°C again on Monday morning, so we’re not yet out of the woods or no longer needing it when it comes to planting out my seedlings into the veg plot or to no longer requiring a fire!

The only thing that is definite is that water is going to be a very precious resource this year. We’ve had very little rain through Autumn, Winter or the start of Spring and the water table is very low.

I’ve found a lovely unknown and unidentified flower at the bottom of the garden, hiding behind both quince trees. 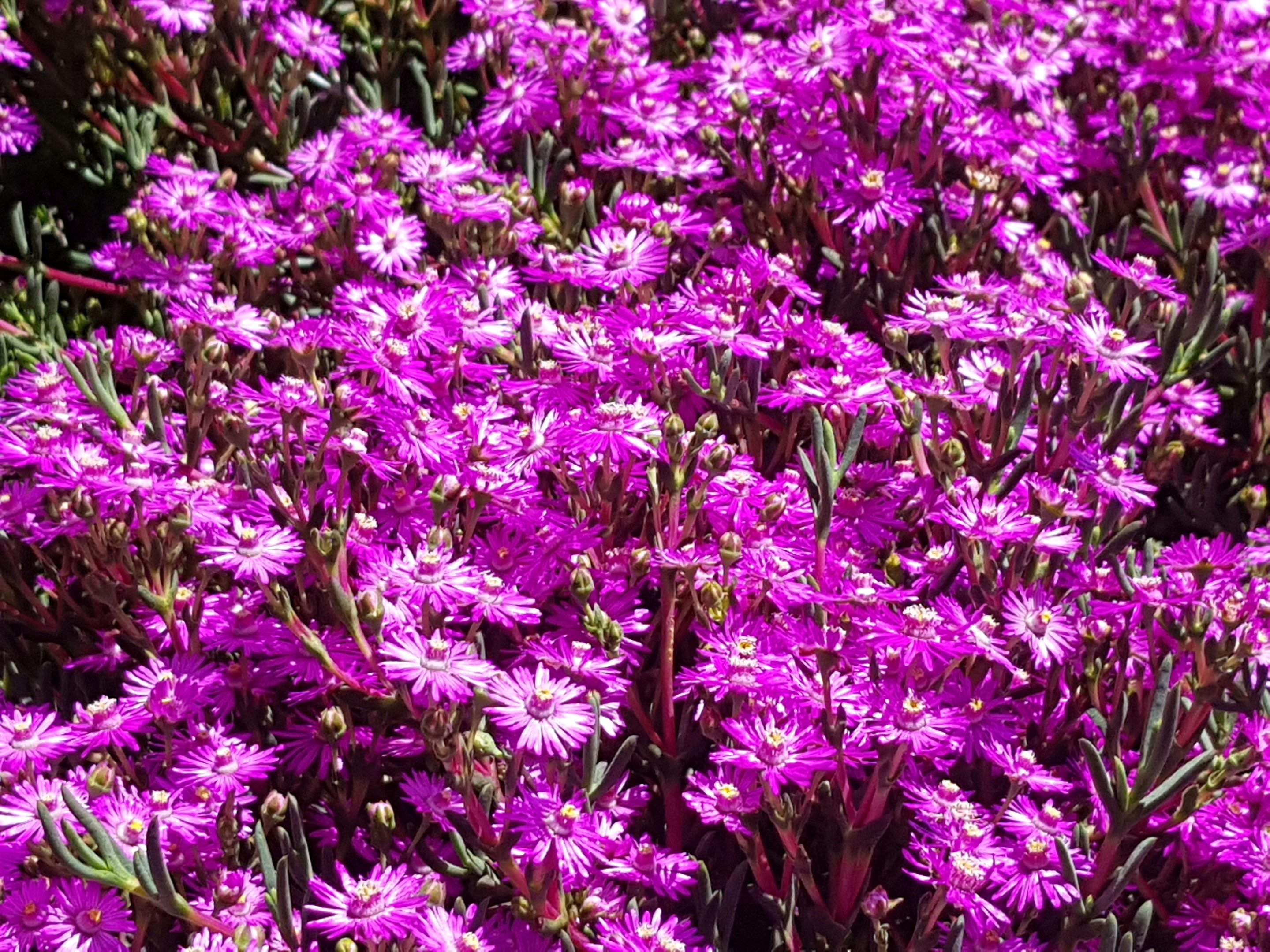 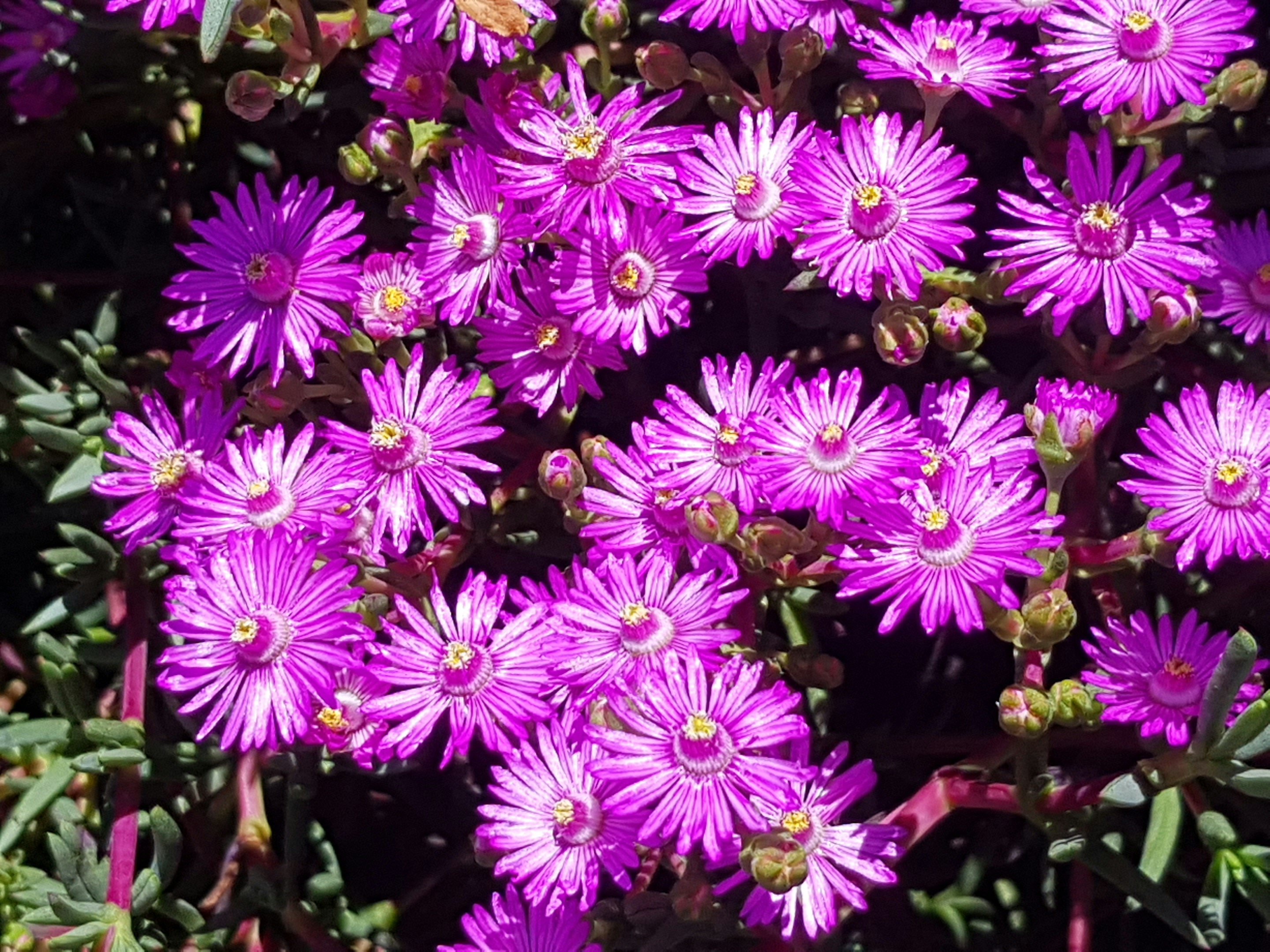 All I know is that it is a succulent so I may try to transfer some of it to the stone circle in the front lawn.

We’ve been having some interesting weather but usually without rain. It’s happened elsewhere as in these 2 pictures taken a day apart on my daily walk to the letterbox. 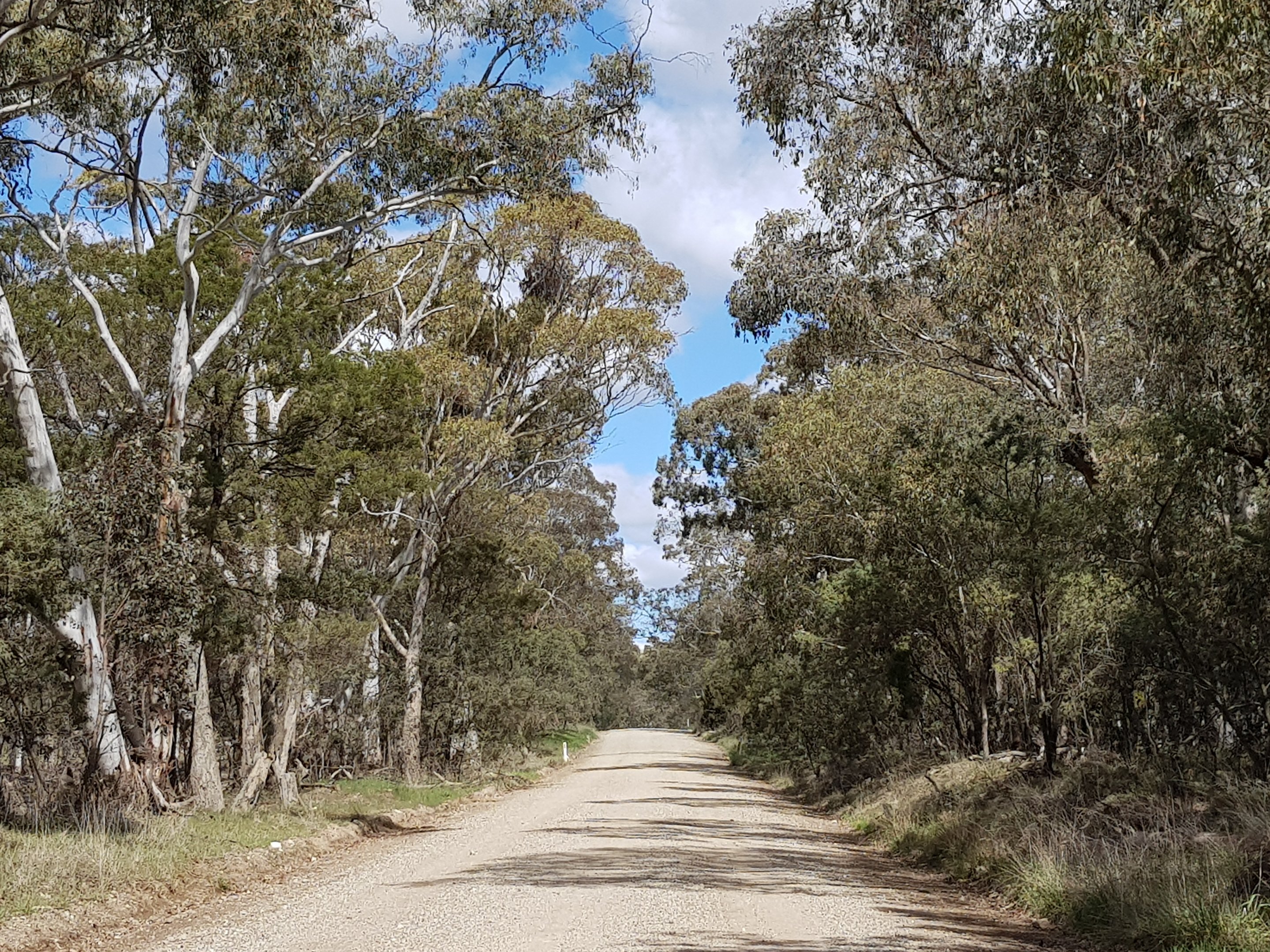 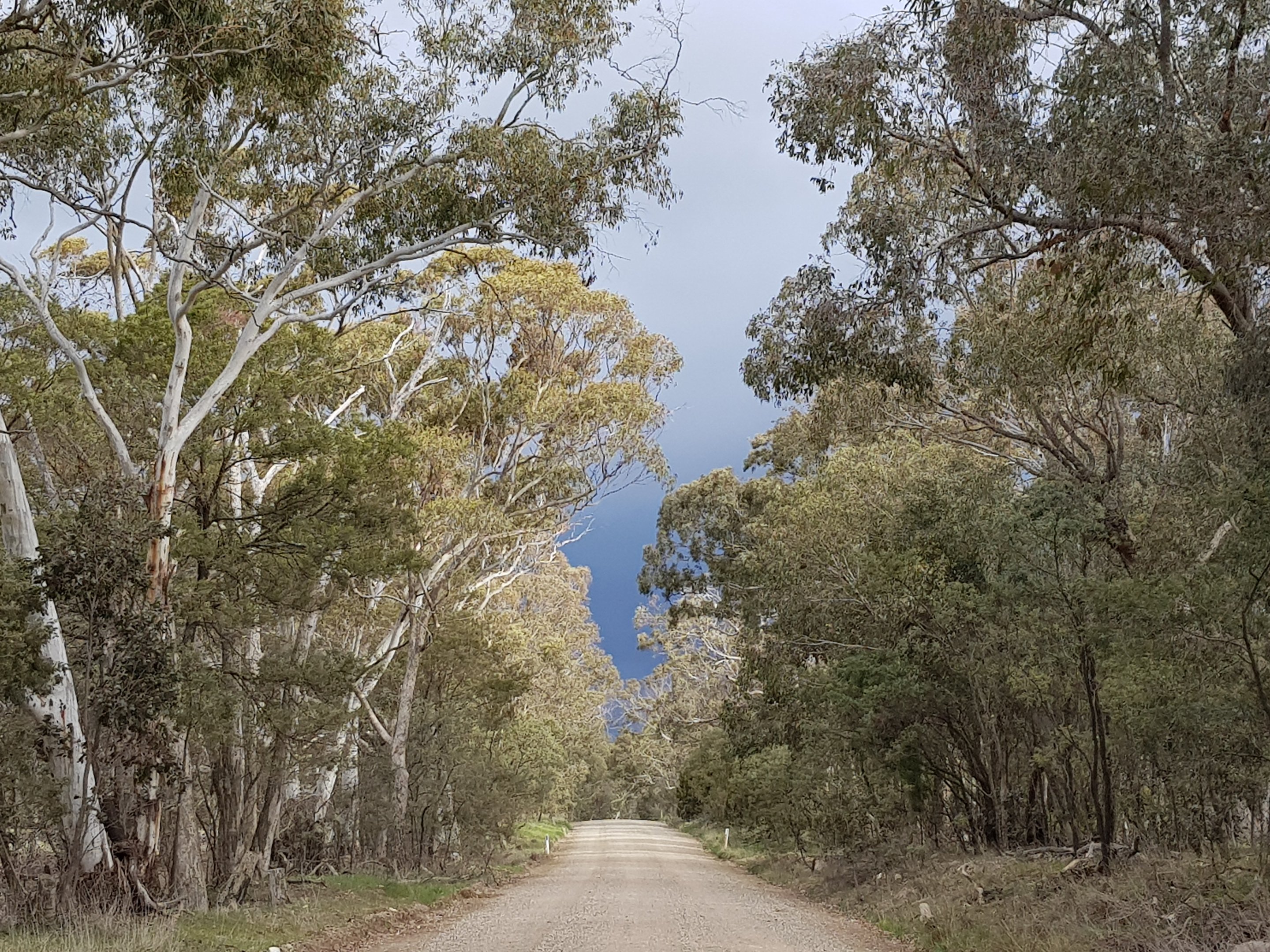 And one of my chickens had taken to joining me when she can! 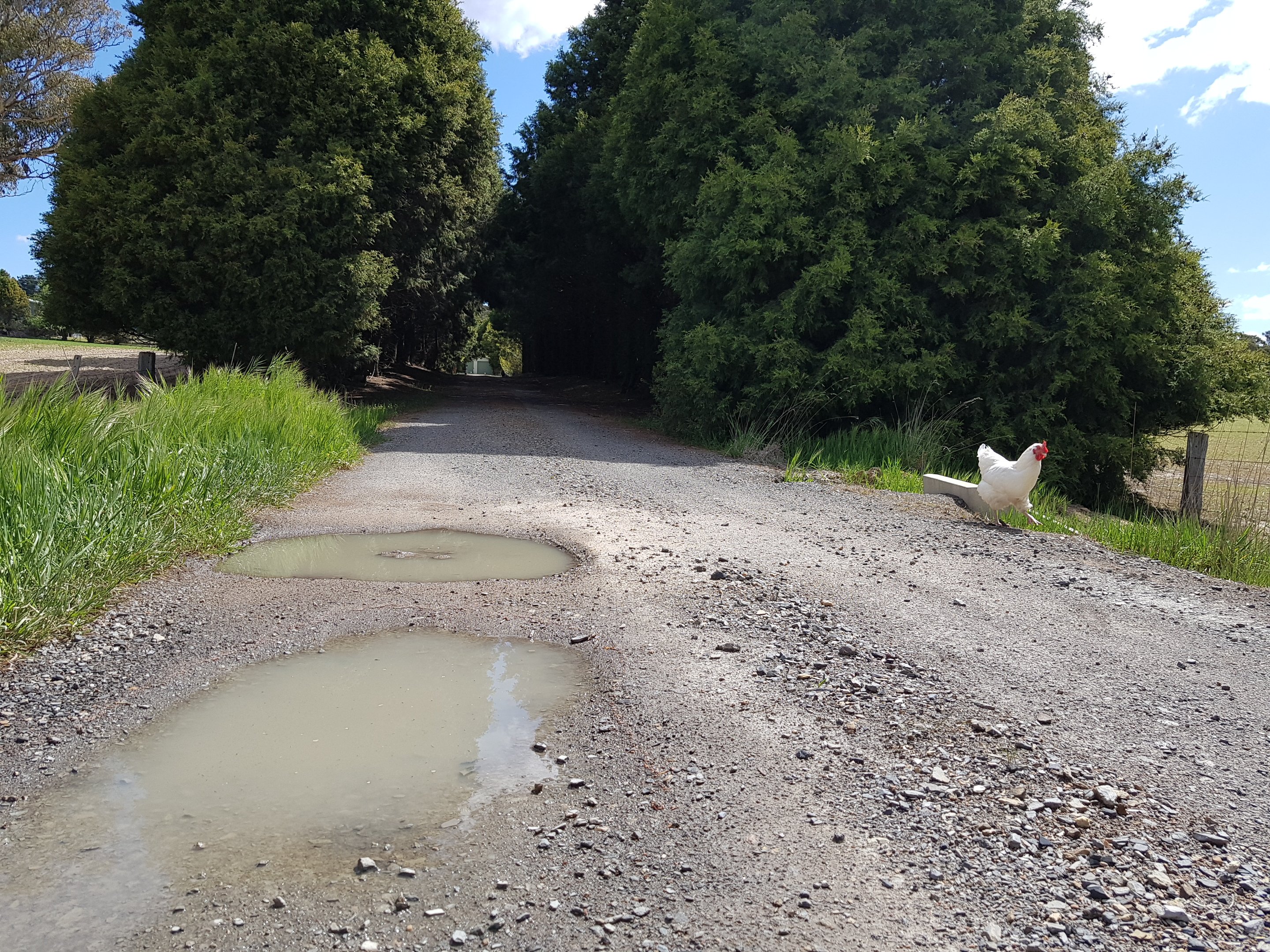 I have even met her at the road but she always follows me back home again at a brisk run.

We did spot water on Lake George on one occasion, but otherwise it remains dry.

A sharp comparison to when we first moved here back in winter 2016.

Other photos I have added include some sunrises 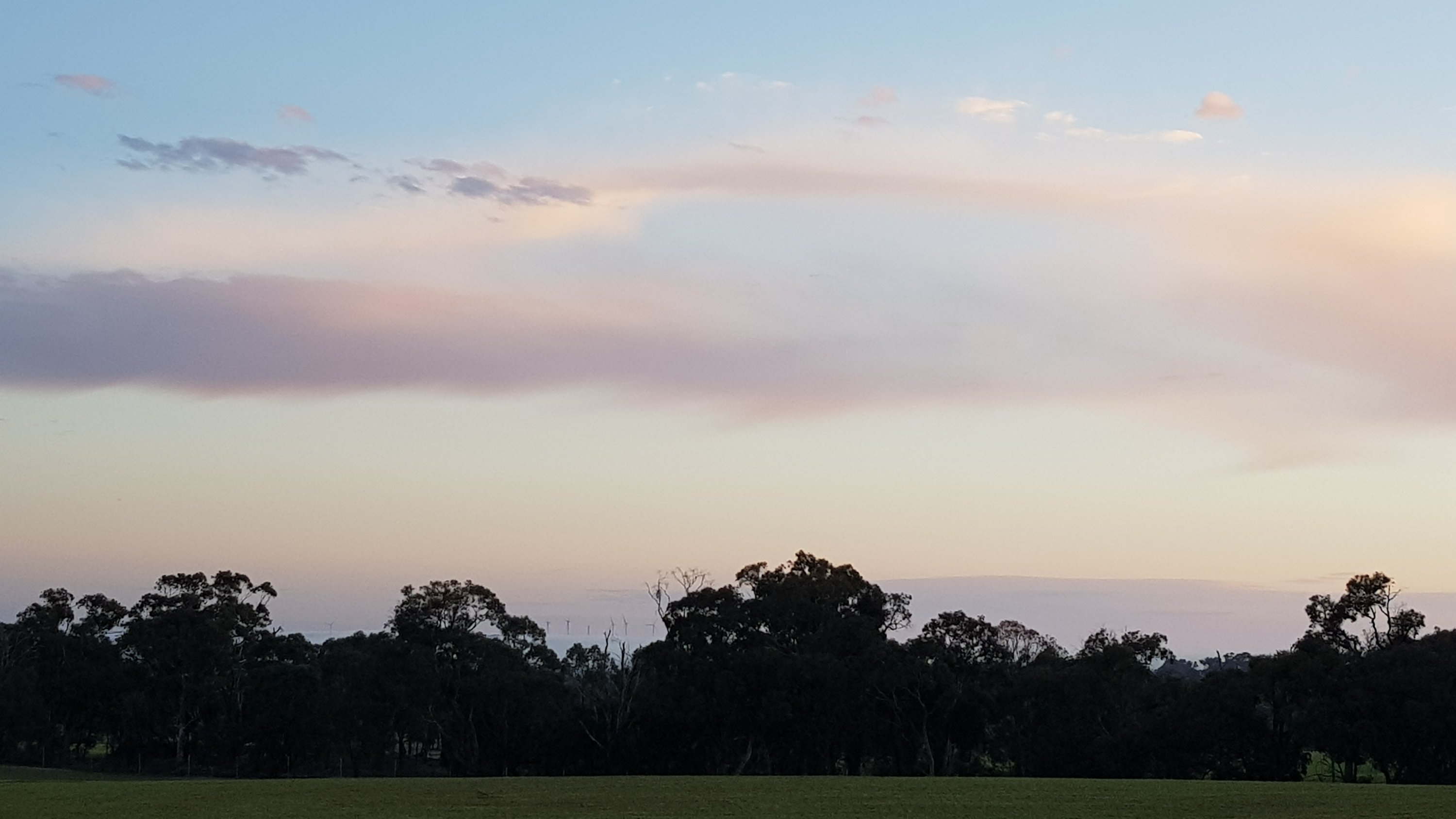 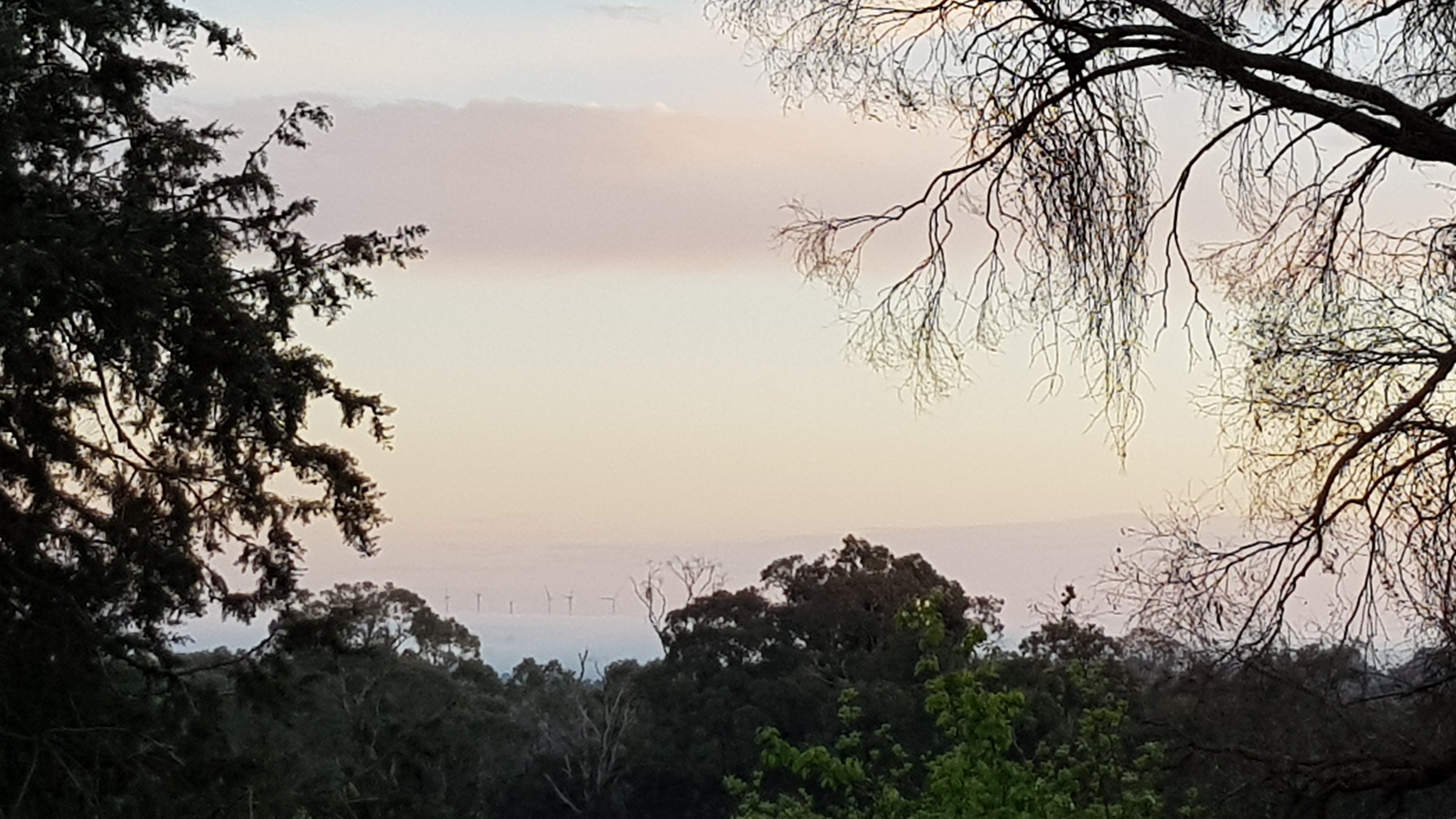 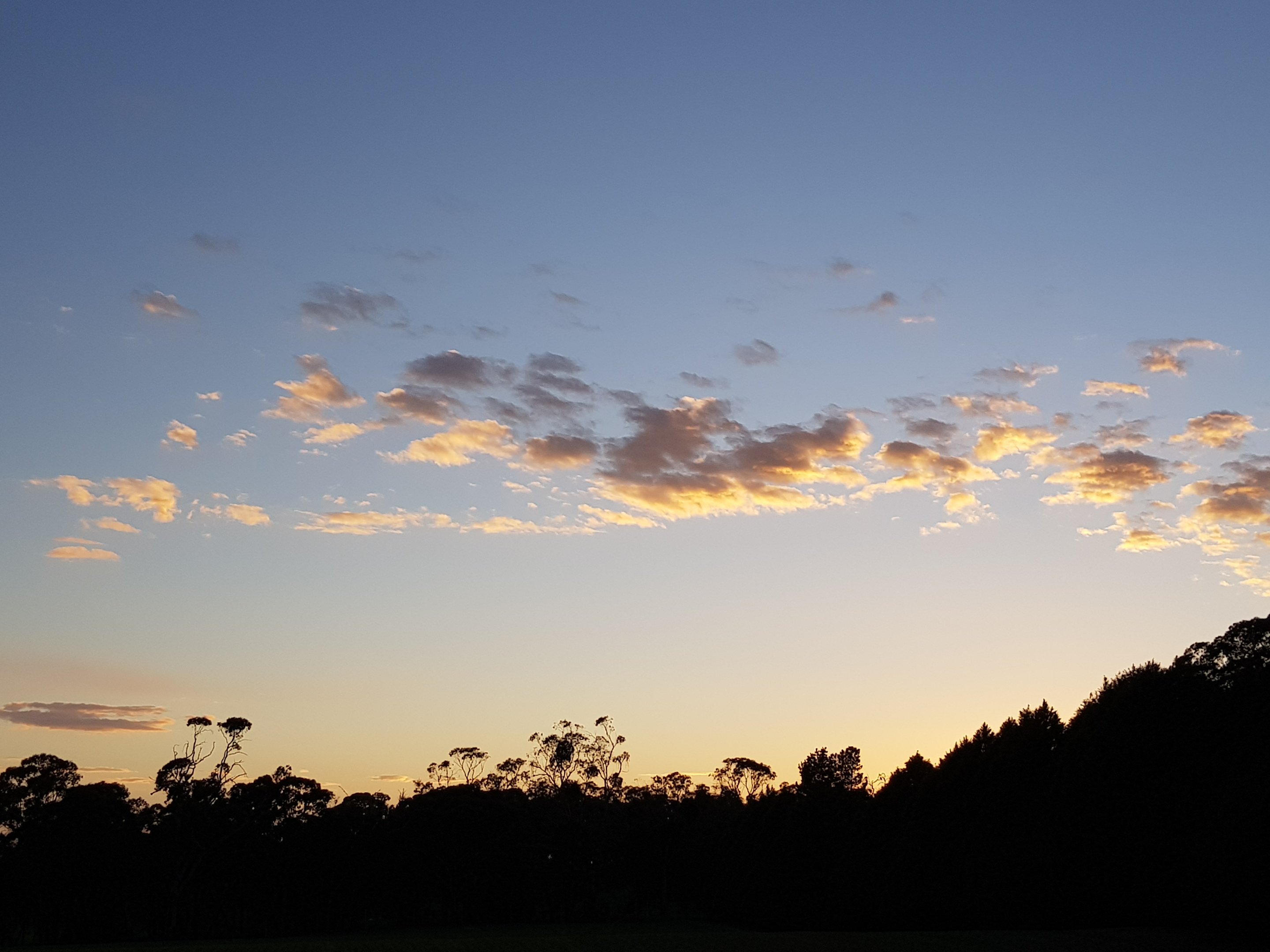 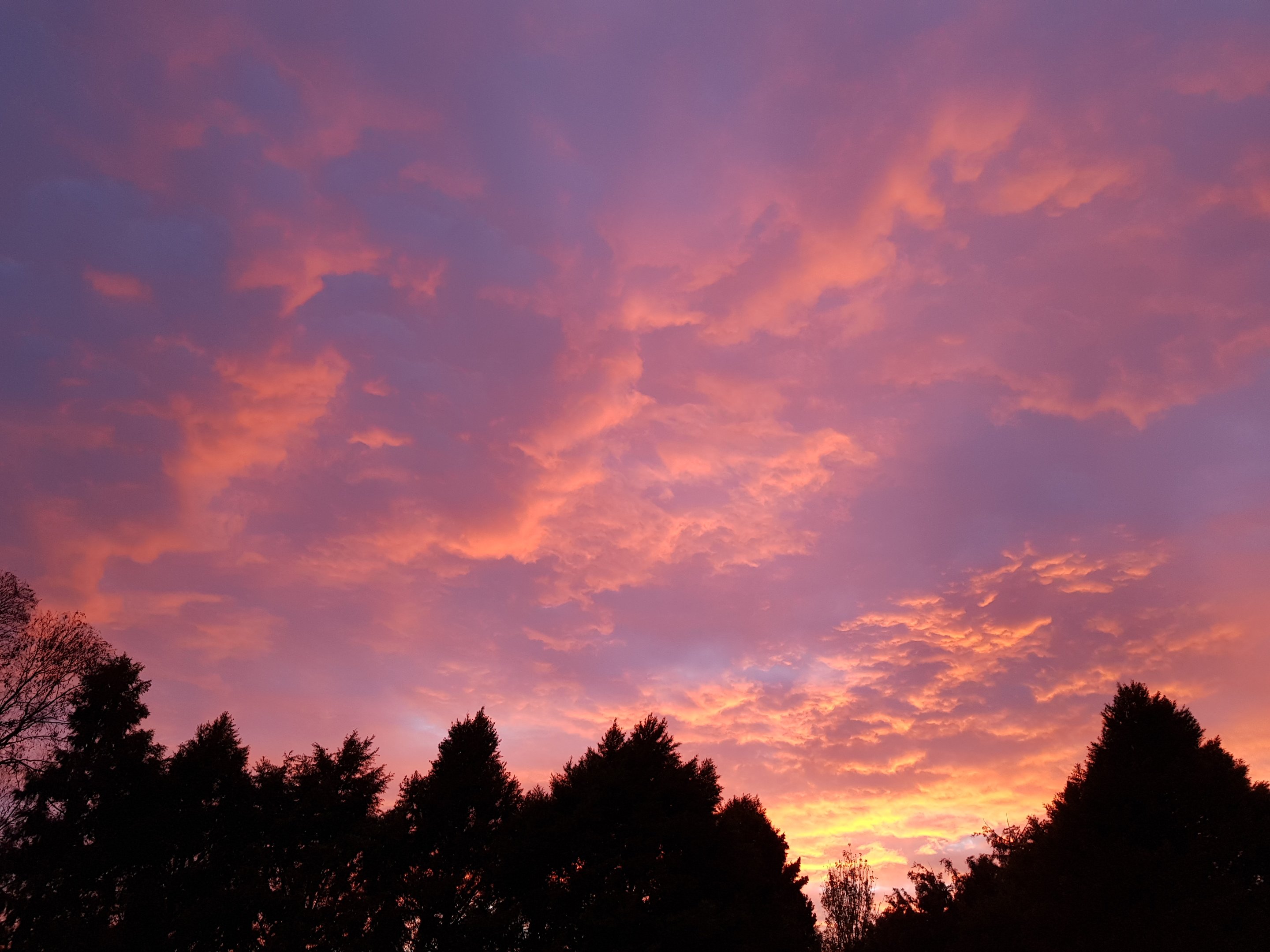 And a few shots of flowers at a roundabout in Canberra.

Otherwise I’ll leave you with this wonderfully atmospheric shot of a sunrise a week ago. 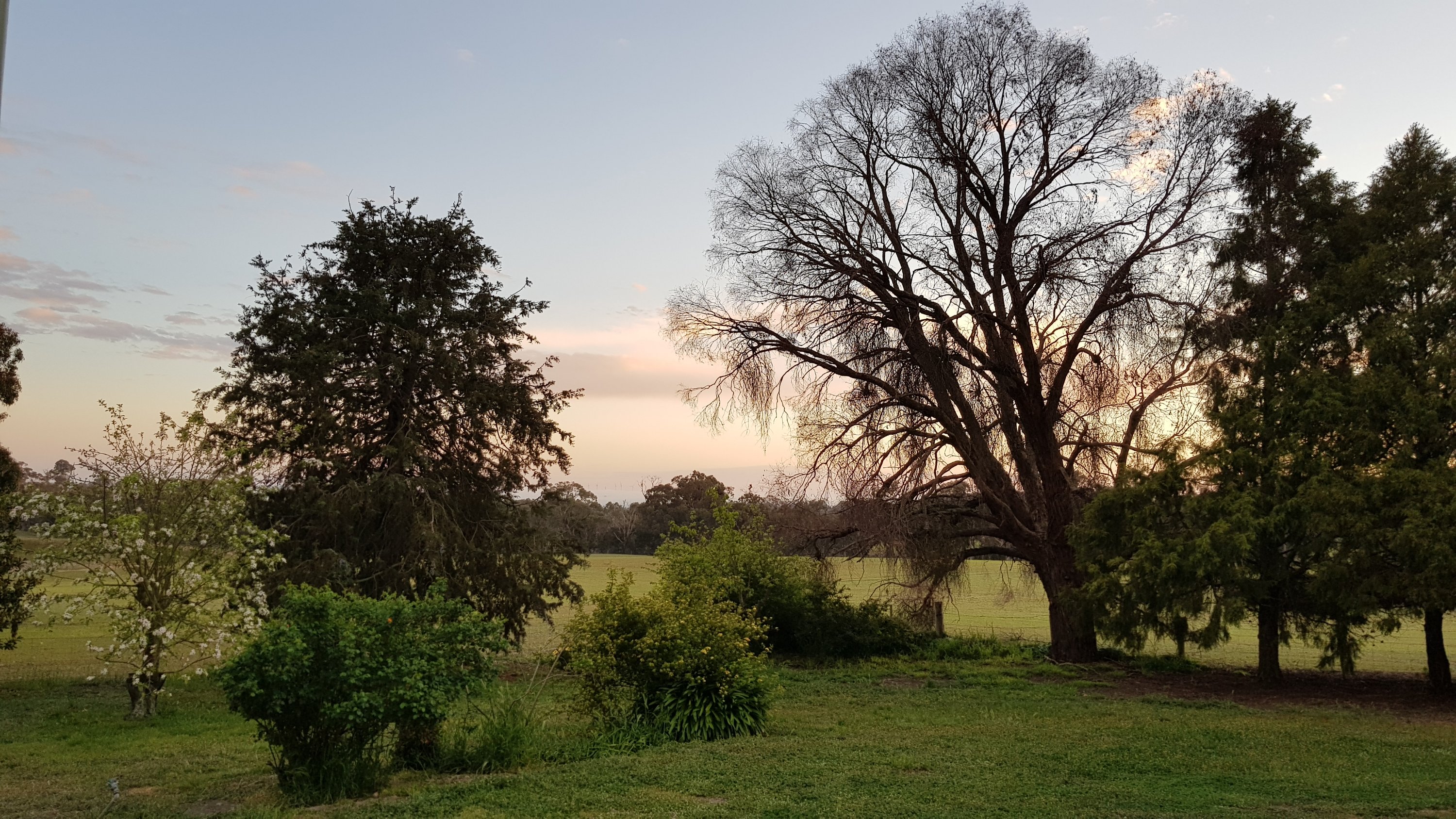